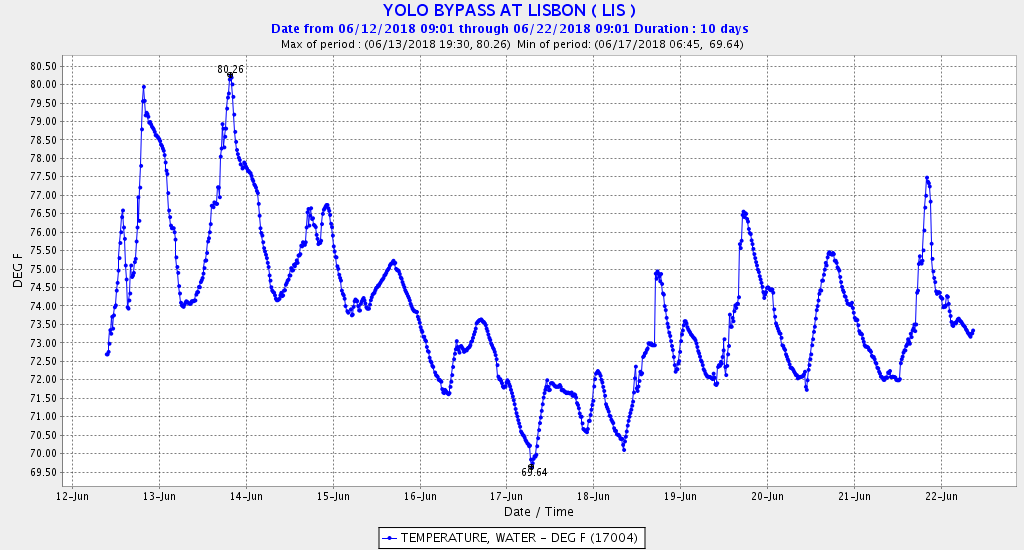 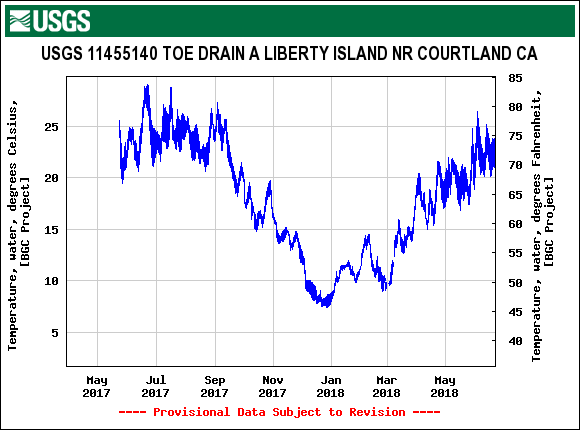 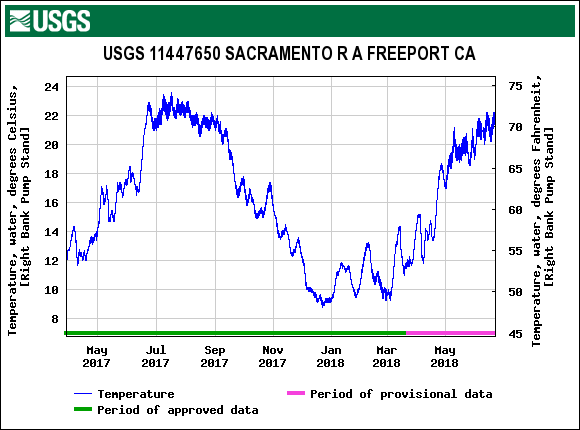 Water temperatures in the lower Sacramento River over the past month have often exceeded water quality standards that protect salmon and other beneficial uses (Figures 1 and 2).  Water temperatures at or above the standard of 68oF adversely affect adult and juvenile salmon.  Water temperatures can meet the standard if the Bureau of Reclamation maintains flow in the Sacramento at Wilkins Slough at 6000-8000 cfs, depending on air temperature.  The Bureau of Reclamation has maintained such flows in the past to meet water quality standards and terms in its water rights permits (Figure 3).  Shasta Reservoir water storage is 102% of normal as of June 18, 2018.  Water diversions from the Sacramento River upstream of Wilkins Slough are approximately 6,000 cfs, with 100% allocation to CVP contractors under water right permits.  For more on the effects on salmon, see past posts. 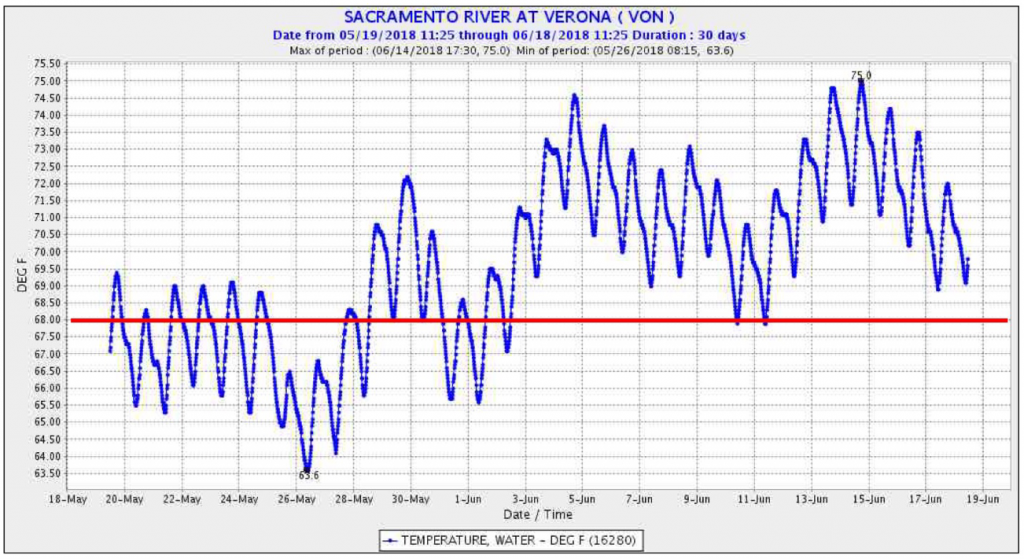 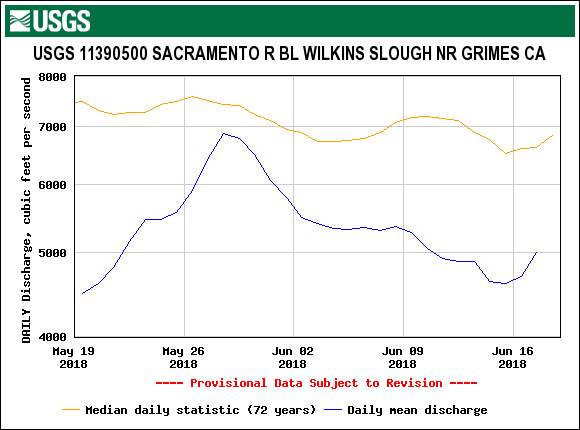 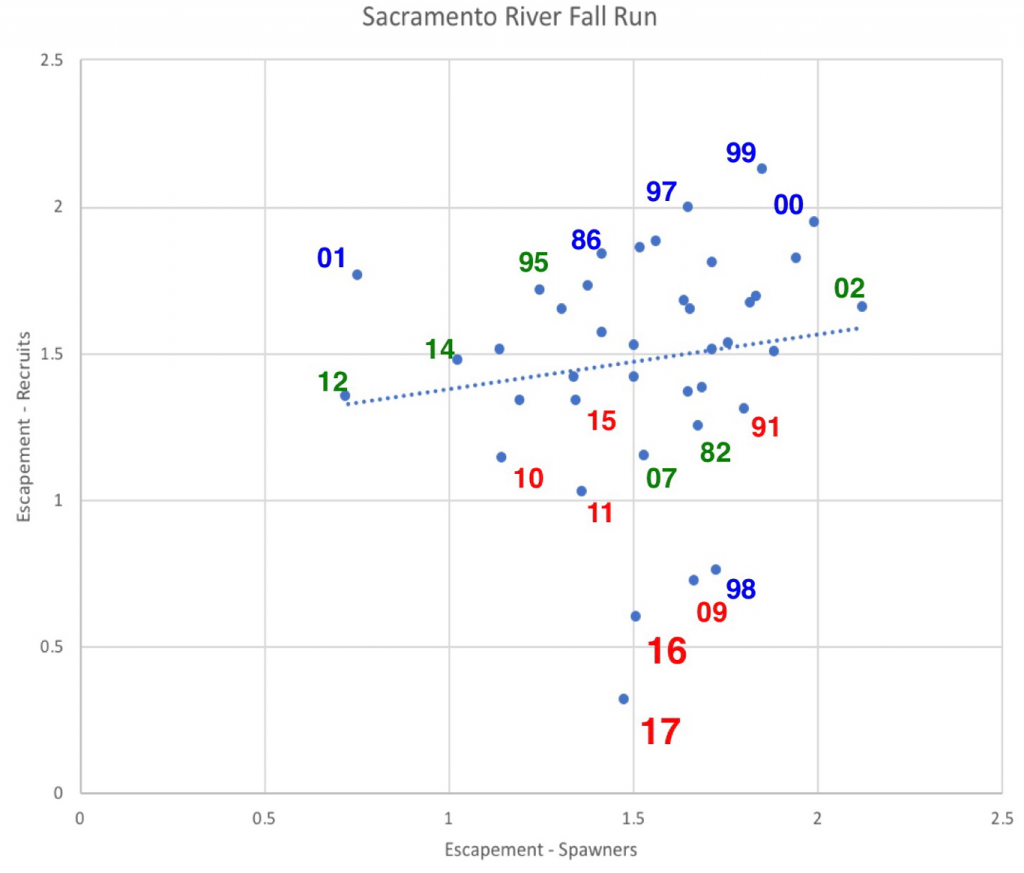 The proposed Sites Reservoir1 would be a new off-stream storage reservoir covering 12,000 -14,000 surface acres with 1.8 million acre-ft of storage capacity on the west side of the Sacramento Valley (Figure 1). The project would capture and store unregulated Sacramento River winter-spring runoff and some water previously stored in Shasta Reservoir. The diversion capacity to the reservoir would be 5400-6500 cfs, supplied by two existing river diversions (up to 1800 cfs at Red Bluff; up to 2100 cfs at Hamilton City) and a new diversion near Colusa (proponents are evaluating alternative capacities of 1500 and 3000 cfs, in addition to the currently preferred capacity of 2000 cfs). The Sites Authority webpage estimates that it could have diverted over 1 Million acre-ft to storage in Sites in 2018 and 1.8 Million acre-ft to storage in 2017; these figures assume bypass flow requirements at the diversion points and at Freeport, and sufficient storage capacity in the reservoir. The Draft Environmental Impact Report/Environmental Impact Statement (DEIR/DEIS) for the Sites Reservoir Project estimates the average annual diversion to Sites storage at about 500,000 acre-ft; actual diversions would vary depending on hydrology and regulatory constraints.

As an off-stream storage reservoir, Sites would store water behind a dam that is not on a major waterway. Water diverted to the reservoir would be pumped into canals from the Sacramento River, and then pumped into the storage reservoir from small holding reservoirs on the canals. The two existing diversions that would fill Sites have modern fish screening facilities. As currently envisioned, a pump-back hydroelectric operation would allow partial recovery of pumping costs.

The Sites project has potential benefits for fish, but also the potential to worsen conditions for fish.

Potential to Worsen Conditions for Fish

Above all, there is too much unknown to evaluate how Sites would affect fish.

As is the case for most proposed water supply projects, the project description in the draft DEIR/DEIS for Sites describes several potential configurations of project infrastructure and a description of proposed constraints. The DEIR/DEIS does not evaluate different constraints, such as different bypass flow requirements past each point of diversion; the DEIR/DEIS only evaluates one value for each point. In spite of numerous requests that the DEIR/DEIS evaluate project diversions with more stringent Delta flow and water quality requirements than the existing inadequate ones, the DEIR/DEIS only evaluates project yield with existing Delta constraints.

The benefit side is even more vague and conceptual. The entire construct of hypothetical Sites benefits would in fact require a new type of proscriptive rules and enforcement mechanisms that would be unprecedented for California water projects. There is simply no clue in any of the Sites literature what those rules would be or even could be.

Then there is the question of whether there would be any offsets at all. There is no assurance that there will be any decreases at all in water use from Shasta or from other state and federal reservoirs. Water freed up by using Sites to meet Sacramento Valley water supply could simply allow Sac Valley water users to irrigate more land or sell more water for export at the Delta pumps. The DEIR/DEIS proposes no mechanism of enforcing offsets: who would regulate the project’s use of water, who would manage the interaction between Sites water and water from Shasta, Oroville, Folsom and perhaps Trinity reservoirs, and how and against whom any requirements would be enforced.

There are other problems. A shift to winter-spring diversions and use of canal systems would potentially change groundwater recharge and use patterns in the Sacramento Valley. The project would compete for water available to the proposed WaterFix Twin Tunnels project in the Delta. Sites and WaterFix have their “sights” on the heretofore untouched tributary inflows that are also protected by Delta export OMR limits so the flows reach the Bay. There will be a big fight over this uncontrolled water that now makes up a significant portion of the Bay’s freshwater input in drier years. Both projects have claimed future benefits of the same pot of water.

There are potential benefits from Sites project’s main features to Central Valley fishes, including salmon, steelhead, sturgeon, smelt, and striped bass. Most of the benefits would result from switching the diversion time period of the two existing upper river diversions and Shasta reservoir releases to these diversions. The added new diversion and increase in winter diversions will at important times reduce Sacramento River flow and Bay-Delta inflow and outflow, harming fish in certain but sometimes hard to quantify amounts.

Past water developments in the Central Valley have overwhelmingly made conditions for fish worse. The Sites project proponents claim that their project will be different. These proponents have not done themselves, the public, or public policy any favors by relying on generalities and politics as the centerpieces of their efforts to advance their project. At this time, there are too many unknowns to meaningfully evaluate the possibility that benefits might outweigh the harm and justify the costs. In the meantime, it is a reasonable working presumption that the Sites project will worsen conditions for fish as well. 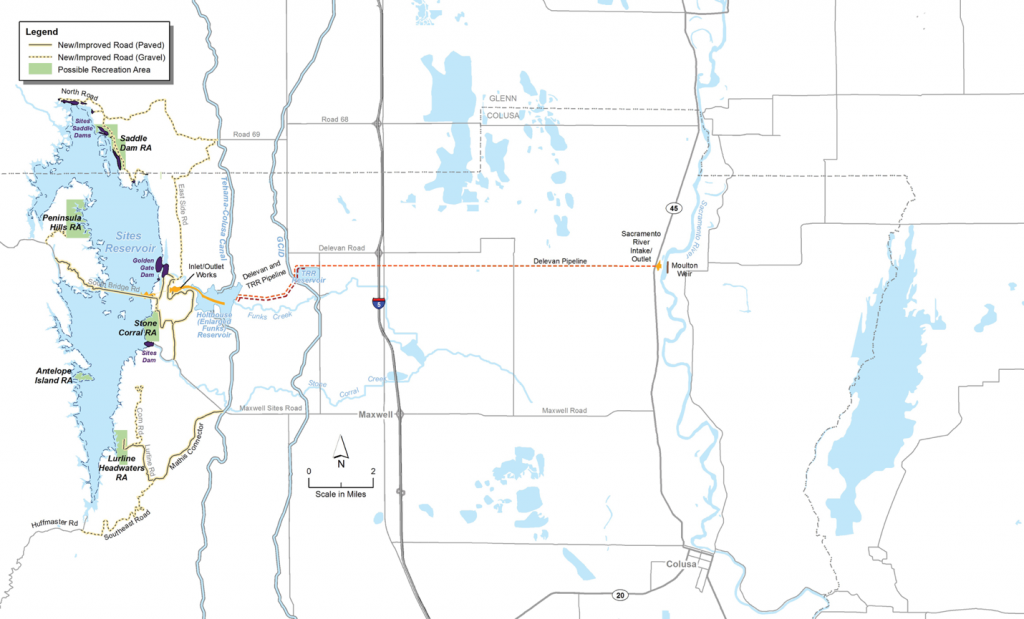 Figure 1. Proposed Sites Reservoir and associated infrastructure on west side of the Sacramento Valley. 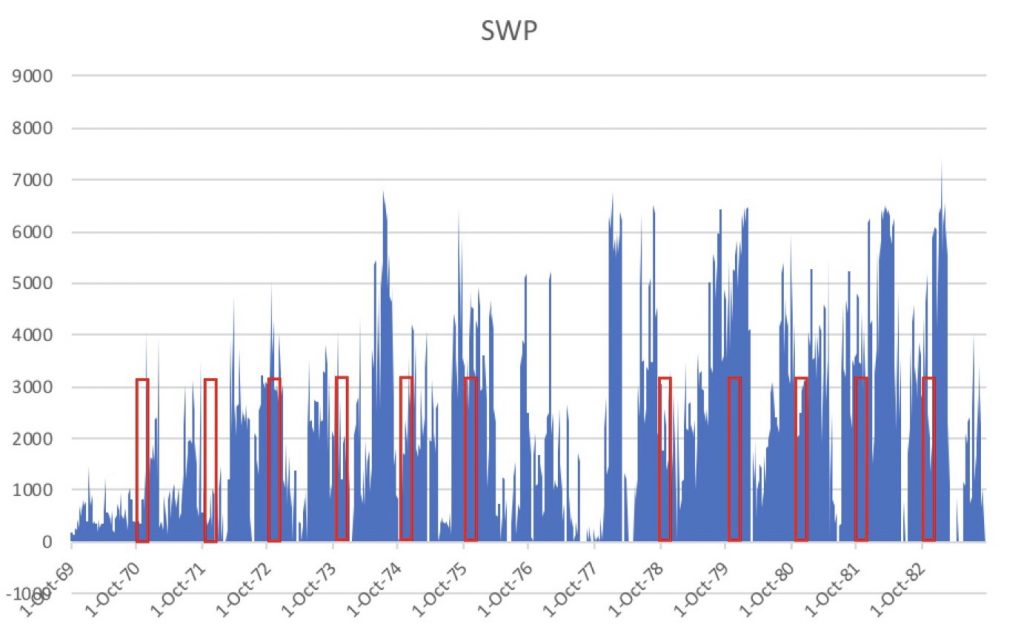