The Sacramento Bee ran an article on March 11, 2016 that reported how state and federal water managers have limited Delta exports to protect endangered salmon and smelt. The article also reported that Senator Feinstein had called for increased exports, and quoted a representative from Westlands Water District lamenting the loss of stormwater to the ocean.1

It was not so long ago that high late winter exports contributed to the decline of both species. In 2001, late winter exports of 8,000-11,000 cfs resulted in high salvage counts of salmon (Figure 1 – up to several hundred per day of Winter Run) in contrast to several hundred for the entire winter in 2016. Delta smelt salvage at South Delta Fish collection facilities reached several hundred per day in 2001 (Figure 2), in contrast to only a total of 12 in winter 2016. Winter 2001 Delta outflows were also high (Figure 3), but exports rules were not as strict.

Also noteworthy is the fact that the multi-agency Smelt Working Group has been recommending even lower exports this winter2 because of the record low numbers of smelt and the high risks to smelt from exports.

Restrictions on exports are reasonable and necessary to protect smelt and salmon. 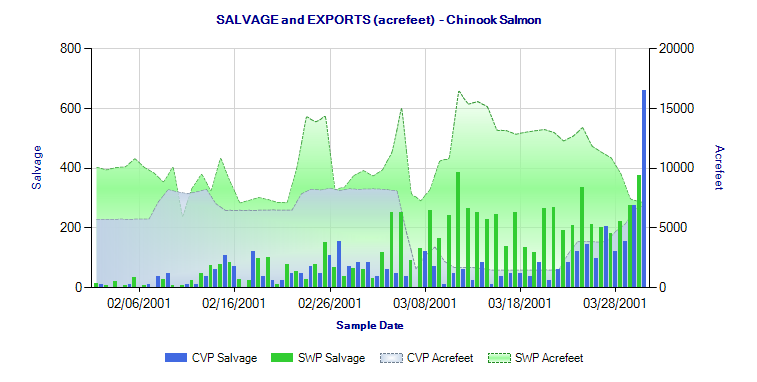