What Caused the Impending Extinction of Delta Smelt?

CSPA’s fisheries biologist Tom Cannon gave a presentation entitled “Contributing Cause of Smelt Decline: Water Exports” at a symposium on March 29, 2016 at UC Davis. The theme of the conference, sponsored by the Delta Stewardship Council, was: “Delta and Longfin Smelt: Is Extinction Inevitable?”

In his presentation, Tom put forth the hypothesis that the cause of the probable extinction of Delta smelt was the commencement of operation of the State Water Project’s Banks Pumping Plant in the mid-1970s. When Banks came on line, South Delta exports tripled, going from 2 million acre-feet to 6 million acre-feet per year. Tom’s hypothesis is that the mechanism of likely extinction was entrainment of Delta Smelt into the inflow to State and Federal South Delta pumping plants: exports.

The presentation’s first slide shows the familiar long-term Fall Midwater Trawl Index (Figure 1). Tom emphasized the sharp drop in the Index in 1981 (red circle in Figure 1), the first dry year of operations under the 1978 Delta Plan (water quality standards limiting operations of the Delta pumping plants). He noted that the decline likely started in the mid-1970s, but was most severe in 1981. There were recovery periods in the non-drought years of the 1990’s and 2010-2011. However, in 2001-2005, smelt and other Delta species crashed, a period now known as the “Pelagic Organism Decline,” or POD. Following a mild recovery in the wet year 2011, Delta smelt collapsed to record low indices in 2014 and 2015 (indices of 9 and 7, respectively, not shown in Figure 1).

An example of salvage during the 2001-2005 POD is winter-spring salvage in 2003 (Figure 4). Tom attributes the POD decline to the tens of thousands of Delta smelt lost to entrainment in winter and spring, including a likely large number of non-detected larvae under conditions of maximum exports.

According to Tom, export entrainment is the primary causal factor for the death spiral of Delta smelt, not low outflow. There were relatively high or improved smelt abundance indices in 1972, 1990, and 1991 (see Figure 1), which were all years with low outflows but also low exports. This is not to say, however, that low outflows are not also factors that contribute to high entrainment (Figures 2 and 3).

Tom concludes that Delta smelt are virtually extinct because their adult spawning numbers are insufficient to provide recovery even under 2016’s good (wet) conditions. Adult numbers are simply too low to produce sufficient offspring (Figure 5). The proof will come this spring, summer, and fall when indices of Delta smelt juveniles will likely remain critically low and not reach 2010 or 2011 levels, the last years when habitat conditions were favorable. 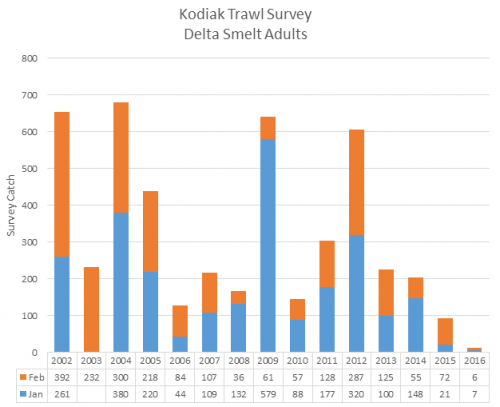 [1] Salvage collections are notoriously inefficient on small fish entrained into the pumping plants.  Predation loss before entering the salvage facilities has been estimated to be higher than 90%.

This entry was posted in Chris Shutes, Fisheries, Water Quality. Bookmark the permalink.