Calaveras River Plan Takes 14 Years to Keep All the Water

On November 14, 2019, CSPA filed comments critical of a new Habitat Conservation Plan for the Calaveras River and also filed comments critical of a supporting environmental review document.[1]   Stockton East Water District (Stockton East) and the National Marine Fisheries Service (NMFS) released the Plan and the supporting environmental review document on September 30, 2019.  The release of the Plan came just under 14 years after CSPA filed a public trust complaint with the State Water Board over harm to fisheries in the Calaveras River.  The 2019 Plan proposes to devote not a single drop of water to fish that water users on the Calaveras River can otherwise use for water supply.

CSPA’s 2005 complaint to the State Water Board over harm to Calaveras River fisheries alleged:

In 2006, the State Water Board put CSPA’s complaint in “abeyance” until Stockton East, the main operator of Calaveras River water, and NMFS could complete a “Habitat Conservation Plan” that would hopefully address conditions in the lower Calaveras River.  A Habitat Conservation Plan is a plan under the Endangered Species Act that allows “take” of protected species in exchange for specific commitments to undertake “conservation strategies” and “avoidance measures” that will protect those species.

Between 2005 and 2019, Stockton East made some temporary improvements.  Stockton East more consistently released a little more water from New Hogan Dam during the October-April non-irrigation season.  It made temporary improvements for fish passage at Bellota Weir, Stockton East’s big diversion at River Mile 24 that provides water to the city of Stockton.  Stockton East and others managed flood control releases to provide longer windows of opportunity for salmon and steelhead to move into and out of the river.  In addition, the California Department of Water Resources led teams that completed fish passage improvements at three major barriers downstream of Bellota Weir. 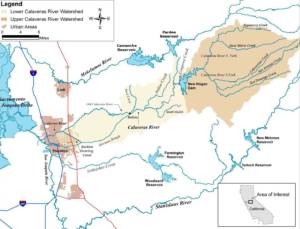 On September 30, 2019, Stockton East and NMFS released the long awaited Habitat Conservation Plan.  After 14 years that included no substantive consultation with CSPA, CSPA (and others) had 45 days to comment on the Plan itself and on the environmental review document that accompanied the Plan.

CSPA’s comments on the Plan criticize:

CSPA’s comments on the environmental review document for the Plan criticize:

CSPA asks Stockton East and NMFS to withdraw the existing environmental review document, to prepare and circulate an EIS/EIR for the Plan, and to revise the Plan based on the analysis in the EIS/EIR.

The Broader View: The Calaveras Habitat Conservation Plan Does Not Speak Well for Voluntary Agreements

Many people criticize CSPA for preferring regulatory or judicial strategies to collaborative stakeholder engagement on California’s water issues.  That characterization has some validity, but it is not always true.  CSPA engages in many stakeholder processes, but generally with these caveats:  1) CSPA is more likely to engage in a collaborative process if it is initiated by a forcing mechanism, like a judicial order or a pending regulatory action.  2) CSPA needs to be asked or allowed to participate.  3) The process must be an open public process; besides being an important principle, this allows straightforward pursuit of a regulatory or legal option if a process does not lead to agreement.  4) There has to be a reasonable opportunity to achieve CSPA’s goals within the process, at least in significant part.  5) There has to be a defined timeline; too many processes are just vehicles for delay.

CSPA’s position in relation to the Calaveras Habitat Conservation Plan provides good insight into the benefits and pitfalls of collaborative processes.  1) It was a regulatory action by CSPA that precipitated the development of the Habitat Conservation Plan for the Calaveras River in the first instance; chalk one up for regulatory process.  2) As far as anyone at CSPA can recall, CSPA was not invited to participate in developing the Plan.  3) When over the past two years CSPA asked NMFS staff about the progress of the Plan, NMFS staff was congenial and glad to discuss general process but declined to provide details of the Plan as it stood at the time.  In other words, the process to develop the Plan was less than public.  4) Judging from the description in the Plan, there was never any intent to use any water for fish that Stockton East could not otherwise capture or use for water supply.  So even had CSPA started in the process, it is likely CSPA would have withdrawn once the zero-new-water policy became evident.  5) It took almost 14 years to develop a Plan. While CSPA allowed other actors to work things out, regulatory process at the State Water Board stood still.

This is not a strong argument for what current terminology calls “voluntary agreements.”  The product of close to 14 years behind closed doors is not enough of an improvement to endorse the outcome.  The process was not quicker than regulatory and judicial review, and it is likely that those avenues will need to start again after over a decade of delay.

For good reason, CSPA stays with regulatory processes over decades.  CSPA has the institutional memory and the procedural history to outlast water agencies and utilities that through circumstance or intent run out the clock or leave issues buried and forgotten.  CSPA is also nimble enough to respond to short-term deadlines on issues whose dormancy has rivaled that of Rip Van Winkle.

What’s Next for the Calaveras River

CSPA hopes for a serious affirmative response by Stockton East and NMFS to CSPA’s comments on the Calaveras River Habitat Conservation Plan and its environmental review.

Barring that, CSPA is looking at dragging its 2005 complaint back before the State Water Board and asking for a hearing.  It may take a follow-up regulatory action to finish the job on the Calaveras River.

[1] The Habitat Conservation Plan and the environmental review documents for it are available at: https://www.fisheries.noaa.gov/action/calaveras-river-habitat-conservation-plan-and-environmental-assessment

This entry was posted in Chris Shutes, Water Rights. Bookmark the permalink.