On November 4, 2021, CSPA won settlement of a lawsuit it filed against AT&T’s PacBell subsidiary regarding eight miles of abandoned phone cable on the bottom of Lake Tahoe. As a result of the settlement, PacBell will remove the decaying cable. The cable contains 63 tons of lead. 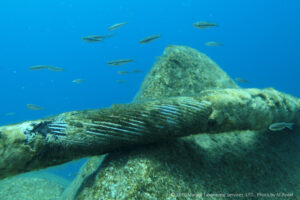 Local divers discovered the abandoned cables while removing other trash from the lake bottom. CSPA filed the lawsuit in January, 2021. CSPA provided the legal muscle and expertise to turn awareness of a serious problem into an action to fix it. CSPA’s lawsuit alleged violations of the federal Resource Conservation and Recovery Act of 1976 and California’s Safe Drinking Water & Toxic Enforcement Act of 1986 (Proposition 65).

PacBell switched to fiber optic phone cables over 30 years ago and abandoned the old cables that used a heavy lead sheath to shield copper transmission wires. The cables contain approximately 3 pounds of lead per foot. They extend for 8 miles along the western shore of Lake Tahoe from Baldwin Beach to Rubicon Bay, including across the mouth of Emerald Bay. While the amount of lead the cables have leached into Lake Tahoe is unknown, attorneys for CSPA found that three feet of cable left for one day in in a tub of Lake Tahoe water leached 4800 times the amount of lead allowed to enter a source of drinking water.

The settlement obtained by CSPA requires PacBell to get all the necessary permits for the cable removal. PacBell will then put the removal work out for bid. If permitting requirements push the removal cost above $1.5 million, the sides will need to come together to reassess.

In a press release, CSPA executive director Bill Jennings noted: “Lake Tahoe is one of California’s iconic waterways. We’re proud to help get this toxic garbage out of the Lake.”

This entry was posted in Water Quality. Bookmark the permalink.