My Take on The Benefit Bass Tournament Before blast off, I tied up to a dock because I didn’t want the wind to ping-pong me against the other participants drifting in the slough. John Sherman and partner, Ric Rudgers soon tied up to the same dock and almost wide-eyed, John said “what are we doing here?”

A couple of hours later, we headed south and down-wind through Franks, coincidentally during the peak of the crazy gusts. Sometimes I say to myself ‘F@2%in A, why me’ and this was one of those times. The ‘rollers’ and ‘swells’ in Franks had my prop cavitating and caused a significant loss of power in the shallow Tract. At a distance, I spotted a bass boat approaching the concrete break wall in front of Sugar Barge. The boat hit a wave and looked like it tipped 60 degrees, pointing up at the sky before it came crashing down. When Charlie and I approached the break wall, rollers were coming from every direction. It was pretty bad out there and it reminded me of being on Dave Sellers‘ boat on the wrong day in the Pacific Ocean.

I decided to return to the dock at about 2pm, ironically, right about when the wind started to cooperate. I scored a donut, but Charlie brought a fish to the boat; a tiny fish that flung out of the water on the hook set. He caught it like a short-stop pulling down a line drive. It was a tough day all around for the fly angler. 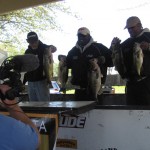 But as weigh-in progressed, the answer to Sherman’s question “What are we doing here?” started to take shape. I hung out with Barry Williams, Corey Cate, and Doug Lovell. Doug had reports of great topwater the day before. Multiple 30 lb-plus, huge sacks of fish tipped the scale, and double digit trophies had me smiling in awe. My ears perked up when Cooch, the MC, asked the winners how they caught their fish. My eye-brows raised up when Doug Lovell said he thinks most of the bigger females hadn’t joined the party yet.

And, despite being in a minority of 14 fly fisherman out of 100+ fisherman in the tournament, it was fine. I was people-watching an entirely unfamiliar segment of the fishing community, spear-headed by Bobby Barrack and Mike Frost who orchestrated the event on behalf of Restore the Delta and California Sportfishing Protection Alliance.

Big props to Bobby Barrack and Mike Frost and rest of the organizers and volunteers. These folks are fighting equally hard and for the same reason we do Striperfest and Bass ‘N Fly.

Outside of folks like John Sherman, Charlie Bisharat, Marcus Shroers and Ric Rudgers who are bridging the divide b/t the fly angling world and the gear anglers by participating and commiserating with the core of the black bass community, there were a few Fly Fishing Industry sponsors like Simms and Dan Blanton who contributed to the event’s raffle contest. 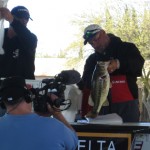 And big props to Bobby Barrack who, as I recall, contributed to Striperfest last year. It’ll be great to see more of this kind of cross-over b/c it represents continued unification of the angling community, which is sorely needed if we want to preserve the fishery and the natural resources of the Delta for the next generation of anglers. And, image how much louder CSPA and RTD could be, surrounded by a broader and more unified community of anglers.

The RTD/CSPA tournament organizers think the next tournament could attract close to 100 boats. Hopefully, they’re right, and hopefully we’ll see continued growing participation for all of these types of benefit events.