Not Just Another Bass Tournament, This One Had Three Divisions The tournament was held on Bethel Island on Sunday, October 17th,  for Restore The Delta and California Sportfishing Protection Alliance.

The rainy day was cool and windy but not terrible. Boats came in as scheduled in a no-wind situation. The rain held off a while too. The huge BBQ shelter at Russo’s was the right place to be for weigh-in at 3. About 80 people assembled there. Apparently the wind died off just for us. A hot dog snack was ready for returning fishers with plenty of sodas and chips.

Weigh-in was set up by DFG and typical (and excellent) tournament rules. Fishermen were shuttled with bags of live fish by Russo’s personnel in golf carts from the dock, up and over the hill to the transfer tanks and certified scales. We saw plenty of fish weighed. Would have been plenty more if stripers counted!

28 teams of two paid $150 to join the fun. One third was returned as payout for winners. Eleven teams were in the fly fishing division.

Bobby Barrack ran the show from the microphone expertly. He had a lot of good words to encourage fishermen’s support of RTD and CSPA. Mike Frost and Barbara Barrigan-Parrilla and I spent a little speech-time to pass along info,  thanks, and encouragement. The speeches were short and provided a good segue to the raffle.

Please excuse my incompleteness in this regarding results. I don’t have them all. I can tell you Dean and Travis Fonte won conventional division and Big Fish. Travis said he got the big fish on a Senko. Travis was his dad’s fishin’ partner this day.  I didn’t ask him how old he is, but I’m guessing he’s seven. 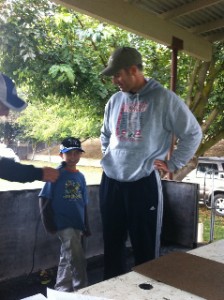 On the fly side, Bass N Fly Tournament’s Keith Kaneko and John Sherman were in the money.

Rod Buchanan and Mike Carlson from Tracy Fly Fishers were in the money for Rod’s big fish on a fly. Charlie Bisharat and Marcus Schroers, got second for fly division. Gregg Holland and Matt Greene bested everyone on the fly side with about six and half pounds.

Two teams donated their winnings back to the cause.  Personal thanks to Keith Kaneko and John Sherman, and Charlie Bisharat and Marcus Schroers!

The raffle was HUGE for the size of the gathering and the level of support is really appreciated. CSPA and Restore The Delta run on minimal money and do it with great effect.

Some of the donated raffle prizes I saw included Dan Blanton’s Rigged and Ready bags, a basket of wine with a dinner for six, fly rods and reels, conventional rods and reels, a ton of plugs and flies, fly lines, Buffs, Simms dry bags, and Vessel Assist memberships (and many others!).

Keith Kaneko and John Sherman donated their winnings to the cause

Horse-trading of gifts by fly guys to conventional folks got gear to those who could use it. A lot of tickets were sold and the support was The Best!

Between the tournament and the raffle, the outcome may have reached five thousand dollars raised.

My personal thanks to all who set the day up and poured their energies into a success for all.

This entry was posted in California Delta, Corey Cate. Bookmark the permalink.