The California Sportfishing Protection Alliance, California Water Impact Network, and AquAlliance filed comments to the State Water Resources Control Board (State Water Board) on July 16, 2021 in opposition to the proposed water transfer of up to 100,000 acre-feet of water from New Melones Reservoir. The transfer is requested by South San Joaquin Irrigation District and Oakdale Irrigation District (Districts). The proposed recipient is the San Luis and Delta-Mendota Water Authority (SLDMWA).

This proposed water transfer is reckless in the face of the ongoing severe drought, because it would greatly reduce water storage in New Melones Reservoir.  Water in New Melones is now being used to protect Delta fisheries, and New Melones storage is critical as a reserve in case 2022 is dry. 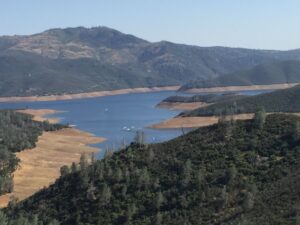 On July 12, the Districts filed amendments to their 2021 petition. The amended petition seeks to add San Luis Reservoir as an additional temporary point of diversion and rediversion, and to extend the time to deliver the water for use through February 2023. CSPA and allies filed supplemental comments to the State Water Board on July 19, continuing to oppose the proposed transfer.

But in a sudden turnaround, without public notice or explanation, Reclamation issued on August 5 a Draft Environmental Assessment (DEA) in support of the Districts’ proposed 2021 transfer of 100,000 acre-feet of water to SLDMWA.

Undaunted, CSPA and allies sent a comment letter to Reclamation on August 12 regarding the DEA. These new comments stated that the DEA is legally inadequate because it fails to analyze the contractual change in Reclamation’s implementation of the 1988 Agreement for the operation of New Melones Reservoir. This change will have long-term significant impacts on the environment. Reclamation needs to issue a draft environmental impact statement (EIS) that discloses such impacts and analyzes potential mitigations for such a major change. In addition, Reclamation needs to issue a separate draft EIS that discloses the significant impacts of the proposed transfer’s reduction of CVP storage both in 2021 and 2022.

Given the extreme drought and the critical need for carryover storage in New Melones, CSPA and allies strongly urge Reclamation not to allow the Districts to transfer water from the conservation account, either in this case or in the future. CSPA and allies also recommend that the Districts withdraw their proposed water transfer.

Editor’s note: on August 17, 2021, the State Water Board notified CSPA and other commenters on the proposed transfer that the Districts had withdrawn their transfer request.

This entry was posted in Cindy Charles, Water Rights. Bookmark the permalink.