The Smelt Working Group (SWG) was created as a requirement of biological opinions for the operation of the State Water Project and Central Valley Project under federal and state endangered species acts (ESA/CESA). The SWG is an eclectic mix of federal and state scientists and engineers whose mandate is to provide recommendations to managers on how operate the Delta to protect the ESA/CESA-listed Longfin and Delta smelt. The group holds weekly meetings. Often the meeting notes do not reflect real concerns of group members. One hopes that this is true in this case; the data and the conclusions don’t appear to line up.

At its April 20, 2015 meeting1, the SWG described the following baseline population conditions:

The SWG “agreed” on April 20 that there was no need to modify exports from their current 1500 cfs level or to modify Old and Middle River (OMR) reverse flows of -2000 cfs to protect Delta smelt. (They were probably thinking there were no smelt left to be concerned about – see Figure 1). In reality, the risk to the few remaining Delta Smelt from these flows moving towards the south Delta pumps is extremely high, even higher than that for Longfin Smelt.

The SWG also concluded there was no concern for Longfin Smelt (CESA listed only), despite multiple indicators to the contrary. In an April 13 post1 I discussed what happened in 2014 that led to the catastrophic loss of much of the Winter Run Chinook Salmon production in the Sacramento River when Shasta Reservoir’s cold-water pool was depleted by the end of August.  With a better temperature model, more knowledge of how to manage Shasta’s cold-water pool, and more volume in the cold-water pool this year, the agencies believe they can make it through the summer of 2015 while supplying the same amount of water to the Sacramento River Settlement Contractors (SRSC) with the same end of September storage as last year.

On April 20, 2015, the Bureau of Reclamation released a “Framework” for managing Shasta storage and the Sacramento River in 20152.  The problem with the Framework is that there are no details as to how the state goals of protecting Winter Run while delivering the same amount of water to SRSC in 2015 as last year will be accomplished.

“Agreement on Sacramento River and SRSC operations is the cornerstone to the overall operations of our water management system, and is a key piece needed before other decisions about volume and timing of transfers to junior water rights holders can be negotiated…. This type of creative, cooperative approach among project operators, regulators, and water users is fundamental to getting the most out of our limited water resources….  We must continue close coordination as we implement the plan, reacting to real-time conditions and balancing the inevitable tradeoffs.”  The problem with this statement is that it was also true for last year.  Despite these same efforts, over 95% of the endangered Winter Run salmon production below Shasta was lost last summer to failed efforts.

“Last year, endangered winter-run Chinook salmon redds in the upper Sacramento River were severely impacted by the lack of cool water,” said Maria Rea, Assistant Regional Administrator for NOAA Fisheries Central Valley Office. “This year we will continue to monitor the temperatures and operations of the Sacramento River throughout the summer.”  Part of the cause of widespread mortality of the 2014 Sacramento River cohort of Winter Run salmon was lack of cold water, but only part.  In addition, salmon redds were physically dewatered and eggs and fry were stranded.  This could occur again this summer.  When monitoring indicated there was a problem last summer, it was too late to take action.

“A major component of the overall framework is the temperature management plan for the Sacramento River. With the proposed temperature management plan and anticipated CVP operations assuming conservative inflow estimates, storage in Shasta Lake is projected to be approximately 1.1 million acre-feet at the end of September 2015. Water storage and releases from Shasta Lake will be managed carefully to assure the availability of water for multiple beneficial purposes during this fourth year of drought.”  This is the same end-of-summer storage level as last year.  Water storage, releases, and water temperatures were managed last summer.  What specifically will change to ensure that last year’s problem will not reoccur?  The Bureau’s website offers no clue.

“Reclamation will submit the temperature management plan to the State Water Resources Control Board next week as required by the recent Temporary Urgency Change Order.”  The plan will be based on this year’s conditions and a new temperature model.  What assurances do we have that this year’s plan and model will work better than last year’s? 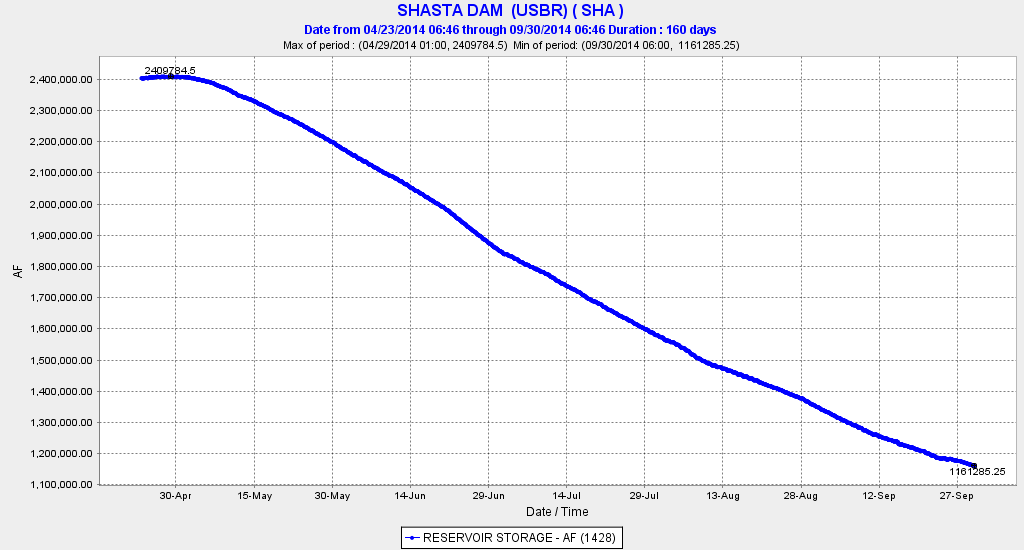 A San Joaquin River pulse flow and low Delta exports in April have led to a plankton bloom in the Central Delta. The pulse flow (Figure 1) and low exports (1500 cfs) were the result of two drought-related actions of the State Water Resources Control Board in its April 6, 2015 Temporary Urgency Change Order. The bloom is a consequence of low net transport flows in central Delta channels toward the south Delta export pumps and of the water habitat thus being allowed to “stew” with nutrients from the San Joaquin River. Chlorophyll levels rose with the onset of the pulse flow and recently have begun to decline with the end of the pulse flow (Figures 4-10). Chlorophyll levels were much lower in the west, north, east, and south parts of the Delta and in Suisun Bay, when compared to the central Delta. This process was described by Arthur and Ball (1977)1

“During spring through fall, export pumping from the southern Delta caused a net flow reversal in the lower San Joaquin River, drawing Sacramento River water across the central Delta to the export pumps. The relatively deep channels and short water residence time apparently resulted in the chlorophyll concentrations remaining low from the northern Delta and in the cross-Delta flow to the pumps.”

Such a spring bloom is important because it stimulates Delta productivity that is key to native Delta fish survival and production. Lack of Delta productivity over the past several decades (Figure 2) has been related to the Pelagic Organism Decline and near extinction of Delta Smelt (Jassby et al 2003)2. Low chlorophyll levels are also related to poor zooplankton growth rates (Figure 3). Figure 1. San Joaquin River inflows into the Delta at Vernalis during April 2015. 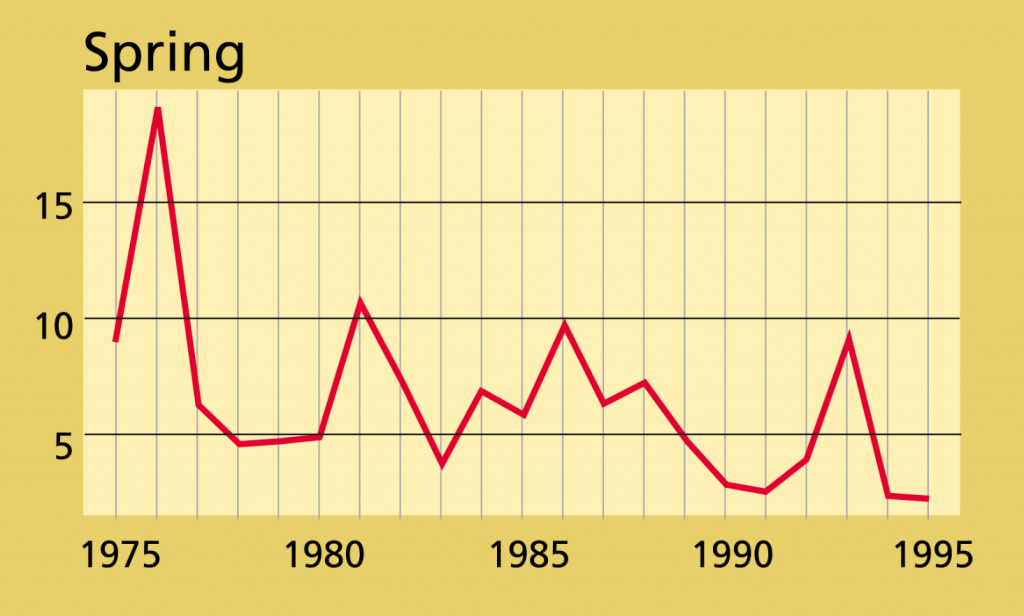 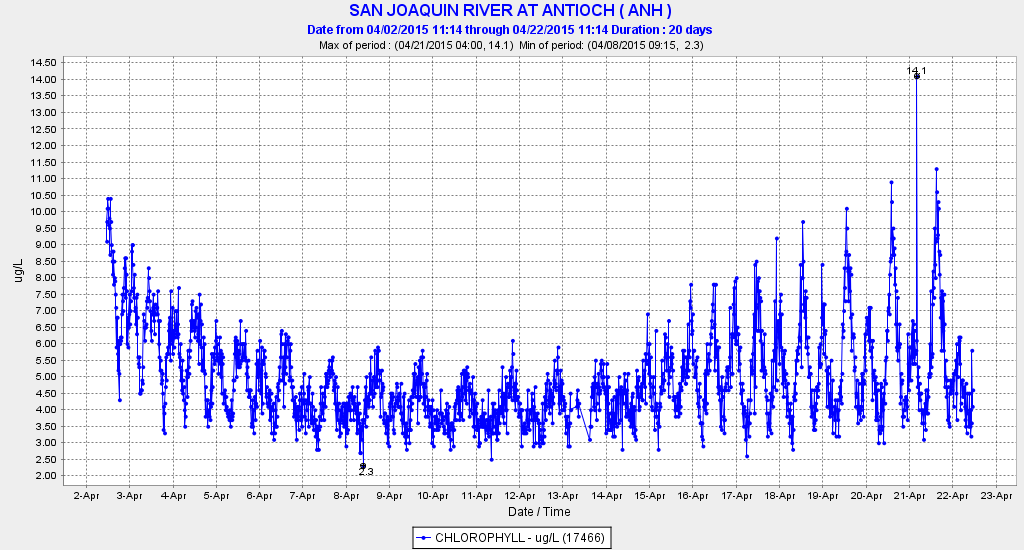 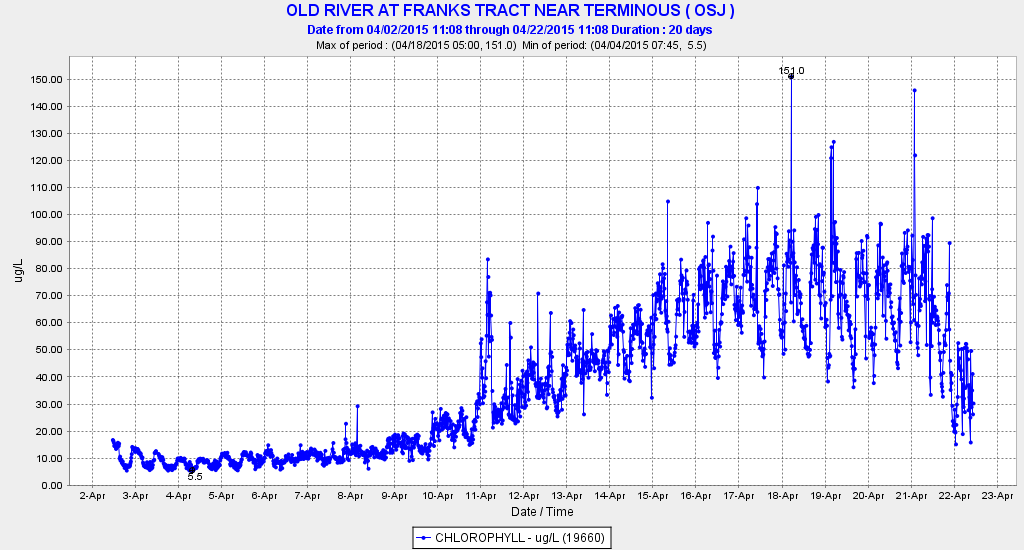 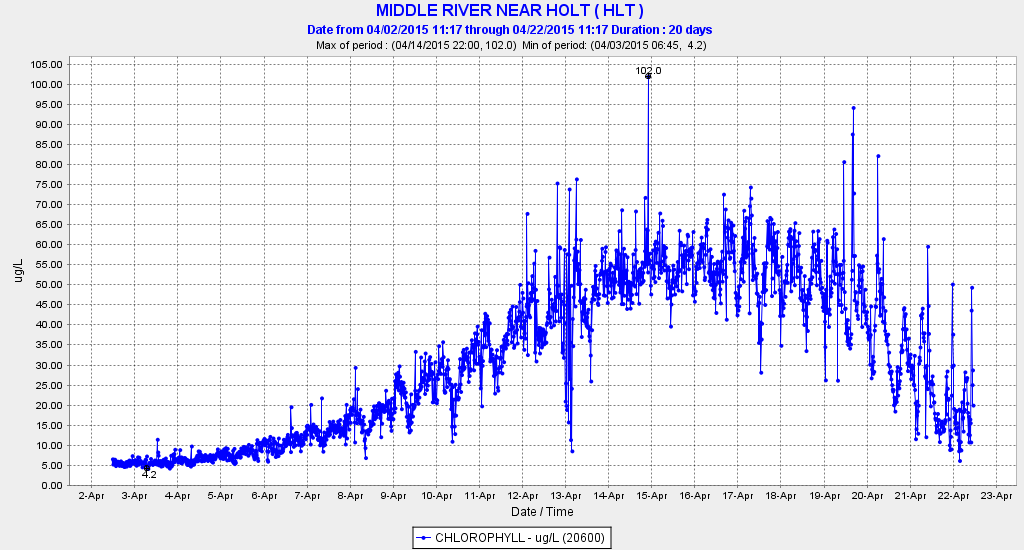 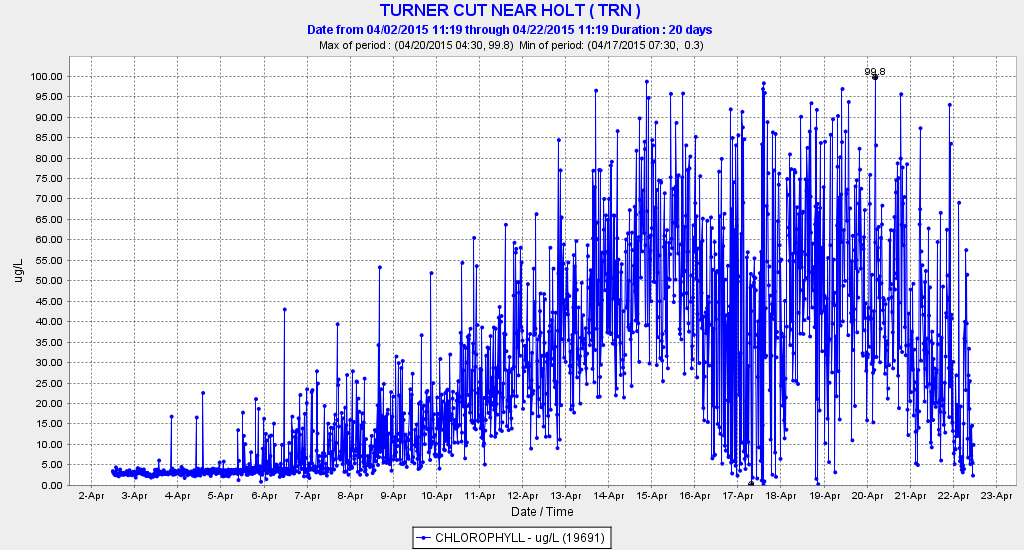 The chart below shows the recent record low catch of Delta smelt in the recent early April Kodiak Trawl by the California Department of Fish and Wildlife.  Trawls at 40 locations in the estuary collected a single Delta smelt, the fewest ever collected.  This result is consistent with other recent surveys, including the 2014 Fall Midwater Trawl (lowest in the historical record), the late April 2015 Smelt Larva Survey and early April 20 mm Survey.  Delta smelt, once the most numerous species in the estuary, is now hovering on the brink of extinction.  Longfin smelt are not far behind.  Yet the State Water Board continues to weaken already inadequate criteria established to protect these and other species. 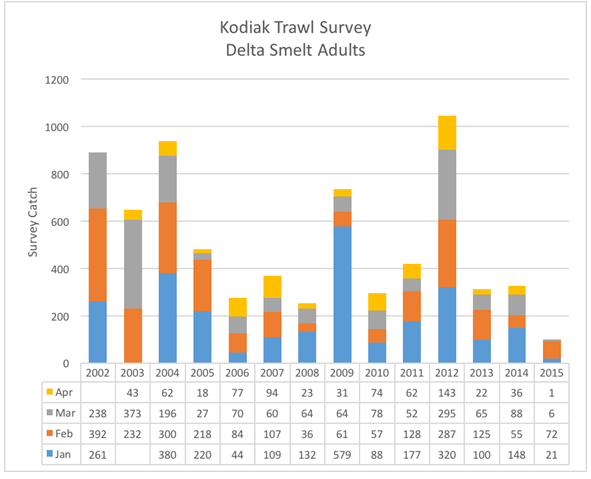 To save water, the State Water Board’s April 6 Drought Order reduced the Delta outflow standard to 4000 cfs Net Delta Outflow Index (NDOI) and allowed the Delta salinity standard compliance point to move upstream to near Rio Vista. Normally the NDOI would be 7100 cfs, and the salinity compliance would be further downstream toward Collinsville. South Delta exports are limited in the Order to 1500 cubic feet per second (cfs). 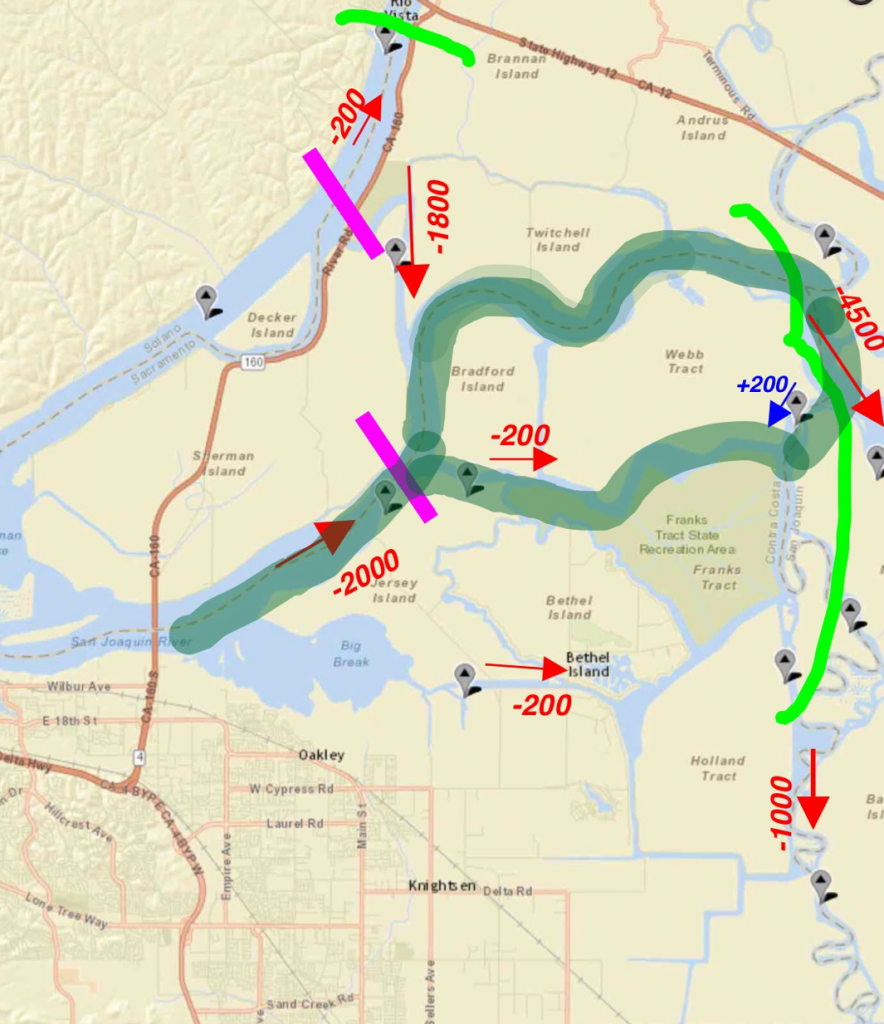 There are a number of important points about this picture and what it depicts:

In addition to restoring Delta flow and salinity requirements that were weakened by the State Board’s April 6, 2015 Order, what else should be done to reduce these negative effects on the LSZ and smelt during drought conditions?