In a Maven 1/17/19 post, US Fish and Wildlife Service hatchery managers discuss problems that have developed from trucking salmon smolts from the Coleman National Fish Hatchery (Coleman NFH) to San Francisco Bay. Chief among these problems is that juvenile fish trucked from Coleman NFH stray into other Central Valley rivers as spawning adults, rather than returning to Coleman NFH. This has become a general argument for releasing Coleman NFH smolts near Redding instead of trucking or barging them to the Bay.

During the 2013-2015 drought, many Coleman NFH smolts were trucked to the Bay for release to meet the hatchery’s goals:

The management goals for the hatchery are to provide about 1% of their production or about 120,000 fish from each brood year to the ocean fishery, the freshwater sport fishery, and returns to Battle Creek for brood stock, all while trying to reduce negative impacts on naturally spawning fish.

Trucking during the drought did meet the 1% production goal, but did not provide adequate hatchery returns for broodstock and did not achieve low straying rates.1 The USFWS has since chosen to ignore the production goal in order to achieve the other two goals. In dry years, the 12 million smolts now provide 10,000-20,000 adults (0.1-0.2%) to fisheries instead of 100,000-200,000 (1-2%). Instead of increasing hatchery production by barging smolts or improving post-release river conditions (higher flows), the fall-run salmon production program at Coleman NFH, designed explicitly as mitigation for loss of salmon from the federal Central Valley Project, is not meeting its primary mitigation goal.

In the response to Maven’s questions on USFWS presentation at the Bay-Delta Science Conference, the USFWS managers offered the following responses:

Hatchery program managers should not give up on trucking and on reducing high stray rates. They should consider barging juvenile salmon to better imprint smolts and improve smolt survival. Federal water managers also need to improve lower Sacramento River conditions for returning adults, in order to reduce straying. Water contractors and state/federal purveyors must also collectively limit their water diversions to meet water right permit conditions and water quality standards that are designed to protect fish. Egg taking should be increased if hatchery releases are to continue, in order to meet mitigation goals. These measures will all help hatchery managers meet their adult production goals and mitigation commitments. Trucking, a standard practice at state hatcheries in all year types, may be necessary, especially in periods of drought, to meet mitigation goals.

Washington State is increasing salmon production to help in recovery of near extinct salmon populations and orca (killer whales). A Washington state Department of Fish and Wildlife webpage describes the role of hatcheries in restoring wild salmon stocks:

In recent years, state hatcheries also have taken on an equally important role in helping to recover and conserve the state’s naturally-spawning salmon populations. Nearly all the hatcheries in the Columbia River and a number of hatcheries in Puget Sound play a role in wild fish rebuilding programs, whether by rearing juveniles prior to release or holding fish through their lifespan to ensure the survival of depressed stocks. This renewed focus on wild stock recovery represents a major realignment in hatchery operations, as WDFW, the tribes, federal government and independent scientists worked to develop a comprehensive operations strategy for hatcheries in Washington. 1

The main reform actions being taken in Washington’s program are:

While California is slowly moving toward some of these reforms, there is resistance to others. For more information and links on California hatchery programs see http://calsport.org/fisheriesblog/?cat=5 , https://www.wildlife.ca.gov/fishing/hatcheries , http://cahatcheryreview.com , https://www.fws.gov/sfbaydelta/Fisheries/hatcheries/NoCAHatcheriesUSFWS.htm . 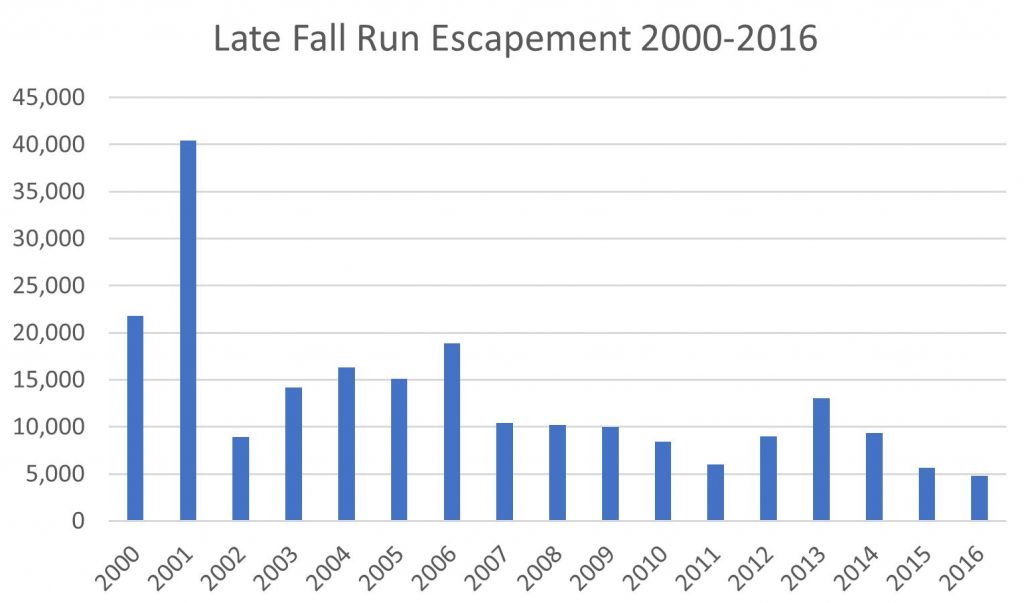 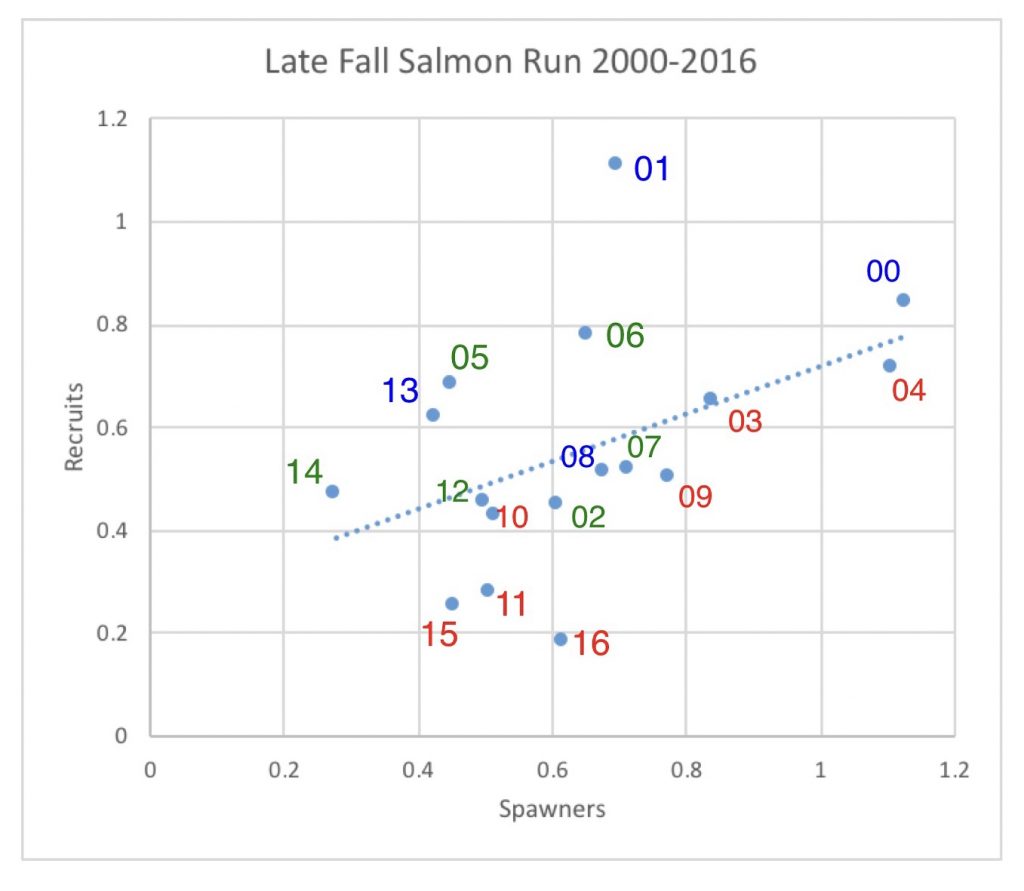 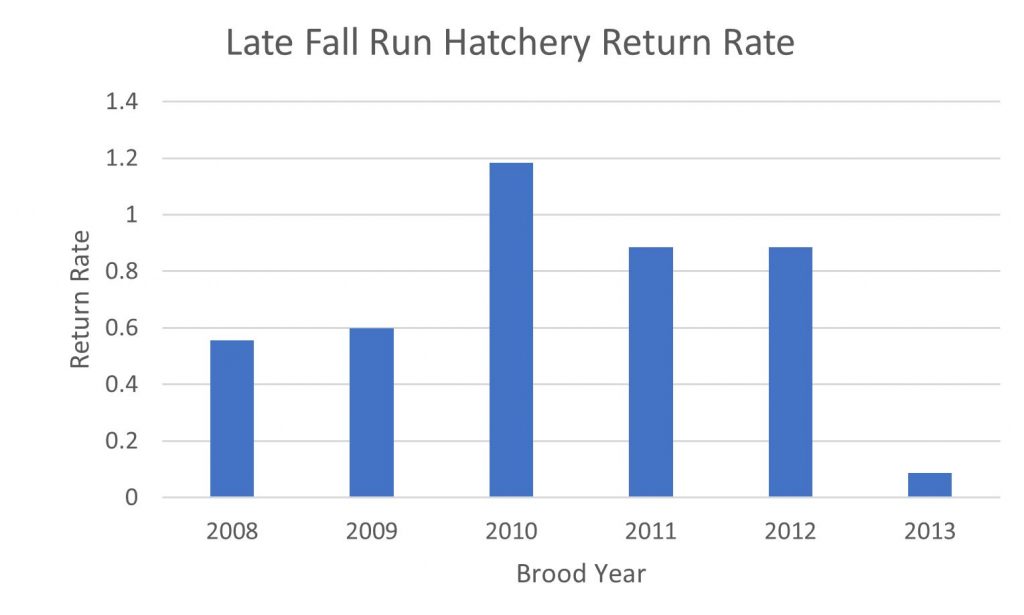 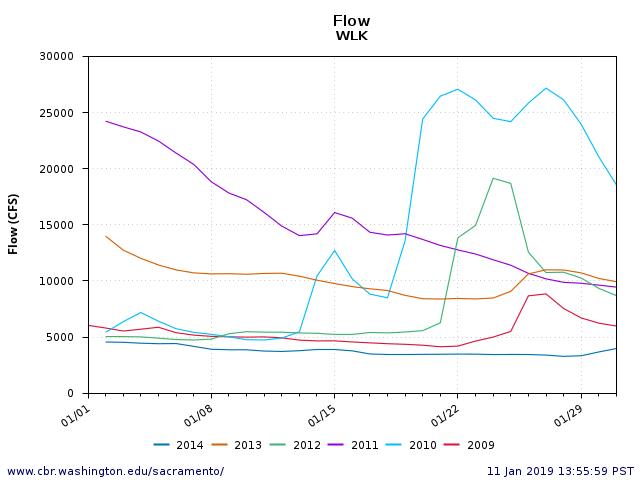 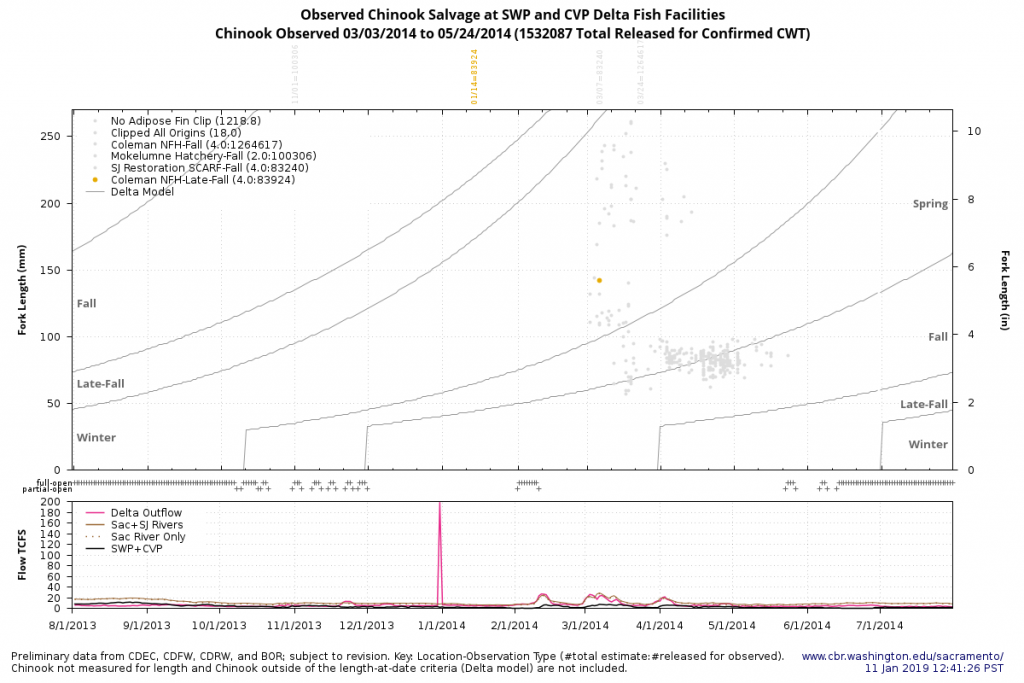 In a February 2018 post I last updated the status of longfin smelt in the Bay-Delta. I showed that longfin smelt have a strong spawner-recruit or stock-recruitment relationship wherein new recruits into the population depend on the abundance of spawning parents (Figure 1). The relationship also indicated a strong influence of water–year type.

What is it in wetter years that improves survival? What is it about wet years that is important to longfin survival? My analysis is it is the spring Delta outflow, with June likely being important. The fall longfin index is significantly correlated with June outflow (Figure 2). It requires Delta outflows in the 8000-10,000 cfs range to keep the low salinity zone and young longfin in the Bay, west of the Delta and away from the south Delta export pumps and warm low-productivity pelagic habitats.

Present standards (see link, pdf pages 26-27) for June require outflow of 7100 cfs on a 30-day running average. This contrasts sharply with previous June standards under Water Rights Decision 1485 (see link, pdf page 43) which required an average monthly flow of 9500 cfs in some below normal years, 10,700 cfs in Above Normal years, and 14,000 cfs in Wet years. In its ongoing update of the Bay-Delta Plan, the State Water Resources Control Board must account for the importance of the outflow standard for June in protecting Bay-Delta ecological resources. 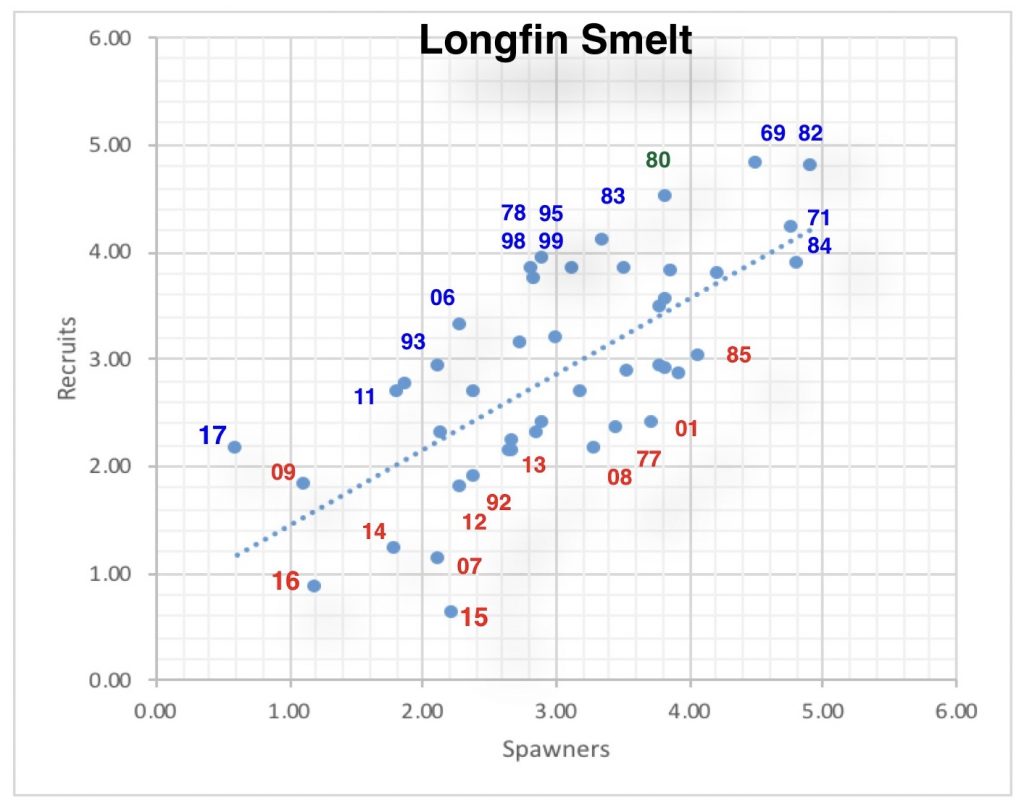 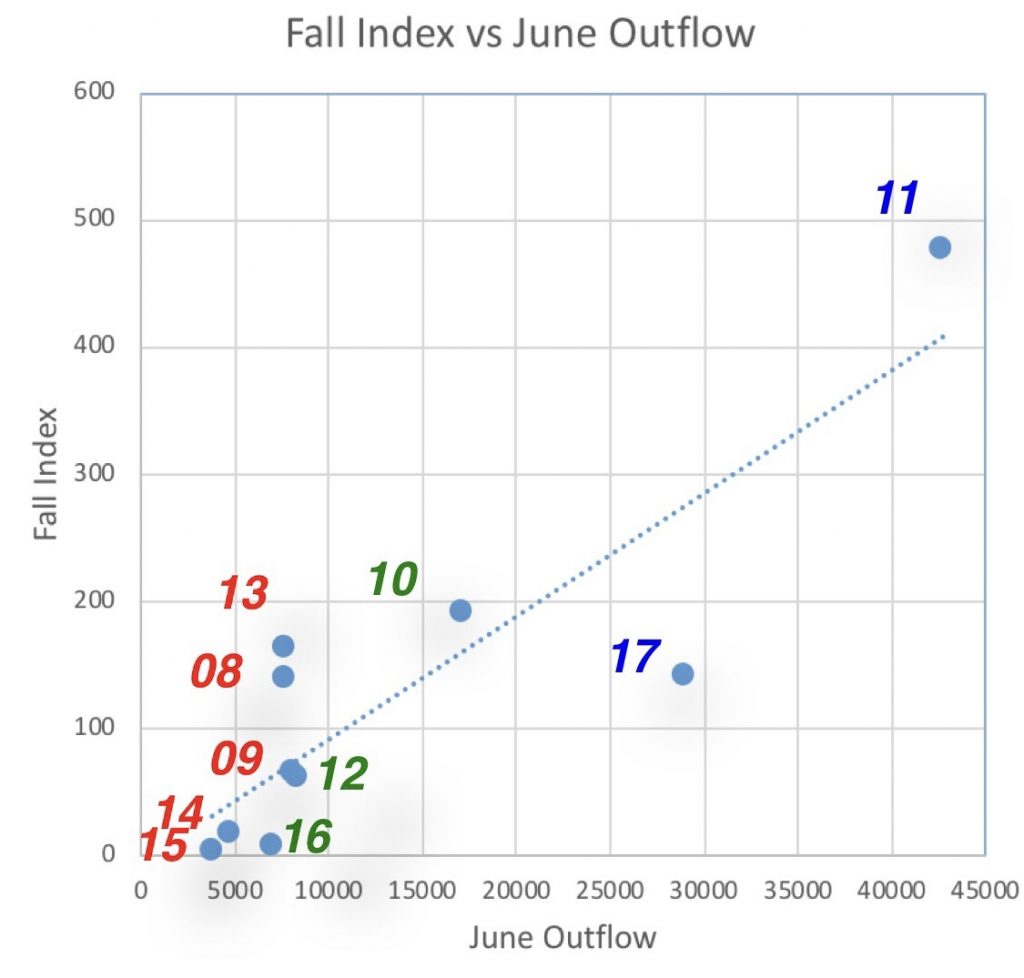