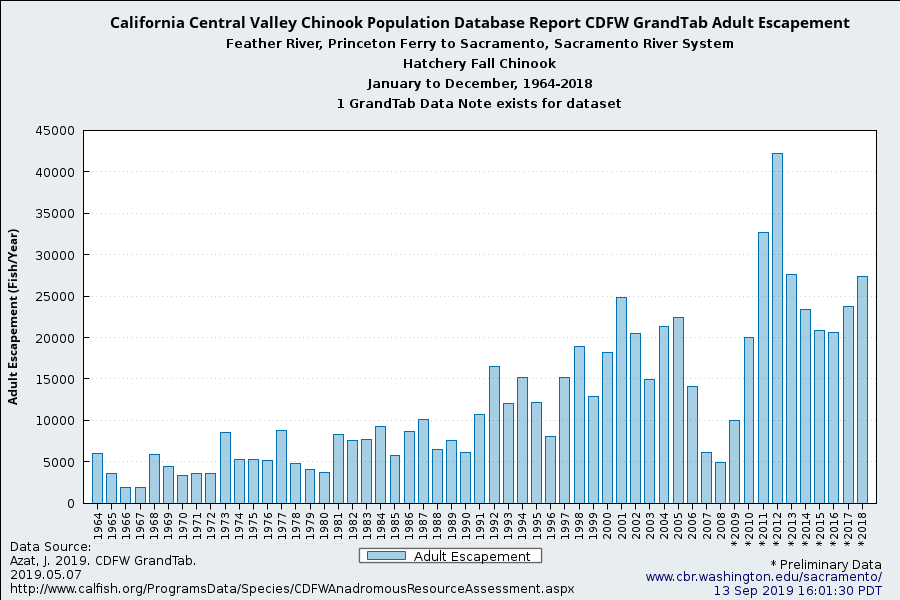 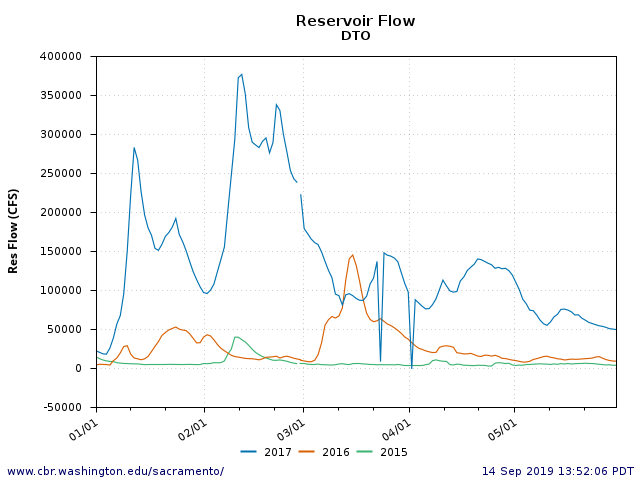 The US Bureau of Reclamation (Reclamation) is proposing a “Delta Smelt Fall Habitat Action” that would eliminate the requirement to increase outflow from the Delta in the late summer of this wet water year.1 The “Fall X2” flow increase that Reclamation has placed on the chopping block is a major provision in the 2008 Delta smelt biological opinion (BiOp). Reclamation describes the substitute proposed Action in a summary its webpage:

The Proposed Fall Habitat Action (Proposed Action) for Delta Smelt habitat in Water Year (WY) 2019 will achieve the Action 4 objective. Action 4 of the 2008 BO requires adaptive management to ensure that the implementation addresses the uncertainties about the efficiency of the action. Action 4 also states that as new information is developed and as circumstances warrant, changes by the Service to the Fall X2 action itself may be necessary. The Proposed Action is a plan to adaptively manage and modify its operation of the CVP/SWP under RPA Action 4.2

In brief, the “circumstances” that “warrant” this “adaptive management” are that getting rid of Fall X2 will allow Reclamation to export more water from the Delta this fall.

In August 2019, Reclamation issued an Environmental Assessment (EA) of the Proposed Fall Habitat Action. Though the Action will unravel a major component of the 2008 Biological Opinion for smelt, the comment period was 15 days. CSPA submitted comments; some of them are restated below, in response to citations from the “Effects Analysis,”3 an appendix to the Environmental Assessment.

The Effects Analysis quotes the BiOp to portray the Proposed Action as a scientific investigation, stating:

“[T]here is a high degree of uncertainty about the quantitative relationship between the size of the Action described above and the expected increment in Delta Smelt recruitment or production.” (p. 1).

Comment: After 2011, it has been nearly impossible to measure population response to changes in management because the smelt population has become so low. Likewise, a negative response cannot be detected at the present population level. The only certainty to be gained from harming a nearly extinct population even more is that Reclamation will increase exports from the south Delta.

The Effects Analysis selectively calls out results of the first implementation of the Fall X2 requirement in 2011:

“Abiotic habitat did increase in 2011 as predicted from the AMP, but other variables such as zooplankton abundance were too variable to draw a conclusion, and Delta Smelt growth rate comparisons remain incomplete as of 2019.”  (p.2)

The Effects Analysis tries to explain the lack of response of Delta smelt to the 2017 Fall X2 action as a function of water temperature, concluding that the action was just futile:

In 2017, a Fall X2 adaptive management action was implemented. The results of the 2017 monitoring program were evaluated in the IEP’s 2019 draft FLOAT-MAST, which concluded that summer water temperatures were a major factor in the condition of Delta Smelt in 2017, stating at p.102: Given the long periods in July and August >22C we are confident that water temperature had a major negative effect on Delta Smelt in 2017 and is likely a primary factor in the lack of response of the Delta Smelt population to the high flows.  And at p. 104: Dynamic biotic components were somewhat better in 2017; however, the lack of response of the Delta Smelt population suggests that any benefits of changes in the habitat were minimal. (p. 3)

Comment:  It is true that recruitment of Delta smelt in 2017 was exceptionally low, despite the Fall X2 action.  This is because the number of adult spawners in 2017 was at a record low (Figure 2).

In general, spring habitat conditions were poorer in 2017 than in 2011:  2017 had lower spring Delta outflows (Figure 6) and much higher south Delta exports (Figure 7).

These data undermine Reclamation’s conclusion that the 2017 Fall X2 action had no benefit. 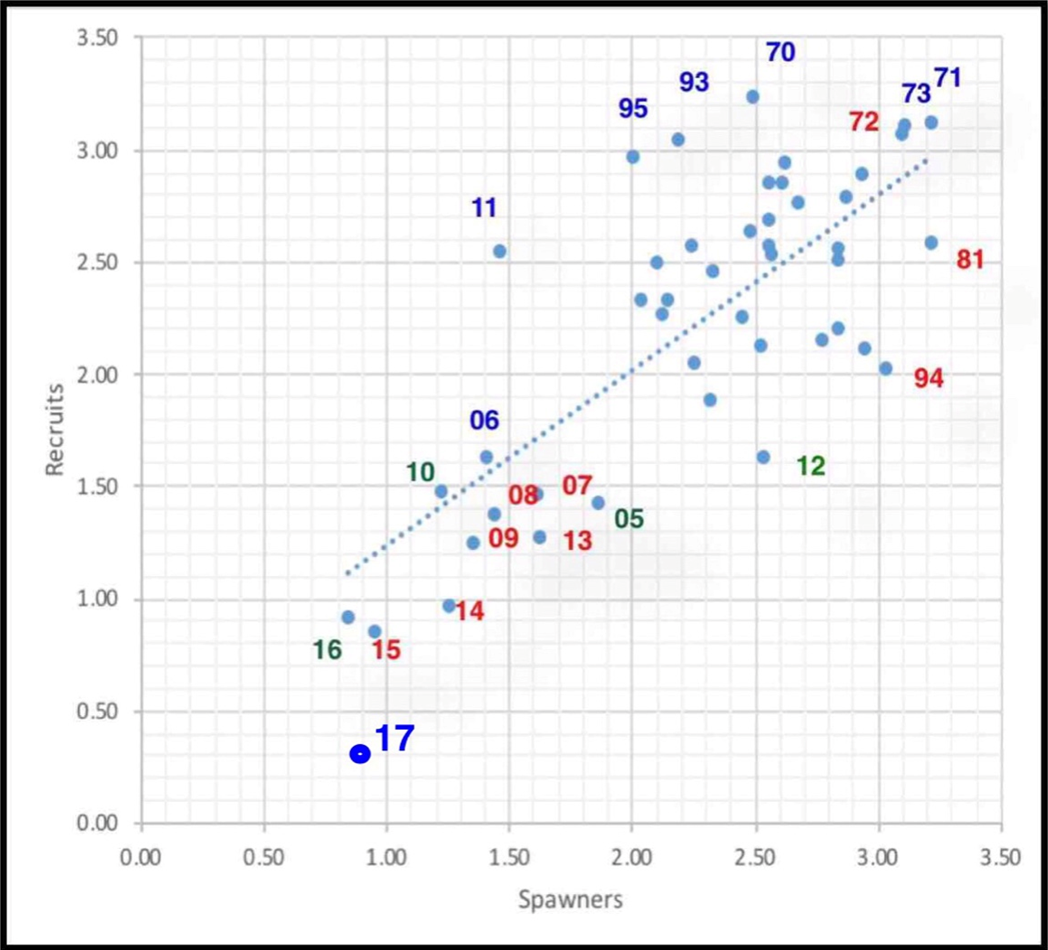 Figure 3. Comparison of Jersey Pt habitat conditions in 2017 versus 2011. Tidally filtered flow data were not available for 2011. 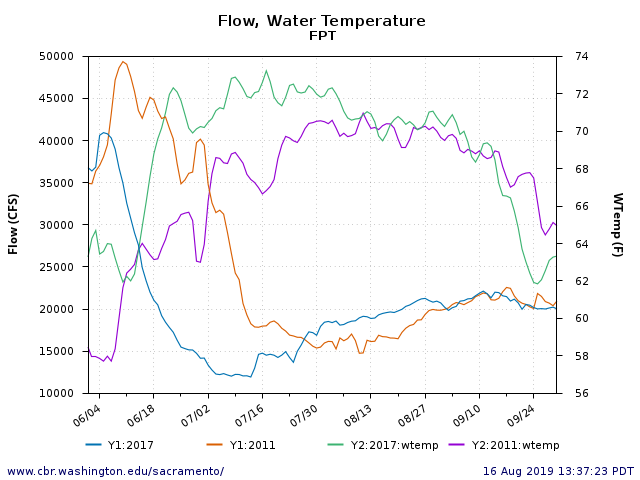 “Forecast of salinity conditions in the Delta indicate that operating to an X2 of 80 km along with SMSCG operations in September and October would result in suitable salinity conditions (< 11,000 uS/cm) in the western Delta including Suisun Marsh, Grizzly Bay, and Honker Bay during these two months.”  (p. 17)

“However, as explained above, this estimate of abiotic habitat index does not account for the habitat created in Suisun Marsh through the operation of the SMSGC, which would increase the index.” (p. 31)

Comment:  moving outflow through SMSGC reduces habitat in eastern Suisun Bay, and subsequently traps any Delta smelt in Suisun Marsh once the gates are again closed.

Conclusion:  Stock-recruitment models show a strong positive population response for Delta smelt in 2011 (see Figure 2) and longfin smelt in 2017 (see Figure 8).  The strong population responses in 2011 and 2017 offer a strong case for implementing the Fall X2 action in 2019.  Reclamation’s only justification for eliminating the Fall X2 action in 2019 is to increase water available for export.  Biology has nothing to do with it.

Delta outflow has been estimated by state and federal agencies for over 50 years.  The Department of Water Resource’s Delta Total Outflow is a daily-average algorithm calculated in cubic feet per second (cfs) for Station DTO, a hypothetical location near Chipps Island in Suisun Bay.  The federal Bureau of Reclamation’s Delta Outflow estimate is calculated similarly and presented as a daily average flow in cubic feet per second on Reclamation’s website.

Now a third estimate of Delta Outflow is available from the federal US Geological Survey on one of its websites (https://waterdata.usgs.gov/nwis/inventory?agency_code=USGS&site_no=380245121532301).  This site has daily average estimates for a “gage” near Chipps Island since summer of 2016.  The estimate is from tidally filtered flow/stage data.

A comparison of the DWR and USGS estimates is shown below in Figures 1 and 2.  The two estimates are very similar.  A closer comparison during the low-flow summer periods of 2018 (Figure 3) and 2019 (Figure 4) indicates significant differences, or at a minimum a modicum of uncertainty in one or both of the estimates.  The average flow in the DWR data for 2018 data is about 10% higher over the period than the USGS data.  The role of tides or tidal filtering in the USGS estimate is a likely factor in the difference.  Under high seasonal tide periods (termed spring tides), outflows can fall to near zero, with major ramifications to salinity and water over the entire Bay-Delta, especially in the high export summer season.

The state’s current water quality control plan for the Delta includes objectives for Delta outflow (Figure 5).  The objectives are stated as a monthly average.  The low level of the objectives 3000-8000 cfs should give one pause as to the level of protection that these objectives provide to public trust resources like fish.  The Water Resources Control Board is in the process of updating its plan and water quality objectives.

In past posts, I have advocated for daily salinity standards for the Delta rather than bi-weekly or monthly objectives for outflow, flow, export, and salinity.  Such daily standards could be readily planned for, managed, monitored, and assessed for effectiveness. 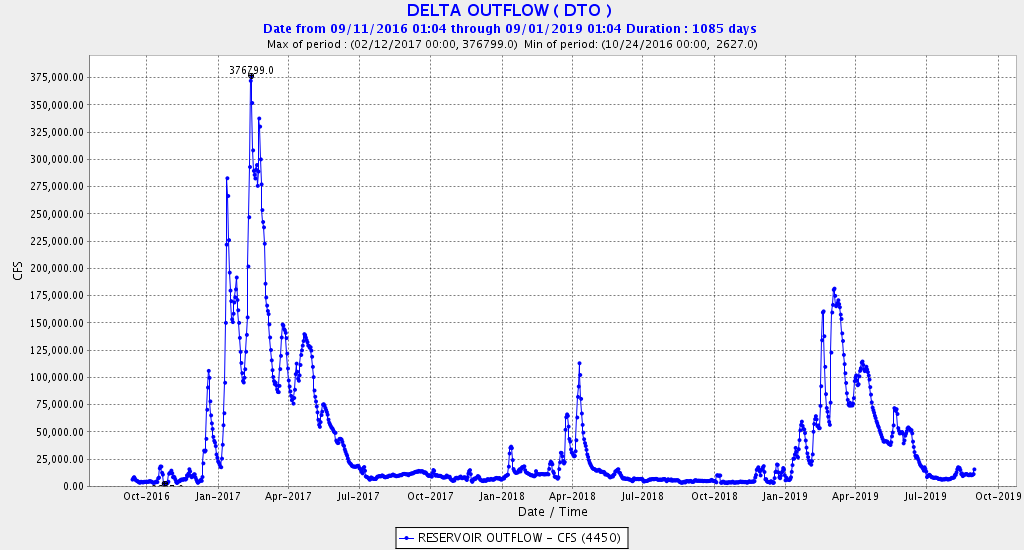 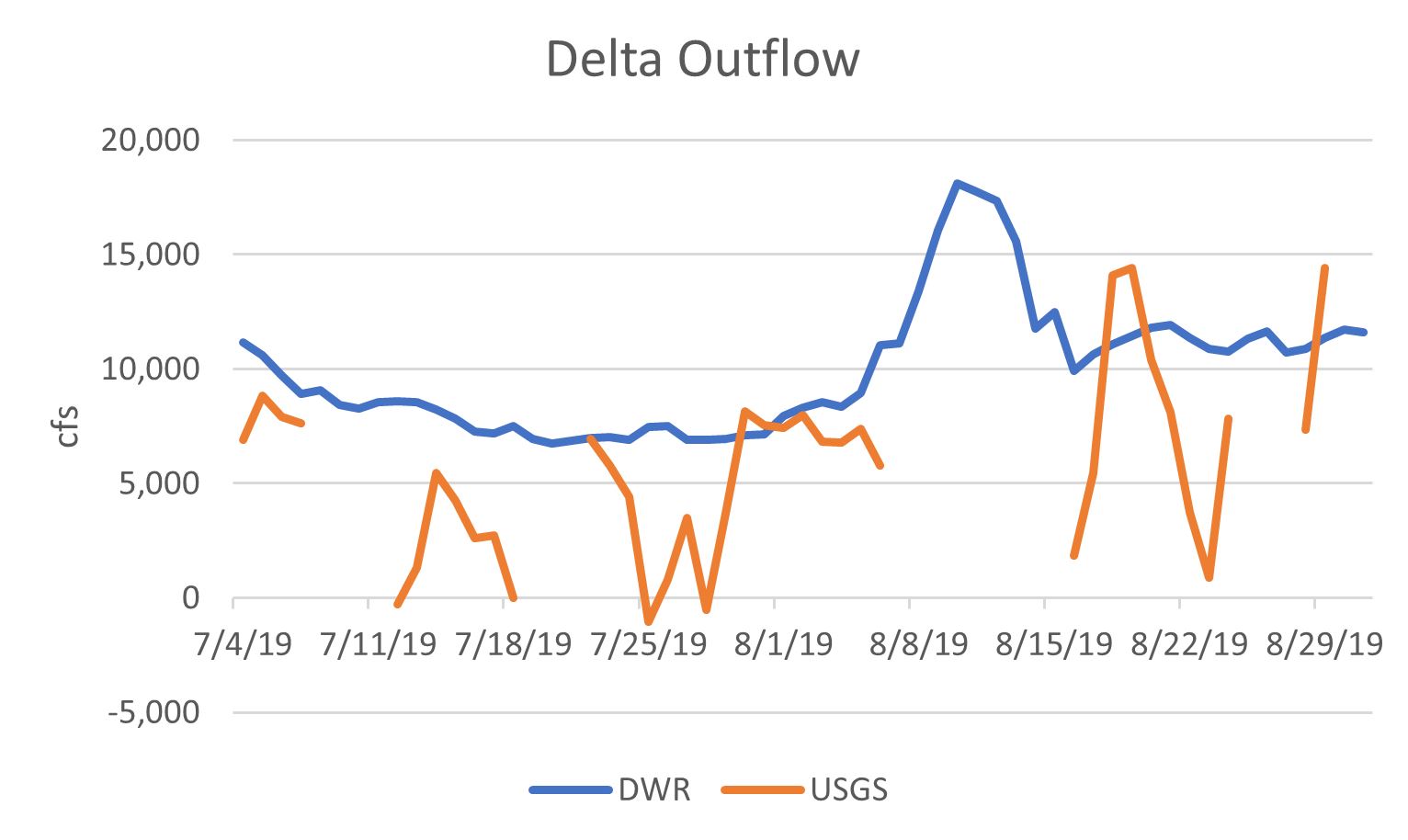 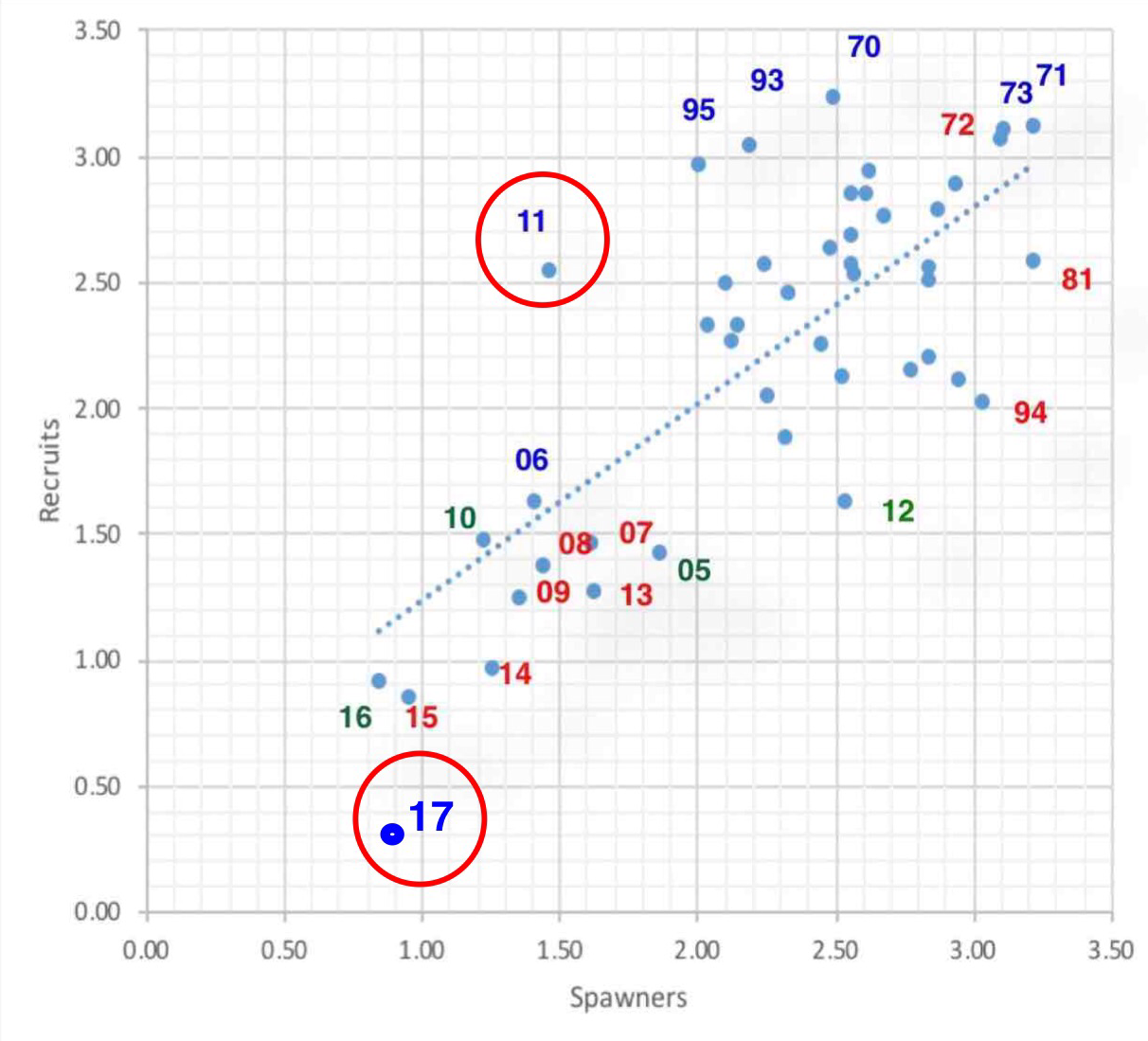 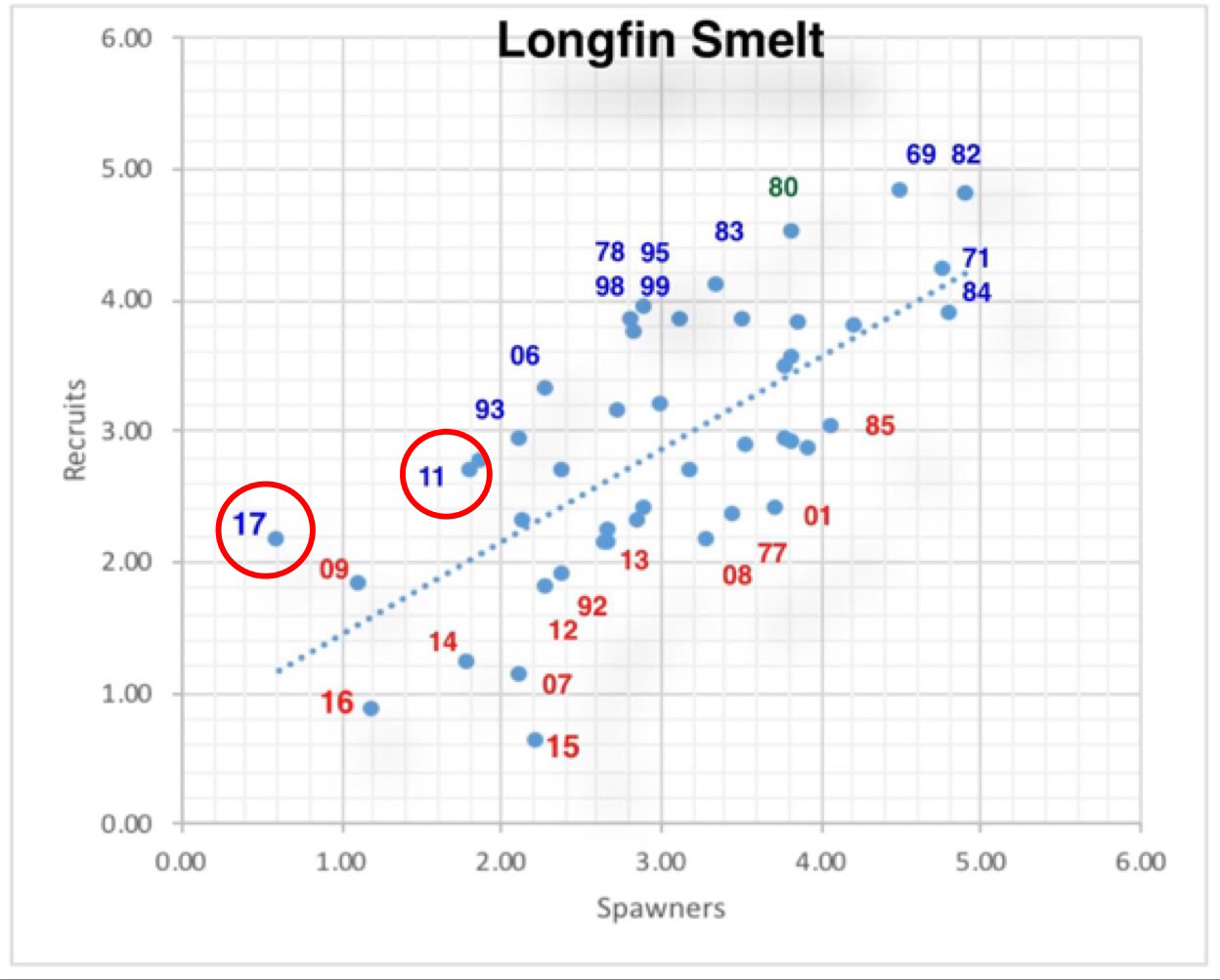 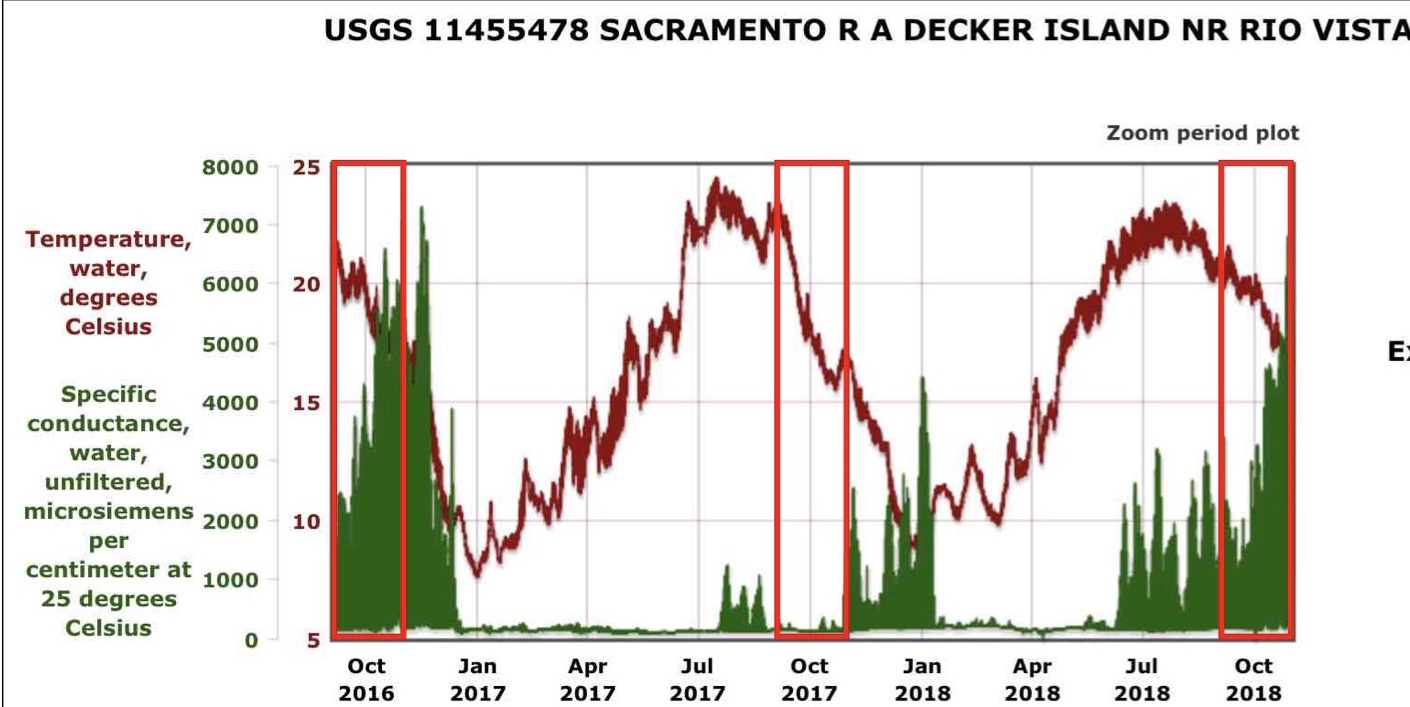