In a December 2020 post, I described the status of the fall-run salmon population in the Yuba River.  Hatchery salmon predominate, while natural production is minimal.  The population remains in a very poor state – at about 10% of recent historical levels during and subsequent to multiyear droughts such as 2007-2009 and 2013-2015 (Figure 1).

In a January 11, 2022 post, the South Yuba River Citizens League (SYRCL) promotes cleaning the two fish ladders at Daguerre Dam half way up the river to the impassable Englebright Dam, in order to provide better passage for spawning salmon to prime spawning habitat.  Without effective ladders, salmon are delayed or even forced to spawn downstream of Daguerre Dam in marginal habitat.  The ladders must be maintained per the federal NMFS biological opinion and take permit to operate Daguerre Dam as a water diversion dam for the Yuba County Water Agency (YCWA).

It is instructive to compare flows in 2020 (Figure 2) to flows in 2021 (Figure 3), particularly at the Marysville gage, where water has passed downstream of all the local agricultural diversions at Daguerre Dam.

From May through mid-August of 2020, flows at Marysville averaged about 1000 cfs (Figure 2).  The vast majority of this water was released through YCWA’s New Colgate Powerhouse upstream of Englebright Dam.  In the fiscal year from July 1, 2020 to June 30, 2021, YCWA had revenues from power sales of over $80 million. 1 Water released during the summer creates more power revenue than flows released in spring.

Better management for fish would release more of the water in the spring, providing more areas in the lower Yuba River for juvenile salmon and steelhead to grow and higher flows to move them downstream when they are ready to leave the system.  SYRCL, CSPA, and other conservation organizations, as well as staff from fisheries agencies, have recommended such a change in release pattern during the ongoing relicensing of YCWA’s hydropower project.

Some of this water released in the summer of 2020 was also sold out of the watershed, generally to entities south of the Delta.  In the fiscal year ending June 30, 2021, YCWA also made $12 million on water sales.2 The large flow increase at the end of August 2020 – likely a water sale – had no benefit for fish.  Its biggest effect on fish was that It drew down storage in New Bullards Bar Reservoir, which created a cascading effect in the very dry year 2021, when flows for all purposes were limited by lack of stored water.

In a very dry year like 2021 that follows a dry year like 2020, river flows in spring and summer (Figure 3) become a major limiting factor.  First, there are no late-winter, early-spring flow pulses to attract adult spring-run salmon.  At a flow of 400 cfs at the bottom end of the lower Yuba River, there is insufficient flow to help adult spring-run salmon move upstream through many shallow riffles and through the Daguerre ladders.  Very low late-summer and fall low flows likewise hinder fall-run salmon.  Second, flows in late winter and early spring are too low to efficiently carry juvenile salmon downstream while avoiding the many predators on their way to the Bay and ocean.  Downstream of Daguerre Dam, over-summering juvenile salmon and steelhead must contend with low flows and associated stressful water temperatures.  Additionally, spawning at 400 cfs flow leads to redd scour if fall rainstorms occur: a late-October storm in 2021 brought Yuba flows up to 15,000 cfs and raised water levels nearly 10 feet (Figure 4).

Feeding and cover habitat in the lower Yuba River are virtually nonexistent.  Predatory fish abound below Daguerre Dam.  Floodplain off-channel habitat and woody debris are severely lacking, especially during when winter-spring river flows are relatively low.  Many fall-run salmon spawn in poor spawning habitat below Daguerre.  To its credit, YCWA has contributed on a voluntary basis to several habitat improvement projects in the lower Yuba River, including the ongoing restoration at Hallwood.  However, it has vigorously resisted the establishment of regulatory requirements for additional projects.

Keeping the ladders clean is already a mandate.

Flow regimes and habitat improvements are necessary to save Yuba salmon, in addition to ladder repairs and cleaning at Daguerre Dam.  The Yuba River Accord, which has defined lower Yuba River flows since 2008, leaves too much flow in the summer by shorting flows that salmon and steelhead need in the spring.  The channel of the lower Yuba River also needs extensive physical improvement. 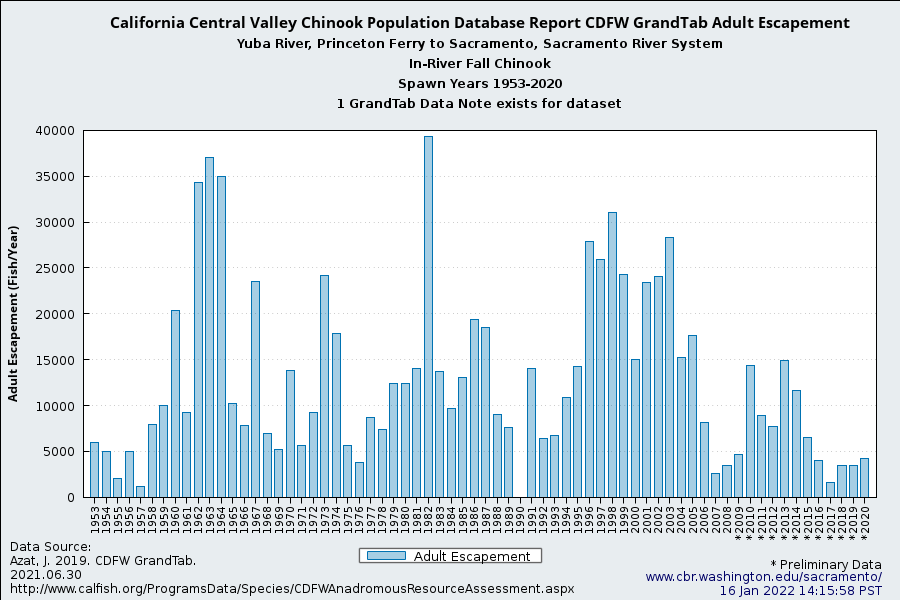 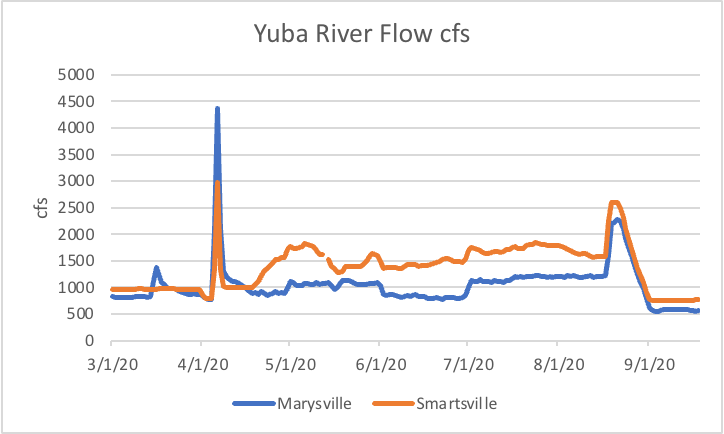 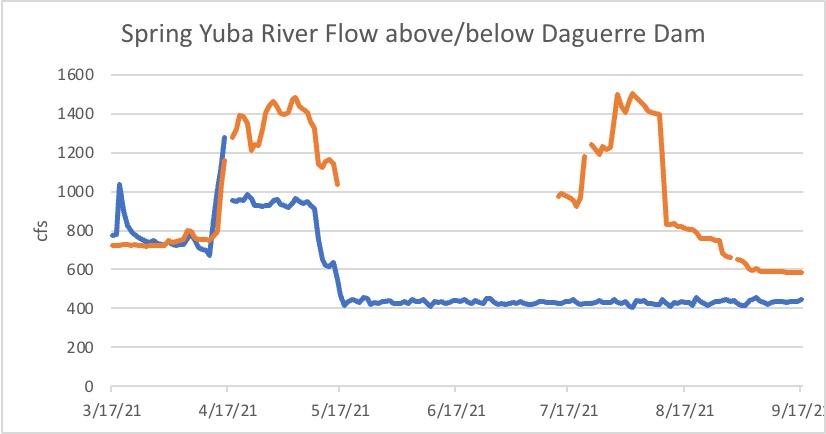 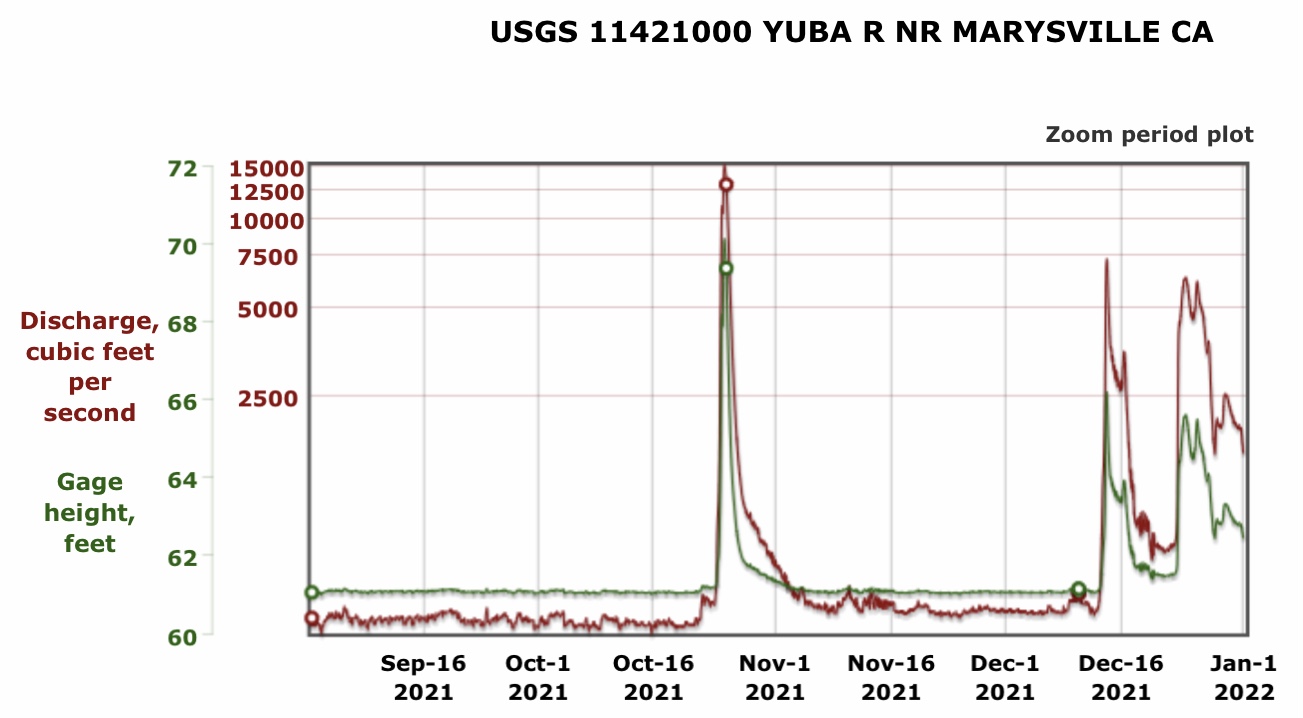 A January 1 article in the Bee noted federal and state Delta pumping plants were “throttled back” in late December to protect the nearly extinct Delta smelt and other fish.  Exports had reached 9000 cfs from December 17-19, 2021, and then cut to 2000 cfs on December 20, despite high Delta inflows from the Sacramento River (Figure 1).  With the Delta Cross Channel closed in December and the False River Barrier in place, exports were drawing from the interior Delta via the Old and Middle River channels (Figure 2).  Most of that water was replaced via Georgianna Slough from the Sacramento River (7000 cfs) and San Joaquin River (1000 cfs).  The overall pattern from December 19 is shown in the map below. 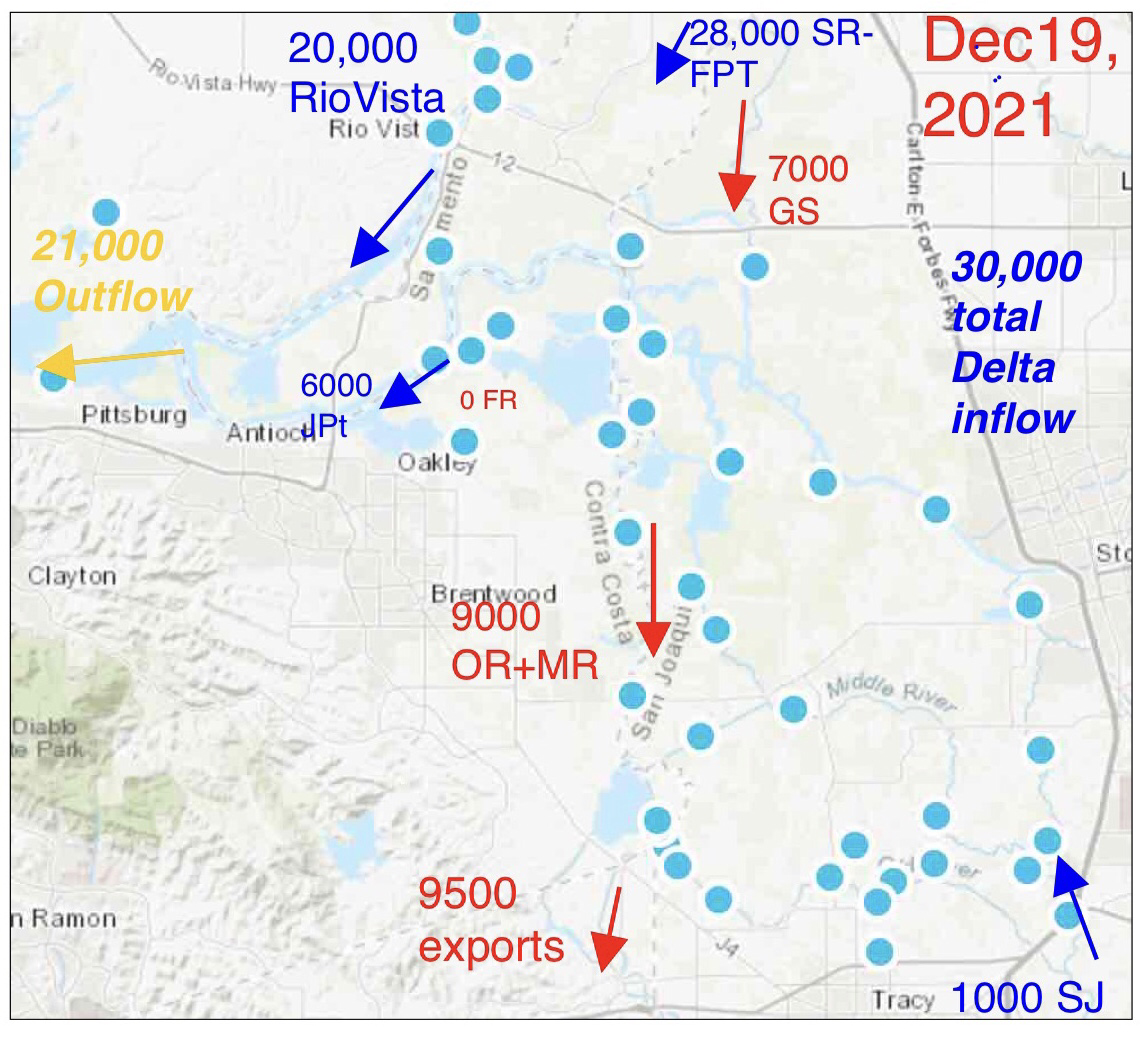 Map of daily average flow conditions in the Delta, December 19, 2021.

Export cutbacks in December were prompted by the federal ESA biological opinions to protect Delta smelt, as well as winter-run and spring-run salmon from the Sacramento River.  Adult smelt move up into the interior Delta from the Bay with the first late-fall, early-winter runoff events.  Juvenile salmon move downstream to the Delta during these same early storm events and move into the interior Delta via Georgianna Slough.

Historically, exports were maxed-out near 11,000 cfs during December storm flows to refill San Luis Reservoir in the San Joaquin Valley after the irrigation season.  But such high exports resulted in heavy losses of smelt and salmon at the south Delta pumping plants (Figures 3 and 4), prompting the mandates in the biological opinions for export reductions.

San Luis Reservoir at the end of December 2021 was only at 30% of its 2 million acre-feet capacity; when the historical average for December has been 60%.  There is strong pressure to refill the reservoir.  On the other hand, the smelt and salmon are endangered species on the verge of extinction after several multi-year droughts in the past 15 years.  The smelt and salmon are in the Delta now, and need protection, whereas San Luis still has a chance of filling this winter under the allowed exports if 2022 continues normal or wet.  Because Federal and state laws mandate protecting the endangered fish and the biological opinions specify priority be given to the fish under these specific circumstances, export restrictions are the appropriate prescription. 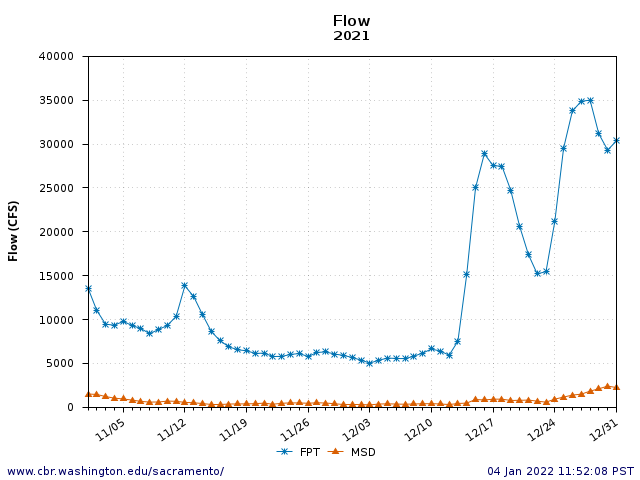 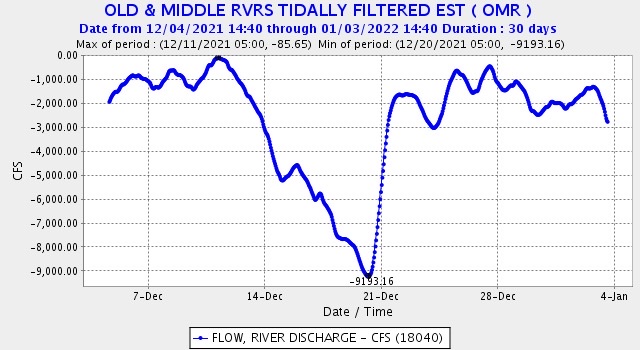 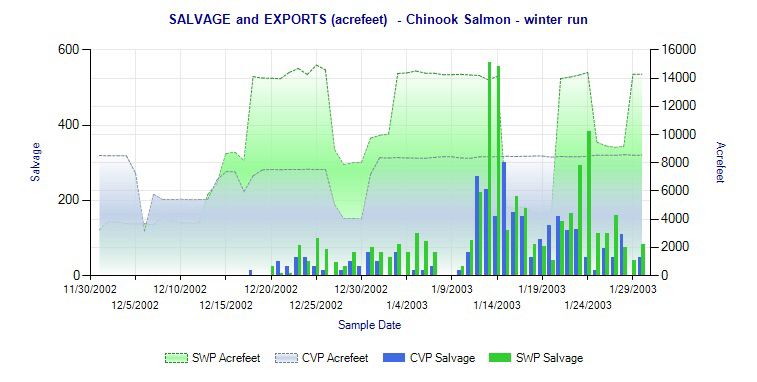 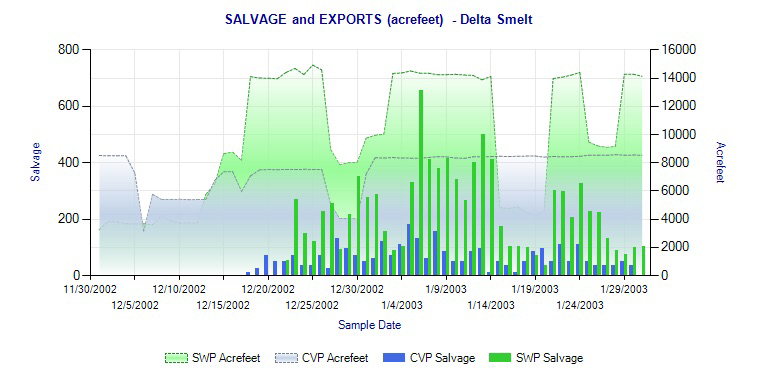