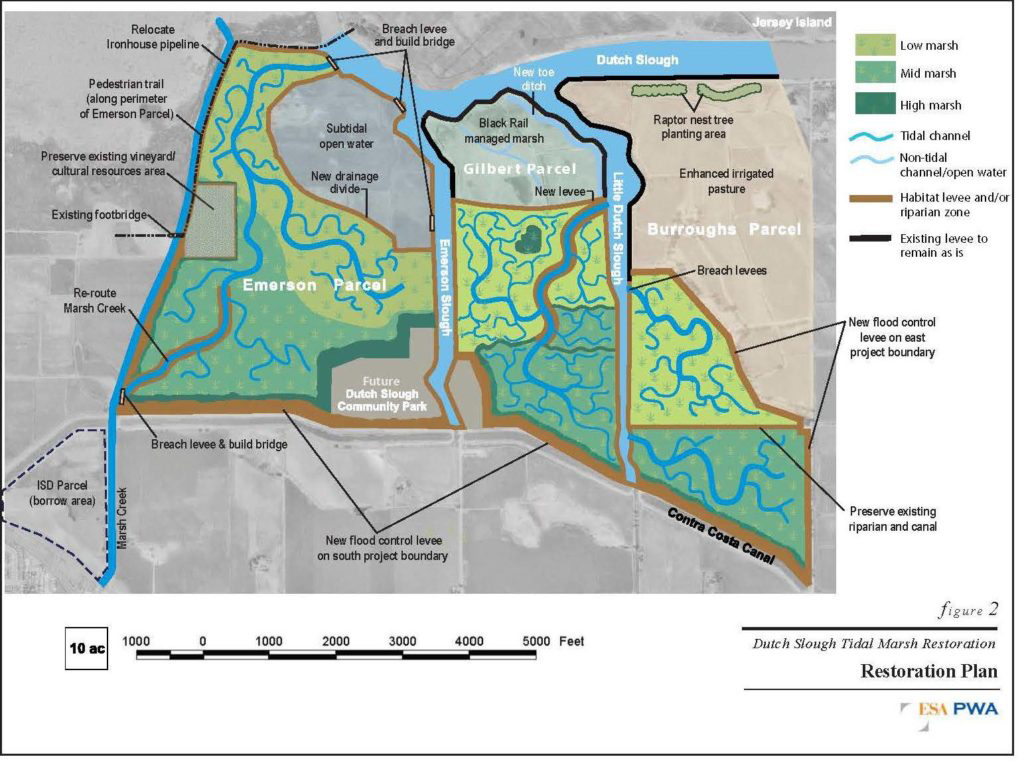 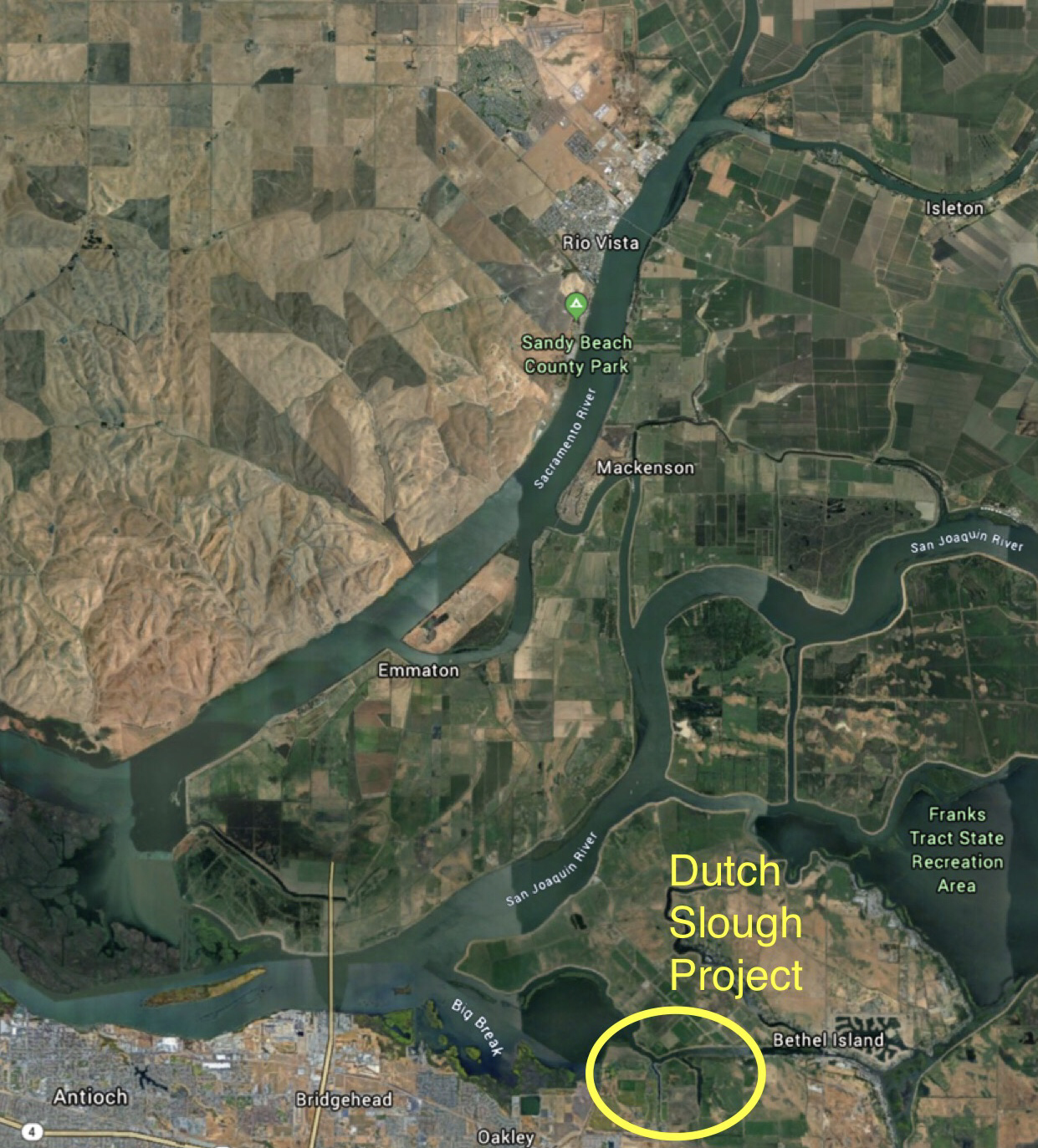 Common sense says salmon recovery efforts should focus on the most important factors that control fish population dynamics. In reviewing Central Valley population dynamics, I have seen each life stage and each individual controlling factor become important at one time or another. In my experience, the estuarine rearing and migrating stage is an essential component that is not given enough attention.

Central Valley salmon populations are nearly all “ocean-type” Chinook salmon, meaning they move to the ocean usually during their first six months of life, with substantial estuary rearing as fry, fingerlings, and pre-smolts. That is not to say that yearling smolts contributions are not important. It is that they are a minor contribution in “ocean-type” Chinook (note that late-fall-run are “river-type”).

I have always believed the survival of wild salmon fry in the Bay-Delta to be a key limiting factor in wild salmon production in the Central Valley. Hatcheries have kept smolt numbers to the ocean up, while the survival of wild salmon eggs, fry, fingerlings, and smolts has worsened. Fry-fingerling estuary survival is important, if only in the sense of sheer numbers and the resulting potential to increase overall smolt production. This is true for fall-run, spring-run, and winter-run populations. There is substantial evidence that returning wild adult salmon are predominantly from the estuarine-reared groups. Such evidence exists from fish surveys, scale analyses, and genetic studies. Thus, a recovery program for wild salmon should include a strong focus on estuarine rearing and survival.

My beliefs are shaped in large part from my personal experiences in conducting winter seine and screw trap surveys throughout the Bay-Delta and lower rivers. Young wild salmon classified as fry and fingerlings, 30-50 mm (1-2 inches), dominate the inshore landscape and screw trap collections. Millions of fry and fingerlings pour out of the spawning rivers and tributaries into the main rivers and into the Delta, where they dominate the winter fish community. Larger, more elusive pre-smolts, mostly winter-run, are also present in smaller numbers, but in numbers important to the winter-run population. Yes, there are millions of fry left to rear in highly regulated and disturbed river habitat, but their overall numbers are fewer, with less potential for ultimate survival to smolts entering the ocean than their estuarine counterparts.

One of the better indicators of the general pattern of estuarine use by salmon is fish salvage collections at the massive federal and state pumping plants in the south Delta. As shown in Figure 1, December is important in the estuary for winter-run and late-fall-run pre-smolts and yearlings, respectively. The January through March period is important for spring-run and fall-run fry/fingerlings. The April through June spring period is important for spring-run and fall-run pre-smolts.

The State Water Resources Control Board is in the process of revising water quality standards in the Bay-Delta watershed.1 Salinity, flow, water temperature, and export-limit standards need updates to protect salmon using the Bay-Delta through the winter and spring. Such protections will be key to wild salmon recovery in the Central Valley. 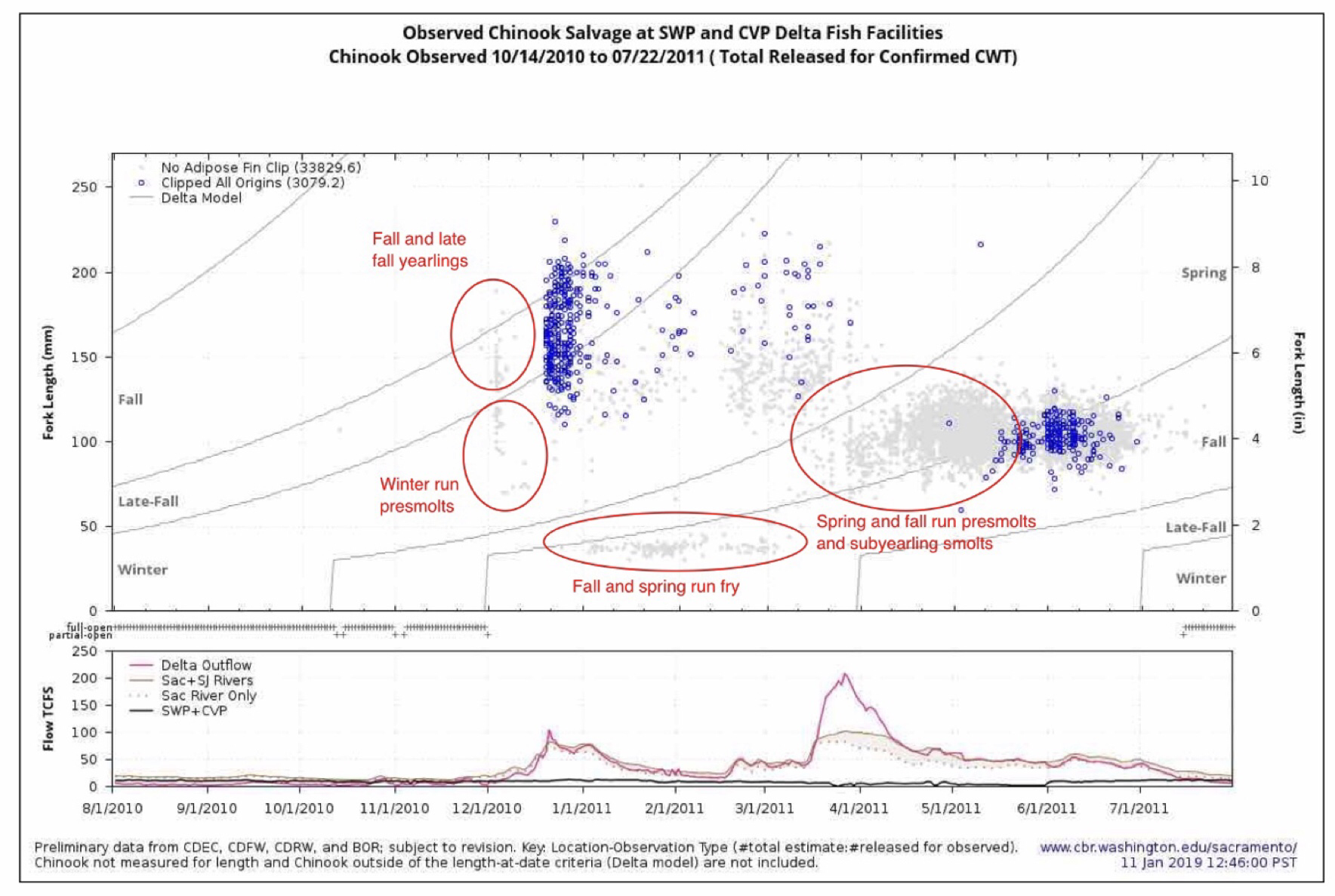 A just-released UC Davis Study1 concludes that the decline in the Delta pelagic open water habitat and fishes is strongly related to non-native clam invasions and water exports. This long-held theory now has strong supporting evidence.

In their study paper, the authors reviewed five theories on the decline in estuary productivity:

The paper concludes there is “a growing consensus that the decline in pelagic fish abundance in the SFE is at least partially due to a trophic cascade, triggered by declining phytoplankton (Feyrer et al. 2003; Sommer et al. 2007; Hammock et al. 2017; Hamilton and Murphy 2018)”.

The authors noted that “the suppression of phytoplankton abundance due to exports cannot be reversed with equivalent releases from upstream reservoirs. Releasing water in late summer/fall increases flow, which decreases residence time, and therefore suppresses phytoplankton abundance (Table 2, Fig. 6).” This finding is extremely important because the primary form of mitigation for Delta exports has been maintaining outflow by increasing inflow with reservoir releases.

The study’s analyses strongly indicate that the decline in estuary productivity is associated with the clam invasion and increasing exports over the past five decades. The effects are most pronounced in non-wet years when fish production is most negatively affected.

There are factors not discussed in the study paper that deserve mention: 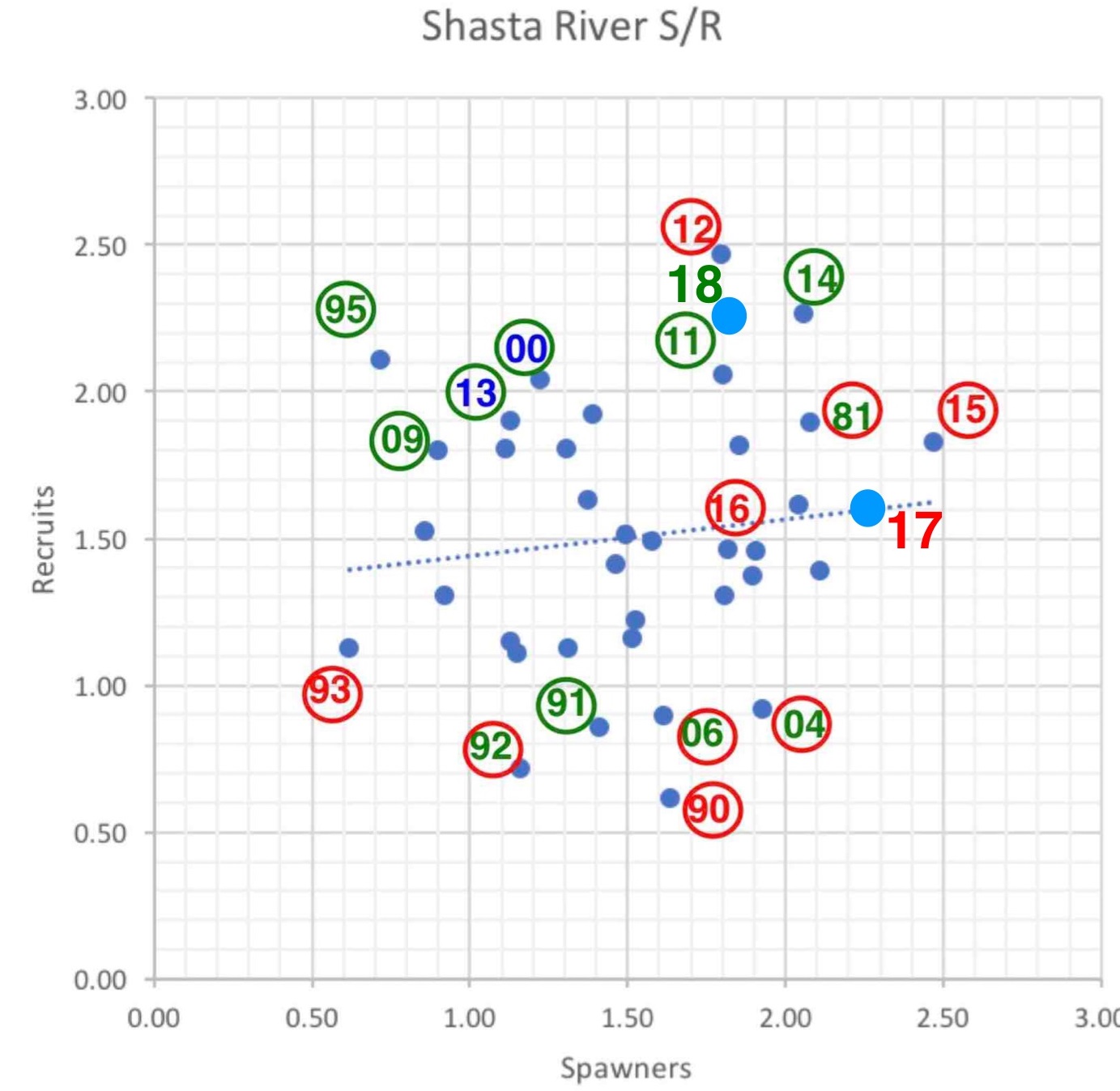 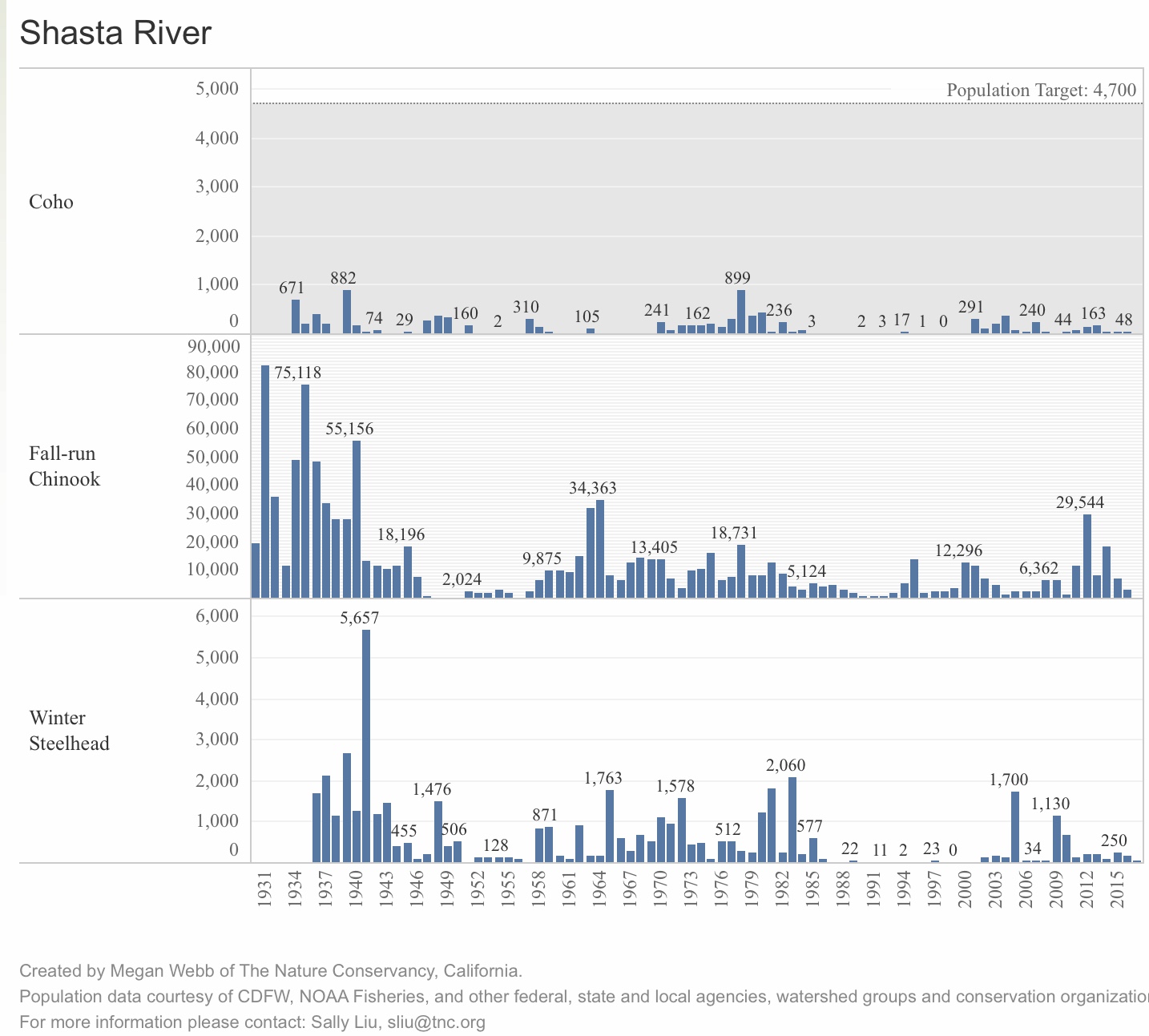 Dr Hobbs also addressed the question: HOW WILL FLOW AUGMENTATION AFFECT THE DELTA SMELT?
“The answer generally is that it will have an effect if the flows will actually reduce salinity, increase turbidity or reduce temperature.” They found that flow affects salinity, but temperature and turbidity not so much.

My answer to the question about the effect of flow on Delta smelt is that flow is extremely important to salinity, water temperature, and turbidity, as thus Delta to smelt survival and population abundance.