A nice spurt of Delta inflow and outflow occurred during mid-March 2020 (Figure 1). In past dry winters, this would have been a life saver for many juvenile salmon and smelt in the Delta. But this March brought no miracles for Delta fish. Without new rules for the State Water Project (SWP), the Project’s Banks pumping plant in the south Delta maxed out exports (Figure 2), just like the SWP did after last December’s storms.1  March exports have been just below the maximum export-to-inflow (E/I) ratio allowed by the State Water Board (35%). From 2009 through 2019, the state’s incidental take permit (ITP)2 limited exports by restricting negative flows in Old River and Middle River (OMR restrictions) to protect the state-listed longfin smelt and Delta smelt. Not so in the winter of 2020.

Meanwhile, the state’s soon-to-be-released new ITP looks like it will divert the discussions that the Smelt Working Group used to have to an in-house colloquy between the Department of Water Resources and the Department of Fish and Wildlife. The ITP also has provisions to allow more negative OMR’s and thus higher levels of exports during storm events. This will make fish in the Delta more dependent on miracles even as miracles become harder to come by. 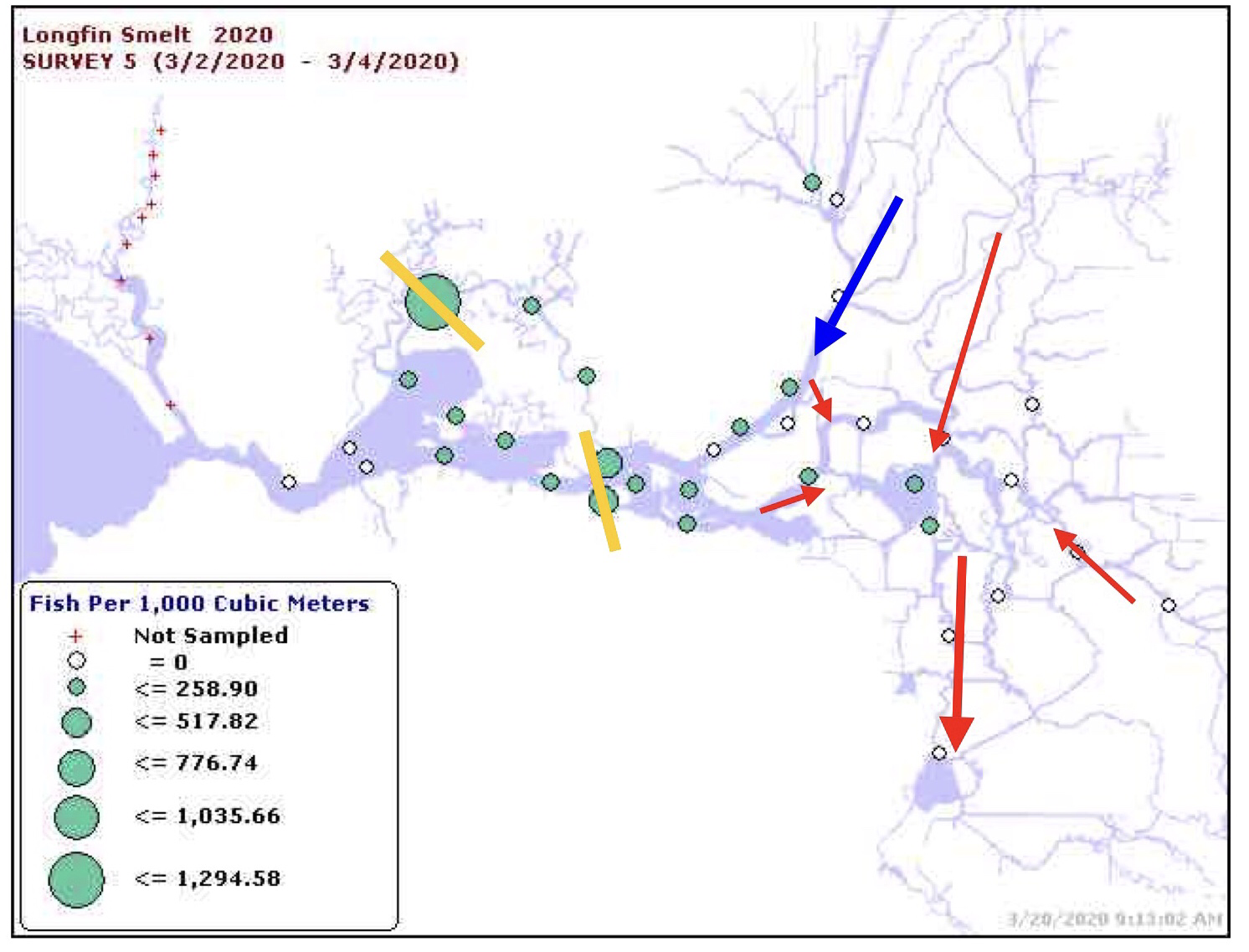 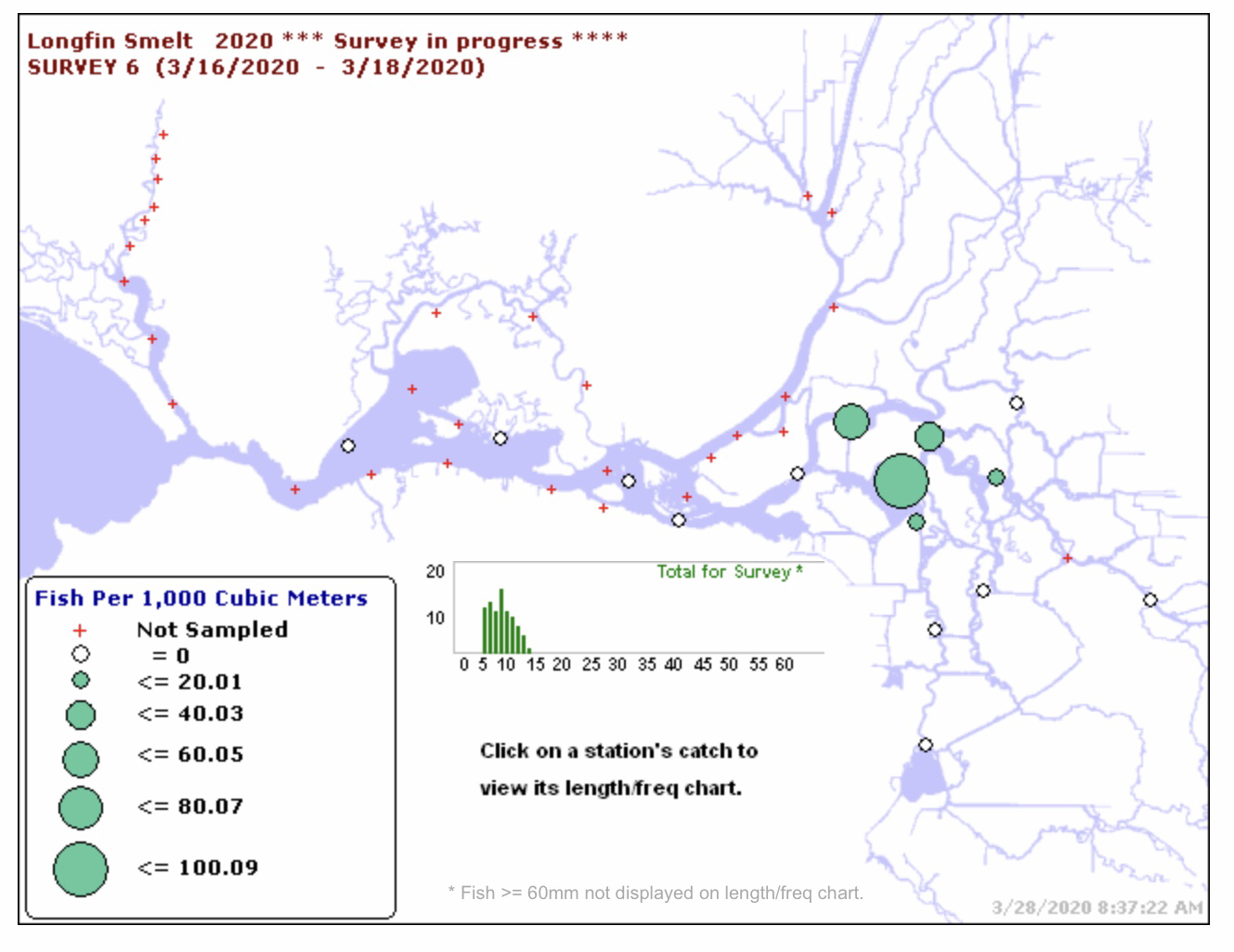 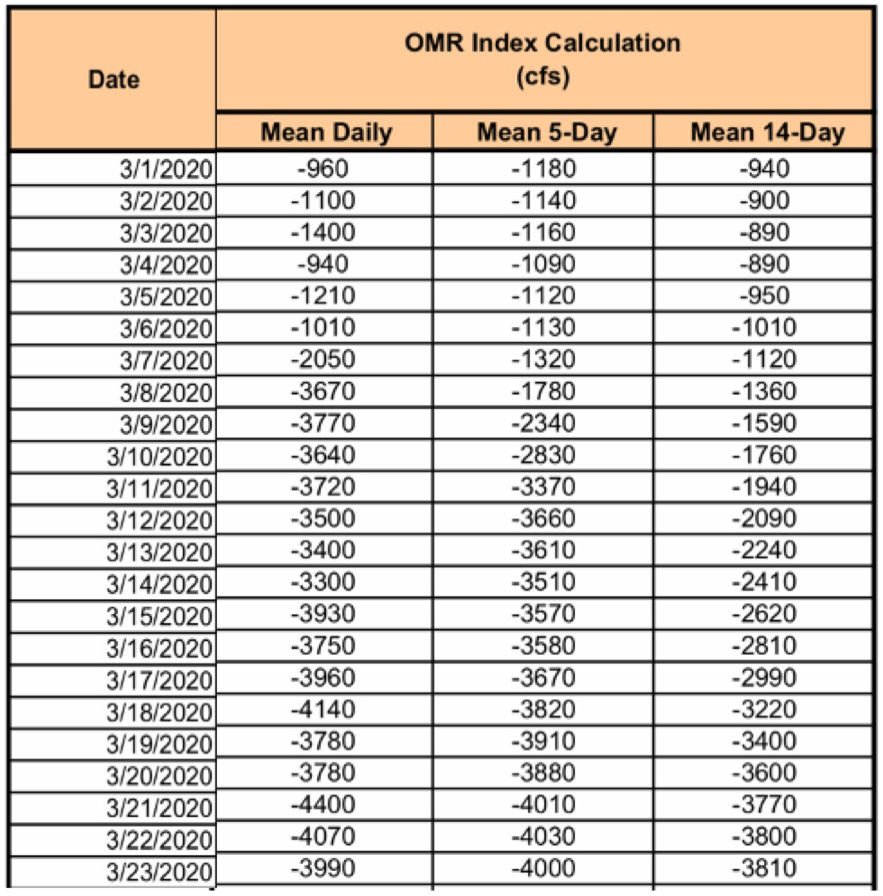 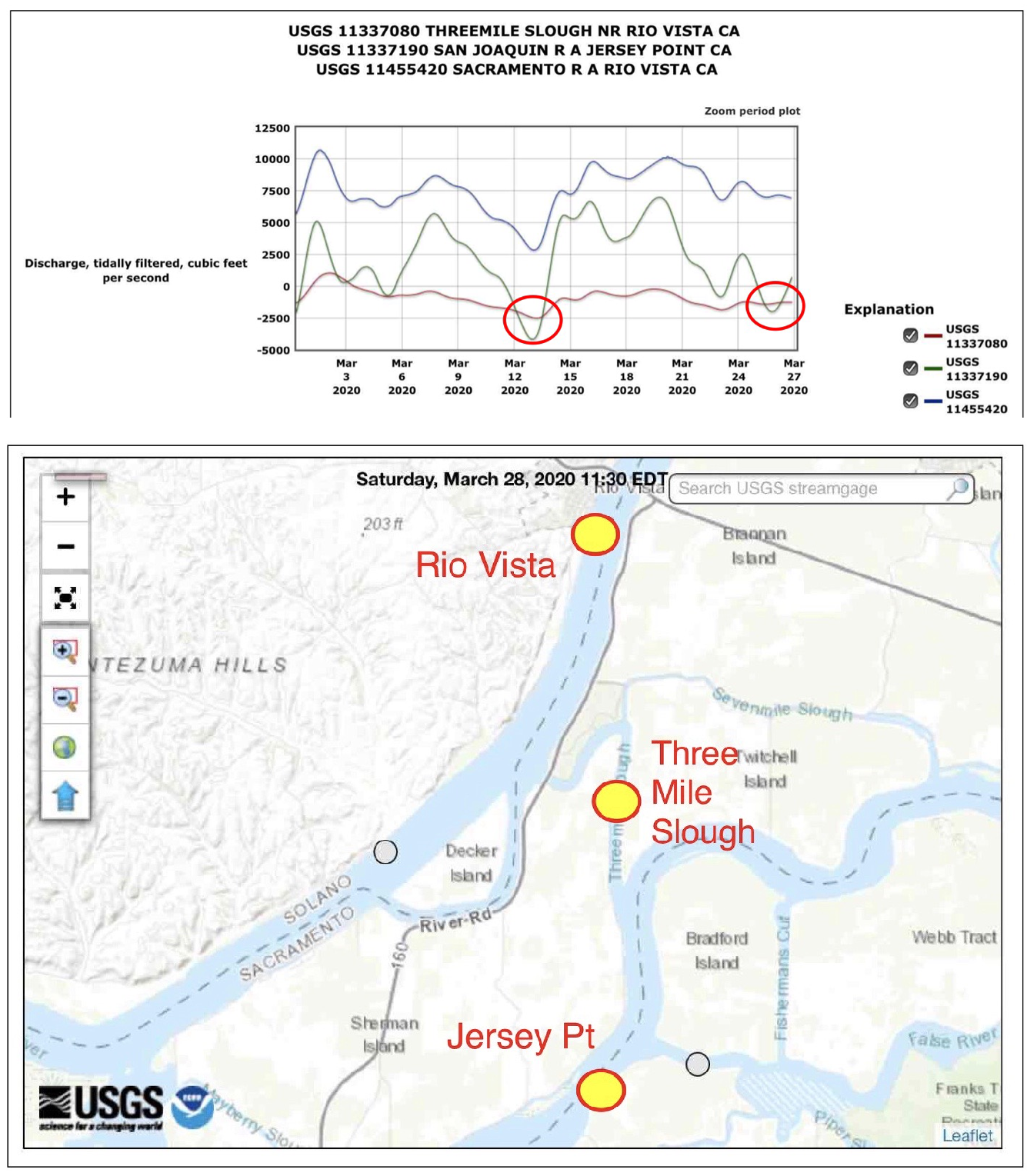 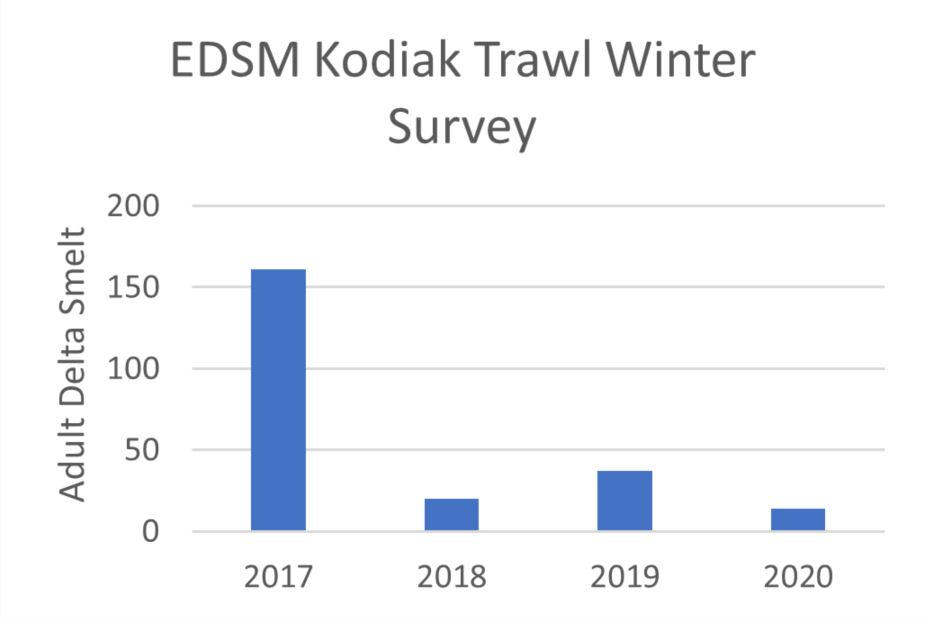 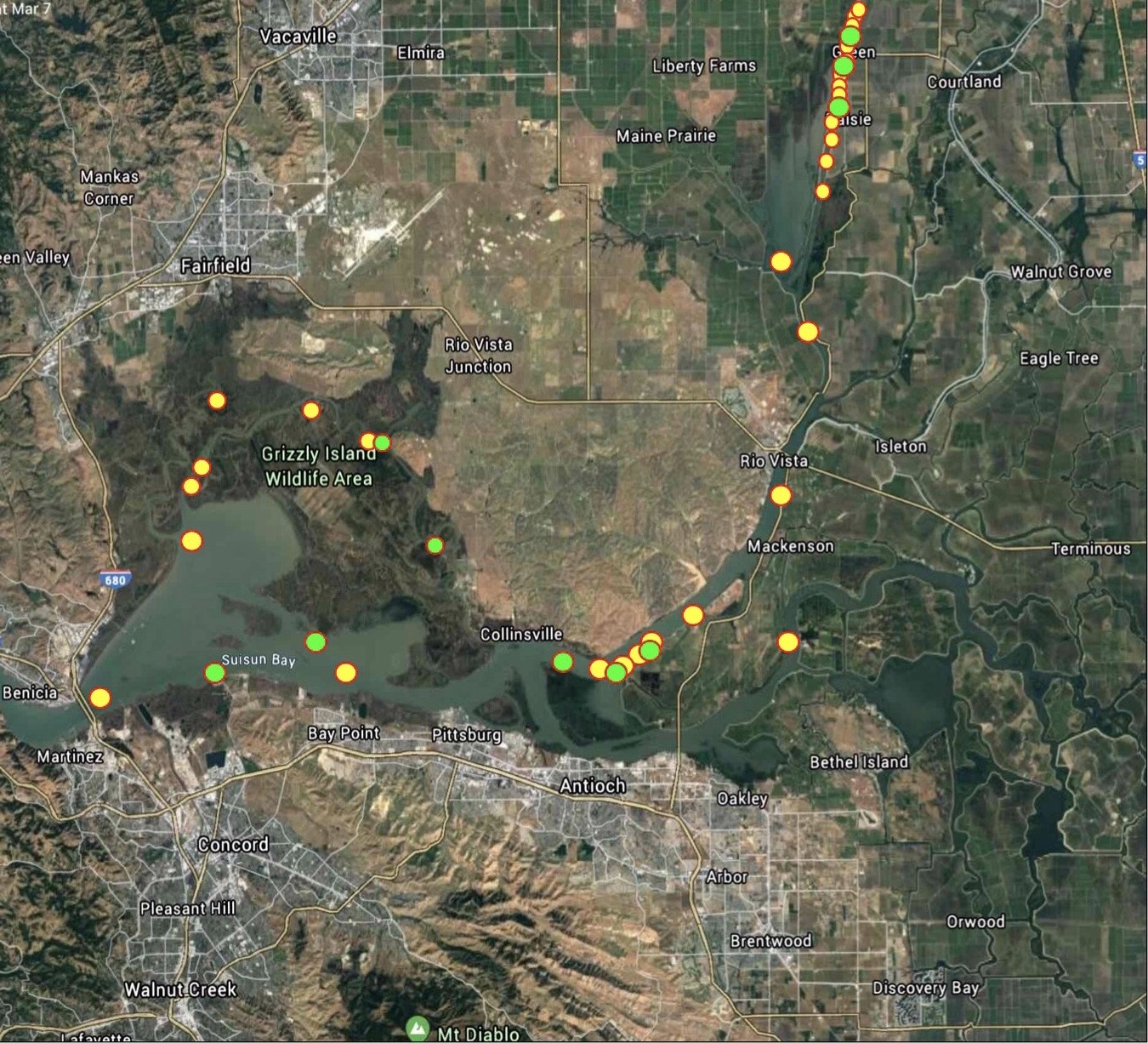 One of the ramifications of dry conditions in winter 2020 has been the need to cut Delta exports to protect salmon and smelt listed under the state and federal endangered species acts. Lack of rain has led to reduced Delta inflow and outflow (Figure 1), which in turn has required reductions in south Delta exports (Figure 1), per the state’s 2009 incidental take permit and the 2019 federal biological opinions.1

The state permit requirement is prescribed to protect longfin smelt, which need protection under the present circumstances (Figures 2 and 3). The permit’s mitigation prescription (Figure 4) is to limit exports by limiting how negative flows in Old and Middle River (OMR) in the central Delta can get. Under the permit, negative OMR flows have generally been limited as early in the year as February in dry years like 2020; this limits exports and maintains Delta outflow. OMR flows were limited this winter (Figure 5). The mid-February survey (Figure 6) indicated a continuing risk that smelt larvae would be drawn into the central Delta if exports were increased. Exports have in fact increased (Figure 1) and OMR flow has become more negative (Figure 5) in March, increasing the risk to smelt despite being within limits set (Figure 4). March surveys should portray the effect of the increased risk factors.

The new federal take permits (BOs) are supposed to protect listed winter-run and spring-run salmon, Delta smelt, and steelhead, as well as the essential habitat of all the salmon, whose young are found in large numbers in the Delta in winter (Figure 7). Protections for these fish under the new BOs are vague at best.

Meanwhile, the state is in the process of developing a new incidental take permit that will cover winter-run and spring-run Chinook salmon and Delta smelt as well as longfin smelt. The risks to Delta fish are real. To be effective, the new ITP at minimum should not let spring outflow from the Delta fall below 10,000 cfs, and it should require maintaining February OMR levels during periods of low Delta inflow at the levels they were in February 2020 (Figure 5). This greater level of export restrictions should be required in each year with low Delta inflows until such time as the longfin smelt have grown out of the larval stage and moved downstream into the Bay. Even this level of protection may not protect the population from significant losses. 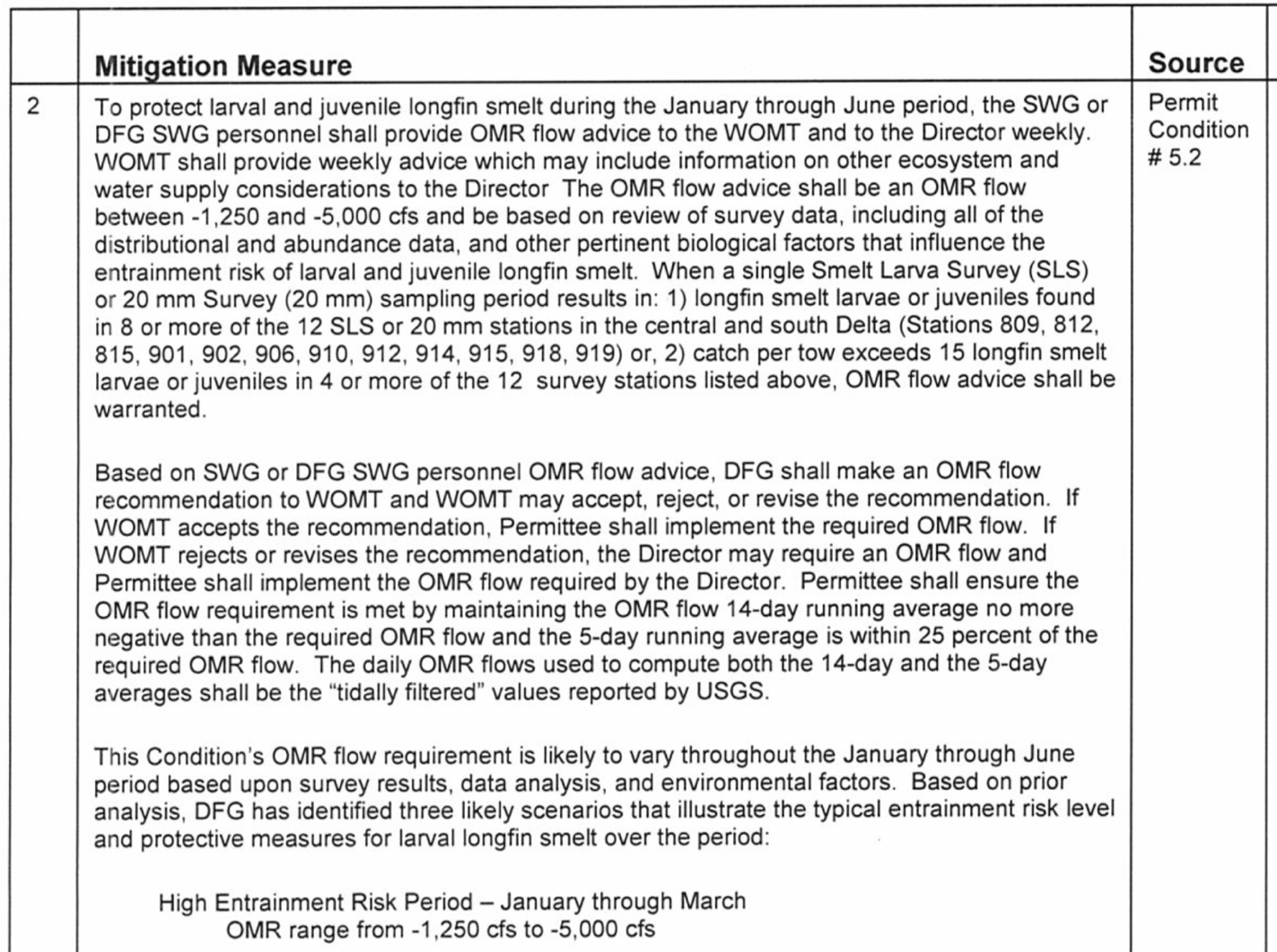 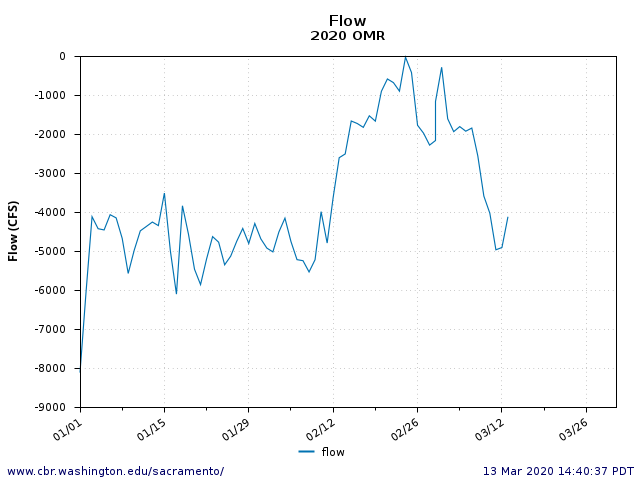 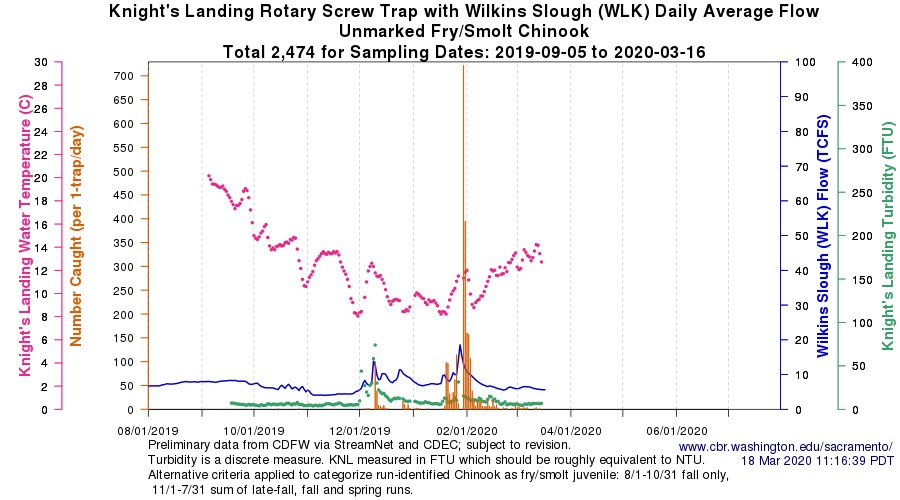 California’s Attorney General has sued the federal government over the new federal biological opinions for the operation of the Central Valley Project (CVP) and the State Water Project (SWP). But in fact, the State’s plan for operating the Central Valley operations of the State Water Project is not much better than the Bureau of Reclamation’s federal plan in terms of protecting Delta fish. The State’s plan is built on the same theory that the water projects can divert more water by monitoring fish presence and backing off on diversions when monitoring detects fish. This so-called “real-time operation” was also the foundation of the Department of Water Resources’ (DWR) proposal to protect fish in the 2016-2019 hearings on DWR’s proposed Delta tunnels (“WaterFix”).

The major difference between the new state and federal plans for Delta operations is that the State plan retains a requirement for increased flow in the summer and fall of wetter water years to protect smelt. The State’s draft EIR for the Long Term Operation of the State Water Project (LTO EIR) describes the proposed Summer-Fall X2 Action for Delta outflow (Figures 1 and 2). The action/criteria proposed is to maintain “X2” (the location in the Bay-Delta where salinity measures ~2 ppt chloride, or 3800 EC) under prescribed limits in summer and fall months by water-year type.

The LTO EIR describes two alternatives: the Proposed Project and Alternative 4.1 Both would limit monthly average or 14-day average X2 at river kilometer 80 (near the CDEC Collinsville gage). The Proposed Project includes only September and October X2 objectives, while Alternative 4 also covers June-August for wet years. Under both alternatives, criteria also include opening the Suisun Marsh Salinity Control Gates (SMSCG), an action to reduce EC at Collinsville gage and in Suisun Marsh and Montezuma Slough, which would raise salinity in eastern Suisun Bay.

I discussed the ramifications of the federal Biological Opinions in a September 2019 post. The only major beneficial change that the LTO EIR proposes is adding summer X2 criteria in Alt 4 to extend outflow protection from June 20 to August 31. The new Fall X2 requirement (September-October) in the LTO EIR would be less protective than existing Fall X2 objectives, because the new state requirement would move the compliance point upstream from km74 to km80.

In order to understand how the state’s proposed new Summer-Fall X2 requirement would work, I examine below how the action might have applied in recent water years 2016-2019, two below normal water years and two wet water years..

Under the LTO EIR criteria (both the Proposed Project and Alt 4 alternatives), the X2 location and low salinity zone would be similar to historical 2016 conditions (Figure 3), except that outflow could be lower and salinity higher in June, when there would be higher exports, less outflow, and a warmer more upstream low salinity zone (Figure 4). The main benefit of the X2 Action under Alt 4 would be that it would extend the D1641 agricultural salinity standards past June 20 by making them also apply from June 20 through August. Both the D1641 and Alt 4 criteria allow significant daily variation in X2: 14-day and monthly averages.

In 2018 (Figure 5) there would be a similar potential negative effect in June and a positive benefit in August under Alt 4.

Under the proposed LTO EIR criteria for wet years, Fall X2 criteria (September-October) would be the same as described above for below normal years. This would weaken protection in comparison with the previous Fall X2 requirements in the 2008-09 biological opinions (Figures 6 and 7). Summer (June-August) criteria would be generally less protective than existing D1641 salinity standards for wet years. If the State were to adopt the LTO EIR summer criteria, salinities would be higher and the low salinity zone further upstream and warmer than occurred in June-August of wet years 2017 and 2019. This would allow higher exports.

Under both the Proposed Project and Alternative 4, the LTO EIR’s Summer-Fall Proposed Plan for Delta outflow (Figures 1 and 2), Delta outflows would be lower, south Delta exports would be greater, and the low salinity zone further upstream and warmer in the fall (Sep-Oct) of wet years. Such changes would be highly detrimental to salmon and smelt. In below normal years, outflows may be higher from June 20 through August under Alt 4. Such changes would be beneficial to salmon and smelt.

Operation of the SMSCG would lower EC at Collinsville and in Montezuma Slough and increased EC in eastern Suisun Bay. This would be detrimental to smelt rearing in Suisun Bay. For more detail on this issue, see http://calsport.org/fisheriesblog/?p=2813.

Overall, the State’s plan would weaken existing X2 compliance criteria and result in higher exports of water from the south Delta in September and October in wet years. Alternative 4 would potentially provide more summer outflow in below normal years, which currently have no summer ag-salinity standard. 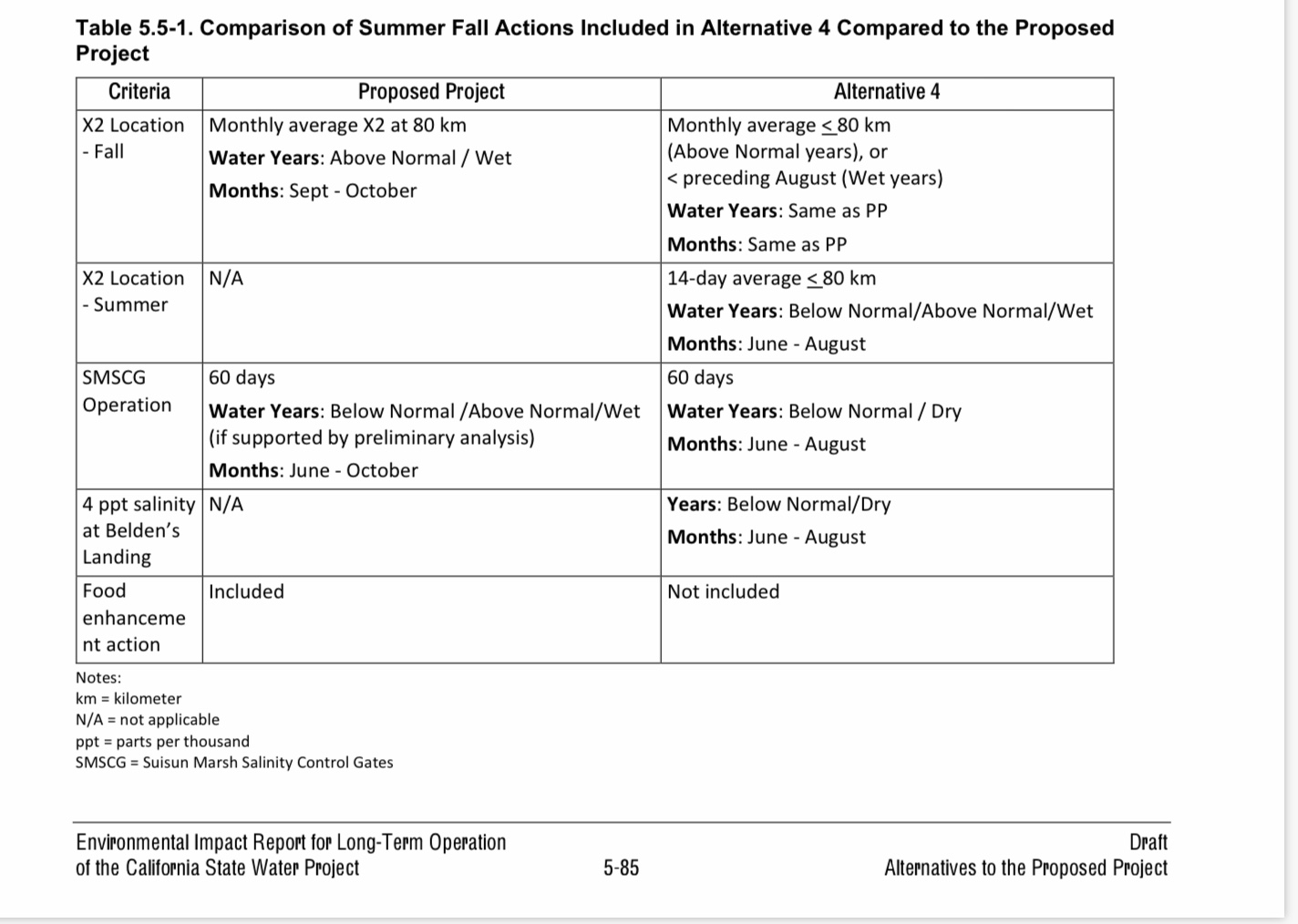 Figure 1. Comparison of Summer-Fall actions for the Proposed Project and Alternative 4. 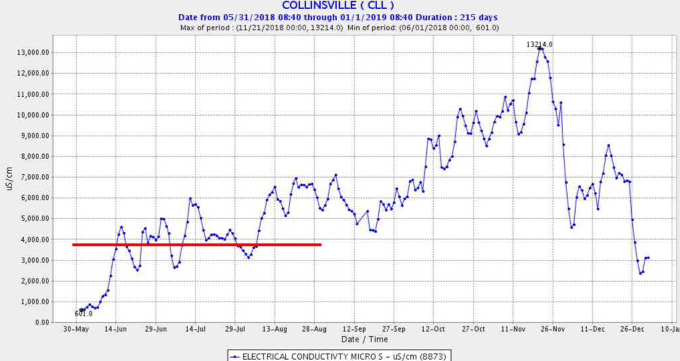