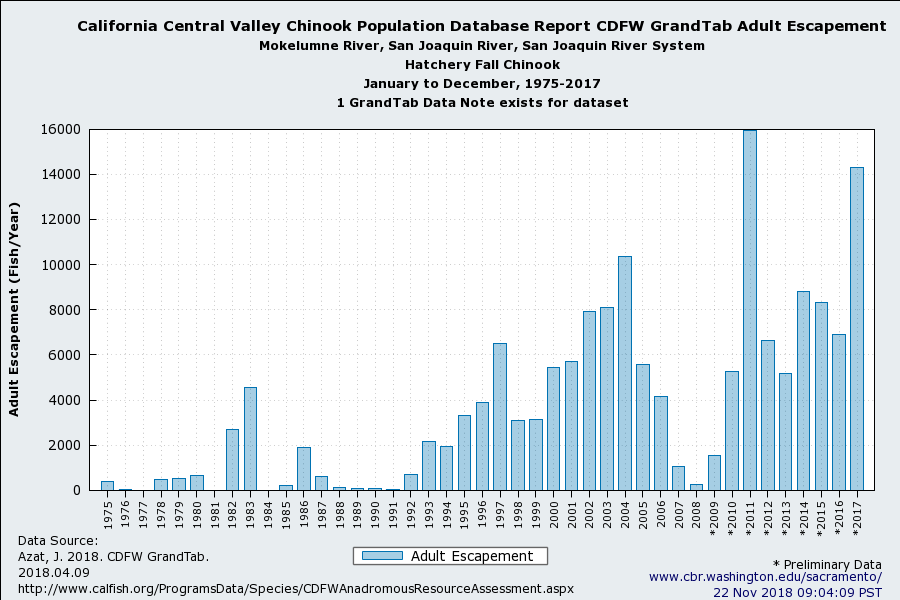 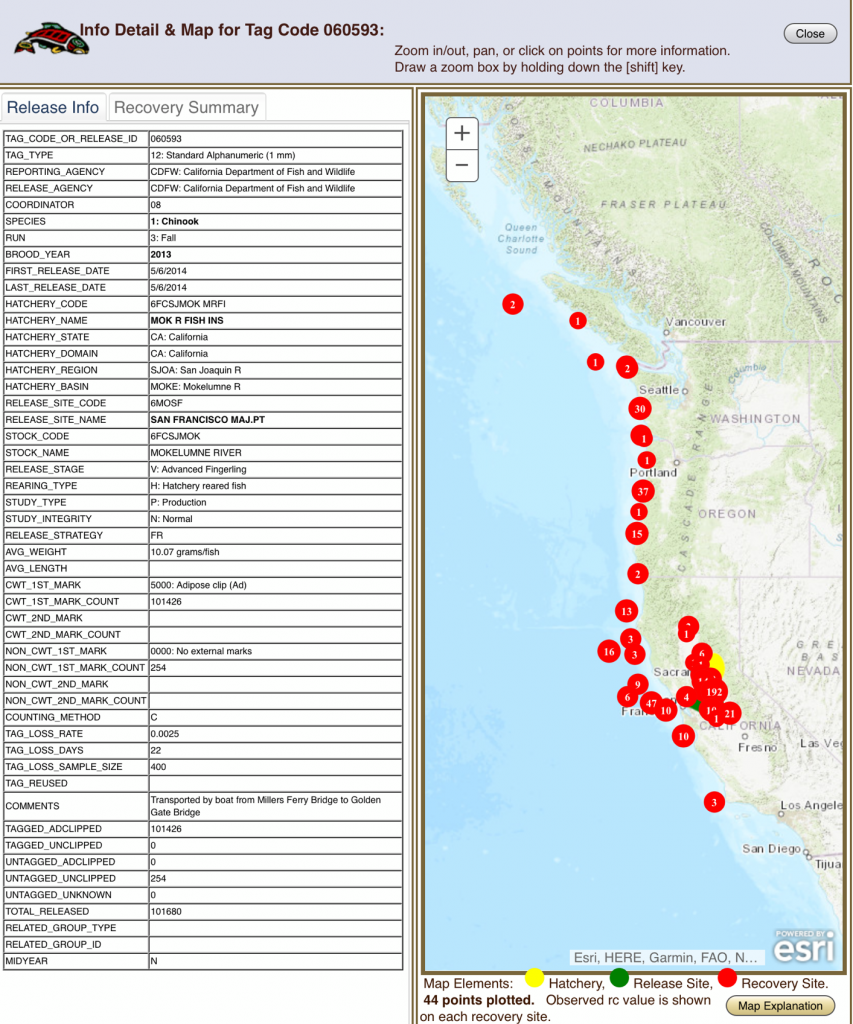 First, wild or naturally spawning stocks or runs of fall-run Chinook salmon in Valley rivers are all dominated by hatchery salmon. Without hatcheries and straying of hatchery salmon to non-hatchery rivers (e.g., Yuba, Cosumnes, etc.), there would be almost no salmon runs of significance.

Third, the “lifetime reproductive success” potential of wild fish is primarily compromised by water and fisheries management. Flows are too low, and fisheries continue harvesting much of the wild salmon production.

Fourth, the recent salmon population crashes of 2009 and 2016 are blamed by many salmon scientists on poor ocean conditions, with little regard for poor river habitat or water management as contributing factors, let alone hatcheries. By contrast, the federal Battle Creek hatchery managers knew they had to truck some of their smolt production to the Bay during the drought because of poor river conditions if they hoped for some survival and contribution to future runs.

The authors of the paper imply that hatcheries are the problem. No doubt the hatchery programs could be improved to lessen their negative effects and improve their contribution to salmon recovery. But for sure the fault is not with the hatcheries. Lack of support for hatcheries by scientists and resource agencies will dry up hatchery funding by water-user entities and make the problem worse.

The paper’s authors conclude: “There is a growing concern that salmon populations in the C[entral] V[alley] of California are becoming dependent upon hatchery supplementation, a conservation status recently identified as “mitigated extinction” Baumsteiger and Moyle 2017).” California salmon have been dependent on hatcheries for many decades. This is not a new development. Dams and diversions wiped out the wild salmon and their critical habitats, while hatcheries kept the dream going. Now scientists want to take the dream away.

Give the authors some credit for ending by saying: “Hatcheries can play a key role in the recovery of wild stocks, supplementing the fishery, and the reestablishment of natural areas, but only with cautious and appropriate management.” Despite the ambiguity, I had similar recommendations for improving hatchery programs in a recent post. 1

In a past May 2018 post I described how fall-run salmon redd dewatering was a key factor in the poor wild salmon production in the Sacramento River during the two prominent salmon population crashes in the past decade. This problem is again occurring in fall 2018 (Figures 1-3). The close to 50% drop in flow releases from Shasta Dam since late October and the corresponding 2-to-3 foot drop in water level is causing redd stranding of spring-run and fall-run salmon in the spawning grounds of the Sacramento River below Shasta.1

Despite nearly filling this past spring, Shasta Reservoir was drawn down over the summer and fall (Figures 4 and 5). The decline is unprecedented and is more typical of critical drought years. I recognize the concern for Shasta storage, but Reclamation’s decision to provide 100% water allocations under low snowpack conditions has again compromised Sacramento River salmon production. Figure 1. River flow (cfs) below Shasta/Keswick in the Sacramento River in fall 2018 along with long term average. 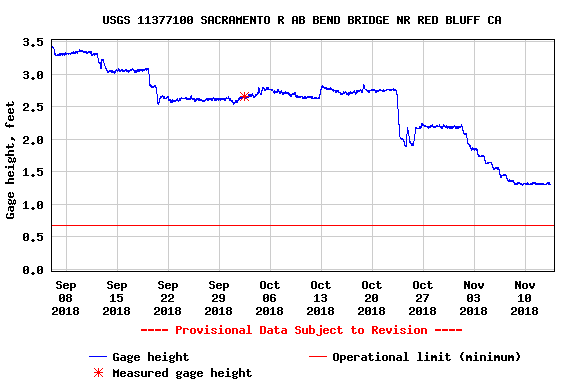 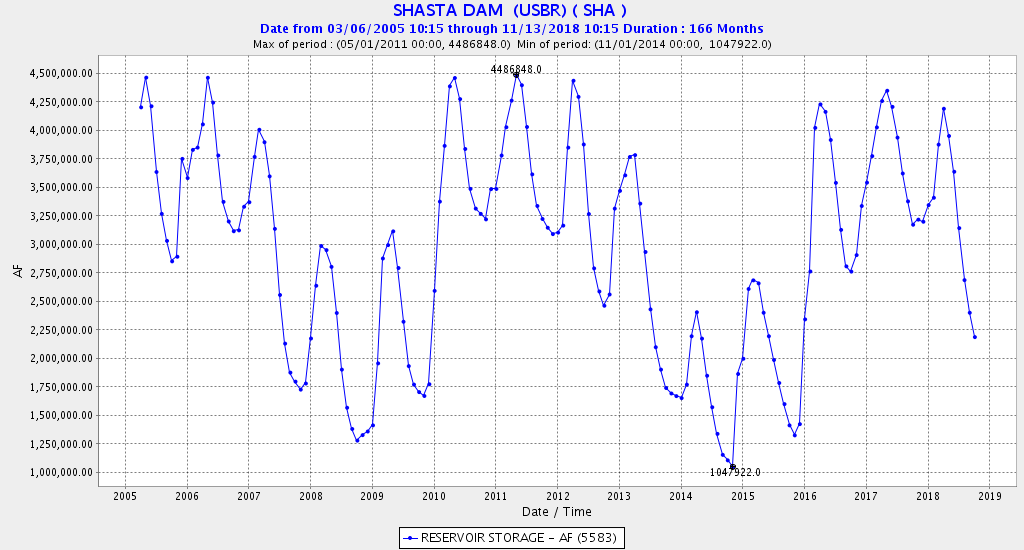 I plotted these numbers in a spawner-recruit relationship, with spawners being recruits three years earlier (Figure 2). The water year type during the first winter-spring following spawning is shown in Figure 2 by color. Winter-spring conditions reflect early rearing and emigration conditions in spawning rivers, as well as conditions in rivers downstream an in the Bay-Delta.

Factors contributing to poor recruitment in the eight critically dry years in the observed period include low river flows, high water temperatures, excessive predation, loss at water diversions, and low turbidity, all factors that are inter-related. Poor ocean conditions and hatchery operations also were likely factors, which may also be related directly or indirectly to river flows.

Most recent recovery efforts and planning have focused on habitat restoration.2 My own focus has been on poor river conditions (low flows and high water temperatures) and related predation.3 My reasoning is based on escapement trends over the past decade that indicate sharply dropping escapement during dry year low-flow conditions in most of the spawning rivers (Figures 3-5). 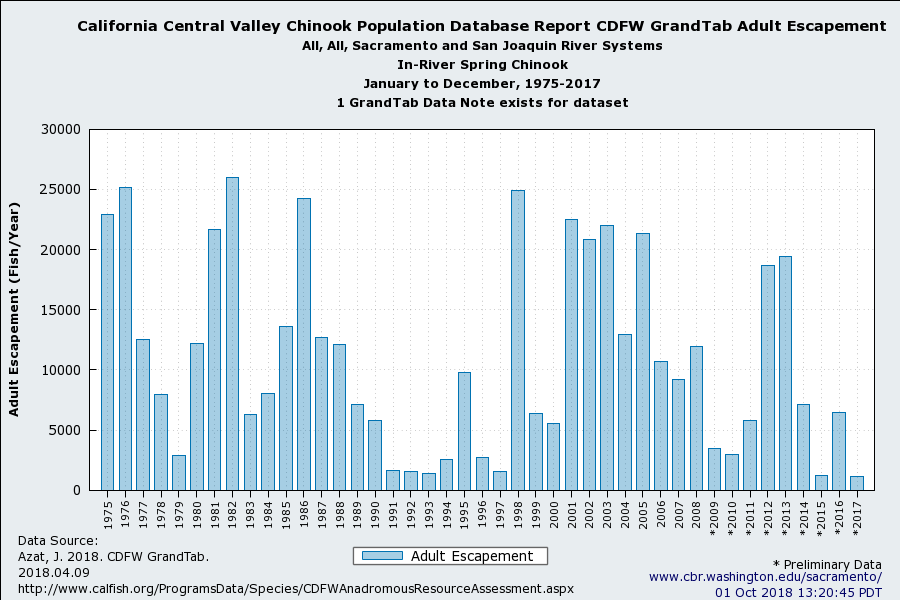 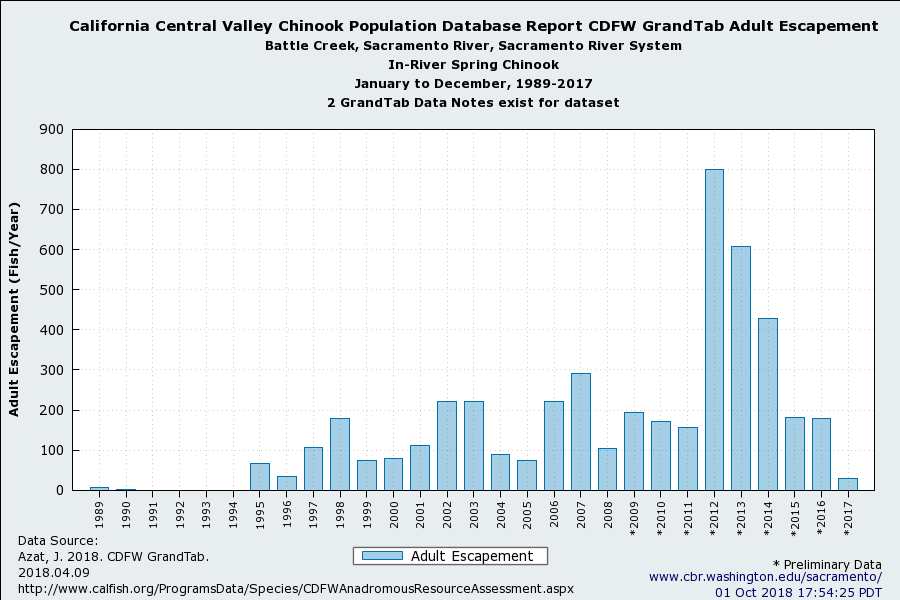 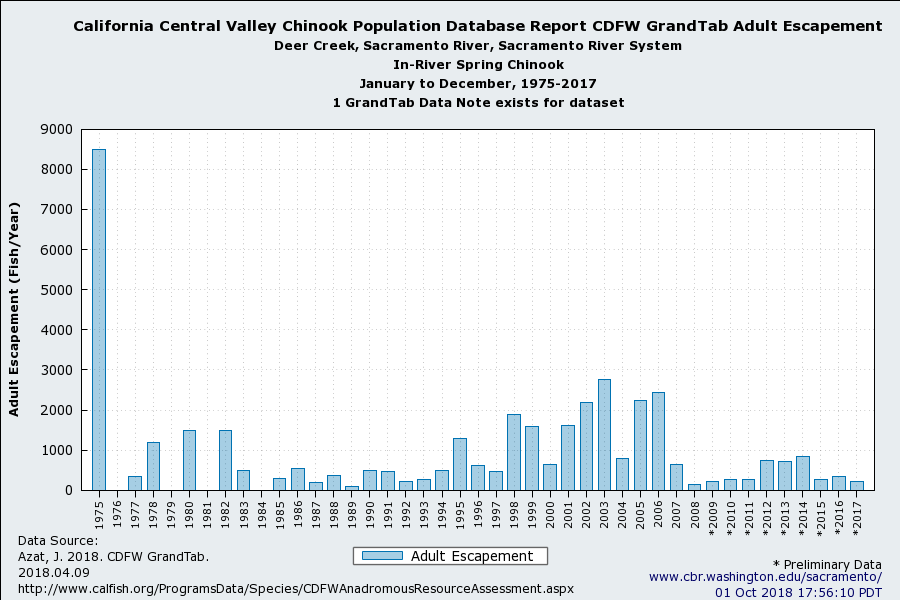 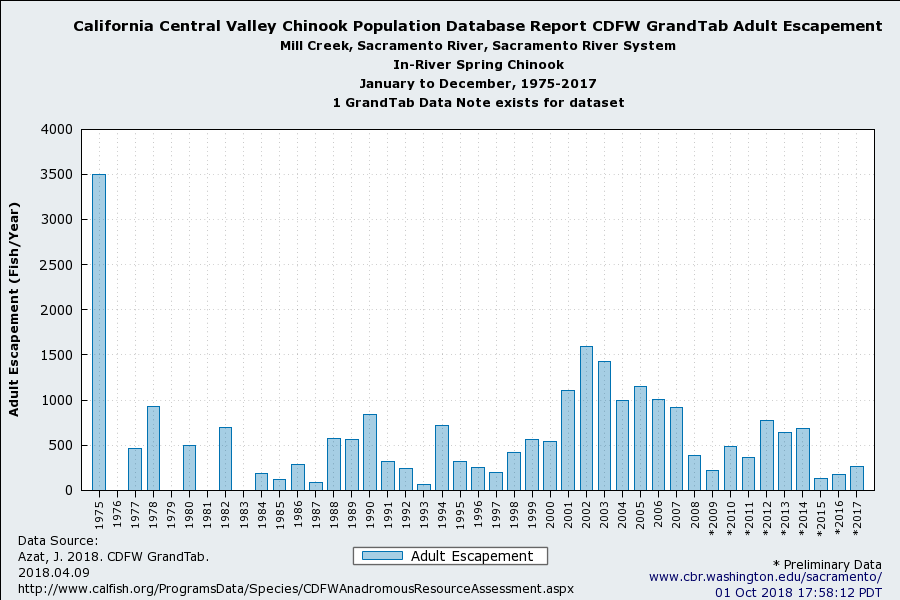 In the spring of 2014, 11,791 Feather River fall run Chinook smolts with tag code #060448 were trucked from the Feather River Hatchery and released to net pens in northern San Francisco Bay near Tiburon, California and the Golden Gate Bridge.  It was the middle of the historic 2012-2015 drought.  Somehow, an estimated 323 of these fished survived (2.74%) to be recovered in fisheries, spawning grounds, and hatcheries, including 68 back to the Feather River Hatchery (Figure 1).  The return rate for the Tiburon released smolts was over ten times that of the Feather River releases, five times that of Delta net pens, and over twice that of eastern San Pablo Bay pen releases (Table 1).  Similar results occurred from 2013 and 2015 Tiburon releases.  Results were even better from smolts barged from the Feather River to the Golden Gate in 2013.1

One wonders whether trucking and barging millions of smolts reared at the Feather and American River hatcheries would lead to more salmon commercial and sport fishery catches and improved spawning runs in the Feather and American rivers, especially during droughts.  Salmon run collapses during the 2007-2009 and 2013-2015 droughts were often blamed on poor ocean conditions, as well as poor river conditions.  Concerns of potential straying are unfounded, as all the Bay releases of Feather and American hatcheries have low straying rates (see Figure 1 for example).  Do we want a better return on our Central Valley salmon hatchery investments?