Despite the fact that it is a record wet year with abundant spring snowmelt, early summer conditions in the Delta in 2017 are not looking good.  Rapidly falling Delta inflows and a late June heat wave have led to salt water intrusion and extremely warm water temperatures detrimental to salmon and smelt throughout the Delta.

Notably, lower Sacramento River flows at Wilkins Slough upstream of the mouth of the Feather River are down about a third compared to the last Wet year, 2011 (Figure 1).  Flow is only about 7000 cfs and water temperatures are 73-75°F, well above the water quality standard of 68°F.  Winter-run and spring-run adult salmon will not move up the river at these temperatures.  Why is flow so low?  Good question.  Shasta is nearly full but releases are down about a third for a wet year at 8000 cfs.  In contrast, the San Joaquin River flow coming into the Delta near Stockton is 13,000-15,000 cfs, with water temperatures of 71-73°F.

Overall Delta outflow in late spring 2017 is lower than Wet year 2011 (Figure 3).  Delta inflow is approximately 34,000 cfs, with about equal contribution from the Sacramento and San Joaquin rivers. Delta exports have been maximum through June at 11,400 cfs.  With in-Delta use taken into account, Delta outflow is estimated at 19,000-21,000 cfs. (Note: USGS measured outflow about 14,000 cfs with tides taken into account on June 22.)

With sharply falling Delta inflow and outflow, high exports, and the heat wave, the Delta is unusually warm at 72-75°F. Such temperatures are detrimental to juvenile smelt, salmon, and sturgeon survival.  Juvenile salmon have been present in the Delta well into June on their seaward migrations (Figure 4).

With falling Delta inflow and high exports, the Delta is stagnating and salt water is intruding at the west end at Chipps Island (Figure 5).  The Low Salinity Zone with the few Longfin and Delta smelt that are left is moving into the Delta on incoming tides.  The water temperature at the head of the LSZ is already 72°F (Figure 6).  Higher temperatures would be very detrimental to surviving smelt and seaward-moving juvenile salmon.  The further east the LSZ moves, the warmer it usually becomes.

There is a consistent late spring pattern in the operation of State Water Project and Central Valley Water Project in which they cut reservoir releases while exporting the remnant freshwater pool in the Delta.  Even in this very wet year we are again witnessing this water supply control strategy.  The problem is the rivers get too warm even to the point of violating water quality standards.  With less water and warmer water entering the Delta, the Delta also becomes too warm.  Delta water quality standards and endangered species permits are supposed to keep this from happening.  Come July 1, conditions will only get worse, especially as snowmelt declines and San Joaquin flows drop sharply.

What can be done?  Both Shasta and Oroville reservoir releases are lower than normal.  Just keeping their cold-water releases near normal and allowing the flows to pass through the Delta would nearly fix the problem.  Exports in the 1970’s and 1980’s were limited to 6000-9000 cfs in June-July of Wet years.  Reducing the present export level of 11,000 cfs would also help.  These would be very reasonable actions given present water supplies in the Central Valley. Figure 1. Flow in the lower Sacramento River at Wilkins Slough in late spring of 2011 and 2017. Figure 2. Lower Feather River flow at Gridley upstream of the mouth of the Yuba River. 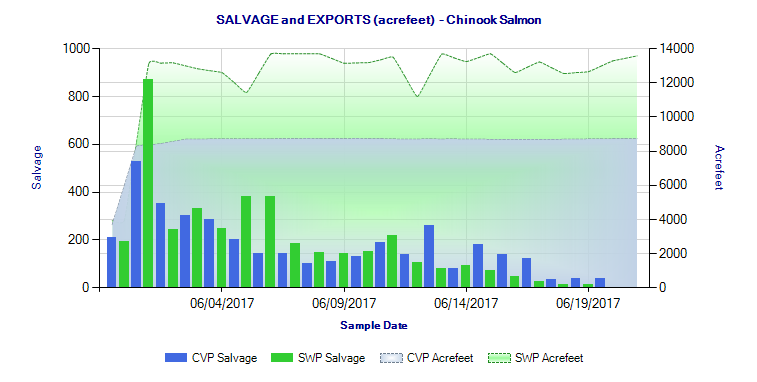 In a June 2 post I wrote about protecting Sacramento River salmon and sturgeon in spring 2017. The topic shifts to summer in this post. Summer (July-September) river conditions are also important for sustaining salmon and sturgeon. There are numerous sensitive summer life-history stages with well recognized tolerance limits:

In this post, I focus on the summer spawning run of fall-run salmon of the Sacramento River. Fall-run make up the vast majority of Sacramento River salmon, as well as the Central Valley salmon population. Better summer conditions in 2017, especially with a record-high water supply, should help produce more salmon and bring about a recovery of the depressed ocean and river fisheries.

Adult fall-run migrate from the ocean through the Bay-Delta and begin spawning in the upper river (river mile 200-300) in September continuing through December. Summer river conditions during their upriver spawning run, pre-spawn holding, and spawning are important factors in the ultimate success of the spawning run (i.e., smolt production and future runs).1

To protect the spawning run we should focus on two key objectives:

The fall-run spawning reach is from Hamilton City upstream to Keswick Dam: river mile 200 to 300 (Figure 1). Spawning winter-run are protected with a 56oF daily-average limit above Balls Ferry (RM 276). With potentially over half the fall-run spawning below Balls Ferry, a 60oF limit is needed down to Hamilton City (RM 200). Historical water temperatures at Red Bluff (RM 243) show that the Basin Plan 56oF target at Red Bluff was rarely achieved, but that the 60oF limit was achieved except in some critically dry years (Figure 2). Allowing for a 2-degree leeway to maintain the 60oF limit downstream 40 miles to Hamilton City, a 58oF limit was not achieved except in some wetter years. Maintaining a 60oF limit at Hamilton City would take flows of 10,000 cfs or more at Red Bluff (Figure 3).

The fall-run migration reach to the spawning grounds above Hamilton City (RM 200) is approximately 100 miles above the mouth of the Feather River at Verona. Historical water temperature data from the Wilkins Slough gage (RM 125) show that the 68oF daily average objective was often not met, especially in critically dry years (Figure 4). Maintaining a 68oF limit near Wilkins Slough in the lower Sacramento River would take flows of 7,000 cfs or more at the Wilkins Slough gage (Figure 5). Maintaining a 68oF limit at Verona below the mouth of the Feather River would take up to 15,000 cfs at the Verona gage (Figure 6).

These recommendations are consistent with Basin Plan objectives for Sacramento River water temperature. 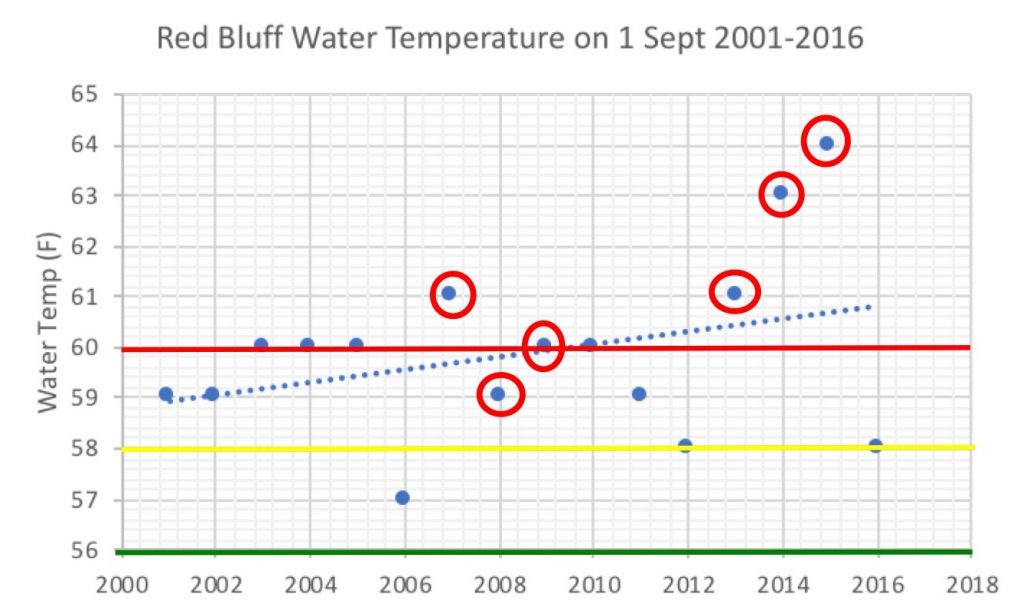 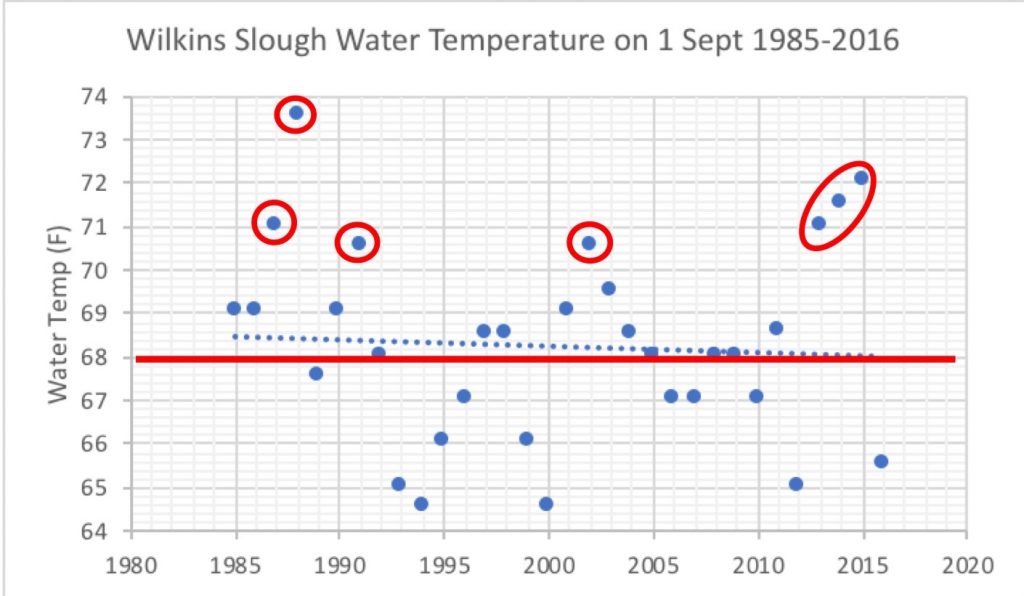 Despite a record water supply in 2017, water operations in the Sacramento Valley are already threatening salmon and sturgeon because water managers are not meeting flow and water temperature targets and regulators are not enforcing them.

The water temperature of the Sacramento River at Red Bluff (river mile 240) exceeds the target of 56oF in the Salmon Biological Opinion, water right permits, and Basin Plan (Figure 1a).  The water temperature at Red Bluff (Figure 1a) is also approaching the 60oF tolerance limit for salmon and sturgeon eggs and embryos.  The water temperature in the lower Sacramento River at Wilkins Slough (river mile 125) exceeds the 65oF tolerance limit for sturgeon larvae and approaches the 68oF Basin Plan tolerance limit for migrating juvenile and adult salmon and sturgeon (Figure 1b).  To protect migrating salmon and sturgeon, water managers need to maintain a flow in the lower Sacramento River of at least 10,000 cfs through the summer of this very wet year (Figure 2).