The first indicators of winter-run salmon spawning survival in the Sacramento River in 2021 indicate poor production, as expected.1 The drought and Reclamation’s operations in 2021 have provided production levels on par with 2014 and 2015, the last two critical drought years.

Red Bluff screw-trap collections since August 1, 2021 have been very low (Figure 1). The spawning delay in 2021 due to high spring water temperatures and low flows may be delaying downstream movement. However, outmigration patterns are similar to 2014 and 2015 (Figures 2 and 3). Even 2020, a dry year with poor production, had numbers five times higher than 2021 to date (Figure 4). Historical wet years with good production like 2006 had collection numbers ten times higher (Figure 5). There is a slim chance that the spawning delays and low flows of 2021 will provide screw-trap collection patterns similar to 2018, a dry year with a later collection peak (Figure 6).

Regardless of the low fry production, the young winter-run salmon must still make it 300 miles to the ocean this fall and winter, a phenomenal hurdle under the best of circumstances. Low fall flows will make the journey difficult. The class of 2021 will get no help from storage releases. Like almost every other user of California water in the beginning of water year 2022, outmigrating winter-run salmon are wholly dependent on future rain to provide the water they need. 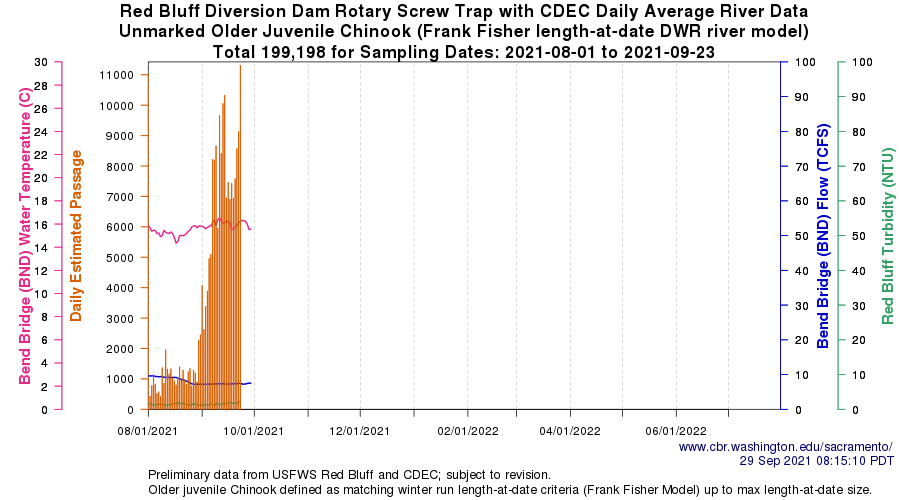 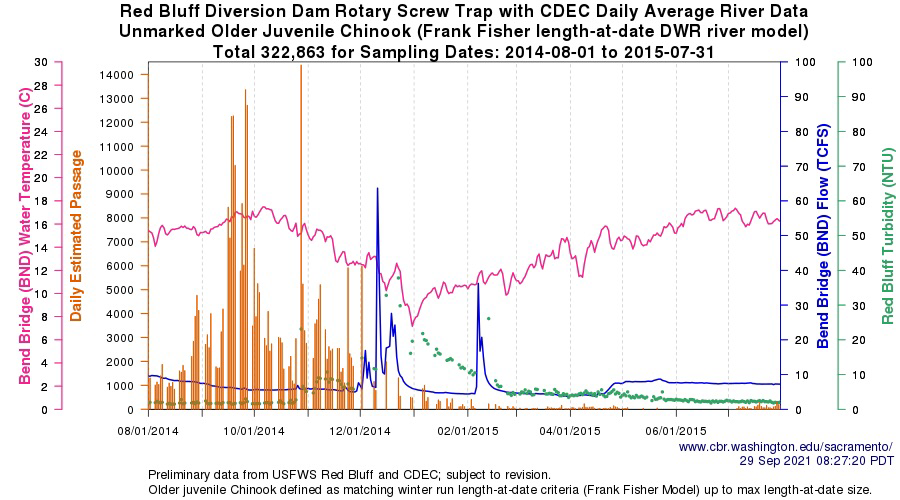 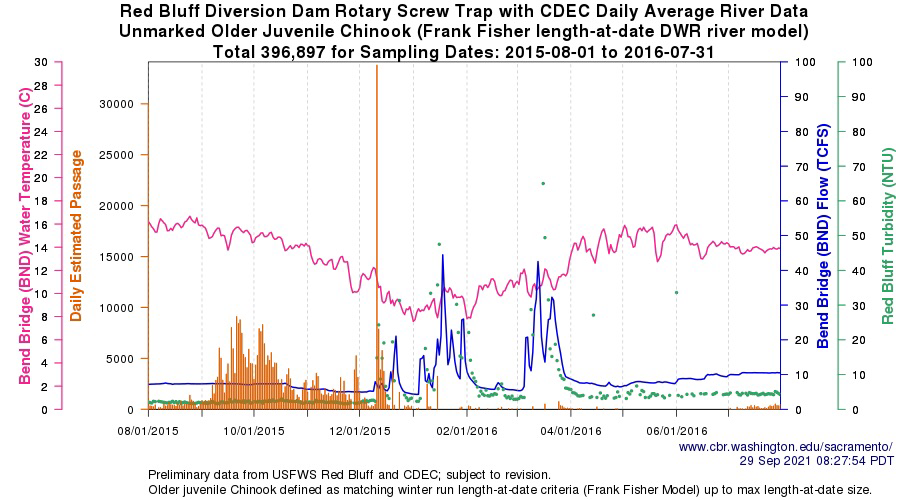 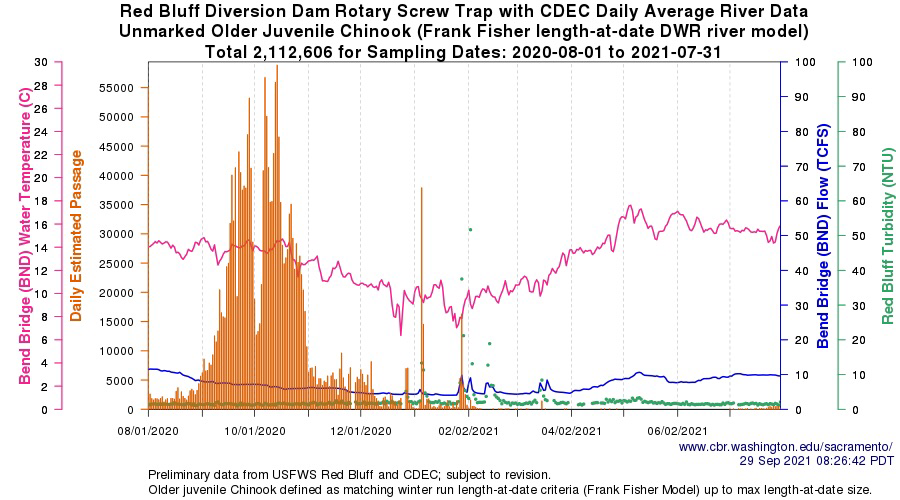 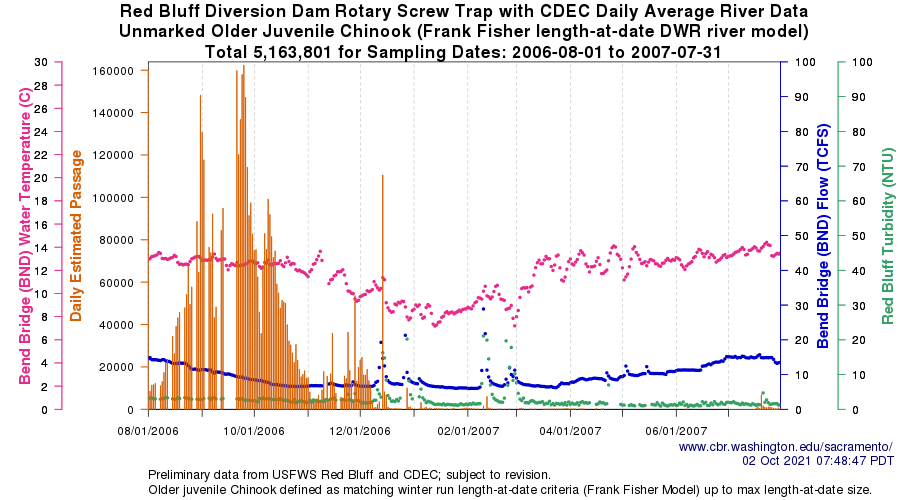 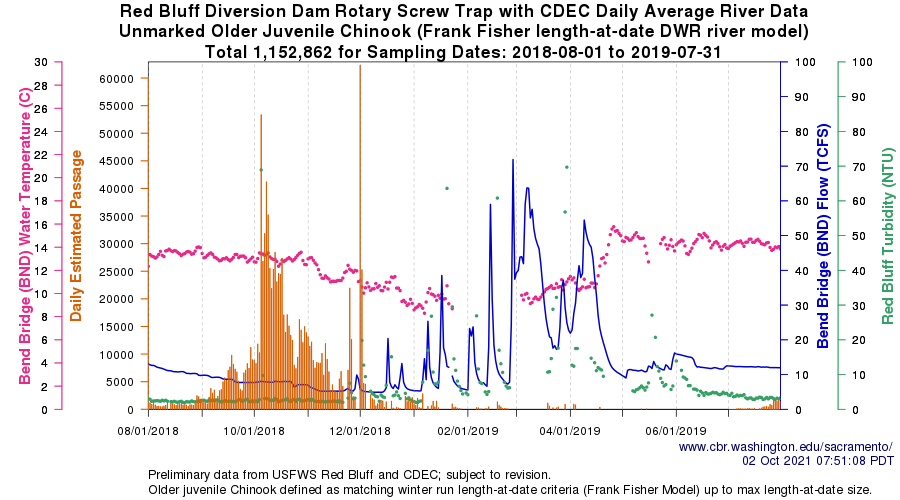 The 2021 target upper water temperature limit for salmon spawning and gravel-bed egg incubation below Shasta/Keswick dams on the Sacramento River near Redding was 55oF.  It is a little late for that now.  Since September 1, Keswick releases have been greater than 56.5ºF, and are now approaching 58ºF.  That’s too warm for the winter-run salmon who have finished spawning (Figures 1 and 2).

But what about the far larger run of fall-run salmon during their peak October spawning?  Can water temperatures downstream of Keswick be lowered back to 55oF in October?  The answer is a qualified yes. 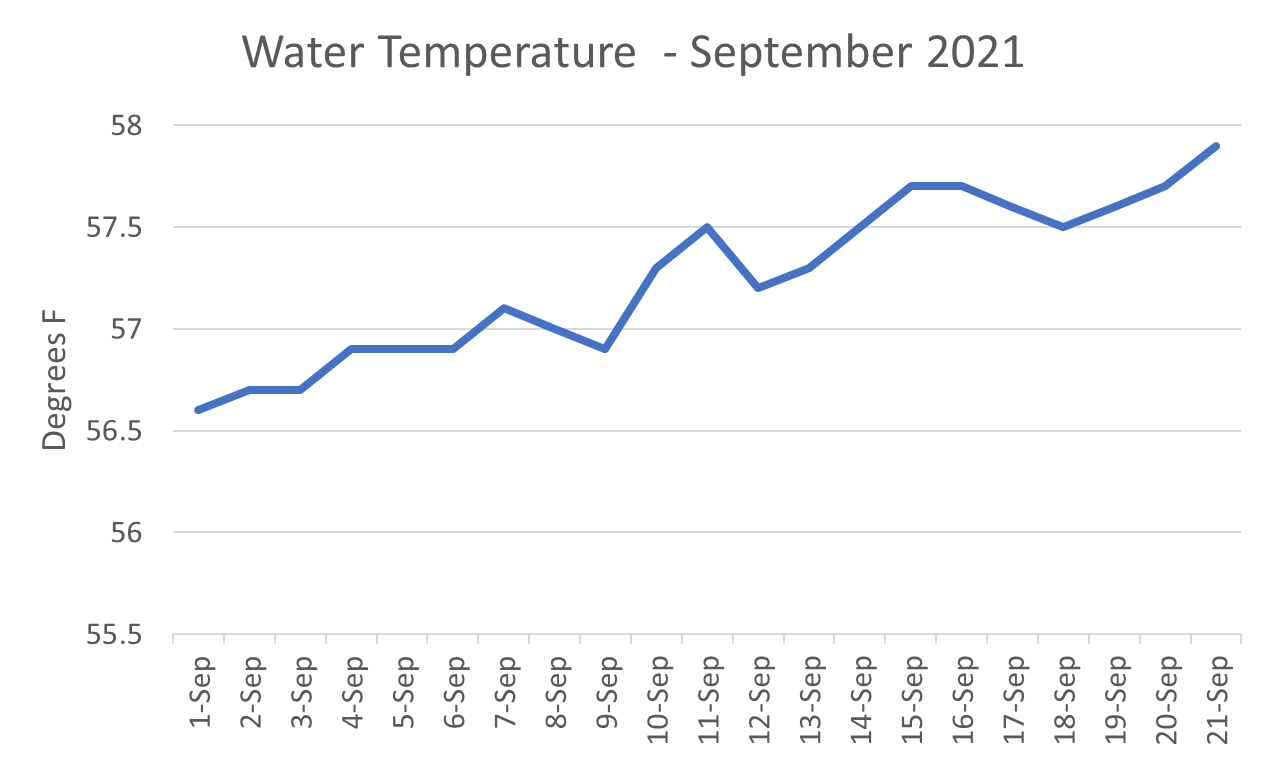 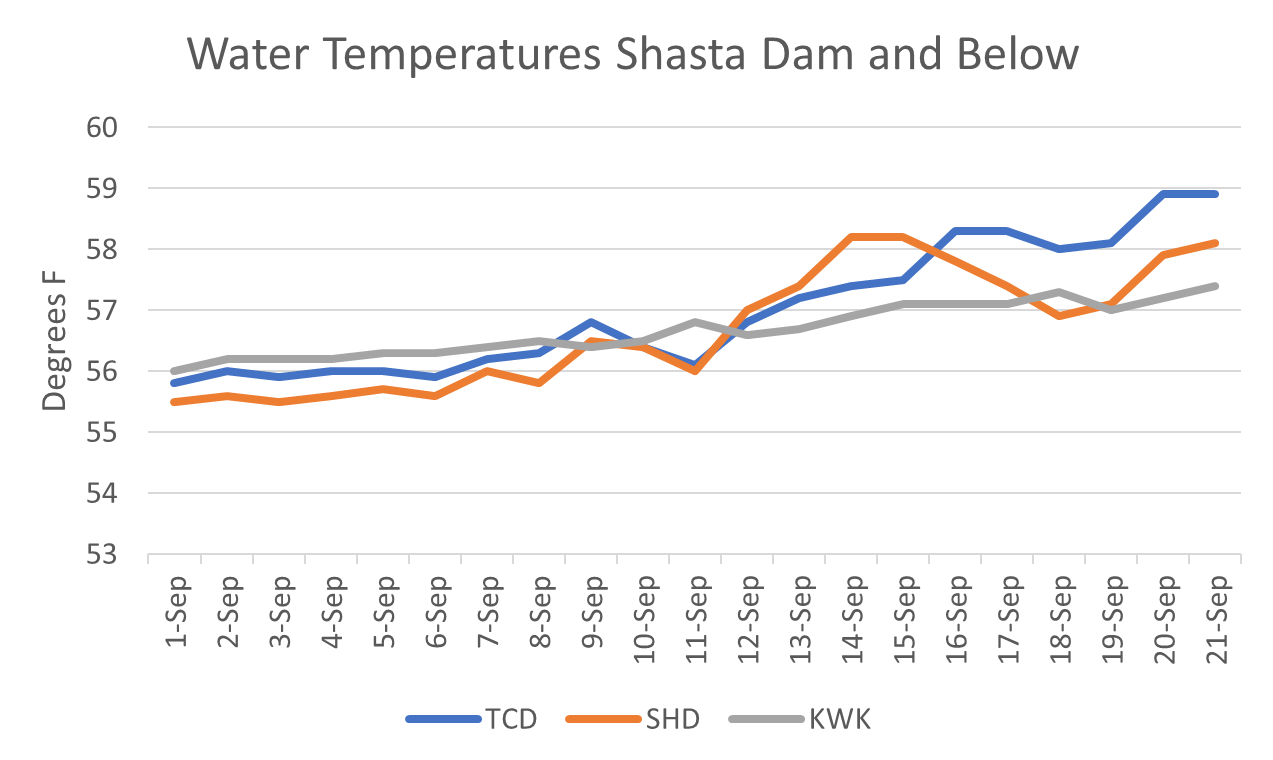 A “qualified yes” means it would be a complex undertaking involving two actions possible under Reclamation’s operation of its Shasta/Trinity Division:

Much of the remaining cold-water pool in Shasta Reservoir is being used to overcome warm-water hydropower releases into Keswick Reservoir (~60oF or higher) before water is released to the Sacramento River below Keswick Dam.  Cutting hydropower releases and rationing the available cold-water-pool supply through Shasta Dam’s lower river outlets is therefore a potential solution to warm water releases to the river.  Though this would reduce hydropower in the short-term, it would save storage in the long-term.

The solution would require a substantial reduction in Shasta Reservoir releases to ensure the cold-water-pool is not exhausted over the next month or more.  However, reducing releases would lower river water levels and strand salmon redds or reduce egg-embryo survival of remaining active winter-run redds or any newly spawned spring-run and fall-run redds.

A possible resolution is to drop flows after the vast majority of winter-run fry have left their redds and before most of the fall-run salmon have spawned.  This has been the standard management approach in many years to save storage – sometime in late September or in October.

Under present conditions in late September 2021, access to the cold-water pool in Shasta Reservoir occurs primarily during the afternoon/evening, during peaking-power releases (Figures 3-5) from the penstocks via the Temperature Control Device (TCD) on the face of the dam.  Side-gate openings on the TCD (Figure 6) are able to pull cold water from below only during peak releases.  This pattern indicates that a modified solution might be to reduce warm-water power releases during non-peak operations, while retaining some peaking power releases from Shasta Dam in combination with lower level dam outlet releases. 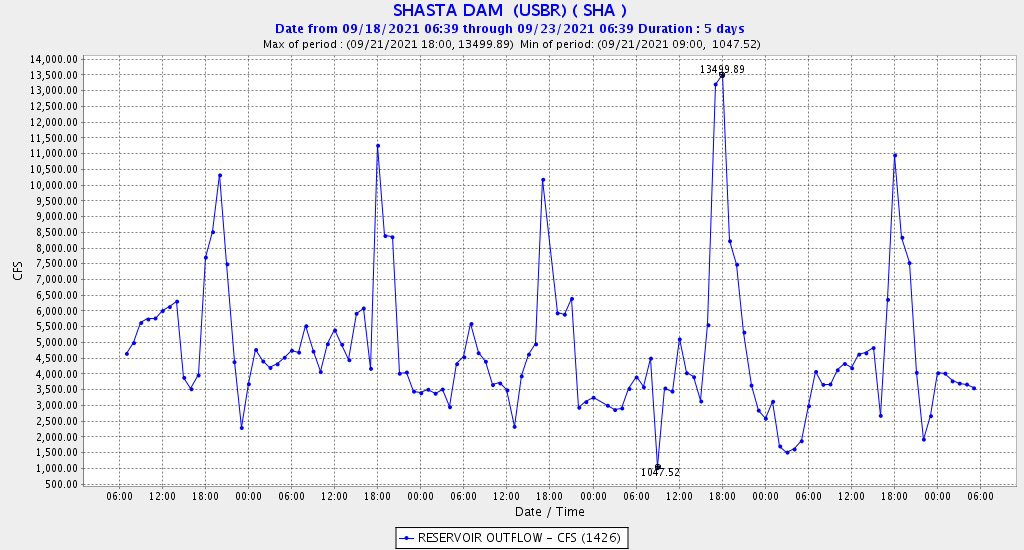 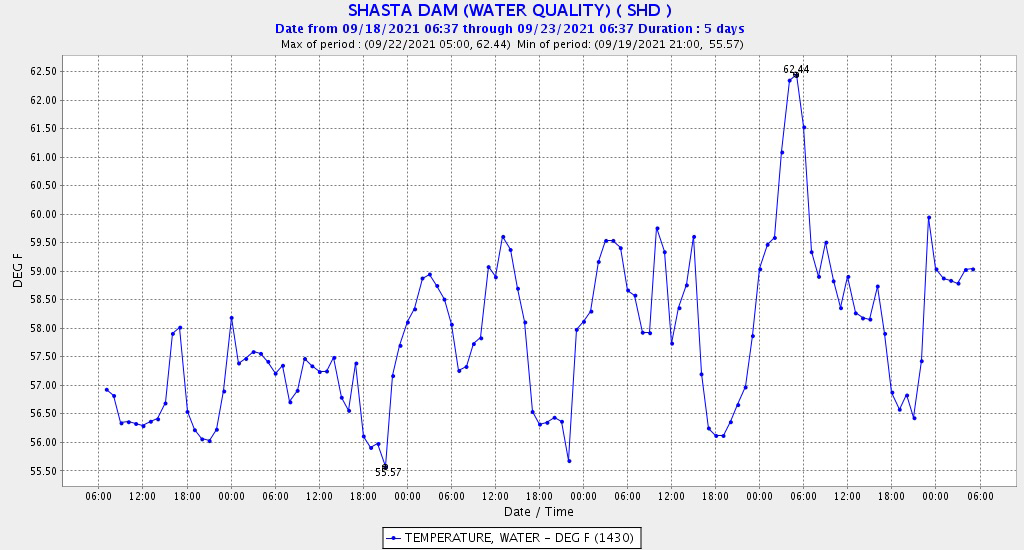 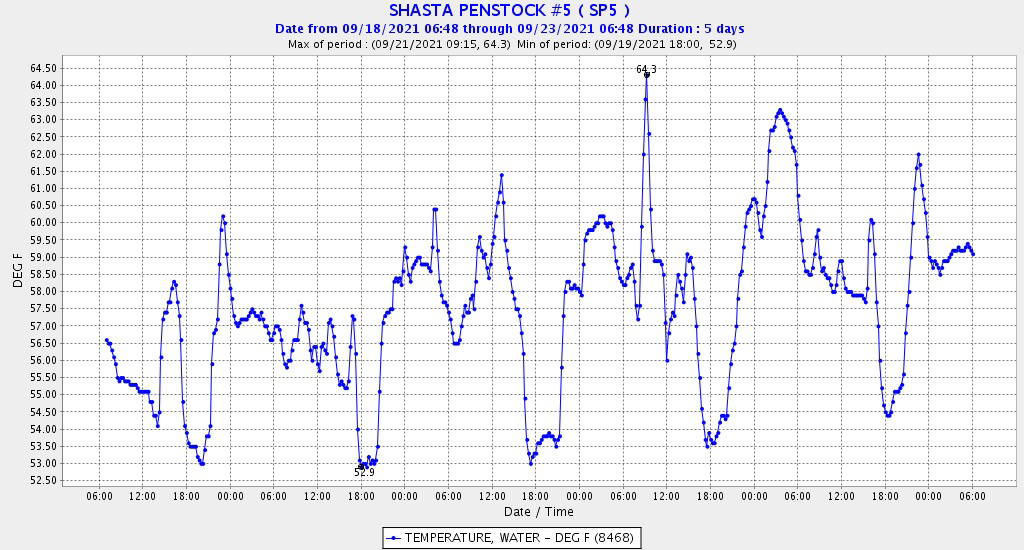 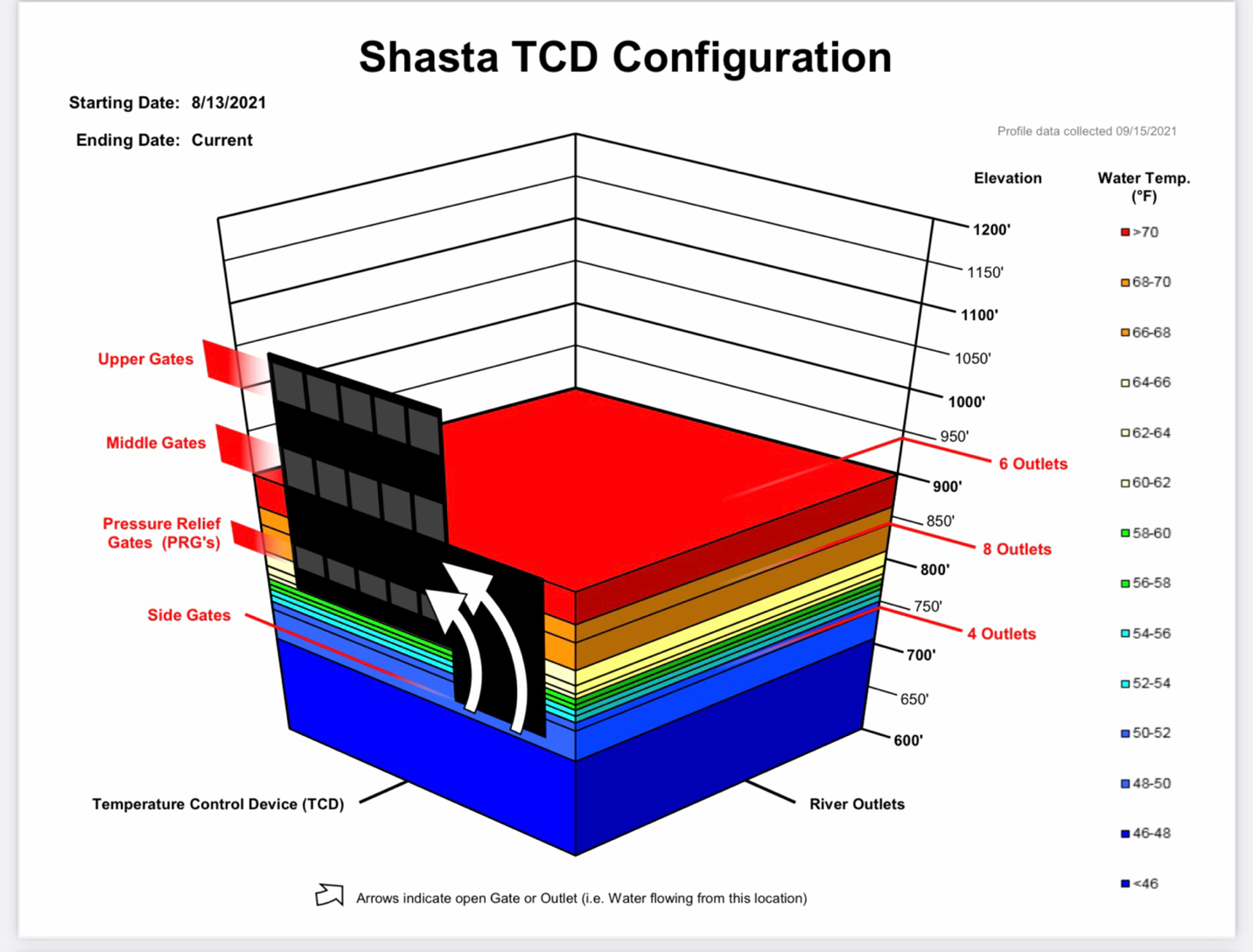 Earlier this summer, the Bureau of Reclamation’s operations of Shasta Reservoir, under its Drought Plan jointly developed with the California Department of Water Resources (DWR), caused high water temperatures that delayed spawning of winter-run Chinook salmon to early summer (mid-June through mid-July).1 Winter-run salmon leave the redds after 2-3 months, which in 2021 will mean a mid-August through September peak emergence.

In their Addendum to the State Water Project and Central Valley Project Drought Contingency Plan issued August 31, 2021, Reclamation and DWR state how an increase in September releases responded to a request from fisheries agencies:

In the July Drought Plan update, Reclamation’s forecast for releases to the Sacramento River were 7,850 cfs in August, ramping down to a monthly average of 5,200 cfs in September, and then going back up to 7,550 cfs in October to move the transfer water referenced above. In late August, the fishery agencies reviewed updated data indicating that a flow of approximately 6,800 cfs was needed through early-October to protect several remaining winter-run Chinook salmon redds. As a result, Reclamation modified its previous plan and held releases at 6,800 starting August 26.

Not so fast. In 2021, as in 2014, Reclamation cast the die early in the year, releasing too much water that was too warm until late June (Figures 1 and 2). That was Reclamation’s call, not the choice of the fish agencies. The agencies know that in drought year 2014, Reclamation also maintained both high flow releases and high water temperatures early in the summer, and that therefore the winter-run salmon spawned late. The agencies also know that a drop the water level 2-3 feet at the beginning of September 2014 (Figures 1 and 2) proved catastrophic to eggs and alevin still in the redds. Such drops in water level, with most redds in 1-3 ft of water, cause dewatering, reduced inter-redd water flow, sedimentation within the redd, lower dissolved oxygen, higher redd water temperatures, early hatching, direct egg/embryo mortality, and restricted fry movement within and emergence from redds.

The planned drop in early September of 2-3 feet in water level, part of the original 2021 Drought Plan, was a bad part of bad plan from the get-go. In 2015, Reclamation at least tried to avoid the drop by keeping releases lower throughout the summer (Figures 1 and 2). The August Addendum insinuates that added loss of storage in September-October to maintain higher flow/stage was the result of fishery agency review, when the agencies never wanted nor originally approved the September drop in river flow. The steady flow/stages in 2015 (Figures 1 and 2) was the appropriate prescription.

Just as it was a happy circumstance for the Sacramento River Settlement Contractors that Reclamation delivered them too much water north of the Delta early in the year, it was a happy circumstance for Reclamation and the Settlement Contractors that their planned water transfers of about 200 thousand acre-feet (TAF) to buyers south of the Delta just happened to be ready to go just as the drop planned earlier in the summer was scheduled to happen. Transfer water in a market where prices are north of $1000/AF is the mother’s milk of the change in September Shasta operations (Figure 3).

The accelerated schedule of transfers from Shasta storage also reduces the opportunity for the State Water Board or its Executive Director to wake up and smell the receding predictions for the reservoir’s receding shoreline. The tables at the end of the August Addendum now predict end-of-November storage in Shasta to be an unprecedented 729 TAF, down from the July Addendum’s prediction of 849 TAF. The only numbers that have maintained relative consistency throughout the summer 2021 Sacramento River debacle are the levels of deliveries and transfers. That consistency has been matched and enabled by the silence of the Water Board.

In summary, the original 2021 Drought Plan did not address the real risk of redd stranding that proved devastating for the winter-run salmon spawn in summer 2014. The July-August 2021 stage drop was bad enough and should have been avoided, given that high water temperatures delayed the spawn of winter-run to late June. The fish agencies were cornered into choosing between a large September 1 stage drop in a bad original plan and the buy-now-but-pay-later option of maintaining higher flows through September. The additional drain on Shasta storage and Reclamation’s increasing inability to maintain cold water releases through October show the folly and poor design of the original Drought Plan.

This post is part 3 in a series on DWR and Reclamation’s August Addendum to the 2021 Drought Plan. 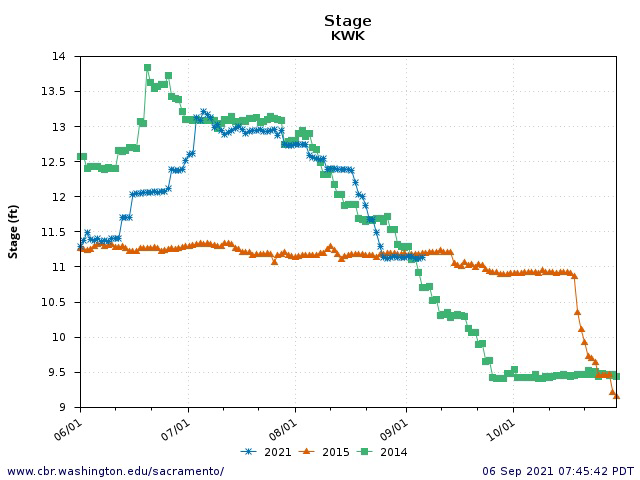 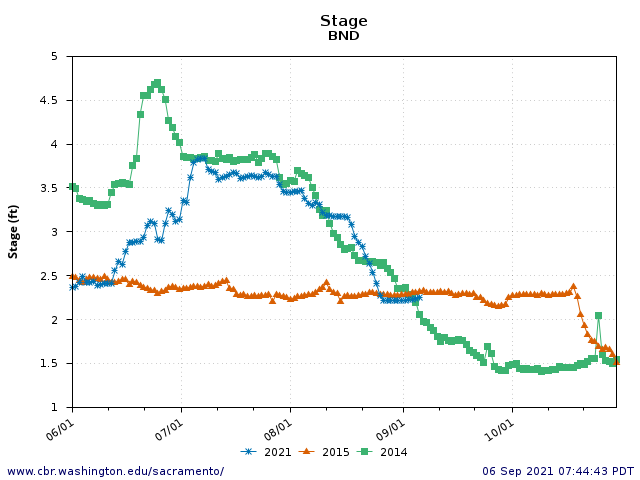 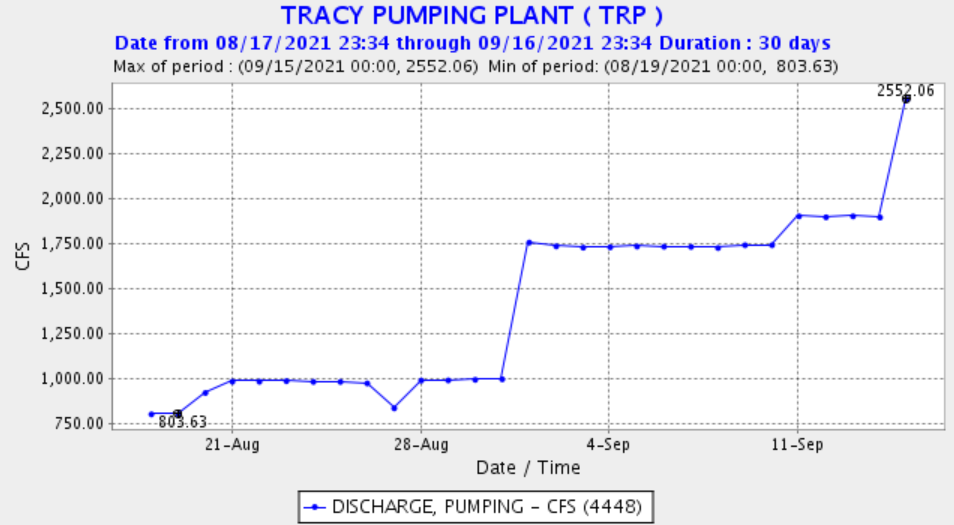 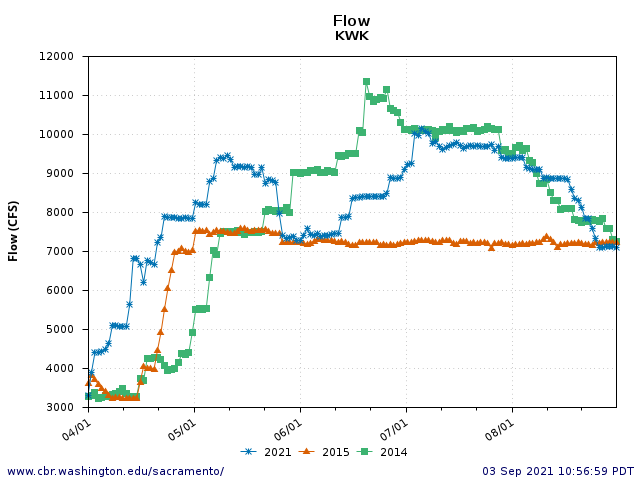 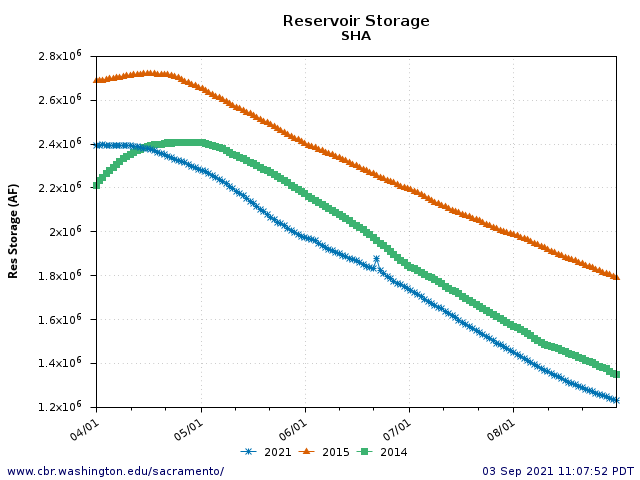 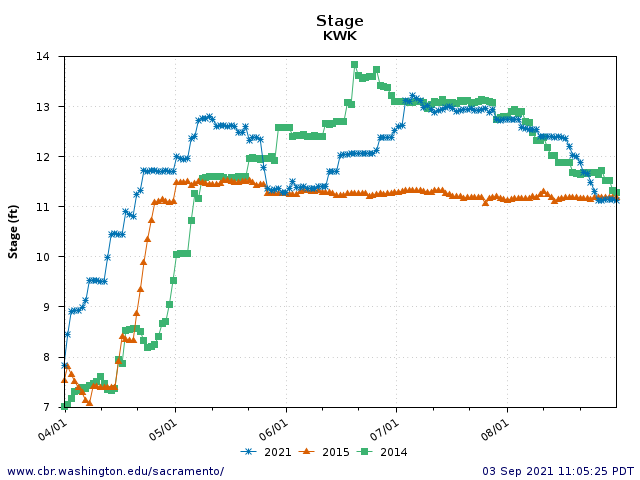 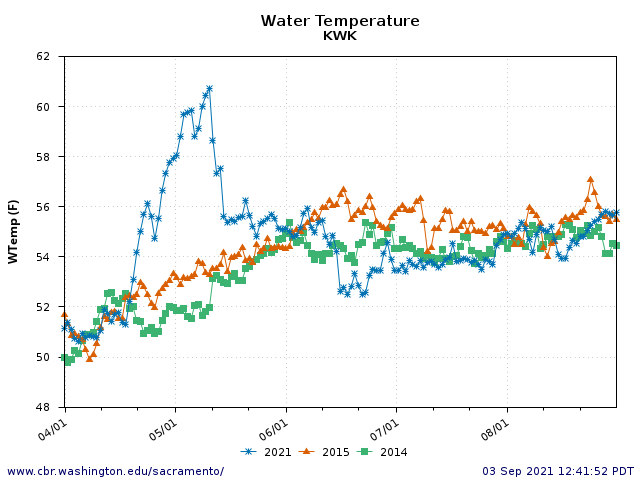 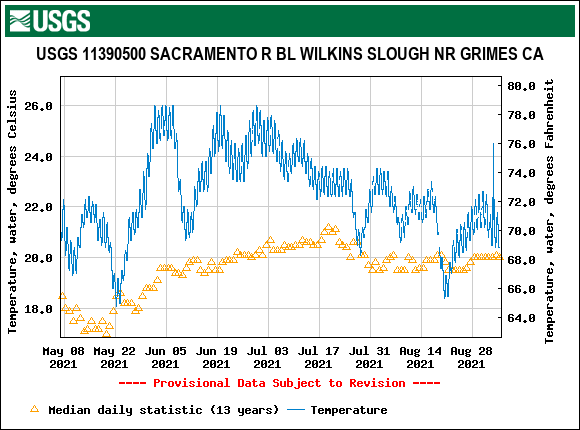 Water years 2016 and 2020 were below-normal water years in the Central Valley. Water year 2016 followed three critically dry, drought years, whereas 2020 followed two wet years (2017 and 2019) and one normal (2018) year. So one might assume that 2020 would have been better for Sacramento River salmon than 2016. But it ain’t so – because two different federal administrations were managing Shasta operations. The Trump administration’s policy to “maximize deliveries” of water that began in 2020 had consequences that turned deadly for salmon in critically dry 2021.

First and foremost, Shasta Reservoir storage in 2016 was surprisingly about 500,000 acre-feet or more higher than it was in 2020 after the first of April (Figure 1). Although water year 2020 started out nearly 2 million acre-feet (MAF) higher after a wet year, Shasta storage rose sharply in 2016, nearly filling (4.6 MAF capacity) with winter rain. But the real question is why reservoir storage did not recover in spring 2020. The reason is simply that in 2020, high spring and early summer reservoir releases for water deliveries released water from Shasta almost as fast as it was coming in (Figure 2). If in mid-March, when the reservoir storage was at 3.5 MAF in both years, similar storage-release constraints were in place in 2020 as in 2016, then 2020 would have ended the summer about 500,000 acre-feet higher than it did, near the 2016 storage level (Figure 3).

As a consequence of the storage difference and summer reservoir management, water temperatures downstream of Shasta Reservoir were significantly higher in 2020 than they were in 2016 (Figures 4 and 5). One reason for this was a much reduced volume of the Shasta Reservoir cold-water pool in 2020 compared to 2016 (Figure 6).

In conclusion, the Bureau of Reclamation managed water for winter-run salmon in normal water year 2016 much better than it did in normal water year 2020. Knowing the reservoir would likely not fill in 2020, Reclamation should have deployed a more conservative spring and summer release pattern, similar to what it did in 2016, to sustain cold-water releases from the reservoir through the summer and fall. 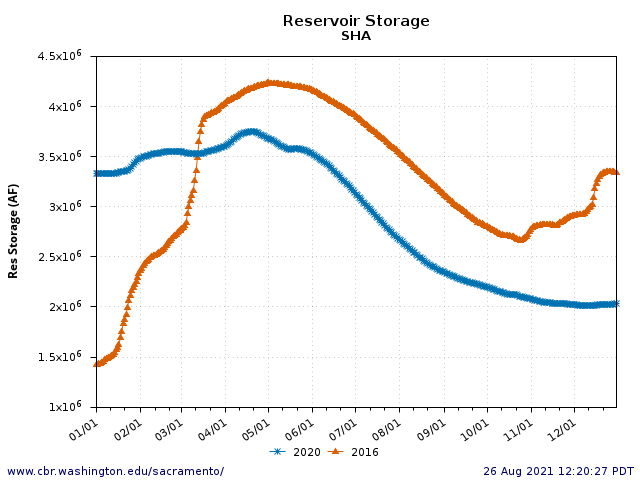 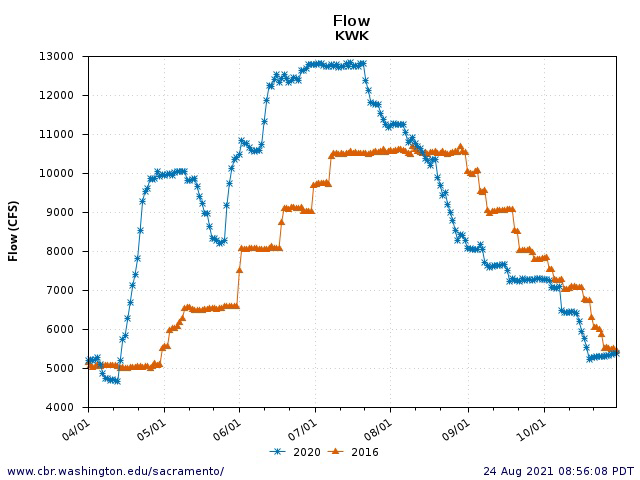 Figure 2. Keswick Reservoir to the lower Sacramento River from April-October in 2016 and 2020. 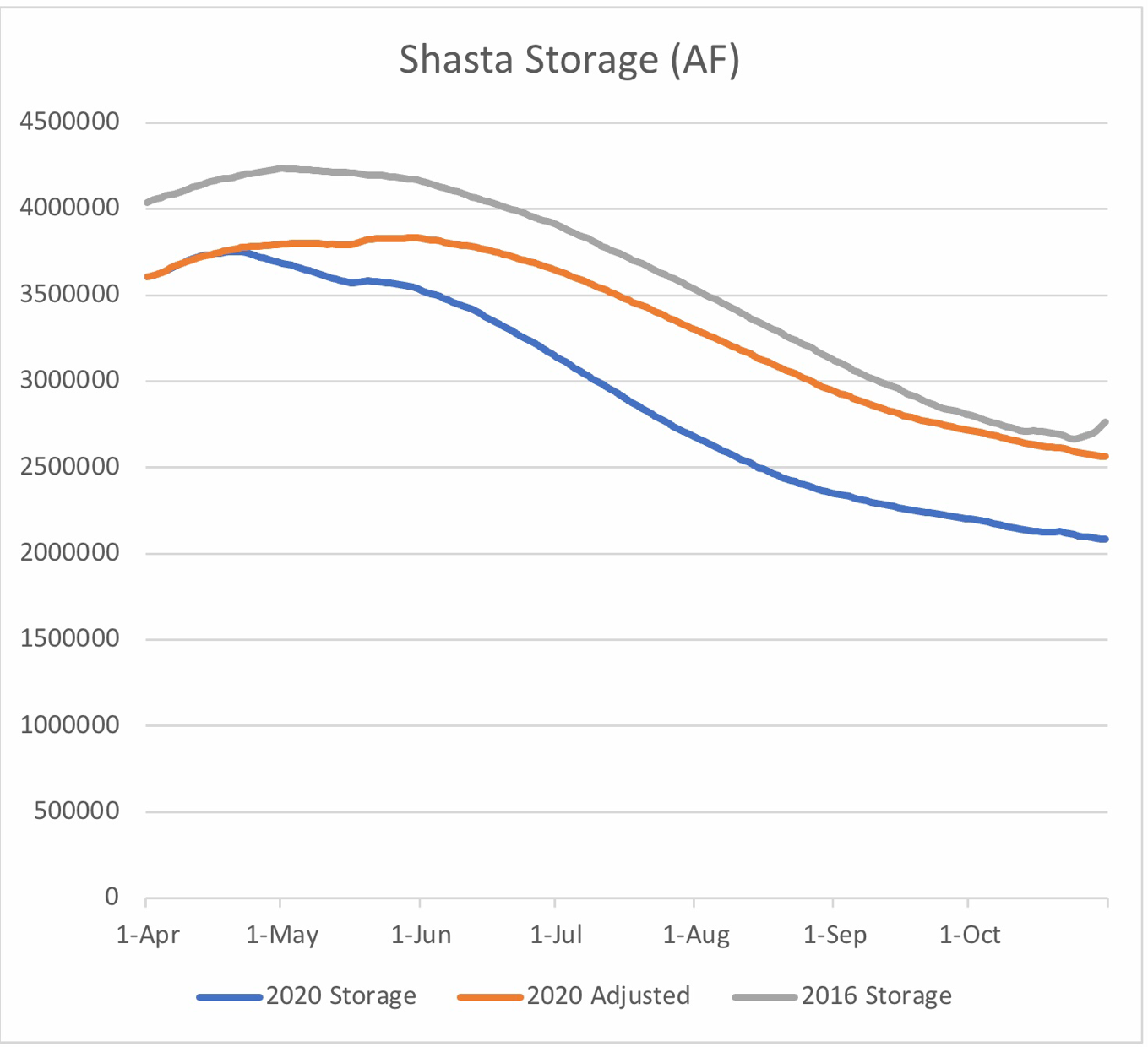 Figure 3. Shasta Reservoir storage in 2016 and 2020 along with author-calculated adjusted release for 2020 if flow release pattern in 2016 (Figure 2) had been employed. 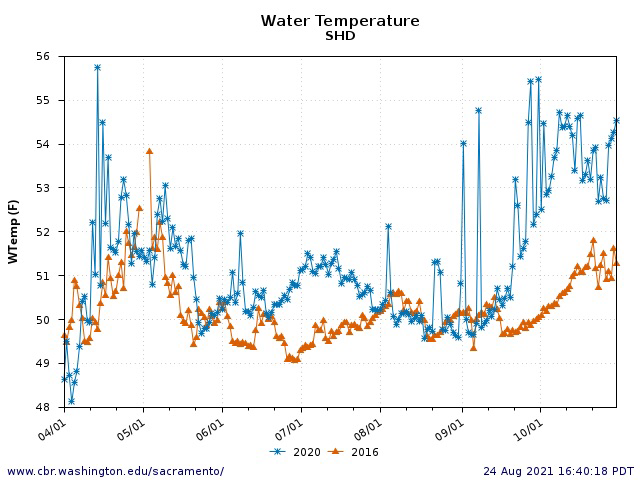 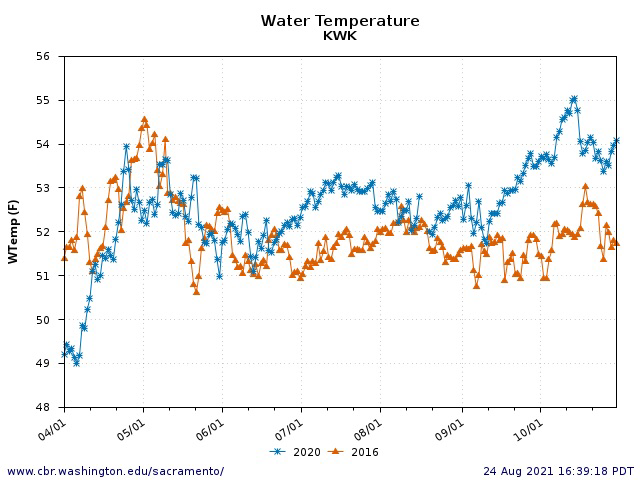 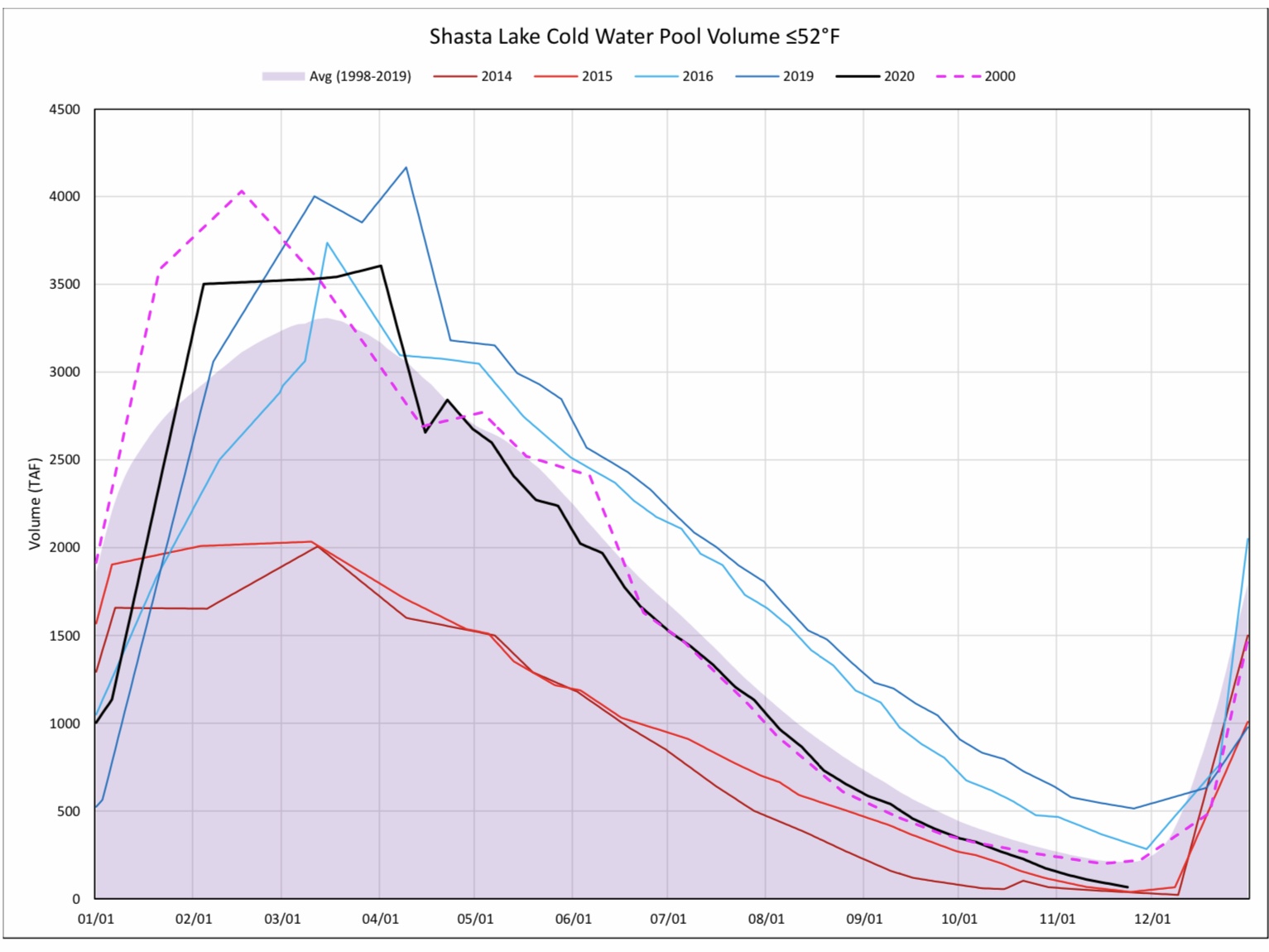