In a February 2020 post on the status of longfin smelt, I lamented the poor 2019 population index (Figure 1) and thus made a grim prediction for the future of the Bay-Delta sub-population of this state-listed endangered species.  The index in wet year 2019 should have been 10 times higher (one higher in log number).  Preliminary survey results suggest that the 2020 population index for longfin smelt will likely be as poor as those in 2018 and 2019.

I am very concerned what will happen if winter 2021 stays dry and there are thus two dry water years in a row (2020 and 2021).  This would drive the 2021 production index down to 2015-16 levels.  Coupled with the absence of Fall-X2 flows in 2020 and the unusually low 2019 longfin index, a second straight dry year presents a serious threat to the population index in 2021 and future years. 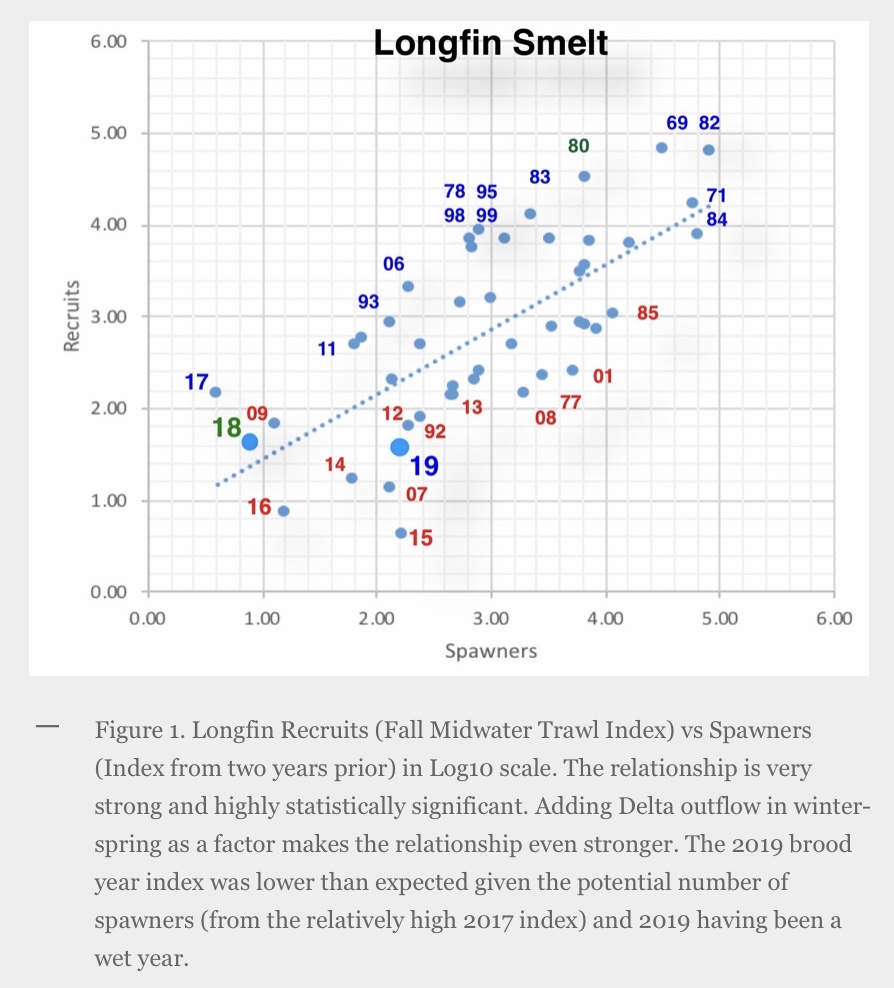 The north Delta habitats where a few Delta smelt persevere continue to be plagued by constant stressful if not lethal water temperatures (Figures 3 and 4).

As I stated in a prior post, Delta smelt would benefit from increased net flows through the north Delta during the spring and summer. 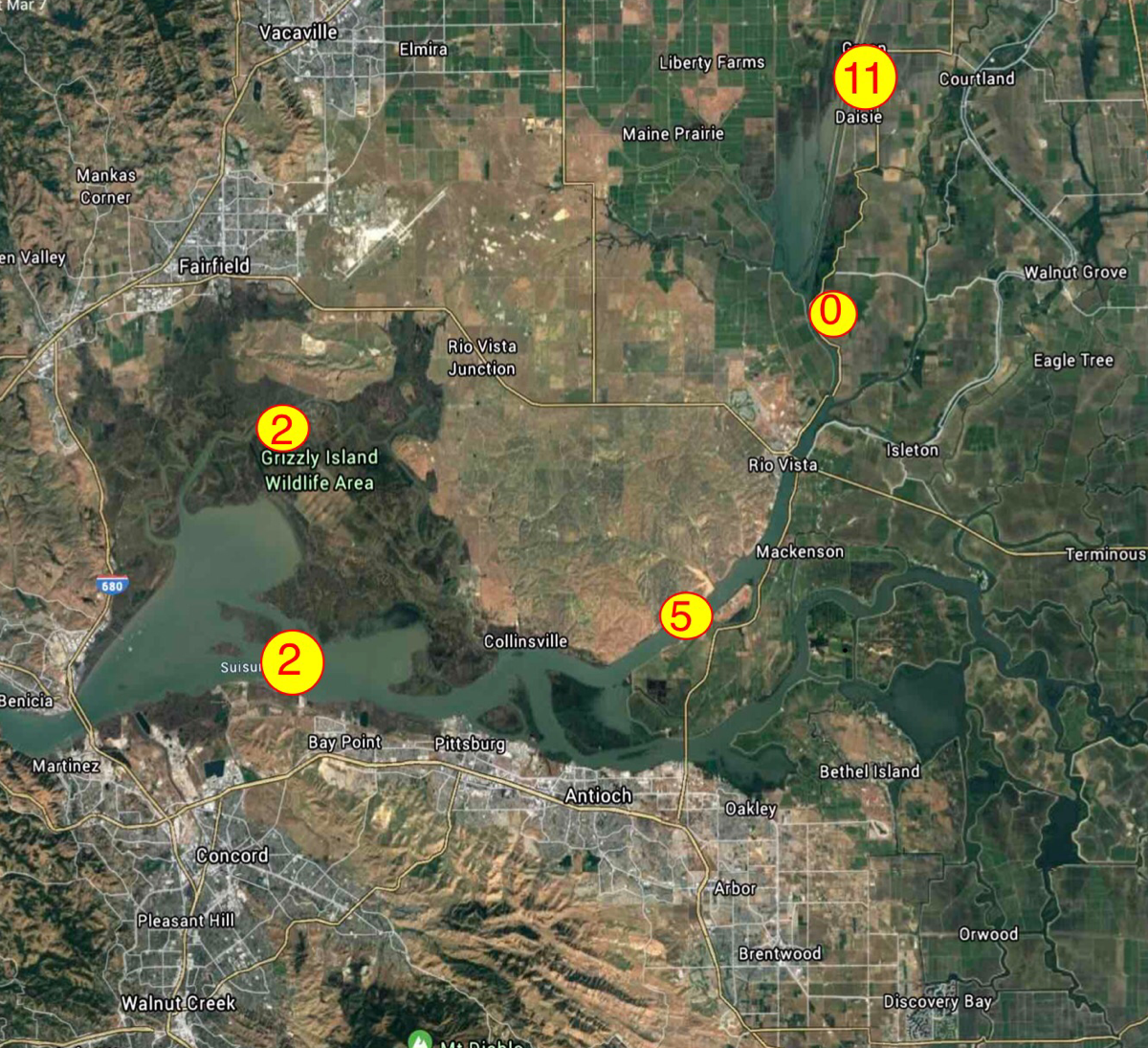 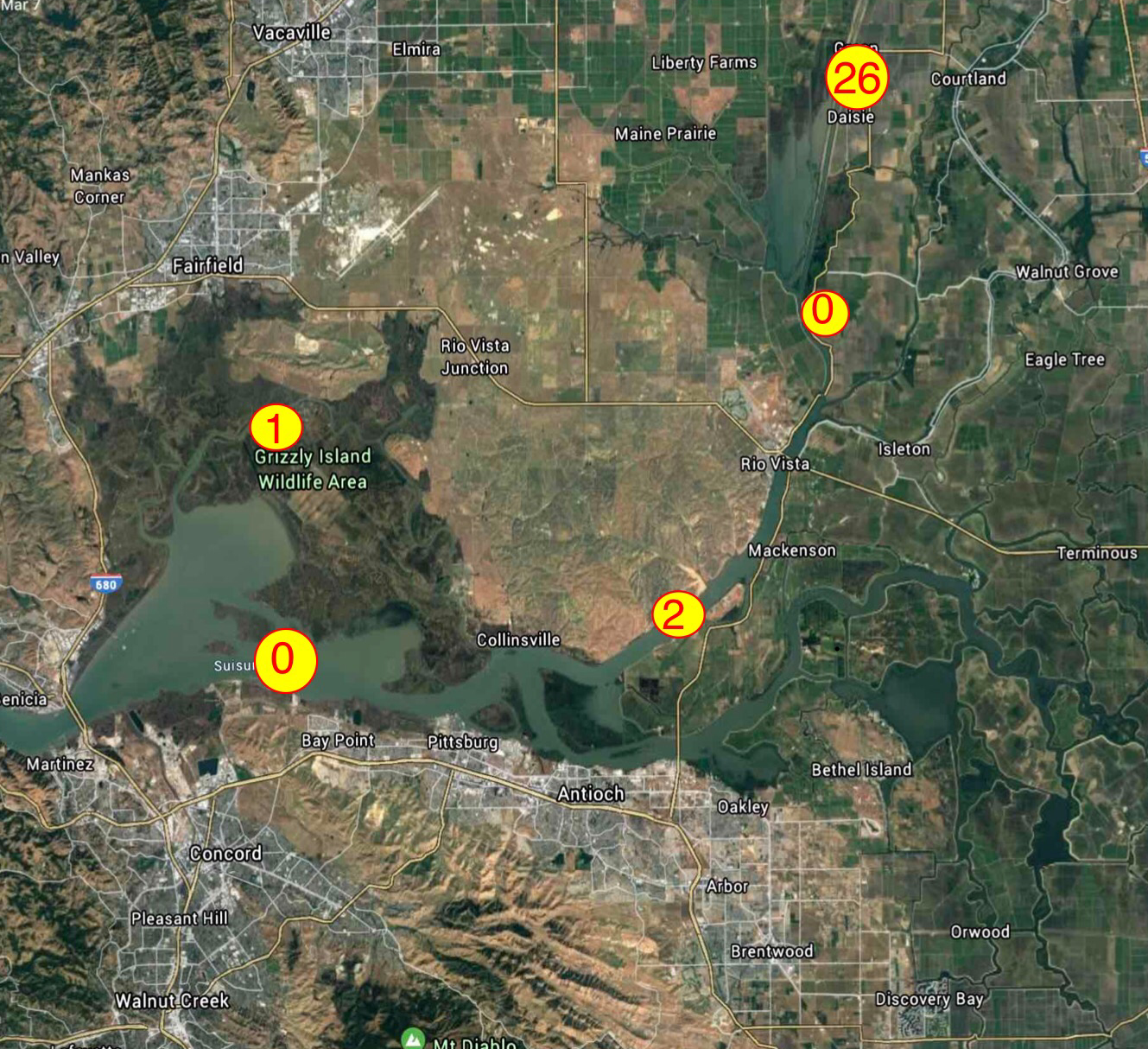 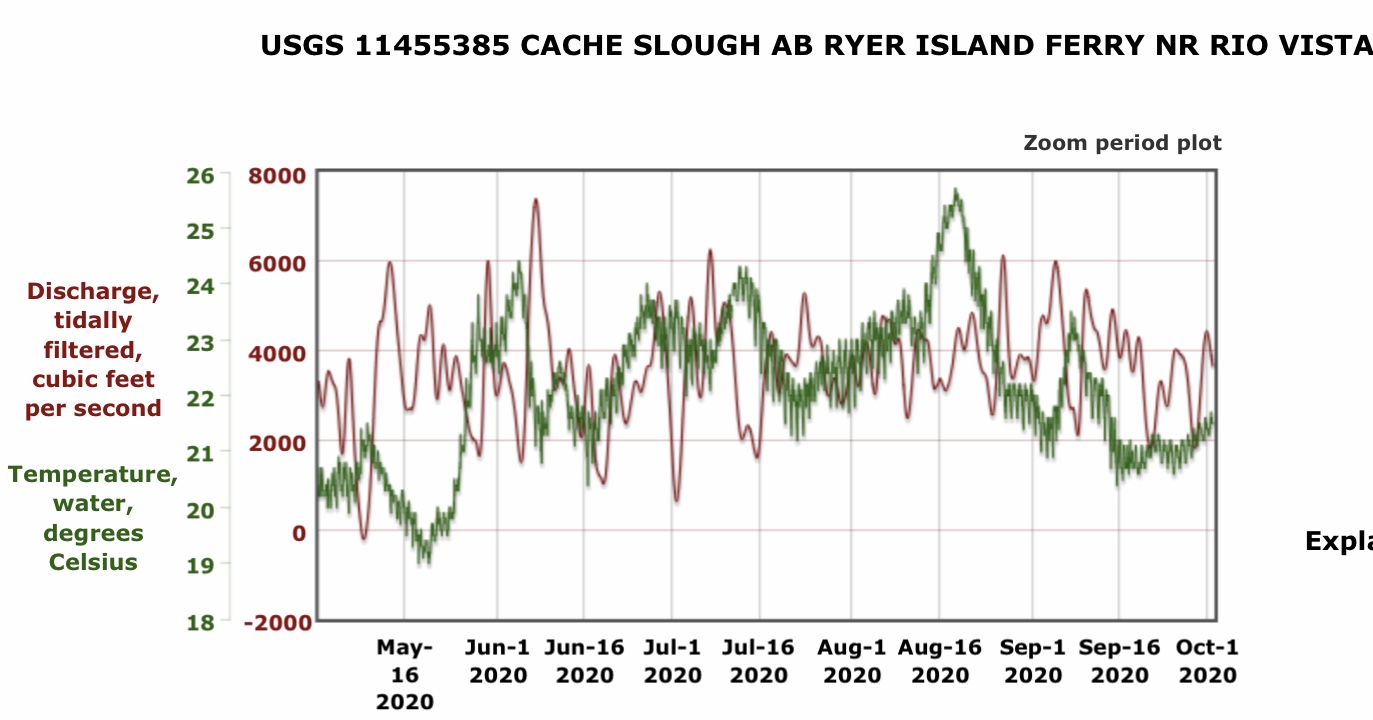 In a 9/22/20 post, I suggested summer Delta outflow standards. In this post I suggest a spring-summer water temperature standard for the Delta as further protection for salmon and smelt. Water temperatures above 23oC (73oF) are harmful to salmon and smelt, which live and migrate through the north and west Delta throughout the summer. Much of the Delta smelt population that remains is located in these regions especially in dry years.1 Spring-run and winter-run salmon migrate upstream through the area in late spring. Fall-run salmon migrate upriver through the summer.

To protect smelt and salmon, there need to be reasonable water temperature standards in the Delta. The existing water temperature standard in the lower Sacramento River above the Delta is 68oF, but managers of the state and federal water projects pay it almost no heed. There is no existing standard for the Delta. The north Delta water quality standard for the Sacramento channel in wet years should be 70oF (21oC) at Freeport and at Rio Vista. In normal and dry water years, the standard should be 72oF (22oC) at Freeport and at Rio Vista. In critical drought years, the State Water Board needs to require additional Delta inflow and curtail exports as needed to respond to extreme events (e.g., water temperatures greater than 75oF during heat waves). At critical times, a change of only a degree or two will help limit fish stress and mortality.

Higher Delta outflow and lower exports are appropriate prescriptions for maintaining reasonable water temperatures in the Delta (see Figures 1-3 and caption notes). For example, in July and August 2020 (Figures 1-3), increased inflow into the 14,000-16,000 cfs range from 12,000 cfs at Freeport could have held water temperature below 22oC. Note in Figure 3 that increased inflow can be captured by south Delta exports (Figure 3). However, during heat waves under extreme drought conditions, the State Board should also limit exports to retain outflows from the Delta to keep the low salinity zone out of the warmer Delta. Otherwise, exports will reduce the portion of Delta inflows (Freeport flows) that reach Rio Vista.

Such standards are achievable, albeit at significant water supply cost. They are worth the effort. High summer water temperatures, such as those that occurred in wet year 2019 and dry year 2020, must be mitigated. The 23-25oC conditions in summer 2020 (portrayed in Figures 1-3) should not occur, and would not under the suggested Delta water temperature standard. For wet years such as 2019 (Figure 4) and 2017 (Figure 5), water temperatures should be kept at or below 70oF (21oC) by maintaining Freeport near 20,000 cfs as needed.

In summary, Delta water quality standards should be adopted for inflow, outflow, and water temperature to protect salmon and smelt in the warmer months of the year, May-September. Such standards are needed because of recent changes in water project operations and the effects of climate change. 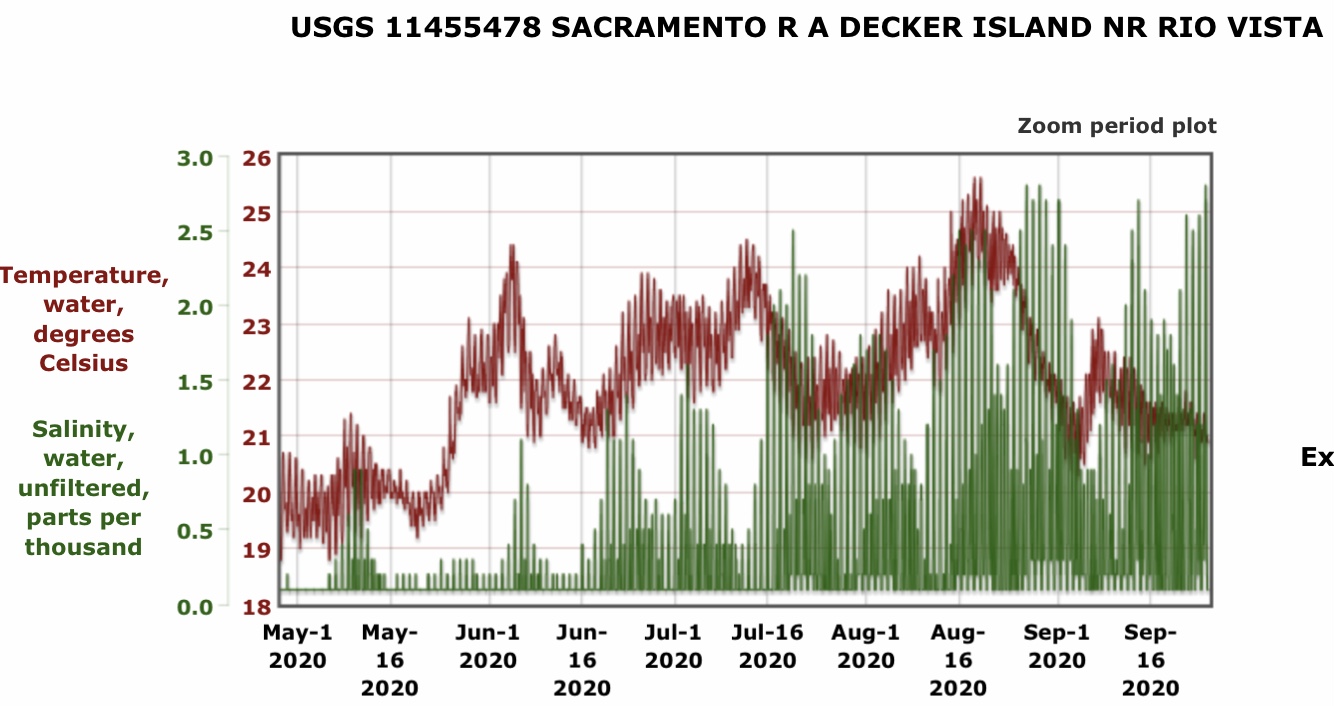 Figure 1. Water temperature and salinity in the west Delta near Rio Vista in spring-summer 2020. Note Delta draining in neap-tide periods generally brings warmer water downstream into the west Delta, except in mid-August event when a heat wave drove water temperatures up into 23-25oC range. This event was accentuated by higher exports and associated high Delta inflows.3 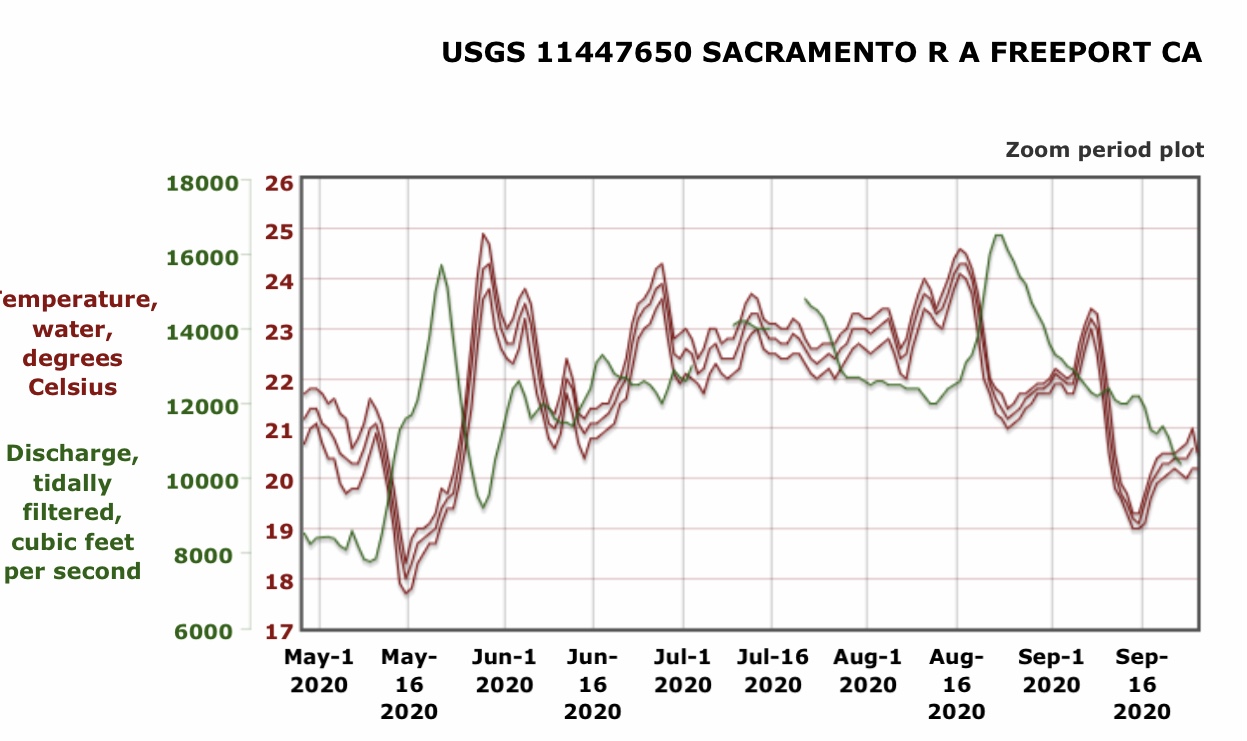 Figure 2. Water temperature and net river flow (tidally filtered) in the lower Sacramento River at Freeport in the north Delta in spring-summer of dry year 2020. Note that it took flows at or greater than 16,000 cfs to keep temperatures near 70oF (21oC). 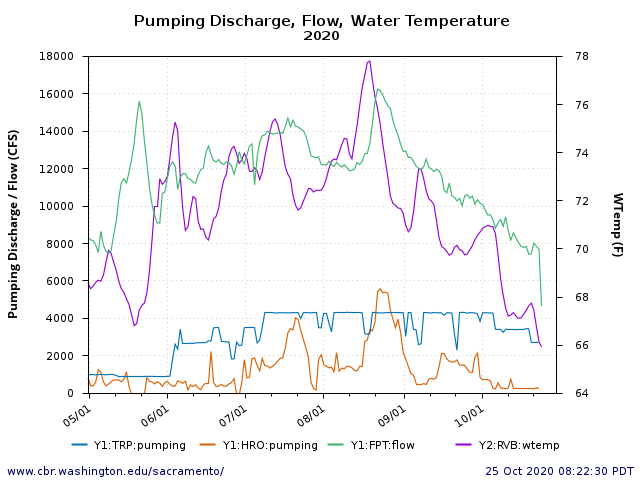 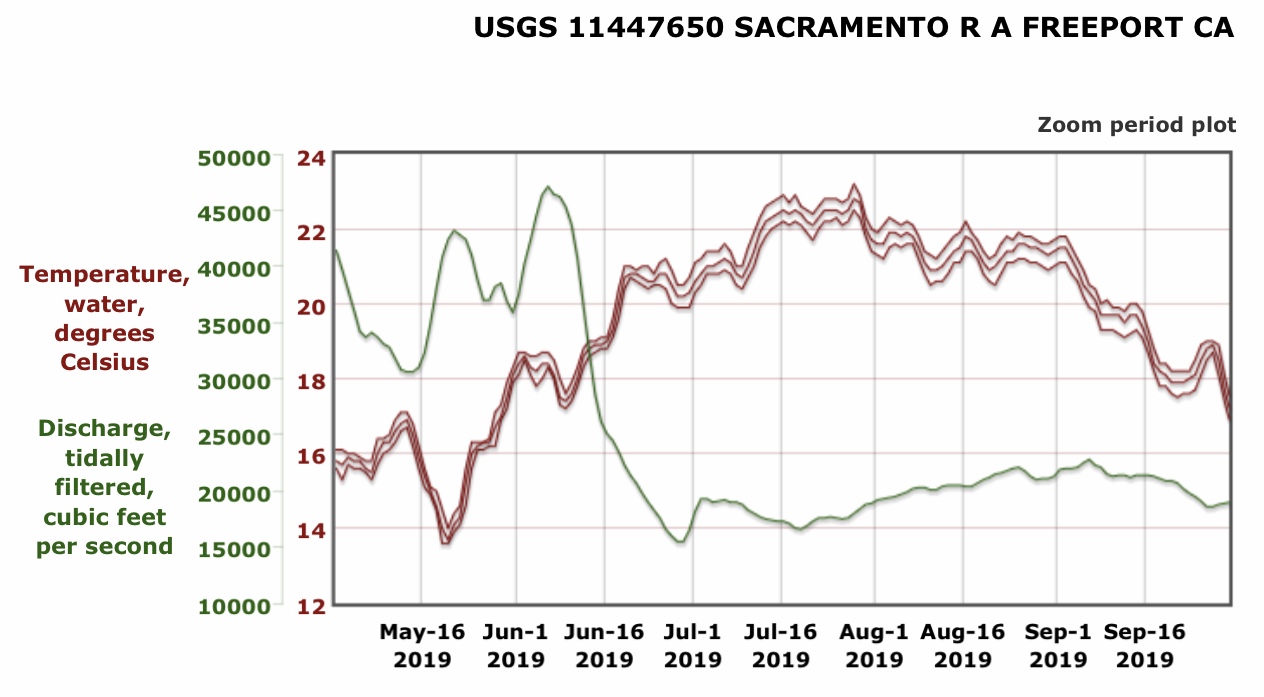 Figure 4. Water temperature and net river flow (tidally filtered) in the lower Sacramento River at Freeport in the north Delta in spring-summer of wet year 2019. Note that it took flows at or greater than 16,000 cfs to keep temperatures near 70oF (21oC). 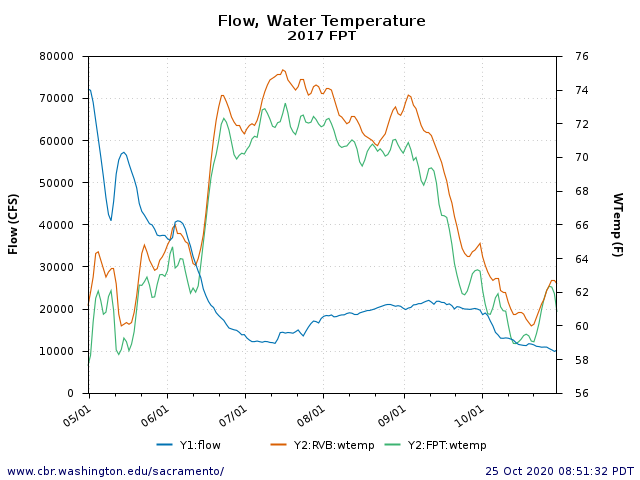 The Franks Tract Futures Project is asking for additional comments on the State’s revised concept design.1 The project is an outgrowth of the State’s 2016 Delta Smelt Resilience Strategy, which recognized that Franks Tract is a death trap for state and federally listed Delta smelt.

The original design for the project included tide gates to keep salt and smelt from moving upstream from the western Delta into Franks Tract via the False River channel. Once in Franks Tract, the smelt would most assuredly not survive. A new design “transforms the project from an early focus on establishing habitat for the endangered Delta smelt to a project that has sought input from a broad range of stakeholders.” According to the project leader, Brett Milligan from University of California:

Balancing the project’s goals has been a challenge. The first round of this project, the feasibility study, met the water quality and ecology requirements but did not meet the recreational and local economy (requirements). We heard you loud and clear. More or less, this entire last year has been to try to bring in that third tier and to balance these and see if there’s a way that the project can meet all of these criteria and be beneficial to all. The original project design failed to earn public support after it was presented in January 2018. At a crossroads, the project managers made a critical decision. They scrapped the proposal and formed an advisory committee of stakeholders with varied interests in Franks Tract rather than try to force the initiative through the process, while fighting the public every step of the way.

The new design drops the barrier/gate option as “a non-starter,” Brett explained to me. But that was the essential element of the project – stopping salt (and smelt) intrusion into the interior Delta due to the pull of the south Delta export pumps. A temporary barrier has been installed in False River in drought years to protect Delta water supplies.

The conflict is over recreational access to Franks Tract from the west via False River. A similar barrier on Montezuma Slough further west in Suisun Marsh resolved a similar conflict with a boat passage lock that maintains boating access when the barrier is in use.

At this phase of design and permitting, it would seem wise to evaluate an alternative with the barrier that includes a similar boat passage facility, so that the affected public can understand the tradeoffs. That is the purpose of the environmental review process.

Net flow (cfs) in the Ship Channel remains near zero, since the gate at the north end of the channel near Sacramento remains stuck in the closed position as it has been for several decades (Figure 2).

Water temperature (oC) is significantly higher in the stagnant flows of the Ship Channel than at Freeport, often reaching into the lethal range 23-25°C for Delta smelt (Figure 3).

Salinity (conductivity) is much higher in the Ship Channel because of discharges from urban sewage treatment plants and agricultural operations (Figure 4).

Turbidity is much higher in the Ship Channel due to higher plankton production and port-bound ship traffic in the relatively shallow and narrow Ship Channel (Figure 5).

Dissolved oxygen levels are much lower in the Ship Channel because of warmer water, high concentrations of suspended organic sediments, and higher plankton production (Figure 6).

Delta smelt are attracted to the Sacramento Deepwater Ship Channel in winter and early spring to spawn in the relatively warm, low salinity, turbid, and more productive water. The adult smelt can also easily tidal-surf up the ship channel without having to content with strong downstream currents of the Sacramento River channel. Their eggs hatch early to an awaiting abundant plankton food supply. However, in spring the Ship Channel lacks net downstream flows to carry the young smelt to the Bay. By late spring, water temperatures in the Ship Channel reach lethal levels for the young smelt.