Despite the extraordinary hazards facing salmon as described in the previous Parts 1, 2 and 3, the greatest source of mortality at the Twin Tunnels’ water intakes will very likely be caused by artificially-induced predation. This topic in the fourth part of this series is probably the most complex and, arguably, most controversial. Here is where all bets are off and we enter the realm of diverse scientific opinions among experienced fishery biologists.

The high level of concern about predation at proposed massive water intakes on the lower Sacramento River is not new. It boiled to the surface during planning for the infamous “Peripheral Canal” that was roundly rejected by California voters in 1982. Based on an extensive literature review, veteran fishery biologists Odenweller and Brown1 (1982) summarized the need for minimizing predation associated with the proposed Peripheral Canal fish facilities:

“The literature offers some assistance for minimizing and discouraging predation at the intakes and fish facilities. Piers, pilings, other supportive structures, and corners or other irregularities in a channel are referred to as structural complexities. Such structures may cause uneven flows and can create shadows and turbulent conditions. A structurally complex environment should be avoided.”

Unfortunately for salmon, the planning documents for WaterFix reveal that such artificial structures for the Twin Tunnels’ intakes will provide a vast detrimentally complex environment favoring predatory fish habitats. The documents provide no credible details on how that crucial problem will be solved.

The 2017 National Marine Fisheries Service Biological Opinion (BiOp) for WaterFix states that 32 – 40 vertical pilings will be placed directly in front of each of the three water intakes (or more than 100 total pilings!). The alignment of the pilings will be positioned just off the face of the fish screens and parallel to the migration pathway for salmon, greatly adding to the formidable gauntlet of waiting predators. Furthermore, an enormously-long floating boom (also parallel to the screens) will be supported by the pilings, accumulating and exacerbating the structural complexity Odenweller and Brown (1982) warned against 35 years ago. Even the BiOp openly admits that “These structures create habitat that provides holding and cover for predators.” I have heard it said, “We learn from history that we do not learn from history.”2 And so it goes with the Twin-Tunnels Project.

Based on research I have conducted since 1981, salmon predators are highly opportunistic and quickly adapt to habitats where salmon can easily be preyed upon. Remember the giant “toothbrush” wiper blades mentioned in Part 2 of this series? Using a high-tech sonar camera, I have observed predators hiding behind such wiper blades, darting out and eating unsuspecting salmon that have no protective cover. This clear predation predicament will be greatly intensified due to the very low sweeping velocities at the proposed WaterFix fish screens (discussed in Part 1 of this series). Predatory fish (e.g., striped bass and pikeminnow) can easily swim back and forth in front of the screens with minimal expenditure of energy, gobbling up highly-vulnerable, fatigued salmon like popcorn.

Although problems facing salmon will be worse when the intakes are in operation, the in-river structures alone will remain a serious hazard for salmon even when no water is diverted. For example, if those facilities were in place during the recent four-year drought, little or no water would have been diverted into the Twin Tunnels. Nevertheless, the salmon would still have had to migrate past the non-operating intakes where predation would likely remain high. I have already observed large numbers of striped bass concentrated near an artificial structure just upstream of the proposed intakes locations (see: Striped Bass). The WaterFix structures will be permanent fixtures in the river, forever tipping the scales in favor of predatory fish habitats over salmon habitats.

Unfortunately for the salmon, there is not just one, but three intakes for WaterFix. In the worst-possible scenario for salmon, all three water intakes are to be located on the same side of the river and in relative close proximity. Water (and therefore fish) will be driven toward the east riverbank, particularly when all intakes are operating in unison. Up to 3,000 cfs will be removed from the river at each of the three intakes with many baby salmon undoubtedly drawn to the east riverbank. What this means is that the increasingly fatigued and exposed downstream-migrating juvenile salmon will become more and more consolidated along the east bank of the river as the fish traverse the long length of each individual screen structure and arrive (if the fish have not already perished) at the downstream end (Figure 1). This sequence of events will culminate in a very undesirable concentration of salmon, but a perfect environment for the predators as well. Predatory fish will unquestionably become accustomed to these ideal “feeding stations” at the lower end of each fish screen. These highly-adaptable predators simply have to wait for dinner to be delivered at the downstream end of the fish screens. The resultant impacts on juvenile salmon could well be catastrophic. WaterFix does not describe tangible solutions for how this grave predation dilemma can be avoided other than employing the use of “adaptive management” (discussed next in this series). 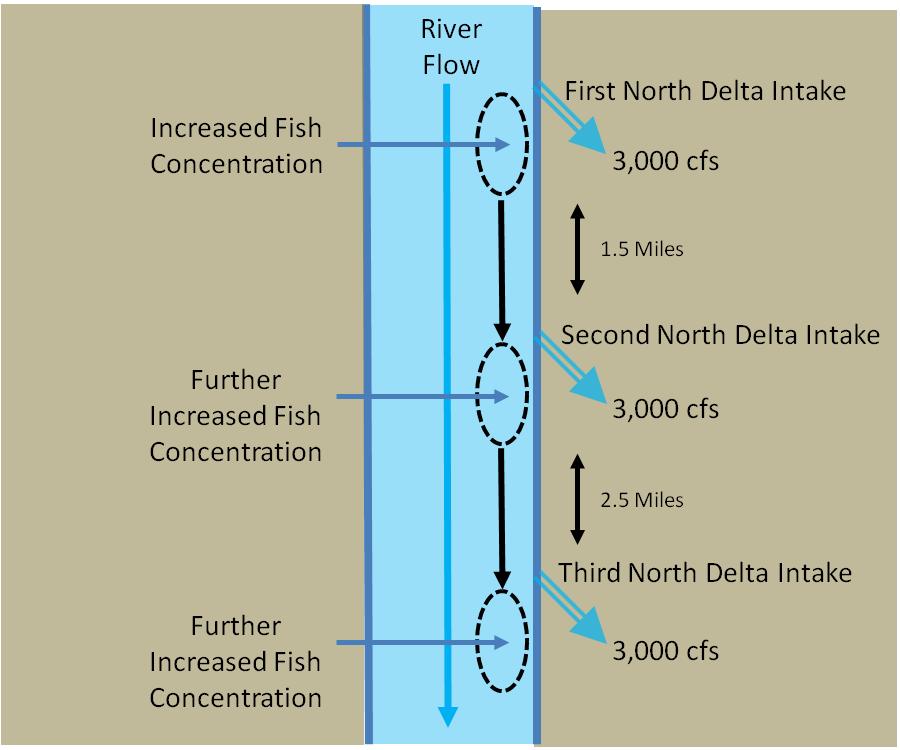 Figure 1. Conceptual plan-view schematic (not-to-scale) of the three proposed WaterFix intakes on the Sacramento River and the concentrating effect on downstream migrating salmon toward the east or left bank (facing downstream).

Next in the Series:  Adaptive Management – Salmon Salvation? 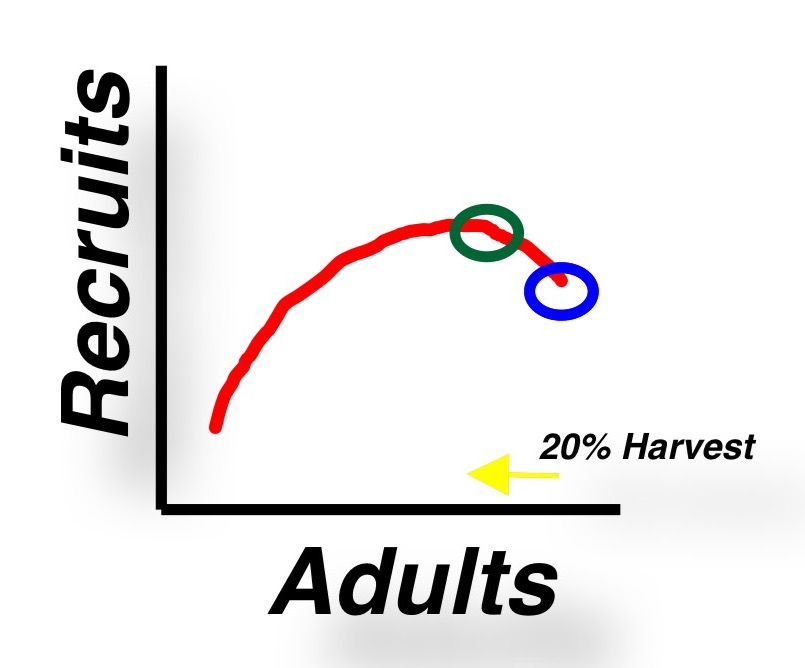