Despite falling river flows and lower reservoir releases, the US Bureau of Reclamation and the California Department of Water Resources maintained Delta outflows and the prescribed fall salinity in the Delta (X2 located at Chipps Island, River Kilometer 74) in the last half of August, September and October 2019. They did this by sharply reducing Delta exports (Figures 1 and 2). These actions helped to maintain low salinity habitat in (and flow through) Montezuma Slough in Suisun Marsh (Figure 3).

High Delta outflow and reduced Delta exports in September and October are good for all Delta native fishes. These conditions protect wild juvenile winter run salmon that began migrating downstream into the Delta (Figure 4). Delta smelt and longfin smelt remained in the Bay, west of the Delta.

Fall X2 was a provision of the 2008 and 2009 Biological Opinions for the Long-Term Operations of the Central Valley Project and the State Water Project. It applied only in Wet and Above Normal water years. New Biological Opinions released in October 2019 have moved the initial compliance point for the Fall X2 requirement upstream to River Kilometer 80, reducing low salinity habitat by pushing it further up into the Delta. 1 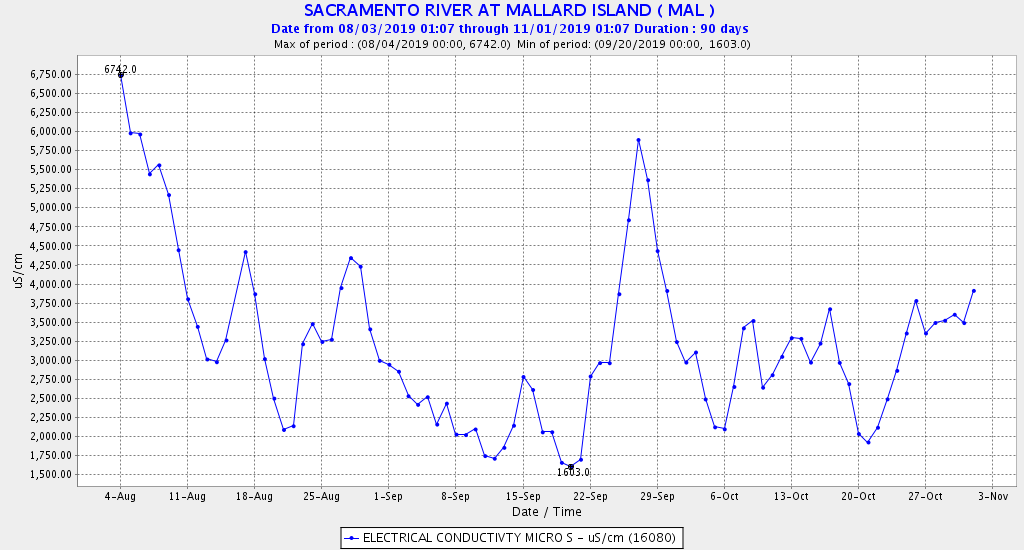 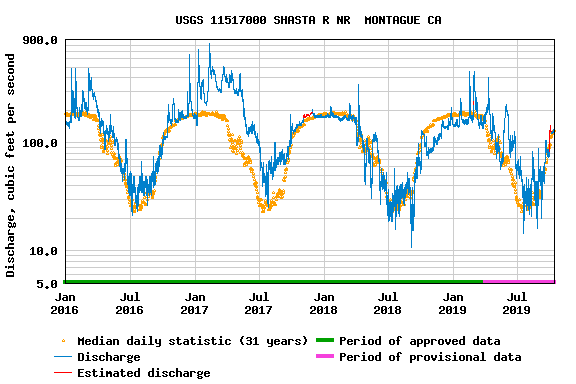 The Endangered Species Act (ESA) directs all federal agencies to work to conserve endangered and threatened species and to use their authorities to further the purposes of the Act. The purpose of the Act is to protect and recover imperiled species and the ecosystems upon which they depend. Protect means to not allow “take” of listed species. If some take occurs despite best efforts, then “reasonable and prudent” alternatives (RPAs) may be needed to protect the threatened or endangered species.

The US Bureau of Reclamation and its partner the California Department of Water Resources (permittees) operate the federal Central Valley Project (CVP) and the State Water Project (SWP) under federal and state ESA “take” permits issued in 2008-2009 biological opinions that included RPAs. The RPAs constrained water supply deliveries and other project operations during the past decade to protect listed salmon, smelt, sturgeon, and steelhead.

Over the past decade, the parties have reinitiated consultation to revise take permits and RPAs. The initial motivation for reinitiation was that RPAs and take limits were not protecting or recovering the listed species. The US Fish and Wildlife Service (USFWS) and the National Marine Fisheries Service (NMFS) recognized that more stringent measures were needed. A series of draft opinions were developed with further protections, culminating with a July 1, 2019 draft jeopardy opinion from NMFS on Reclamation’s proposed action as of that time. A jeopardy opinion occurs when an action is reasonably expected, directly or indirectly, to diminish a species’ numbers, reproduction, or distribution so that the likelihood of survival and recovery in the wild is appreciably reduced.

Reclamation updated its “proposed action” in response to the draft jeopardy opinion. “It must also be acknowledged that the current status of all these species continues to be imperiled, and that one of the objectives of the proposed action is to maximize the available supply of water for irrigation, municipal, and industrial deliveries.”1 Reclamation doubled down. Reclamation’s most recent proposed action includes some provisions of the 2008/2009 biological opinions’ RPAs and recent jeopardy draft BO. In response, the Services relented under pressure from the Trump administration, replaced technical staff with a new group of managers, and recently issued final non-jeopardy opinions.

The new proposed action from Reclamation can now go into effect without RPAs that would hinder Reclamation from maximizing water deliveries. The new Biological Opinions will govern project operations under a wide array of vague commitments to protect and recover listed species: some good, some bad, and some simply ugly.2

The Good (Well, as Good as it Gets)

So much is missing that is within state and federal governments’ power and authority in the final approved Reclamation proposal. Here is a limited selection.

Reclamation’s proposed action has been approved by the Services. The proposed action includes some good concepts for protective measures (though generally the requirements are vague, underfunded and not enforceable), and a suite of bad and downright ugly actions that will harm affected listed fish species. The overall mix will lead to much confusion, wringing of hands, blaming, ignoring of responsibility, initial lawsuits, and (if the initial lawsuits fail) further lawsuits when fish metrics fail to show improvement. Some actions will take time to implement, while some are already too little too late.

The Services should have issued jeopardy opinions with a suite of appropriate RPAs. That did not happen. Instead, the Services are allowing further risk of extinction to the listed species. The best example of this is allowing expected temperature-dependent egg mortality levels for Sacramento River winter-run Chinook salmon to occur in “Tier 3 and 4 years.” Mortality due to allowed temperature exceedance was a major cause in the recent decline in the winter-run salmon population, one of the few species listed as “endangered” rather than the more common “threatened” designation. The effect the salmon BO will allow is entirely avoidable and within the control of the state and federal agencies involved in permitting the CVP. NMFS has designated winter-run as a “Species in the Spotlight”; it’s more likely that it is now a “Target for Extinction.”