In a prior blog entry on this site, the importance of restoring juvenile salmon rearing habitats in the upper main stem Sacramento River downstream of Keswick Dam was described:   http://calsport.org/fisheriesblog/?s=rearing+habitat.  The main river channel is actually a harsh environment for young salmon upon emergence from the river gravels after hatching.  The weak-swimming fry are immediately exposed to very high water velocities and most of the riverbed lacks structure to provide those fish with velocity and predator refugia.  One hypothesis, albeit very difficult to prove, is that insufficient rearing habitats in the upper river may be a significant limiting factor for the salmon runs, particularly for the endangered winter-run Chinook.

Although the notion of increasing the quantity and quality of rearing habitats in the main stem Sacramento River has been discussed for decades, meaningful on-the-ground restoration actions have been lacking.  That circumstance is changing.  A management action now being pursued is the restoration of side channels that have lost ecological functions for salmon rearing, primarily because of diminished or total lack of hydraulic connectivity with the main river channel.   Many of the historical side channels have become plugged, stagnant, and choked with overgrown vegetation; excellent frog habitat, but not for salmon.

A major endeavor to reopen some side channels, probably the most complex in modern times, was recently completed on the upper Sacramento River in Redding, California (Figure 1).  Termed the North Cypress Street Project, multiple agencies and stakeholders successfully planned, initiated, and completed this action in 2016.  Finishing touches on the project were completed just prior to the new year.  Funding was provided by the Central Valley Project Improvement Act Anadromous Fish Restoration Program.  According to the Western Shasta Resource Conservation District which provided oversight for the entire effort, restoration of these side channels will provide rearing habitats for winter-run and fall/late-fall-run Chinook (Figure 2) through the provision of optimal flows, refuge from predators, and increased food sources.  The habitats will be particularly important for winter-run Chinook because nearly the entire population now spawns upstream of the site. 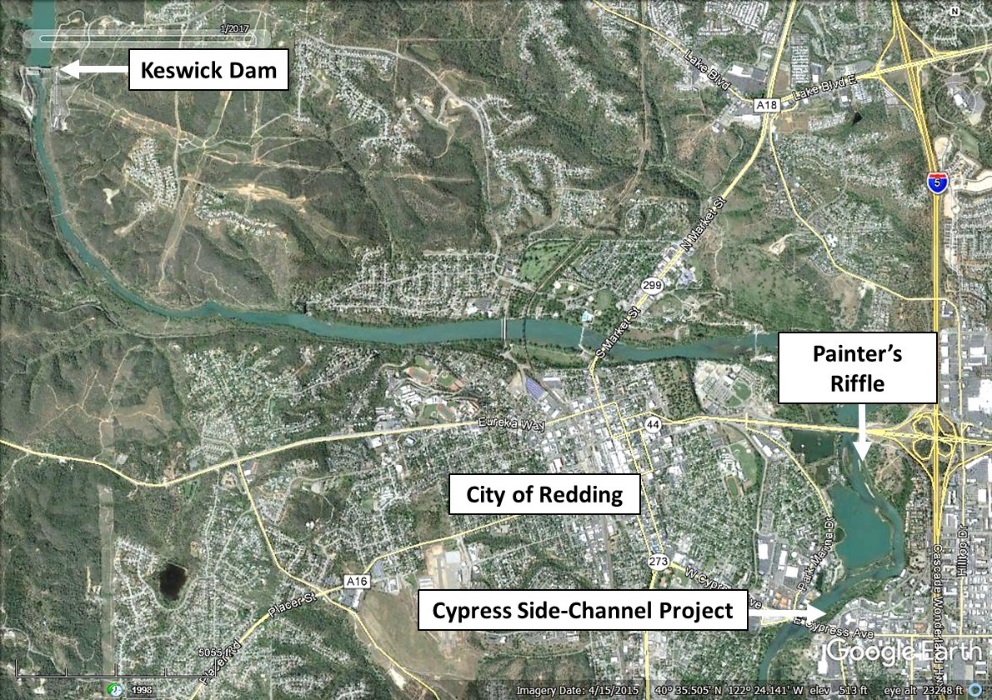 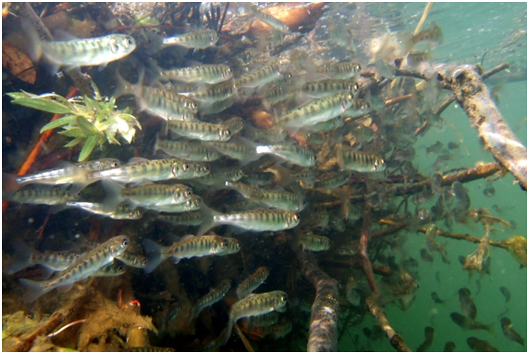 The completed restoration provides up to 1.48 acres of new side-channel rearing habitats at the minimum Keswick Dam release of 3,250 cfs (Figure 3).  The restoration included installation of numerous large woody debris structures to increase the habitat complexity for young Chinook.  Video footage of the project by John Hannon is provided at:  Side Channel Projects

More such actions are planned for implementation on the upper Sacramento River in 2017 and years beyond. Figure 3. Post-construction schematic of the North Cypress side-channel project. Restored side channels are depicted by blue lines (courtesy of the Western Shasta Resource Conservation District). Sacramento River flow is from the upper right to the lower left in the photograph.