The proposed “Twin-Tunnels Project” (aka “WaterFix”) would divert enormous quantities of water1 from the Sacramento River to the south Delta for export into the San Joaquin River basin and southern California. If the project is built as presently planned, it will likely be a disaster for salmon for reasons described in this series. Water entering the two gargantuan tunnels would be pulled through three colossal water intakes2 directly on the banks of the Sacramento River, a short distance downstream from the City of Sacramento. Except when the Yolo Bypass is flooding, all four runs3 of Chinook salmon in the entire watershed would be forced to migrate past these enormous diversions. Three extremely long flat-plate fish screens would be positioned in front of each huge water diversion intake (Figure 1). The size of these screen structures will be massive, greatly exceeding the size of existing fish protective facilities in California. The combined length of the three screens will extend nearly 3/4th of a mile! The concept has never been tested elsewhere, possess numerous harmful obstacles for fish, and will likely kill large numbers of salmon. There is a high probability the structures will be catastrophic for salmon and severely undermine progress for salmon restoration in upstream areas. This series provides some highlights into the scientific basis to support that premise. Figure 1. Conceptual rendering of one of the three on-bank intake facilities on the Sacramento River for the Twin-Tunnels project (Figure 3-19a from the 2016 Final EIR/EIS).

Just like the old adage with real estate, fish screens must be located in good locations. Based on my 35+ years experience in the evaluation and bio-engineering of fish screens, in terms of hydraulic, physical, and biological conditions for fish protection, the proposed water intakes for the Twin-Tunnels are sited in some of the worst locations. Over a period of years, the Twin-Tunnels proponents presented the state and federal fish agencies with multiple hypothetical intake locations. It is evident that the agency representatives had no choice but to play with the losing hand dealt to them and recommended only general criteria that were severely constrained by the intakes sites. All of the options put forth were crappy … really crappy… for fish protection. It is obvious to me that the sites ultimately designated for the Twin-Tunnels project were not chosen because those locations would provide good fish protection but, instead, viewed as more favorable (but still bad) among the worst locations made available.

Because of the bad locations, the Twin-Tunnels’ screens will not have good “sweeping” flows to get the salmon out of the danger zone at the screens. Modern-day fish screens possess several features to help overcome the sweeping flow predicament for the Twin-Tunnels project. Sweeping flow complications can be partially alleviated by locating the screens on the outside bends of the river channel. An existing example of large Sacramento River flat-plate screen location demonstrates how that measure has been successfully implemented (Figure 2). In sharp contrast to such a real-world example, the three WaterFix intakes would be positioned in only very slight (or “gentle”4) river bends or relatively straight sections of the river channel (e.g. Figure 3) and, in all cases, undesirable lower gradient reaches of the river. Additionally, the Twin-Tunnels diversion intakes will be located in areas subject to tidal influence, further exacerbating the problems of ensuring protective sweeping flows. When the tide comes in twice a day, sweeping flows are reduced to the detriment of salmon. 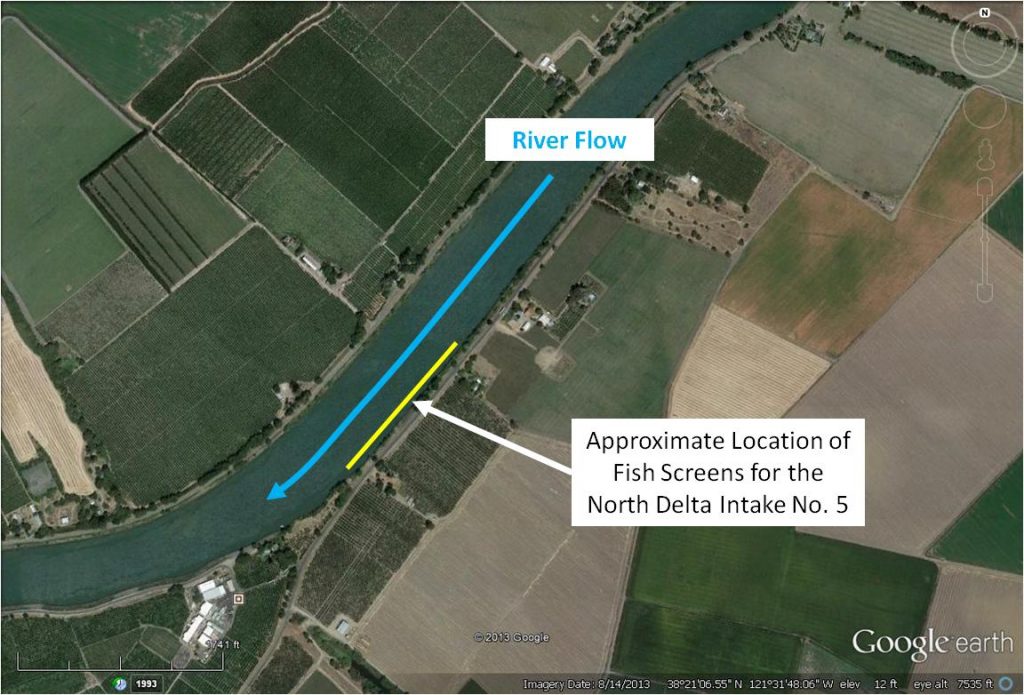 In summary, the Twin-Tunnels’ diversion sites will not provide the near-screen sweeping velocities necessary to protect downstream-migrating salmon. The noteworthy point is that past experience has clearly demonstrated that maintaining high sweeping velocities in front of large riverine flat-plate fish screens requires at least one of following to take place:

Unfortunately, the Twin-Tunnels’ intakes do not possess any of those conditions — period. Even the recently-issued National Marine Fisheries Service’s Biological Opinion on the Twin-Tunnels Project admitted that there is “a high degree of uncertainty” if the fish screens can be built to meet fish protection criteria because of the immense nature of the proposed screens.

Next in the series: How to squish baby salmon on a fish screen.