Though I hate to “beat a dead horse” or perhaps more appropriately “put another nail in the coffin,” I’m sad to report that the California Department of Fish and Wildlife’s first two fall trawl surveys for 2018 collected no Delta Smelt. This is consistent with this past summer’s townet survey results. Let’s get on with implementing the smelt hatchery program. 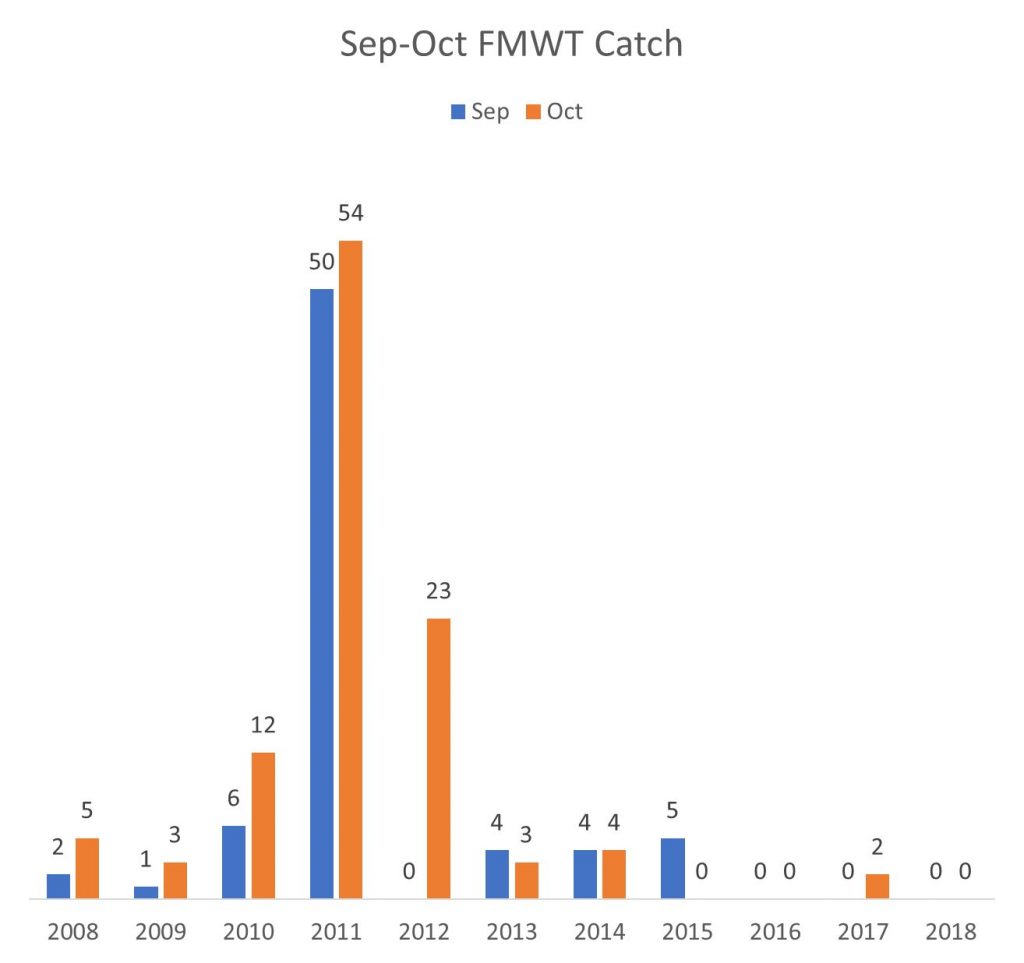 In a surprise move, PG&E announced on February 2, 2017 that it was withdrawing its application to relicense the DeSabla – Centerville Hydroelectric Project on Butte Creek and the West Branch Feather River.  The reach of Butte Creek affected by the Project is home to the only remaining viable population of spring-run Chinook salmon in California’s Central Valley.

Spring-run salmon in Butte Creek have seen a resurgence over the last twenty years.  A substantial part of this was due to investments and improvements downstream of the Project. In addition, since 2003, PG&E and state and federal resource agencies have greatly improved the management of the Project for the fish.

From 2004 to 2009, PG&E went through a formal relicensing process with the Federal Energy Regulatory Commission (FERC) to relicense the Project.  In 2016, the State Water Board issued a Water Quality Certification needed for a new license.  A new license from FERC was widely expected in 2017.

In a DeSabla – Centerville fact sheet and map that PG&E distributed with its announcement, PG&E describes the project as follows:

The Project diverts a portion of the natural flow of water from Butte Creek and West Branch of the Feather River (WBFR) into canals that carry the water for use in hydroelectric powerhouses. Once water is run through the powerhouses it is ultimately released to Butte Creek. During the summer, the natural flow of the WBFR is augmented by water releases from Round Valley and Philbrook reservoirs. Project diversions have provided additional flow to Butte Creek for more than 100 years. One of the beneficiaries of this additional flow has been the aquatic community in Butte Creek, including Central Valley spring-run Chinook salmon.

The DeSabla – Centerville Project facilities are built around infrastructure that dates to 1900 and in some cases before.  Commissioned in 1900, Centerville Powerhouse has been offline since 2011, and ran only partially for the five years previous to that.  To function at all, it would need a complete rebuild.  The estimated cost to rebuild was $39 Million in the mid-1990’s; it is almost certainly now double that, or more.  DeSabla Powerhouse, nine miles upstream of Centerville, is relatively modern and in good condition, but the small reservoir that feeds it allows water to heat up too much passing through.

In California’s modern energy market, the capability to regulate the grid gives hydropower its greatest value.  But unlike many other hydropower projects, powerhouses in the DeSabla – Centerville Project run at a constant rate, day and night, regardless of when power demand is high or low.  They also have no ability to help regulate the power grid, especially to respond to short-term changes in supply from intermittent renewable sources like wind and solar.

The real value of the Project is the water it imports from the West Branch Feather River to Butte Creek: value for the fish and value for the farms that use the water further downstream.  The fish can’t pay for this service; the farms have never been asked to pay and never have.

PG&E’s decision not to relicense the Project does not lead to a path that is simple.  In the next few months, moving into the next few years, PG&E will need to establish a stakeholder engagement process to help determine the Project’s long-term disposition.  PG&E will need to engage resource agencies, downstream water rights holders, interested NGO’s, and local residents.  The DeSabla – Centerville Project has been part of the community for over a century.  Its resource values are enormous.  The water that it supplies downstream is essential to the irrigation of thousands of acres of crops.

On September 19, 2015, PG&E bought an advertisement on the editorial page of the San Francisco Chronicle entitled:  “Of Bees, Birds and Chillin’ Chinook: All in a Sustainable Day at PG&E.”  Mr. Tony Earley, CEO of PG&E at the time, started the ad by extolling PG&E’s work to keep salmon in Butte Creek cool.  His major theme stated: “The days are long past when energy companies could afford to think of their mission as separate from conservation, sustainability and good management of our natural resources.  Our view must be for the long term.  That’s why we live our commitment to conservation through a number of programs.”

We look forward to the opportunity to help PG&E maintain this well-stated goal.