Green and White sturgeon spawn in the Sacramento River in spring, usually in April and May. Green sturgeon spawn predominantly above Red Bluff (RM 243) to near Redding (RM 264); they also spawn below Red Bluff, downstream to Hamilton City (RM 200) (see Figure 1). White sturgeon spawn primarily below Hamilton City in the lower river above and below Wilkins Slough (RM 125, downstream of area shown on map). Like other endangered fish in the Central Valley, sturgeon too were hurt during the recent four years of drought 1 by low flows and high water temperatures. 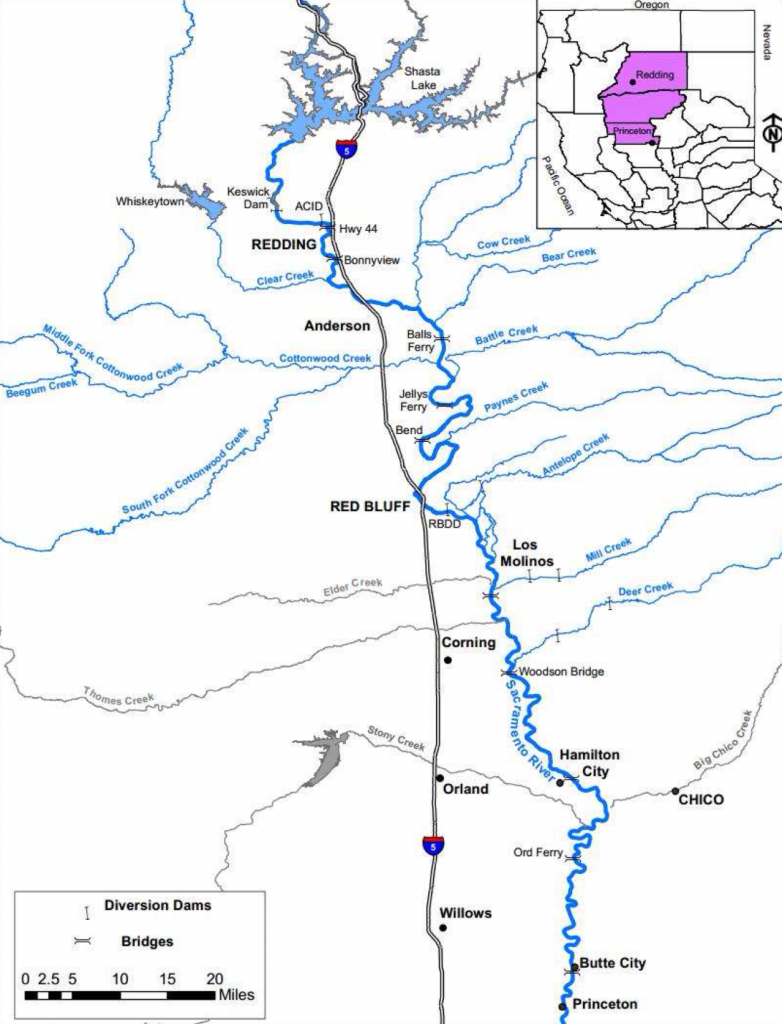 But this year is supposed to be different. Water Year 2016 is a wetter year (designated “Below Normal” for Sacramento Valley), and Shasta Reservoir is nearly full. Reclamation’s Central Valley Project should be able to meet the criteria set forth in the Basin Plan, Water Right Order 90-05, and the salmon and green sturgeon Biological Opinion that are designed to maintain habitat for salmon and sturgeon in the Sacramento River. Those criteria have a common element of maintaining Red Bluff (RM 243) spring-summer water temperature below a daily average of 56°F. The Basin Plan extends the criteria downstream to Hamilton City (RM 200) and adds a 68°F criterion from there downstream to Sacramento (RM 60) to protect salmon, sturgeon, and other fish. The criteria have been in place for decades, and are based on extensive science. Salmon spawning requires daily average water temperatures below 56°F. Water temperatures above 68°F are lethal to juvenile sturgeon.2 Governing requirements in each of the documents cited above allow the applicable criteria to be applied further upstream in drier years when Shasta storage and cold-water pool resources are less than adequate.

This year, the responsible agencies have apparently decided that the cold-water pool volume is inadequate despite the fact that Shasta is virtually full. The agencies have set the Control Point at Redding, with a 58°F daily average limit. By allowing the Red Bluff 56°F objective to be substantially weakened, the National Marine Fisheries Service (NMFS), the federal agency responsible for salmon and sturgeon, is thus accepting great risk not only to Winter Run salmon (decimated over the past two years), but also to green and white sturgeon.

To save the Shasta cold-water pool, Reclamation has been releasing a minimum amount of water from Shasta and is taking the water primarily from the upper warm surface layers of the reservoir.3 This has resulted in water temperatures in the lower river at Red Bluff in excess of 56°F (Figure 2). It has also resulted in water temperatures below Red Bluff (Figure 3) that exceed 65°F, the upper thermal optima for sturgeon embryo development, and even 68°F, the lethal level for newly hatched sturgeon juveniles.4 The warm water in the lower river is also a consequence of unusually low seasonal flows in the lower Sacramento River in spring 2016 (Figures 4 and 5).

May and June are precisely the months of concern for the sturgeon. Sturgeon begin spawning when water temperatures start to exceed 55°F, which generally occurs in April. Green sturgeon young spawned above Red Bluff pass downstream through Red Bluff in May and June (Figure 6). Those passing Red Bluff and those spawned between Red Bluff and Hamilton City likely encountered their upper thermal optima of 65°F during May and early June. White sturgeon spawned in the lower river were subjected to lethal water temperature during much of May 2016. Lethal water temperatures predominated in May 2014 and 2015 (Figure 7), Critically Dry years, as well as in Below Normal 2016 (Figures 3 and 7). River flows at Wilkins Slough were also very low in these same years (Figure 5). In contrast, higher flows and lower water temperature were maintained in spring of years 2008-2013, which included four drought years.

The overall risk is greatest to White sturgeon, which spawn in the lower river where water temperatures are highest. That high risk is the result of unusually low seasonal river flows from a seemingly overzealous need by Reclamation to conserve Shasta storage this year. This effect is compounded by the fact that, of the 7000 cfs being releases from Shasta, only 3000 cfs is reaching the lower river. The rest is diverted by Reclamation’s north of Delta contractors, who received 100% of their allocations this year.

For more detail on the issue see the following: 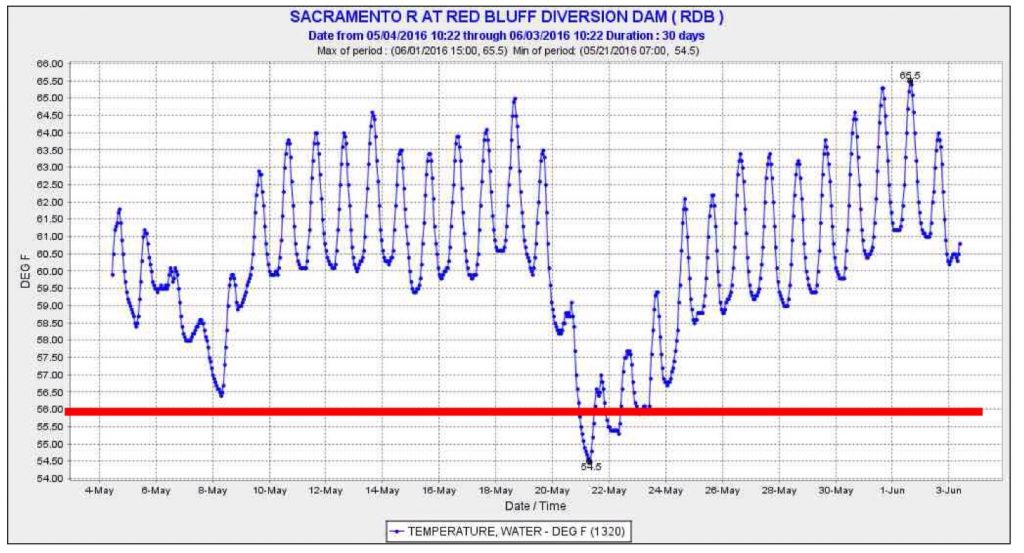 Figure 2. Water temperature of Sacramento River at Red Bluff (RM 243) in May and early June 2016. Target for salmon and other fish is 56°F (red line). Figure 3. Water temperature of Sacramento River at Wilkins Slough (RM 125) in May and early June 2016. Target for sturgeon and other fish is 68°F (red line). 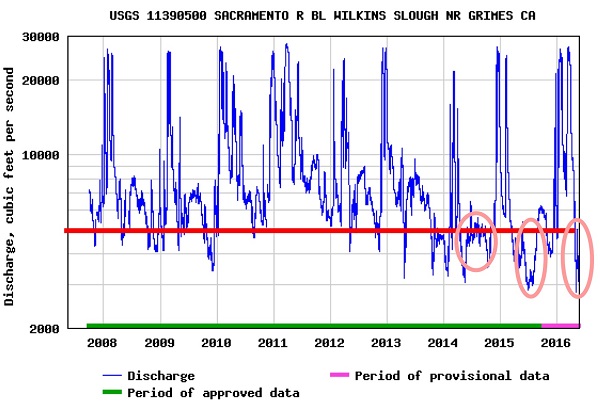 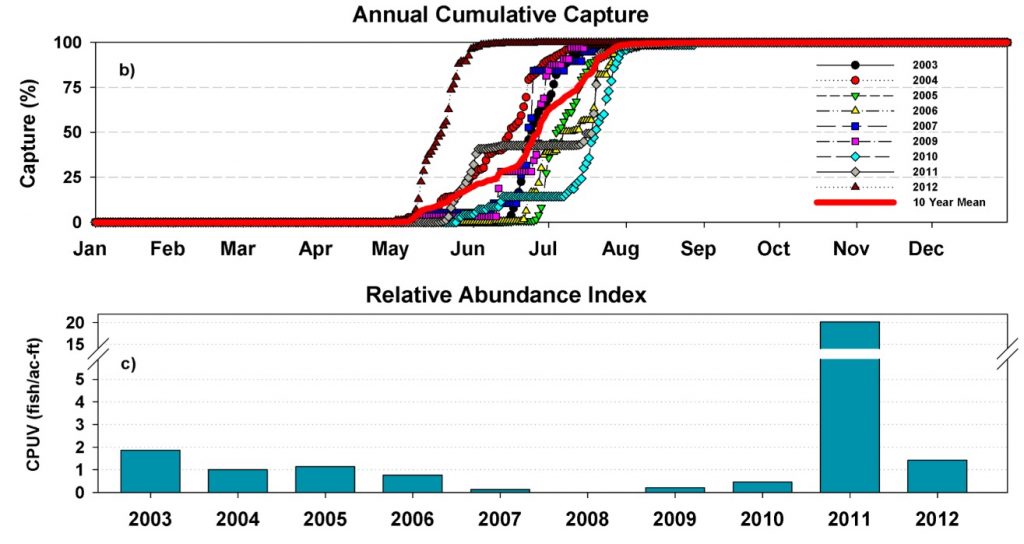 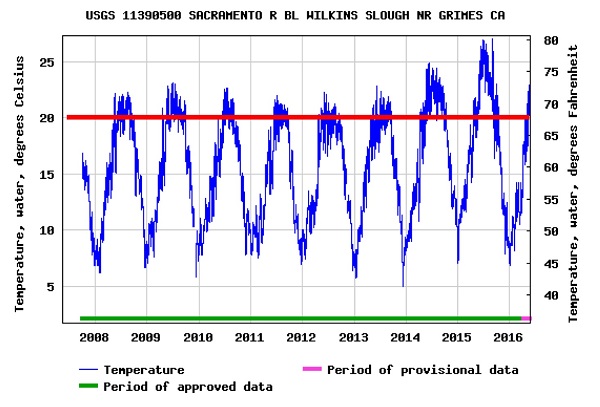 Figure 7. Water temperature in the Sacramento River at Wilkins Slough 2008-2016. The Basin Plan objective and the lethal water temperature for young sturgeon of 68°F is depicted with red line.