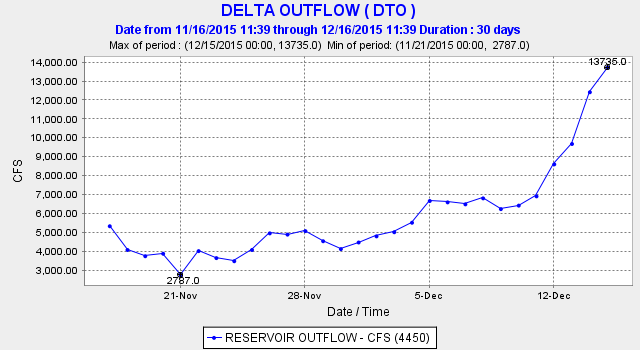 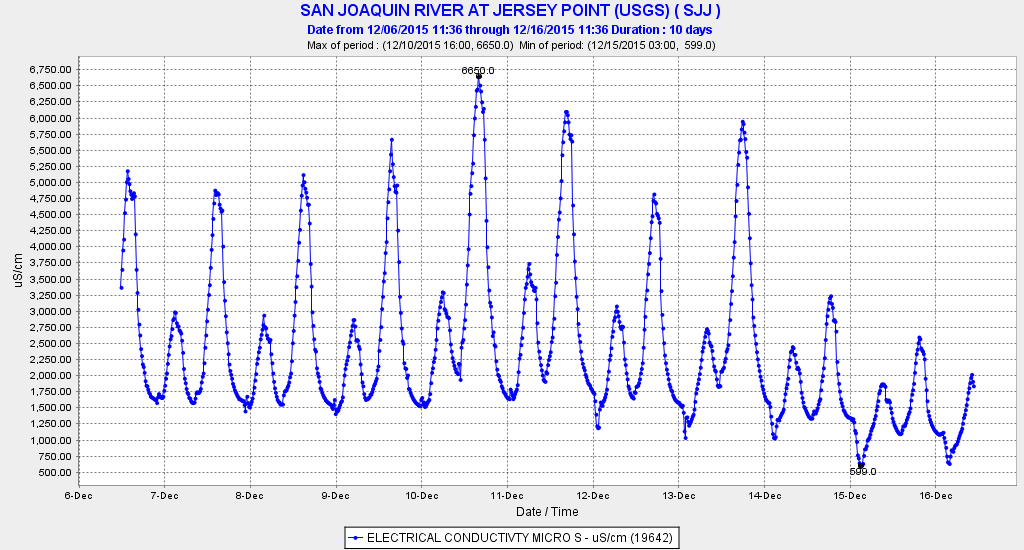 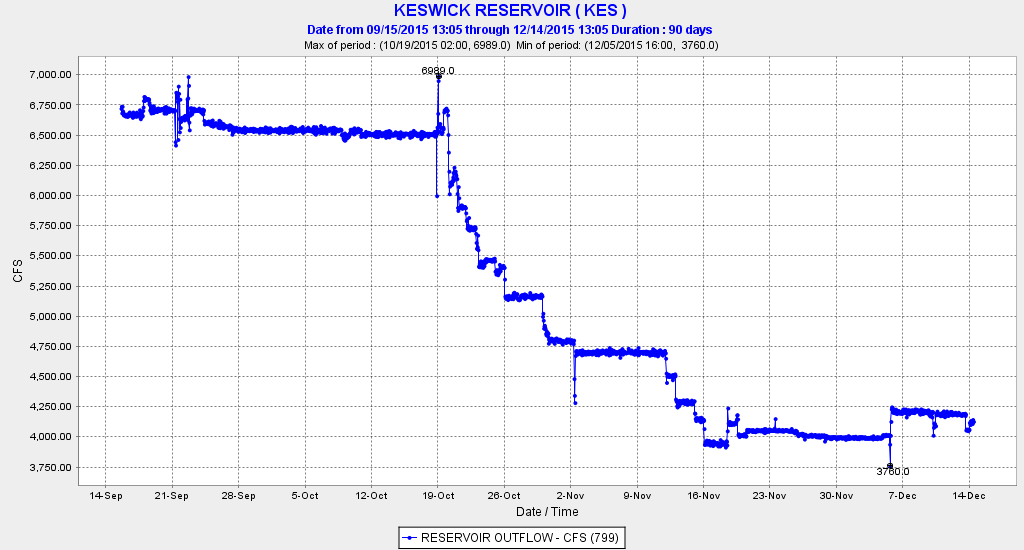 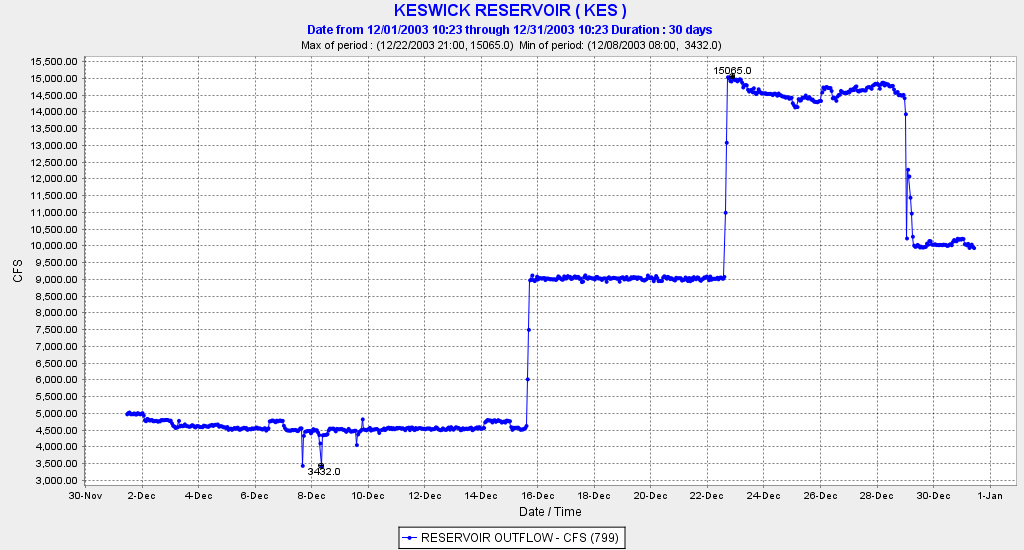 In an earlier post, I suggested “spill” to help recover salmon in the Central Valley. Spill is nomenclature used for reservoir releases. In this case I refer to spill as reservoir releases to help juvenile salmon emigrate from spawning reaches below dams to the ocean. On the Columbia River, “spill” refers to reservoir releases around hydropower turbines usually through spillways. Such spills have been used successfully on the Columbia River to avoid turbine passage that may kill young salmon and to create flows through and below reservoirs to reduce young salmon mortality by shortening their emigration time. On the Sacramento and other Central Valley rivers, “spill” releases can go through hydropower turbines because young salmon start their emigration below the dams. Young salmon have been found to emigrate during flow pulses, with survival directly related to the amount of flow.

More “spill” below the rim dams is needed in the Central Valley to increase survival of naturally produced (wild) salmon and steelhead. Spills help young salmon emigrate from tailwater spawning and rearing reaches below dams to the Delta, Bay, and ocean. Both timing and magnitude are important. Timing relates to when the young salmon are ready to migrate and to natural flow pulses in the Valley. Magnitude is simply how much flow, which relates to precipitation and available reservoir storage supply.

Most of the Chinook salmon runs emigrate to the San Francisco Bay-Delta as fry soon after hatching. Some migrate as sub-yearling fingerlings and smolts1 while a few migrate as yearling smolts.

Winter Run hatch in late summer and early fall in the Sacramento River below Shasta and Keswick reservoirs. They usually emigrate as fingerlings and pre-smolts to the Delta when the river cools, especially during the first flow pulses in late fall and early winter. In drier years they may not emigrate until February or even March. Generally they move down to the Delta in the first flow pulse in December (Figure 1).

Late Fall Run also hatch in winter in the Sacramento River below Shasta and Keswick reservoirs. They usually emigrate as yearling smolts in late fall or early winter, at the same time as the Winter Run. Unlike Winter Run, they are often fully developed smolts and thus migrate quickly to the ocean.

Spawned in early fall, Spring Run hatch and migrate as fry and fingerlings with the first pulse of flow in late fall and early winter. Some migrate as presmolts and smolts in spring.

Spawned in fall, Fall Run hatch and emigrate as fry in winter during flow pulses. Some emigrate as fingerlings and pre-smolts in spring. 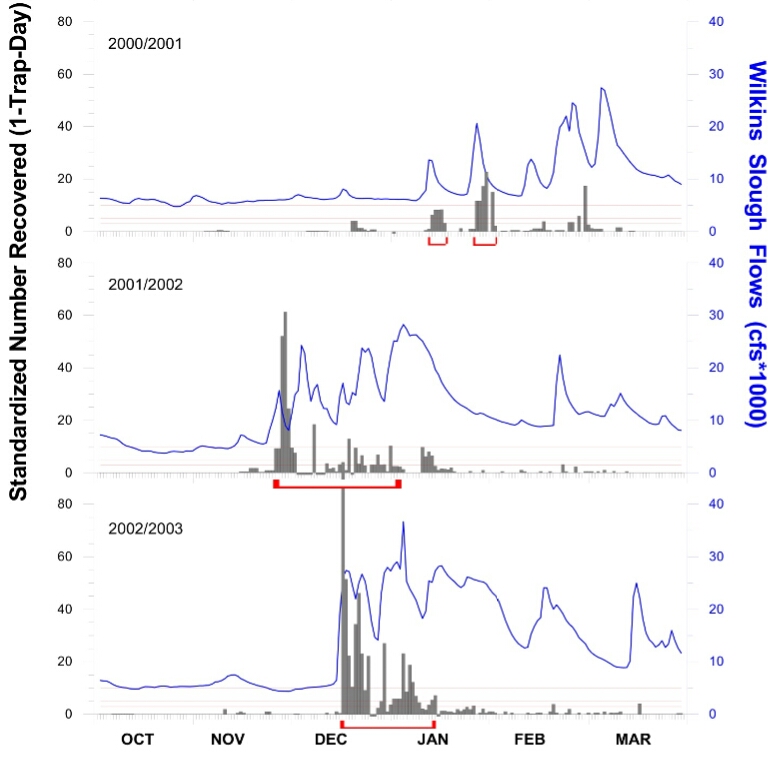 To illustrate my recommendations, I focus on 2015 – a drought year with very limited reservoir supply and managed spill potential. Such years would be considered worst case scenarios for applying spill prescriptions. Yet despite limited potential in 2015, there were opportunities with the available supplies and precipitation to provide spill that would have substantially benefited salmon. Below are charts of flows for drought water year 2015 that depict the effects of two storm periods on Delta inflow and outflow. Delta inflow came primarily from runoff in un-dammed tributaries. Figure 2 depicts Delta inflow at Freeport with two distinct pulses of storm flow. These same flow pulses are apparent as Delta outflow to the Bay in Figure 3. Below Shasta-Keswick in the lower Sacramento River, there was no winter storm flow (Figure 4). There were only two small managed flow increases of about 1000 cfs for three or four days each (a total of about 15,000 acre-ft), because Shasta held nearly all of its inflow from the two storm periods (Figure 5). Shasta inflow reached over 20,000 cfs for six days in each of the storms (Figure 6). Out of approximately 1,500,000 acre-ft of new storage inflow, Reclamation released only15,000 acre-ft (1%) of storm inflow for salmon.

A spill prescription of just 5% of inflow below Shasta-Keswick in the primary nursery for Winter Run salmon could have provided an increased 3000-4000 cfs of “spill” for seven days, instead of the 1000 cfs increases. Instead of going into the irrigation season at 2.72 million acre-ft, in storage, Shasta would have started at 2.67 million acre-ft. Given the potential benefit of the flow releases, this prescription even for a drought year is more than reasonable.

This example is for the fourth year of drought, when the reservoir began the winter at only 25% of capacity. In wetter years when storage is over 50% capacity, spills of 10% should be considered.

The same circumstances and potential benefits occur below other large Central Valley storage reservoirs, especially Oroville Reservoir on the Feather River and Folsom Reservoir on the American River. Spills of 5% in low storage years and 10% in higher storage years are reasonable prescriptions for their depressed salmon and steelhead populations. 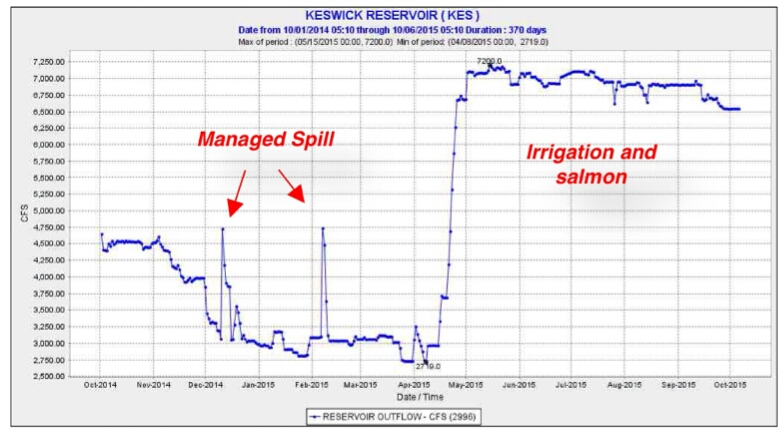 Figure 4. Reservoir releases from Shasta-Keswick in water year 2015. Only two small releases were made in the storm periods. 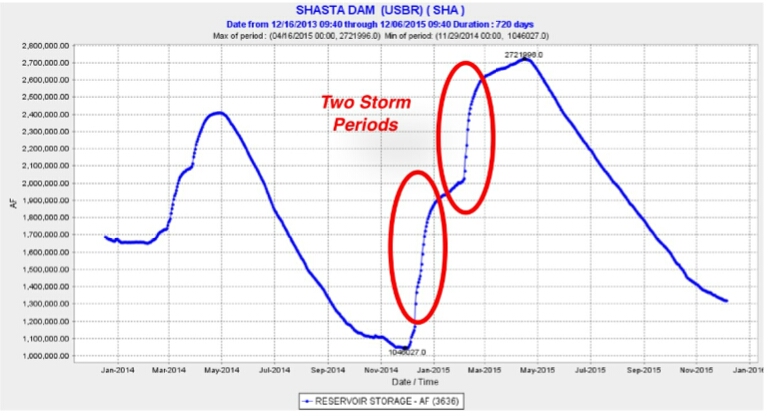 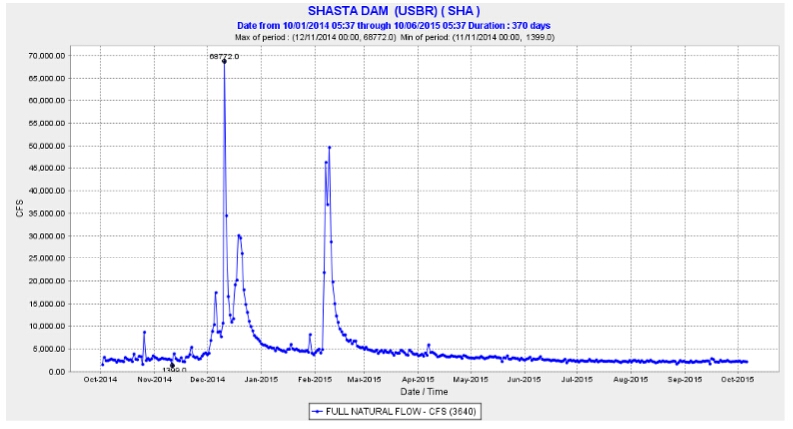