Following an introductory post, this is the fifth post in a series on the lessons learned by the National Marine Fisheries Service (NMFS) from the 2013-2015 drought that devastated Sacramento River salmon populations.  This post addresses NMFS’s Lessons #14 and #15.

NMFS acknowledges that low spring flows may lead to low survival of juvenile spring-run Chinook salmon during their emigration to the sea.  NMFS also suggests that disease may also cause poor survival in dry years.

Some additional observations regarding outmigration are appropriate.  Most wild spring-run fry, fingerling, and pre-smolts emigrate in winter, although spring smolt emigration also occurs.  Another thing to consider is that while disease may be more prevalent in spring of dry years, it may be due to extended rearing in the poor habitat of the upper river in drier years (less food, warmer water, and more stress).  Increased predation by striped bass and other predators under these same habitat conditions is almost certainly another factor.  Lower flows make predators more effective because of lower turbidities, warmer and shallower water, less cover, and slower transport rates.

An overall lesson is that low winter-spring flows lead to higher water temperatures in the lower Sacramento River migration corridor (Figures 2 and 3) and in spawning tributaries (Figure 4), which in turn reduce survival and reproductive success of spring-run salmon.

A related issue at play relates to Lesson 8 (low flows in the lower Sacramento River at the Wilkins Slough gage).  Low spring and summer flows in the lower mainstem Sacramento River flows lead to warmer spring and summer water temperatures.  This in turn leads to higher predation rates on juvenile salmon and poorer adult survival and reproduction success.  Continuing to ignore long-ago established water quality standards for water temperature and operating norms for flow is putting greater stress on all the salmon runs and on sturgeon.  Spring-run salmon are especially vulnerable because both juveniles and adults are present in the lower Sacramento River in spring.

One especially damaging case occurred in early spring 2018.  A series of storms raised flows in the lower Sacramento River by approximately 50,000 cfs, while at the same time there was only a minimum release of about 3000 cfs into the upper Sacramento River from Shasta Dam.  Substantial flows entered the lower Sacramento River from tributaries and from the outfalls of agricultural basins, including the Butte Basin at the Butte Slough Outfall gates.  Some flow even left the river via overflow weirs into the Sutter Bypass. The sudden surge of urban and agricultural basin stormwater, with high oxygen demand, sediment, and chemical loads, led to a series of fish kills of adult spring-run salmon in the lower Sacramento River at the Butte Slough Outfall (Figures 5 and 6).  It is not clear exactly why high concentrations of stormwater may have increased mortality of spring-run salmon in 2018.  What is clear is that low Shasta releases contribute to higher concentrations of stormwater in river flows at key times during their migration.

In conclusion, Reclamation should consider higher spring releases from Shasta in drier years like 2021 to (1) improve juvenile spring-run emigration survival to the Bay-Delta, and (2) improve adult spring-run survival and reproductive success.  Reclamation should also consider spring pulse flow releases from Shasta-Keswick to emulate natural unimpaired lower river spring flows and to enhance migration success.  Such pulses should be timed with lower river tributary flow pulses.  Finally, as discussed in previous posts, Reclamation’s contractors and others must reduce dry-year water diversions in spring from the mainstem Sacramento and its tributaries to further protect spring-run salmon. 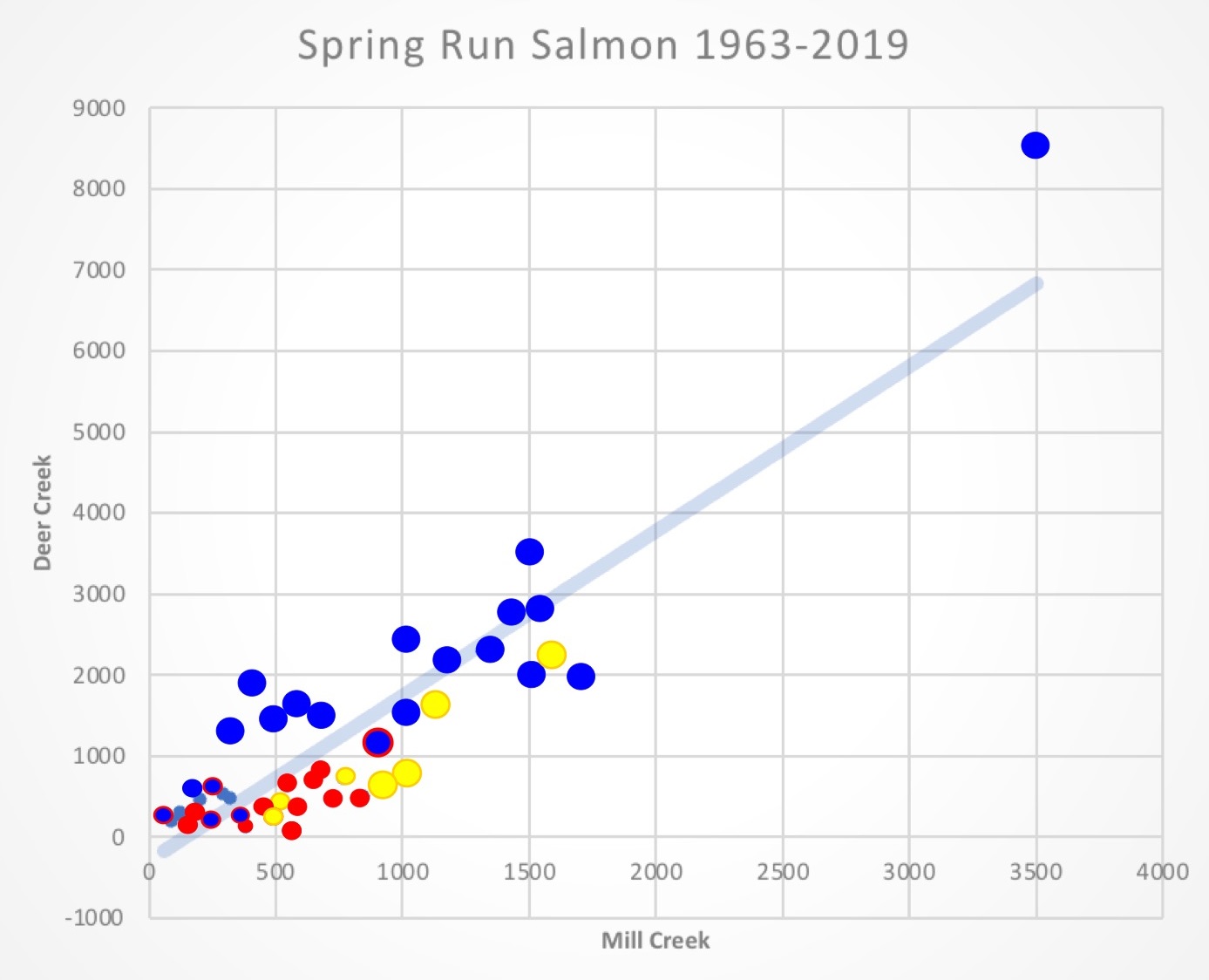 Figure 1. Relationship between Mill and Deer Creek spring run salmon counts 1963-2019. Blue dots represent above-normal and wet years. Yellow dots represent below-normal and dry years. Red dots represent critical dry years. Red margin on blue dots represents a wet and above normal year for adult immigration with a critical dry year two years prior during rearing and emigration. Of special note are the sharply higher run sizes in wet years in Deer Creek, but lower run sizes in Deer Creek in drier years. This shows that production of salmon in Deer Creek suffers proportionally more than in Mill Creek in drier years. In both creeks, salmon runs suffer in years when they are emigrating and immigrating in dry conditions. 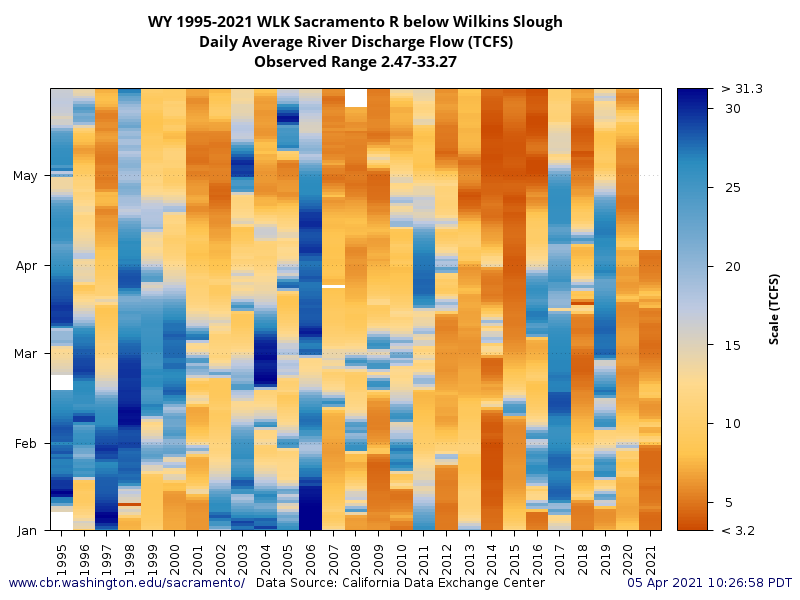 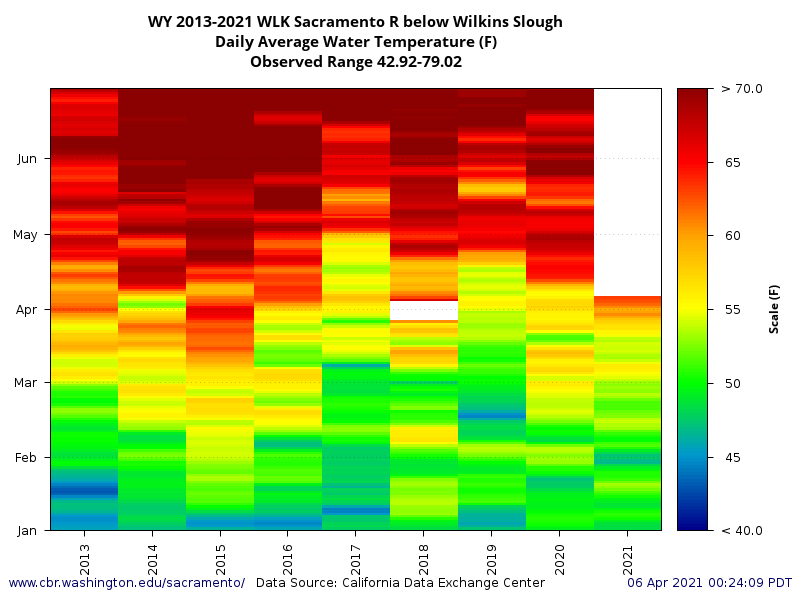 Figure 3. Water temperatures in the lower Sacramento River at Wilkins Slough (below the mouths of Deer and Mill Creeks) in winter-spring from 2013-2021 (only data available). Note the extraordinarily warm water (near or above 70ºF) in early spring of drier 2014, 2015, 2018, and 2020. State standard is 68ºF. Migrating adult salmon suffer stress and mortality at water temperatures above 60ºF. 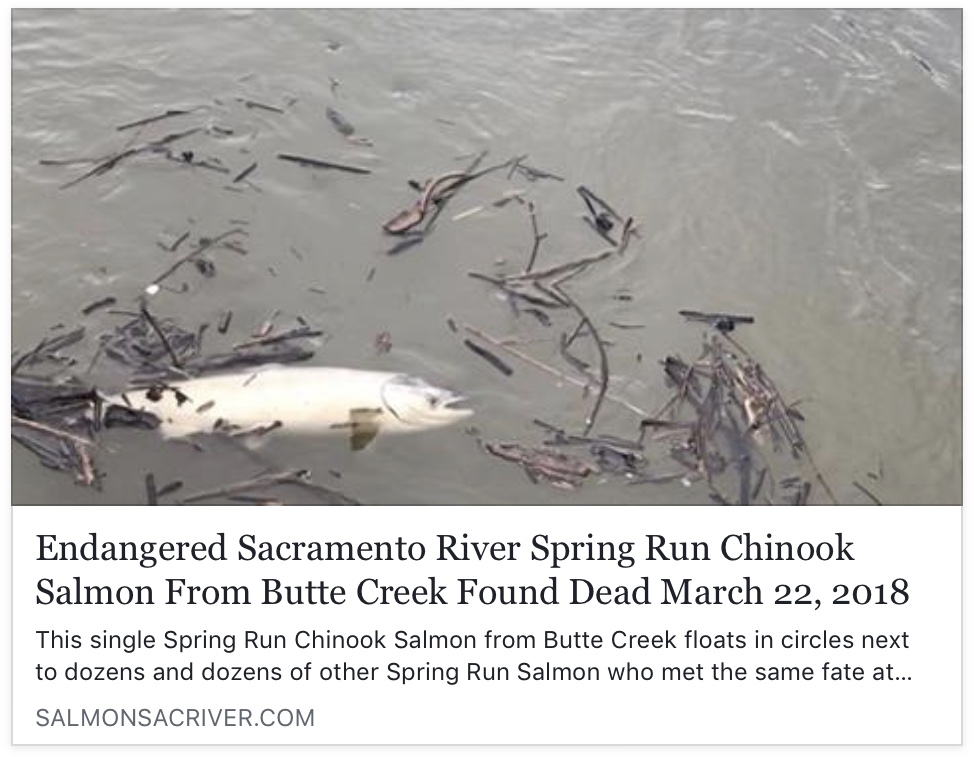 Figure 5. Dead adult spring-run salmon floating at the mouth of Butte Slough Outfall in the Sacramento River in March 2018. Fish likely died from severe stress from low oxygen and heavy suspended sediment and chemical load after being attracted to stormwater flow from outfall gates. 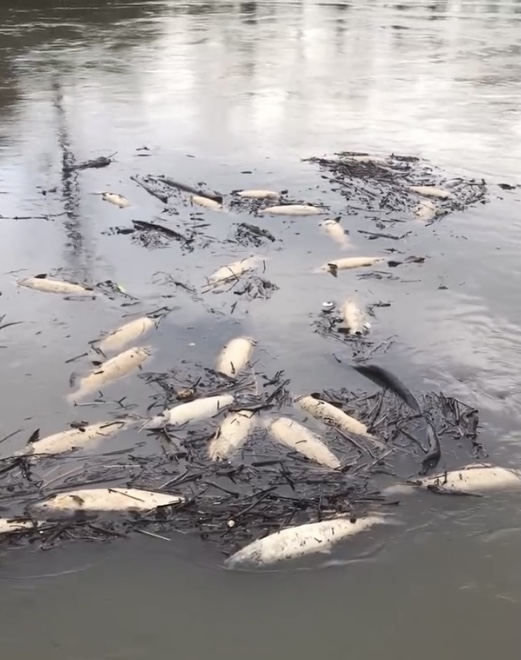 Figure 6. Dead adult spring-run salmon floating at the mouth of Butte Slough Outfall in the Sacramento River in March 2018. Fish likely died from severe stress from low oxygen and heavy suspended sediment and chemical load after being attracted to stormwater flow from outfall gates.
Source: https://youtu.be/t5oB_hWcrzU

Following an introductory post, this is the fourth post in a series on the lessons learned by the National Marine Fisheries Service (NMFS) from the 2013-2015 drought that devastated Sacramento River salmon populations.  This post addresses Lesson #3.

The side gates at the bottom of the Temperature Control Device (TCD) on the inside face of Shasta Dam (Figure 1) allow deeper, colder water in the reservoir to be drawn into the power plant intake penstocks and released to the river below. Use of the side gates allows more colder water to be released for salmon in the river below in summer and fall in years when reservoir levels are low and the cold-water-pool is limited.

In 2014 and 2015, NMFS and the Bureau of Reclamation learned that when the reservoir level is low and the side gates are opened to access cold water, some warmer surface water is also drawn downward into the side gate openings.1 The entrance of some warm water through the side gates compromises temperatures downstream of the dam, thus reducing the effectiveness of the TCD system. Warmer-than-expected release temperatures also limit the ability of Reclamation to meet water demands for downstream contractors when reservoir levels are low. Delaying side gate use with the present structure requires maintaining higher summer storage levels with less summer deliveries.

A comparison of Shasta conditions in mid-August 2014 and mid-August 2015 provides a good example of the problems (Figures 2 and 3). Reclamation used the side gates in August 2014 but not in August 2015. In 2014, Reclamation released more irrigation water in summer, in anticipation of being able to use the side gates (Figure 4). In 2015, lower summer releases conserved storage and cold-water-pool volume, thus delaying use of the side gates. The 2014 operations led to the complete loss of access to the cold-water-pool by October (Figure 5). Water temperatures in 2015 were still too high, but complete loss of control did not occur.

There are other operational changes that may help. Most of the water discharged from the TCD passes through penstocks to powerhouses near the base of Shasta Dam. Those powerhouses are operated based on power demand and prices, not based on temperature management (lower graph of Figure 6). As power demand and power values increase, Reclamation “peaks” the powerhouses to follow these increases. However, the amount of water going through the powerhouses seems to affect the layer of water in Shasta Reservoir that the TCD draws from. and thus the temperature of the dam release water (Figure 6). Low intake rates during non-peak times appear to draw a greater proportion of warmer surface waters from Shasta Reservoir.

In summary, higher storage levels and greater cold-water-pool volume, delayed use of side gates, changing side gate openings, fixing leaks, and possible changes to peaking power operations may be necessary to protect salmon in the Sacramento River below Shasta Dam. 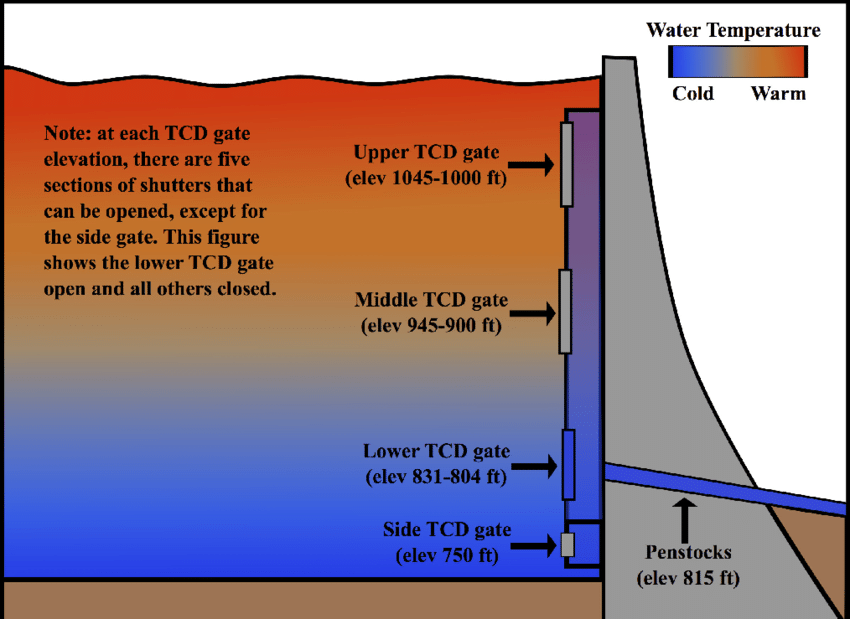 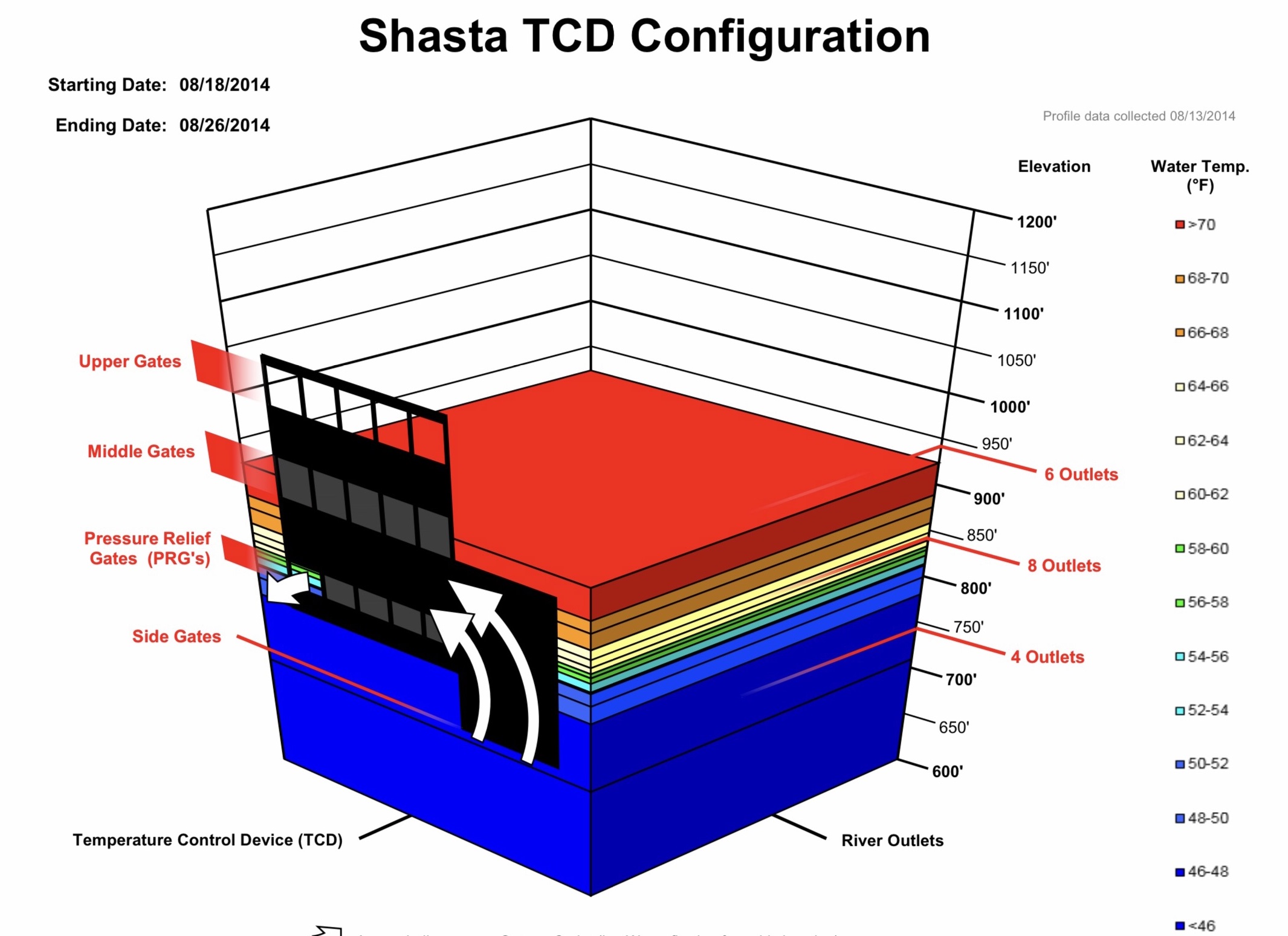 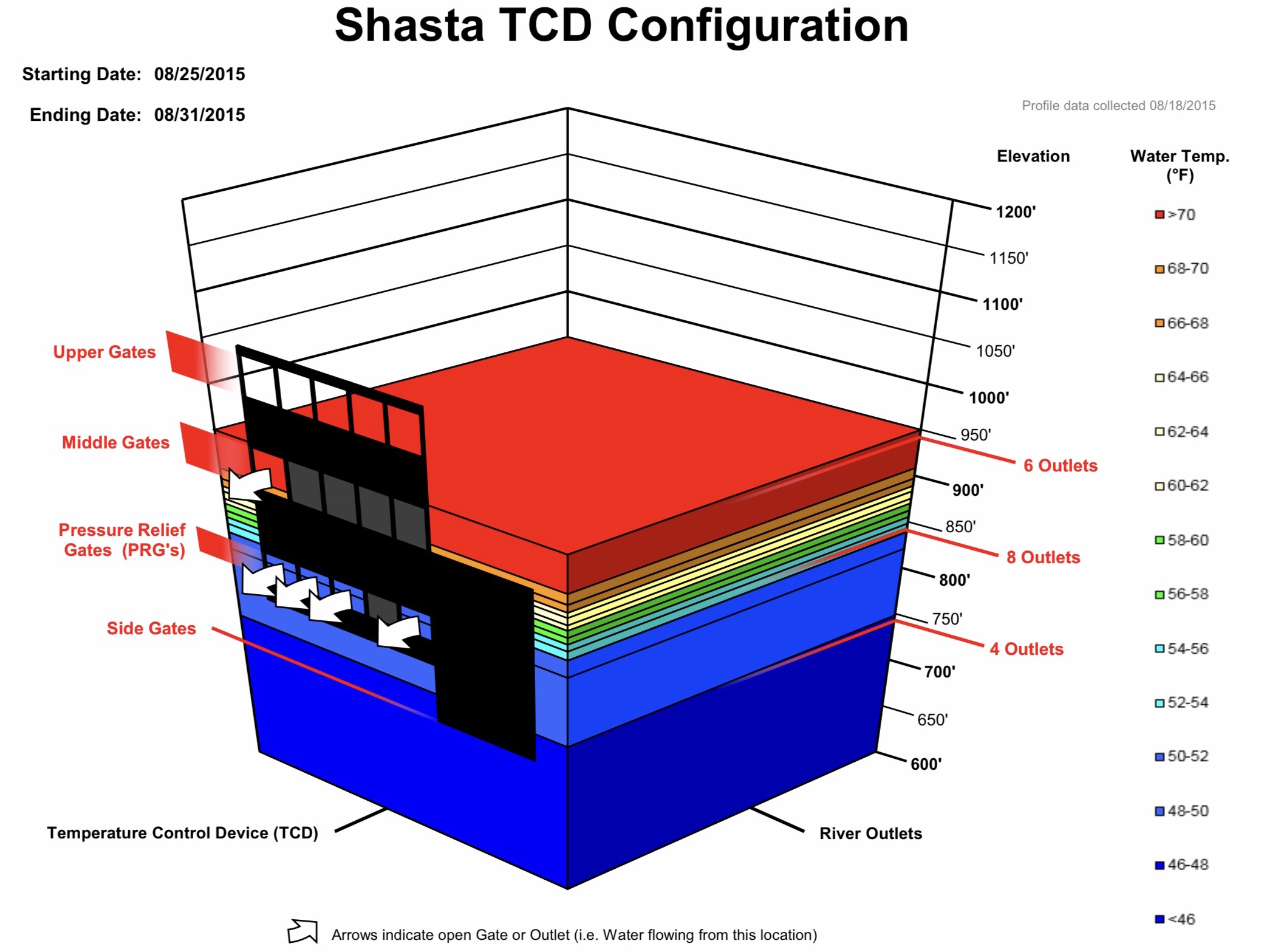 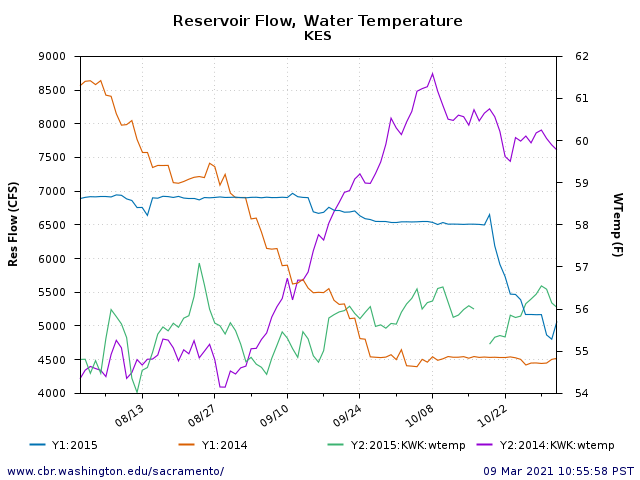 Figure 4. Water temperature and volume of releases to the lower Sacramento River Aug-Oct 2014 and 2015. Note loss of Shasta cold-water-pool access in September 2014. The higher storage releases in August in 2014 compared to 2015 made up much of the storage level differences between 2014 and 2015 shown in figures 2 and 3. 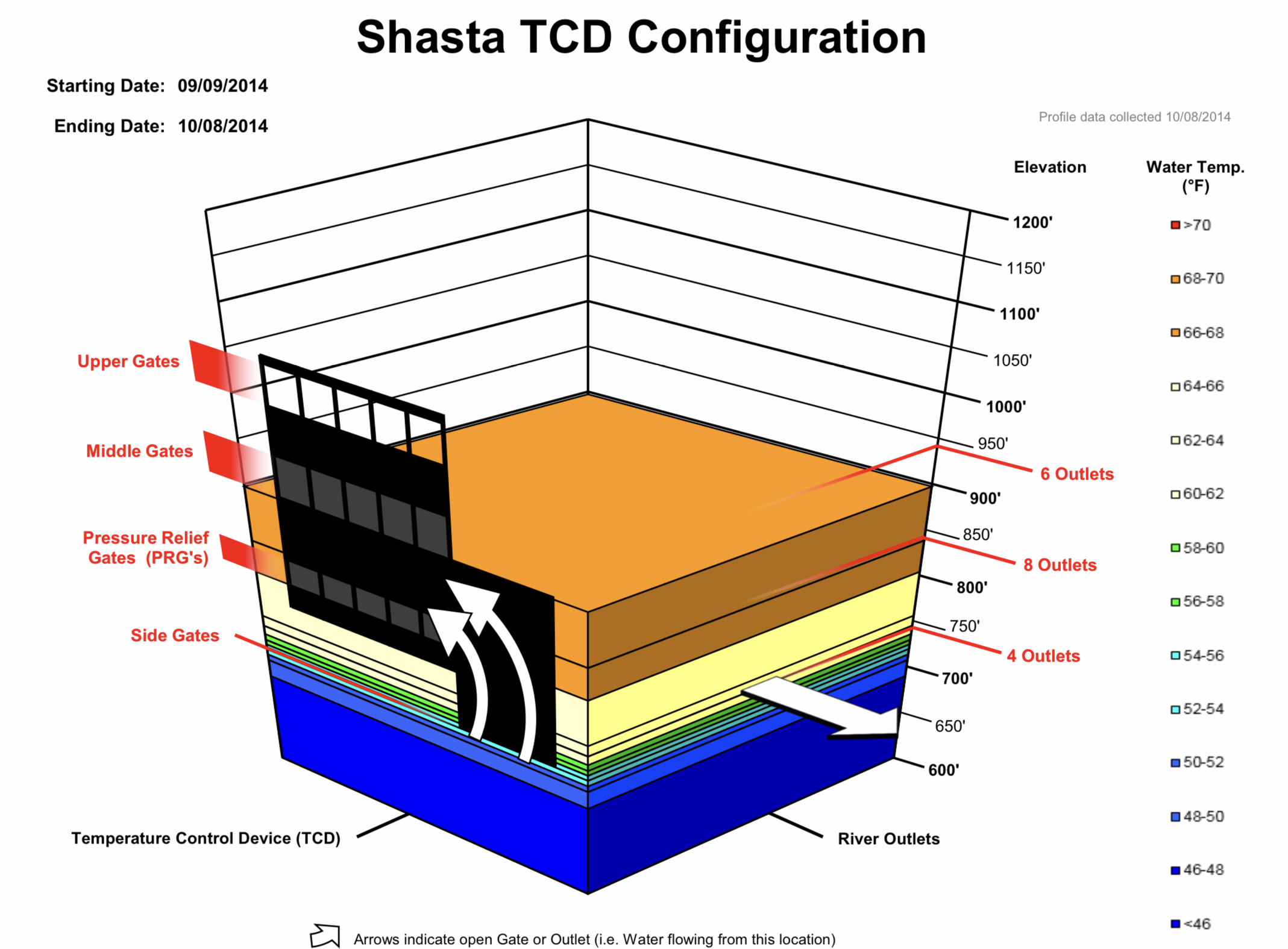 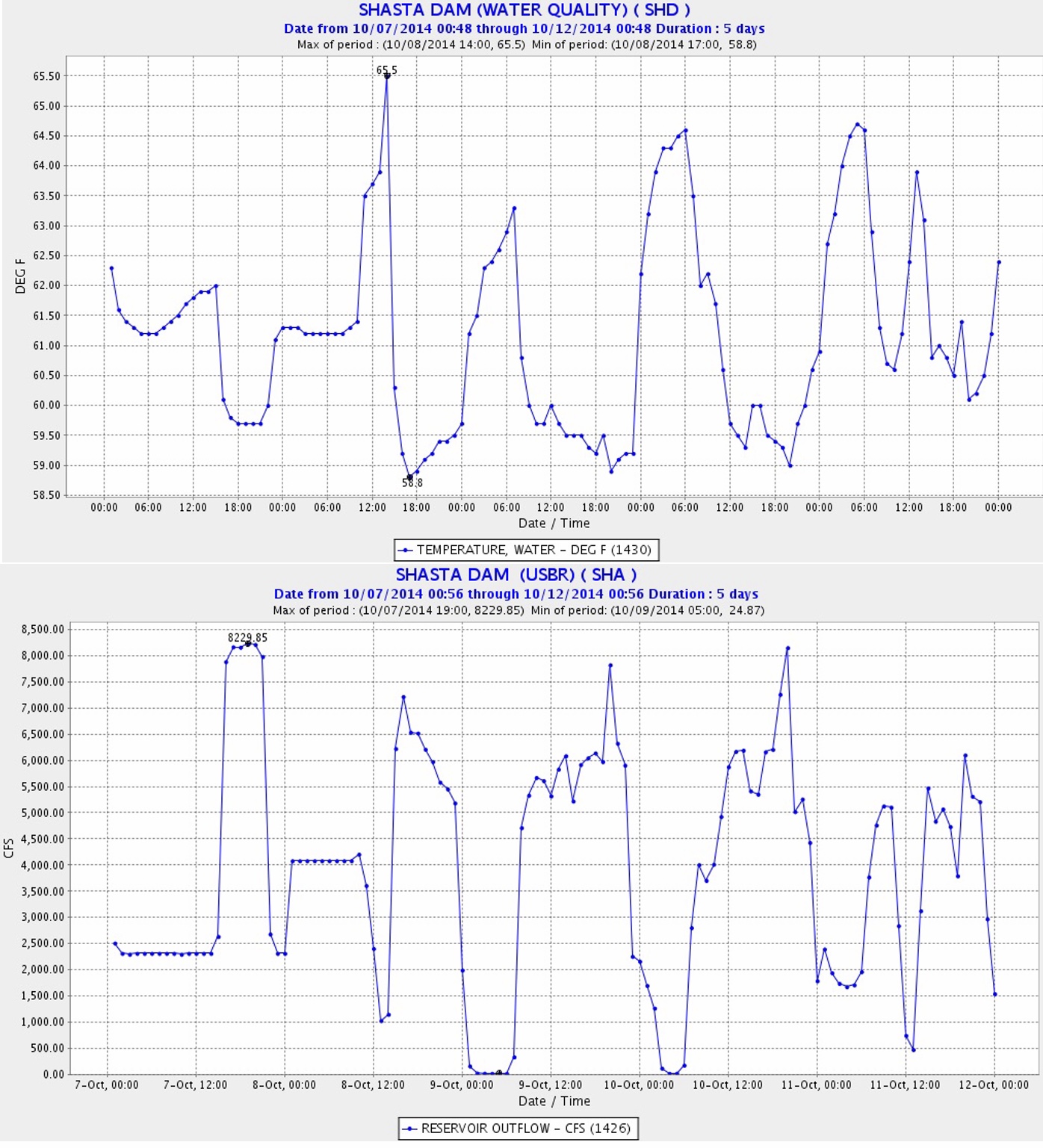