An August 18, 2016 article in the Calaveras Enterprise (“Trout population plummets”) and an August 15, 2016 post on the Fishbio blog describe a recent decline in numbers of trout in the lower Stanislaus River. Fishbio pegged the cause of the problem on to four years of drought and to the fact that the Bureau of Reclamation allowed New Melones Reservoir to fall in storage so far as to lose its cold water pool needed for trout production. As reported in the Enterprise, the Oakdale Irrigation District and South San Joaquin Irrigation District issued a statement arguing that “flawed science” in the National Marine Fisheries Service’s 2009 biological opinion issued for the operation of the Central Valley causes federal dam operators to release water in ways that do not benefit steelhead and trout. The Enterprise quotes the Districts as stating: “The current flow standards are destroying the fisheries that they are intending to protect and doing so at the expense of Central Valley agribusiness and urban interests, who also depend upon a healthy and sustainable river.”

The irrigation districts would prefer that the water released for fish be allocated instead to their constituents. Lost in the discussion is the notion that reducing river flows is not the only way to maintain storage levels in New Melones Reservoir. If the irrigation districts had taken less water over four years of drought, the cold water pool in New Melones could have ended up, in 2015, in much better shape. But the Districts lay the decline of “trout” at the feet of the biological opinion. The fish flow prescriptions biological opinion are not designed for “trout.” They are designed for steelhead migration to the Bay-Delta and ocean. The biological opinion prescribes multi-day spring pulses in flow up to several thousand cubic feet per second to stimulate steelhead (and juvenile salmon) emigration toward the ocean. It states in part:

Objective: To maintain minimum base flows to optimize CV steelhead habitat for all life history stages and to incorporate habitat maintaining geomorphic flows in a flow pattern that will provide migratory cues to smolts and facilitate out-migrant smolt movement on declining limb of pulse. 1

Steelhead need stimulus to migrate. They need the benefits of higher velocities and more turbid water to migrate successfully. Without stimulus, potential steelhead will stay and become resident trout. Mother Nature has given them the inherent knowledge that to go without the flow is to die along the way.

Flow in the Stanislaus River is controlled by operations of New Melones Reservoir (Figure 1). The premise of the article and post is that reservoir drawdown from pulsed flow releases caused the high water temperatures in the lower Stanislaus River that resulted in high trout mortality and the low numbers of trout observed in the snorkel surveys. There is no doubt that low reservoir levels led to warmer water being released into the lower Stanislaus from Goodwin Dam. The information presented in the Fishbio post and report shows clearly that water temperatures were 5 to 10°F higher than normal in the lower Stanislaus, reaching the stressful level of 65°F or even higher downstream of Goodwin Dam at Orange Blossom Bridge (Figure 2). The water temperature criteria prescribed in the biological opinion for the summer at Orange Blossom Bridge is 65°F. The reservoir did fall dangerously low in 2015 (Figure 3). 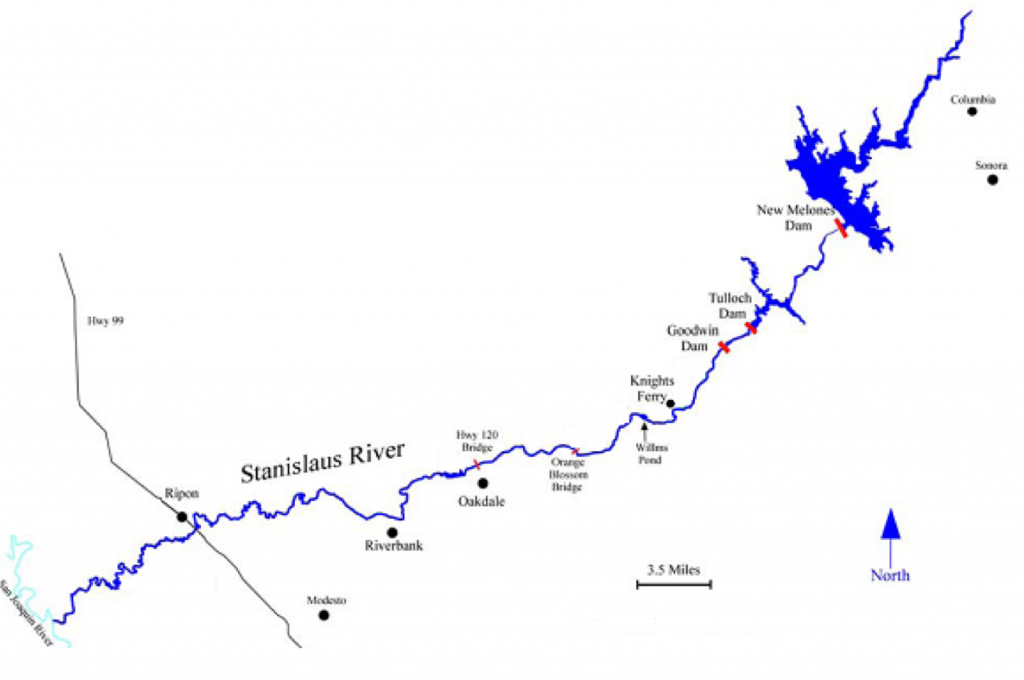 The Fishbio report relates that water temperature becomes a problem when summer storage falls into the 300-500 thousand ac-ft range.  It would also appear that levels of 500-600 thousand acre-feet, such as those that occurred in summer 2014 and 2016, also lead to elevated water temperatures based on a close look at Figures 2 and 3.

A factor not mentioned by Fishbio is that streamflow in the lower Stanislaus in summer 2015 was lower in 2015, 150-200 cfs, compared to 200 cfs or higher in other summers of the 2011-2016 period (Figure 4).  Such lower flows can also contribute to higher water temperatures.  Lower flows can also affect “trout” survival by significantly reducing rearing space and quality.

A factor that Fishbio did mention was a possible “increase in downstream migration.”  After all, the flow pulses were prescribed to stimulate steelhead smolt emigration.  Flow pulses in combination with higher water temperatures may have stimulated outmigration resulting in lower total numbers.

The main theme of the irrigation districts and Fishbio is that by not providing the pulse flows in spring, it would save up to 100 thousand acre-feet of storage, thus keeping the reservoir higher and water temperatures lower in the river below.  But again, what is missing from the discussion is the effect of reservoir operation on the whole process, and especially on storage.  That effect can be seen in Figures 5a and 5b.  The natural flow regime is highly modified.  The natural winter high flows are retained by the reservoir and released in spring and summer.  Releases to irrigators from storage in 2015 over the April – September irrigation season amounted to approximately four hundred thousand acre-feet (see Figure 3), most of which came from storage carried over from previous years, which made up much of the cold water pool.  This repeated the pattern of previous years, when in fact deliveries to the districts were even higher.  With so little water left in storage by 2015, the districts had no one left to take water from but the fish. 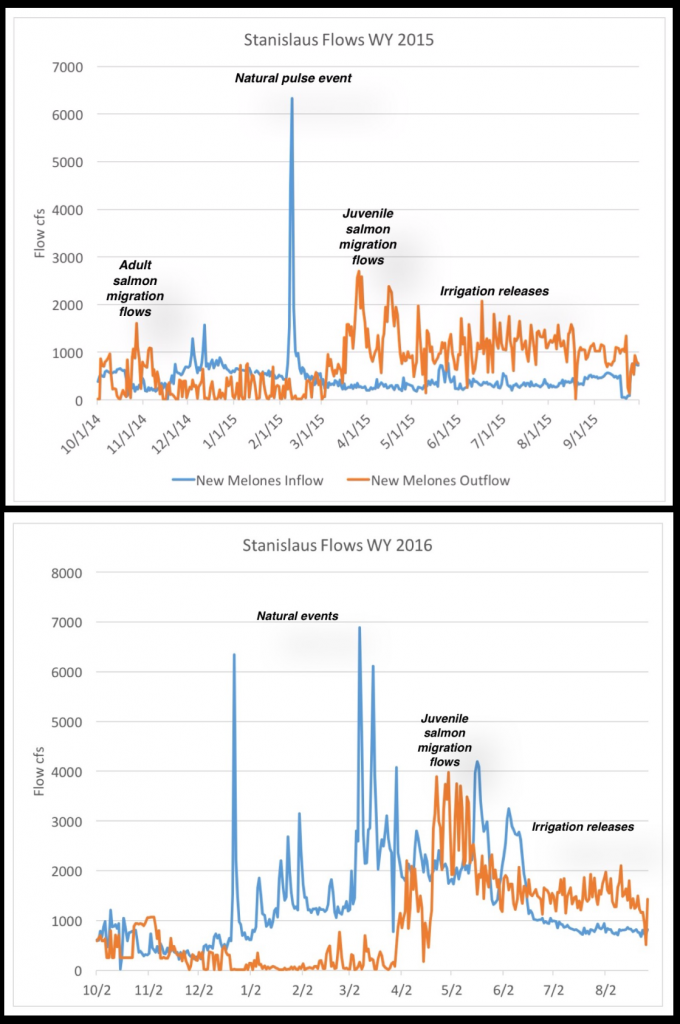