The Northern California Water Association stated on September 14: “For the better part of three decades, greater and greater quantities of water were dedicated to instream flows with the expectation that this “silver bullet” of flows, on its own, would solve the diverse assortment of fish mortality causes. The result, on the rivers and streams where this was the primary or only action used to promote survivability, was generally unproductive.” This statement is so misleading and untrue. It is outright propaganda. Streamflow is absolutely necessary to maintain salmon, steelhead, sturgeon, and smelt throughout the Central Valley, and reductions in streamflow have been directly related to fish mortality and population abundance.

The truth is that each year the state and federal water projects in the Central Valley keep squeezing more and more water from the system. There is no better example than in 2017, a near record water and snowpack year. Even in this very wet water year, water managers are saving water for use in future years rather than applying it as required for the fish. Their excuse is that they must save the water to preserve the cold-water pool in Shasta reservoir for the summer and fall salmon spawn. While that is a true need in drier years, it is not in wet years when Lake Shasta fills.

Water users got full allocations this year. Delta exports reached a near record 6.2 million acre-feet (MAF) of water in Water Year 2017. So instead of keeping river flows up to meet salmon needs with water that users did not need, project managers saved the water for next year’s use. While saving Shasta storage for next year is not a bad thing, saving this year’s fish water for next year’s contractor allocations is certainly not good for fish species near extinction.

How is the fish water saved? The basic approach is to limit Shasta releases and violate fish water temperature standards in the 200-miles of the Sacramento River down to the Delta. The standards require maintaining spring-to-fall water temperature at Red Bluff at 56oF and at 68oF between Red Bluff and the Delta. It takes releases of cold water from Shasta to maintain the Red Bluff standard. In the lower river, it is the flow rate that maintains the standard. With Sacramento River contractors receiving their full allocations and the Delta diverters getting all the water they needed in 2017, there was an overt effort to save the water in Lake Shasta at the expense of the salmon.

The water managers and resource agencies started by moving the Red Bluff 56oF standard compliance point upstream 33 miles to Balls Ferry, leaving over half the upper 60-mile salmon spawning reach without protection. That action is for dry years, not wet years. The combination of lower and warmer Shasta/Keswick releases resulted in excessively high water temperatures near Red Bluff (Figure 1). Lower Shasta releases and lower flows below Red Bluff led to low flows and high water temperatures 120 miles downstream at Wilkins Slough during the summer (Figure 2). By ignoring the water temperature standards, water managersheld approximately 300 thousand acre-feet (TAF) of extra water in storage at Lake Shasta (the amount in yellow area of Figure 2). The standards were also exceeded 40 miles further downstream at Verona (Figure 3); again, the amount that would have been necessary to maintain the standard was about 300 TAF. The effect translated to higher water temperatures 30 miles further downstream in the Delta at Freeport (Figure 4).

Was the 300 TAF of storage saving necessary to preserve Shasta’s cold-water pool to protect salmon in the upper river spawning area over the summer and into the fall? No, and certainly not at the expense of salmon, steelhead, sturgeon, and smelt over the summer in the river, Delta, and Bay. First, there was sufficient cold water to maintain the standards through the summer, regardless what the agencies say or their models predicted. There was 400 TAF more water in the Shasta cold-water pool than in 2016 (Figures 5 and 6). Standards had been maintained in the two previous wet years, 2006 and 2011. Had water managers released the water for fish in 2017, the end-of-September storage would have been 3.1 MAF instead of the projected 3.4 MAF. The 3.1 MAF is adequate and within project goals. It is twice the end-of-September storage of 2015, and 10% higher than 2016. Second, if the 300-TAF was too high a price, some or all of it could have been allocated from the over 8 MAF of water diverted from the Sacramento River and the Delta for water use. Third, if a shortage of the cold-water was a concern, less warm water from the Trinity-Whiskeytown trans-basin diversion could have been delivered to the Sacramento River, or less peaking hydropower generation at Shasta Dam could have occurred: both are known factors in cold-water pool depletion. 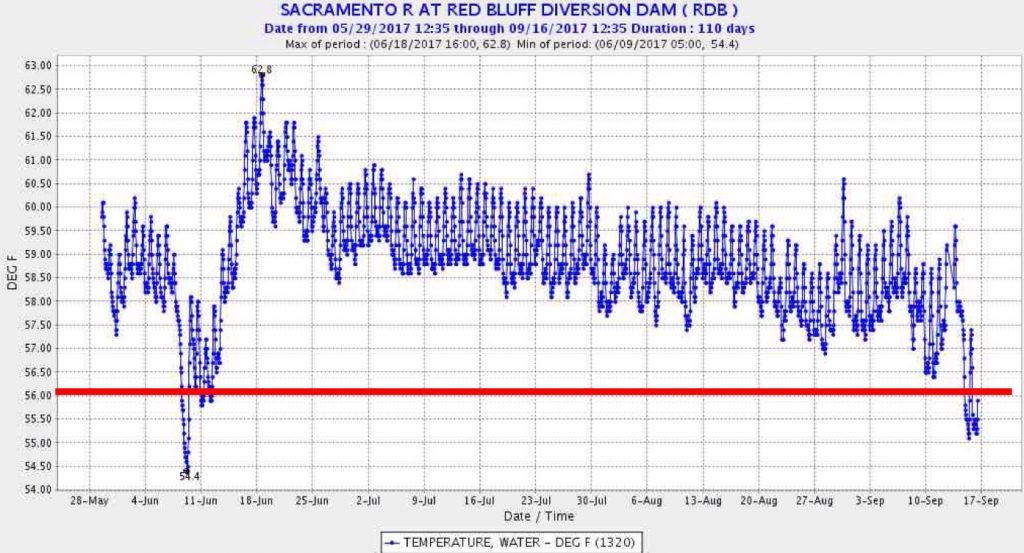 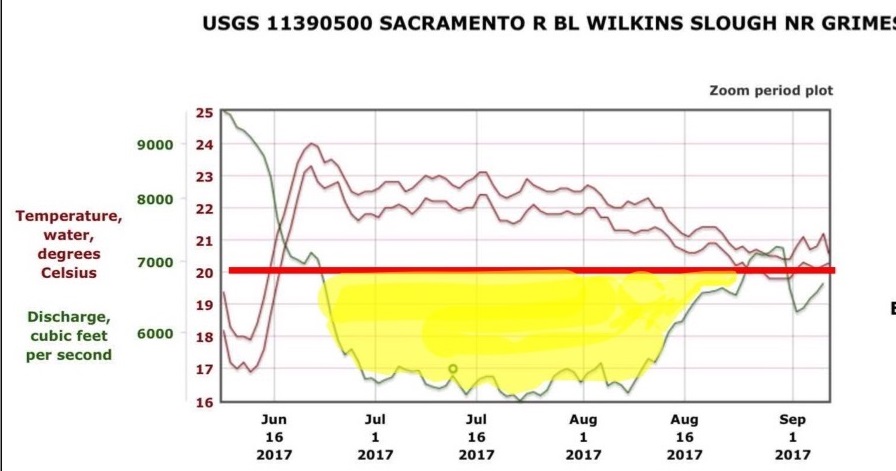 Figure 2. Summer 2017 water temperature at Wilkins Slough (Sacramento River at RM 125). Multiple temperature lines indicate daily highs and lows. Red line is the 20oC (68oF) standard. Yellow area is the roughly 300 TAF that was saved by not meeting the standard (maintaining about 7000 cfs). (Base chart source: USGS) Figure 3. Summer 2017 water temperature at Verona (Sacramento River at RM 80). Multiple temperature lines indicate daily highs and lows. Red line is the 20oC (68oF) standard. Yellow area is the roughly 300 TAF that was saved by not meeting the standard (maintaining about 17,000 cfs). (Base chart source: USGS) 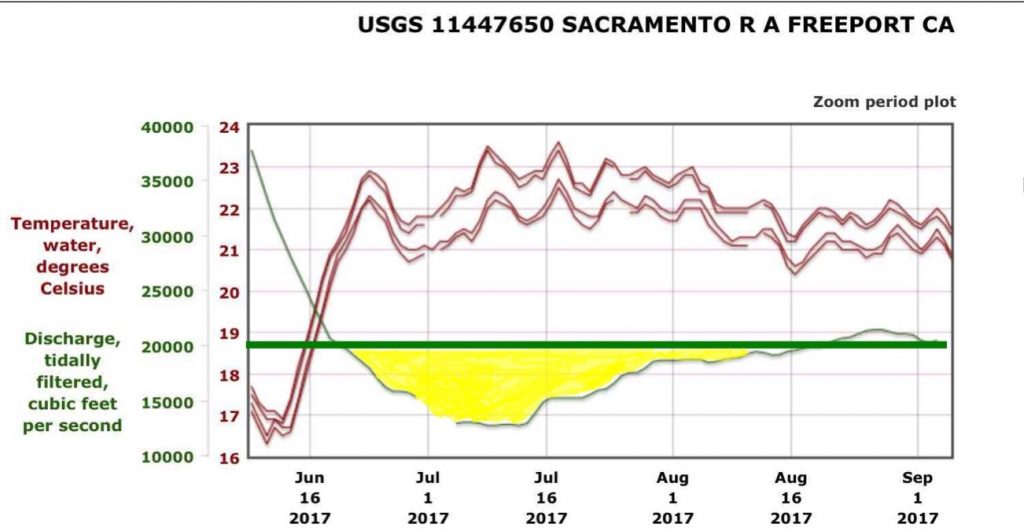 Figure 4. Summer 2017 water temperature at Freeport (Sacramento River channel in north Delta). Multiple temperature lines indicate daily highs and lows. Green line is the flow that would have occurred to maintain upriver water temperature standards. Yellow area is the roughly 300 TAF that was saved by not meeting the standard. Had this water reached the Delta and Bay it would have benefitted Delta smelt by keeping the Delta cooler and maintaining the low salinity zone further downstream in the Bay. (Base chart source: USGS) 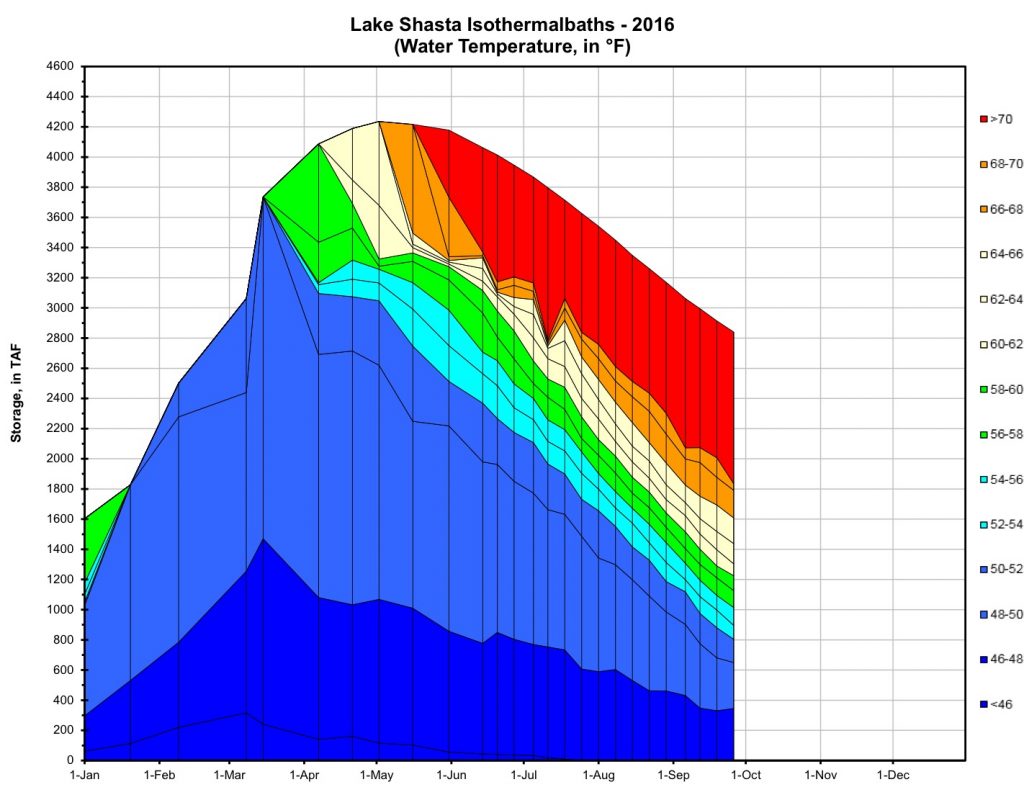 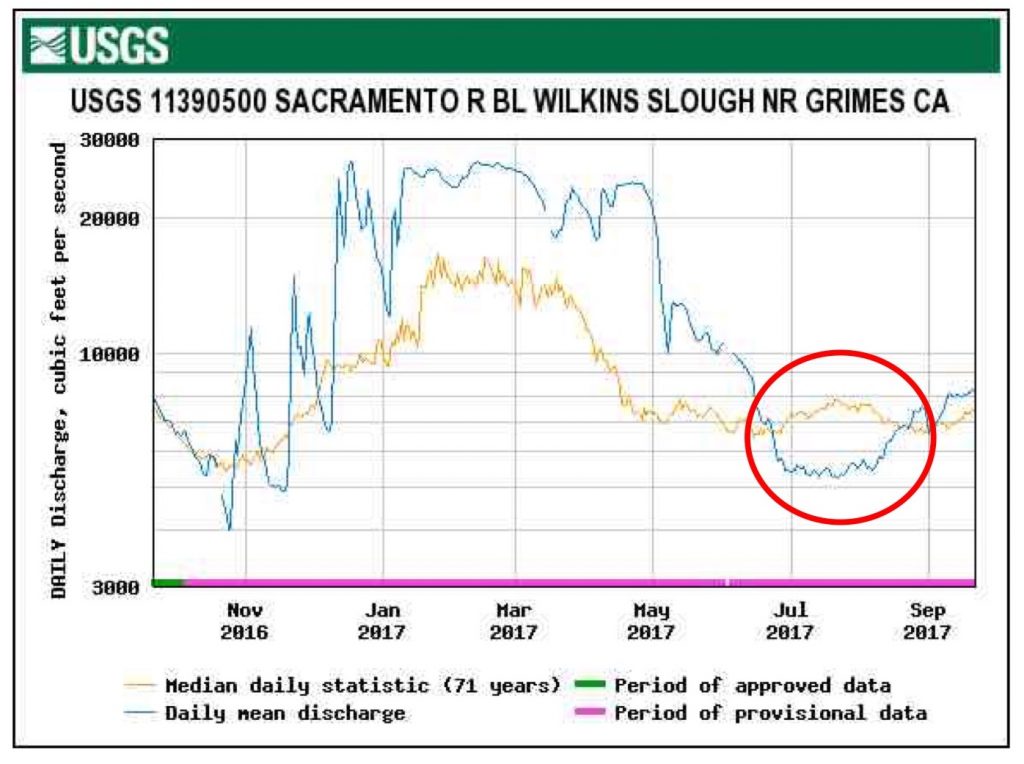 Figure 7. Water Year 2017 flows in the Sacramento River at Wilkins Slough. Near 300 TAF of Shasta storage was saved by reducing flows below the norm in summer (red circle). Base chart source: USGS.