The California Department of Fish and Wildlife (CDFW), in a September 24, 2019 letter from Director Charlton Bonham, asked the US Bureau of Reclamation (Reclamation) to immediately implement “Fall X2” flows. Fall X2 increases Delta outflow from August 15 through October of wetter water years to protect Delta smelt. Fall X2 is a condition in the federal 2008 Smelt Biological Opinion for the Long-term Operation of the Central Valley Project (CVP) and the State Water Project (SWP).

Reclamation had issued a perfunctory Environmental Assessment in August 2019 to purportedly analyze the effects of eliminating Fall X2 in 2019. Reclamation claimed authority to unilaterally rescind the condition because the Biological Opinion has provisions for “adaptive management” of the condition.1 In response to Bonham’s letter, Reclamation, on October 1, backed away from rescinding Fall X2.

Over the past week, X2, the focused location of the 2 parts per thousand (ppt) salinity level in the Bay-Delta, had moved upstream several kilometers from its prescribed km 74 location.2 Salinity increased (Figure 1) because Delta outflow declined (Figure 2). X2 had moved nearly half way to the km 81 location to which Reclamation had proposed to operate in 2019. The lower Delta outflow appeared in part to be in response to reduced releases from Reclamation’s Folsom Reservoir to the lower American River on September 25-26 (Figure 3), which in turn showed up as reduced Delta inflow at Freeport on the Sacramento River below the mouth of the American River (Figure 4). The state increased Oroville Reservoir releases by 2,000 cfs over the past week to make up for falling Shasta releases into the lower Sacramento River.

In response to its decision to implement Fall X2 after all, Reclamation increased flow releases from Folsom Reservoir into the lower American River on September 30, thus keeping Delta inflows as measured at Freeport above 18,500 cfs. The state decreased south Delta exports by 3000 cfs (50%) on 28 and 29 September. X2 is again at km 74. 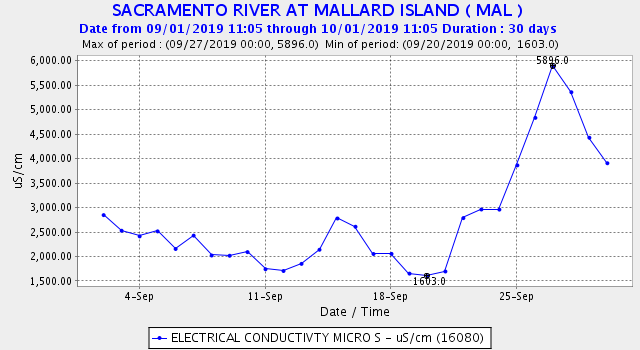 Figure 2. Measured daily average Delta outflow near Pittsburg in Suisun Bay 17-25 September 2019. After low outflows on 25-26 September the subsequent rise through 30 September was in large part due to cessation of monthly spring tides in addition to increased Oroville and Folsom reservoir releases.