Shasta Reservoir is low again at the end of summer in drought year 2021.  The pattern is very similar to critically dry years 2014 and 2015 (Figure 1) that resulted in the loss of access to Shasta’s cold water and failure of the winter-run salmon spawn in the summer.  Year 2021 is leading to another failure of the winter-run salmon spawn and fry production.  Shasta’s cold-water pool supply is depleted, and river releases are too warm (Figure 2).  Water temperatures downstream of Shasta held in 2020 (Figure 2) despite high water releases (Figure 3), because 2020 had 1 million acre-feet more storage at the beginning of the year than either 2014 or 2021 (Figure 1).

One reasonable strategy for Shasta Reservoir’s storage problems is minimum end-of-year storage prescriptions based on initial storage and water year type, and limiting releases in spring after dry years when storage is at or below 2 MAF.  Goals should be set for the next year based on initial conditions end-of-year storage (Figure 1).  As stated in a previous post, it is no longer enough to set end-of-September storage targets.  Climate change means in part that more autumn months are very dry. Exports in the fall (and a transfer season now extended through November) pull down CVP storage or at least slow reservoir refill.  Storage at the end of November or end of December needs to an explicit part of the carryover calculus.  Figure 1 shows end-of-November as the requirement.

In summary, the 2014, 2015, and 2021 salmon production disasters in the upper Sacramento River salmon spawning reach below Shasta Reservoir could have been averted by following simple reasonable criteria for end-of-year minimum storage and stricter criteria for storage releases in spring of drought years.   This presumes, of course, that Reclamation would not have otherwise misused the water thus saved. 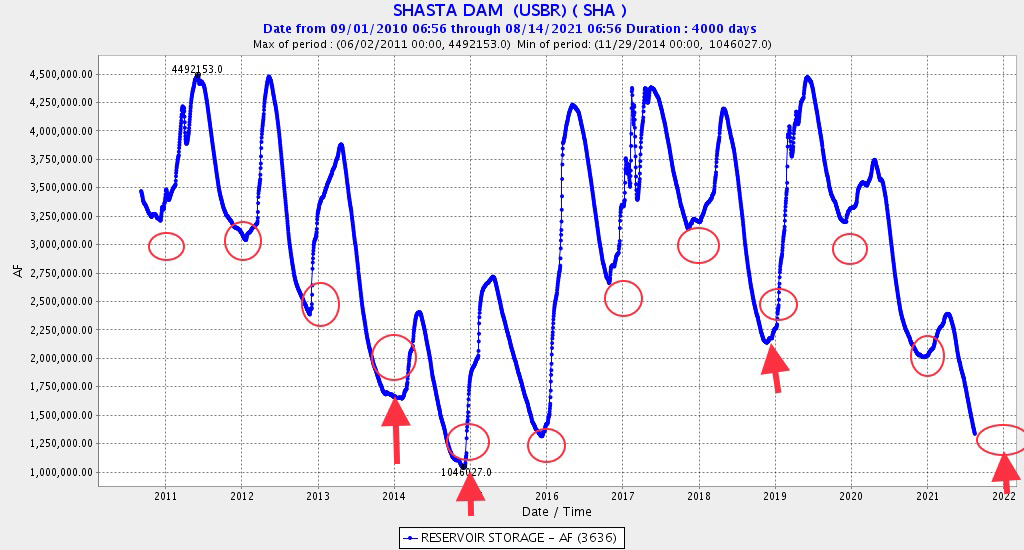 Figure 1. Shasta Reservoir daily-average storage levels in acre-ft, 2014-2021. Red circles are suggested minimum target criteria for those year types. Red arrows are years in hindsight the criteria were not met. 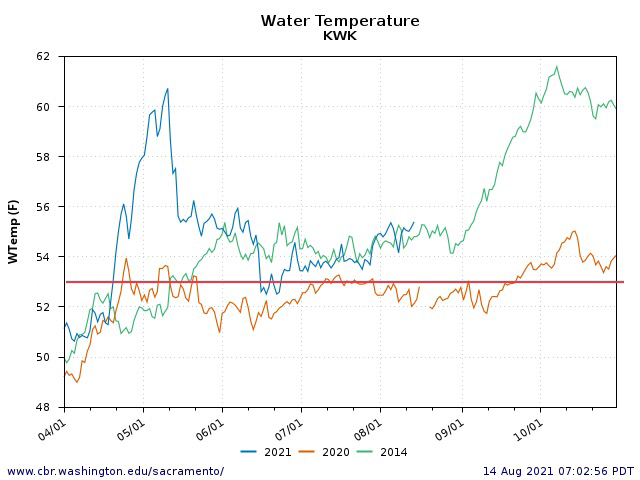 Figure 2. Keswick Reservoir release daily-average water temperature, May-October 2014, 2020, and 2021. Target maximum release temperature for salmon spawning in the 10-mile spawning reach below Keswick is 53oF (red line). Note Reclamation’s 2021 stated plan was to maintain target temperatures only at peak spawning in late June, but not in the early (late Apr-early June) or late (July-August) portions of the spawning period. Note also the lost access to the cold-water pool in September 2014 and October 2020. Access to the cold water is being lost in mid-August 2021. 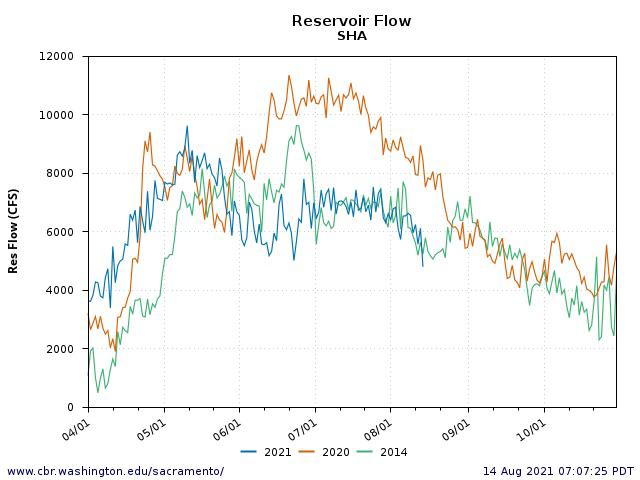