Longfin Smelt are a native Bay-Delta fish and are listed under the California Endangered Species Act as “threatened”. Like the Delta Smelt, Longfin have undergone dramatic declines over the past several decades starting with the 1987-92 drought, then the 2001-2005 dry period, the 2007-09 drought, and the most recent 2012-15 drought (Figure 1). A strong recovery occurred in the wet years of 1995-2000. Modest recoveries occurred in 2006 and 2011 (wet years).

The Winter Kodiak Trawl Survey of adult Longfin Smelt provides the first clue as to how the population is faring in the 2015 drought after the second lowest fall index on record. The number of adult Longfin captured in the three winter surveys (Jan-Mar) are low but not unlike other low abundance years in the past decade (Figure 2).

Another indicator is results of the Smelt Larval Survey. The abundance and distribution of larvae in the Bay-Delta is representative of spawning success and potential of this year’s production to contribute to the population. So far in March 2015, survey capture densities have been generally below 100 per 1000 cubic meter sampled (Figures 3 and 4). These densities were slightly lower than for the same surveys in 2014 (Figures 5 and 6). Much higher densities occurred in years 2009-2013 (not shown).

The Juvenile or 20-MM Smelt Survey is another indicator of how Longfin Smelt are faring. Its first survey was recently completed (Figure 7), and the densities are again down from 2014 (Figure 8). Densities in 2014 and 2015 are again significantly lower than in surveys over the previous decade (not shown).

Based on these trends, we can expect another poor recruitment year, perhaps even a record low Fall Index. The population was able to rebound after low Fall indices in 1992 and 2007. It remains to be seen whether the population can rebound after declining since 2006 and after record low numbers of larvae and juveniles in 2014 and 2015. As in 2014, water quality standards for Delta outflow and exports, as well as salinity, have been relaxed, which will further stress the population toward possible extinction. This “canary in the coal mine” for the San Francisco Bay-Delta Estuary, like the Delta Smelt, remains on “life support”.

We will keep you posted as to how the year progresses for Longfin Smelt. To keep up to date on upcoming surveys, check out CDFW’s web site. (https://www.dfg.ca.gov/delta/data/) 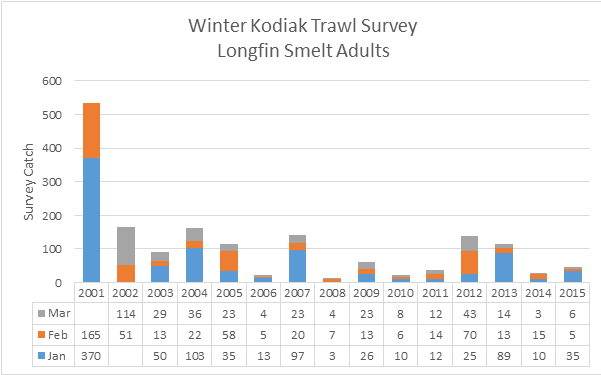 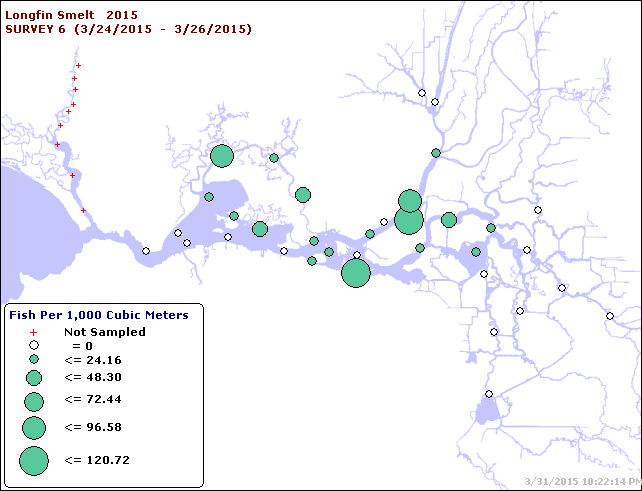 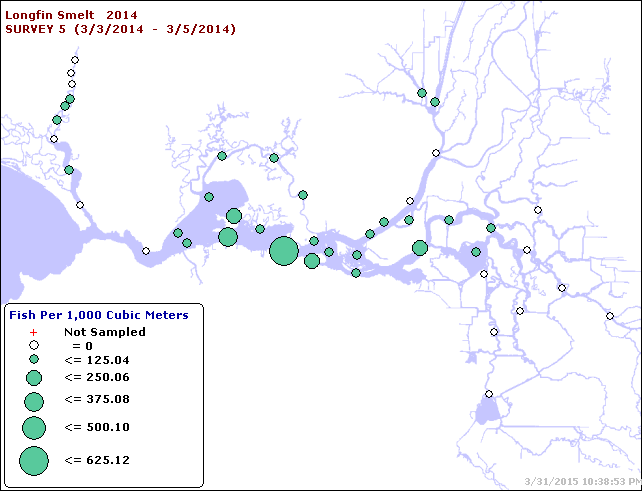 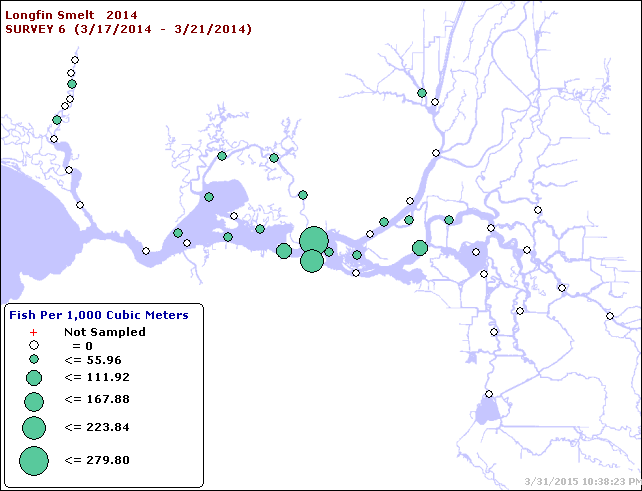