A recent article in the LA Times asked: can rice fields help endangered salmon in the Central Valley? Because that article really did not answer the question, I thought I would try in this post. The answer is: absolutely.

A significant portion of the endangered winter-run and spring-run salmon populations are now made up of hatchery fish. Hatchery fish are important in keeping the populations from falling further toward extinction and in helping toward recovery. To make the hatchery tool in the tool-box of recovery more effective, it is essential that a greater percentage of hatchery eggs become smolts that reach the ocean. Studies show that hatchery smolts released at or near hatcheries have a very poor survival rate to the Golden Gate. Trucking the hatchery smolts to the Bay increases survival, but results in significant straying to other Valley rivers. 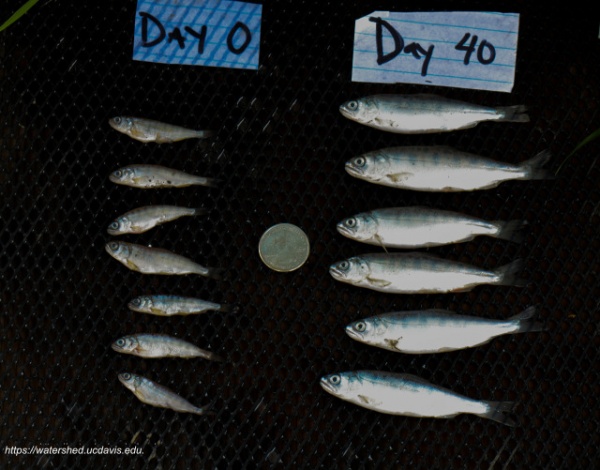 One way to increase smolt production and survival is to rear a portion of the newly hatched fry in Valley floodplain rice fields closer to the Bay. There have been plenty of experiments that show fall-run hatchery fry do well in terms of growth and survival in rice fields. The next step is putting that knowledge into management action. At a minimum, rearing a portion of newly hatched fry from hatcheries in natural floodplains is more “natural” than rearing them in hatchery raceways.

Winter-Run Salmon: Winter-run fry from the Livingston Stone federal hatchery could rear in the rice fields of the upper Yolo Bypass during late fall and early winter. Conditions would be ideal for growth and survival. Even in drought years, water would be available from the Colusa Basin Drain, whose water source is primarily the upper Sacramento River. As proven last year, managers could explicitly divert water for this purpose from near Red Bluff on the Sacramento River, through the Colusa Basin to the upper Yolo Bypass rice fields, and finally to the Tule Canal. This would facilitate emigration of the smolts produced to the Bay. The planned Fremont Weir “fix” will provide Sacramento River water directly to the Yolo Bypass within several years. The alteration of Fremont Weir will also provide passage back to the Sacramento River for any adult winter-run that are attracted to Yolo Bypass flows.

Spring-Run Salmon: Spring-run fry from the Feather River state hatchery could rear in rice fields in the lower Sutter Bypass adjacent to the lower Feather River. Rearing would occur in winter, when conditions would be ideal. A late winter flow pulse could facilitate the emigration of these fish (as well as wild fish) out of the Feather River to and through the Delta, and to the Bay and ocean.