In a July 25 post, I wrote of an “unprecedented experiment” that released additional Delta outflow. I wrote that the pulse of Delta outflow in mid-July was in response to the state’s new Delta Smelt Resiliency Strategy July 2016.  Well, while the outcome of increased outflow did indeed create a valuable experiment in regard to smelt, the motivation for the release was simply to allow the water projects to be in compliance with State water quality standards for the Delta.  In this Below Normal water year, the required salinity (EC) at Jersey Point in the west Delta must be maintained below 740 EC on a 14-day average.  As the average EC crept up in mid-July (Figure 1), the water projects increased outflow (by limiting exports) beginning on July 16 (Figure 2).

In a July 14 post, I had recommended 9000 cfs Delta outflow for July to keep smelt and the Low Salinity Zone west of the Delta.  If the projects had in fact maintained July outflow at 9000 cfs, the standard would have been met and the smelt and their habitat would have been better off for it.  A 9000 cfs outflow from July 1-15 would have cost 60,000 AF of water, roughly the cost of the one week of extra water necessary to comply with the standard (the monthly average outflow for July was 8400 cfs).  There was significant daily variation in outflow (Figure 2) that caused significant salt penetration into the Delta (Figure 3) with spring tides (Figure 4).

Perhaps better control of Delta outflow and salt field on a daily basis would benefit Irrigators (the standard is for agriculture) and reduce effects on fish and their habitat.  It also appears that project operators also used more water than was necessary to maintain a consistent 740 EC standard.  The extra water could be credited to the Strategy for helping smelt.

As it turned out, the event did provide an “unprecedented” adaptive management experiment whose effects bear close examination.  If anything, the “experiment” shows that large amounts of water manipulation in the Delta can be accomplished on short notice for whatever purpose.  I regret giving credit to the state and federal water projects for attempting to address the new Delta Smelt Strategy, when no such credit was in fact deserved.  Perhaps in the future the projects will actually seek credit for managing for Delta smelt, if only for that extra increment of water that assures compliance with water quality standards. 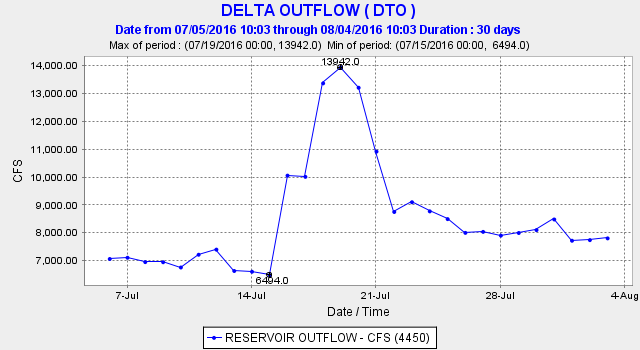 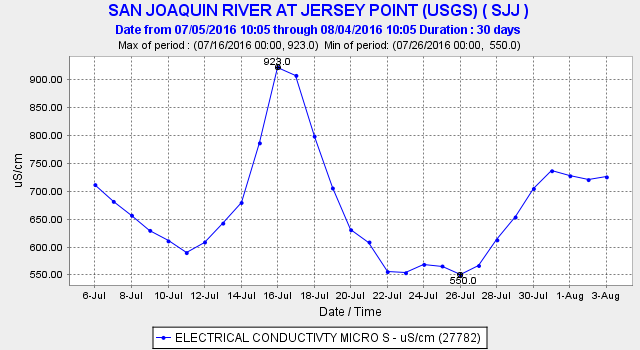