In a September post I opined about the state of the American River salmon and steelhead.  I am more inclined now to scream.  This beautiful river running through the state’s capital city, Sacramento, one of the Central Valley’s top three producers of salmon and steelhead, is now the most abused.  Water temperatures and flows have reached critical limits  because of high summer releases from Folsom Reservoir, leaving this year’s salmon run in the lower American River in jeopardy.

After nearly filling this past spring, Folsom Reservoir was drained of an unprecedented 550,000 acre-ft of water (and most of its cold-water pool) over the summer (Figure 1) in support of cities and farms in central and southern California.  Fall flows from Folsom Lake to the 20 miles of the lower American River have been cut to drought levels (Figure 2) to conserve what minimal storage is left and to have some cool water for late fall salmon spawning.

The lower American River is now host to tens of thousands of adult Chinook salmon that have migrated into the river to spawn.  These salmon are now “holding” for their eggs to mature and for water temperature to fall below 60°F so that their spawned eggs can survive.  Scientific research has led the National Marine Fisheries Service, the Environmental Protection Agency, the California Department of Fish and Wildlife, and the State Water Resources Control Board to recommend “holding” water temperature be less than 60°F to ensure the health of the holding, pre-spawn salmon and the viability of their eggs.

At a time when nearly all the Central Valley spawning rivers are near 60°F or below, the lower American remains warmer (Figure 3), with daily average water temperatures of 65°F.

While fishing the lower American River on October 12, an adult female salmon swam up to me “gasping” for air.  Other than a raw lamprey scar, she appeared healthy.  I tried to revive her by holding her steady in a slight current, but she eventually died.  It took less than an hour for the carcass to be covered by silt and become unrecognizable.  I wondered how many more like her were on the bottom of the river.

I can only assume that fisheries agencies are desperately trying to manage the river to save as many salmon as possible given the warm, low water levels in Folsom Lake and the limited options that now remain available to them.  The main problem is this past summer’s draining of Folsom’s cold-water pool.  In future years, the Bureau of Reclamation and the fisheries agencies need to fully implement the requirements of the CVP/SWP biological opinions  as copied verbatim in my September post, linked above. Figure 2. Flows from Folsom Lake to lower American River in 2016. Note the average of about 5000 cfs per day (10,000 acre-ft per day) released from early May to mid-August (roughly 1 million acre-ft from storage and reservoir inflow). 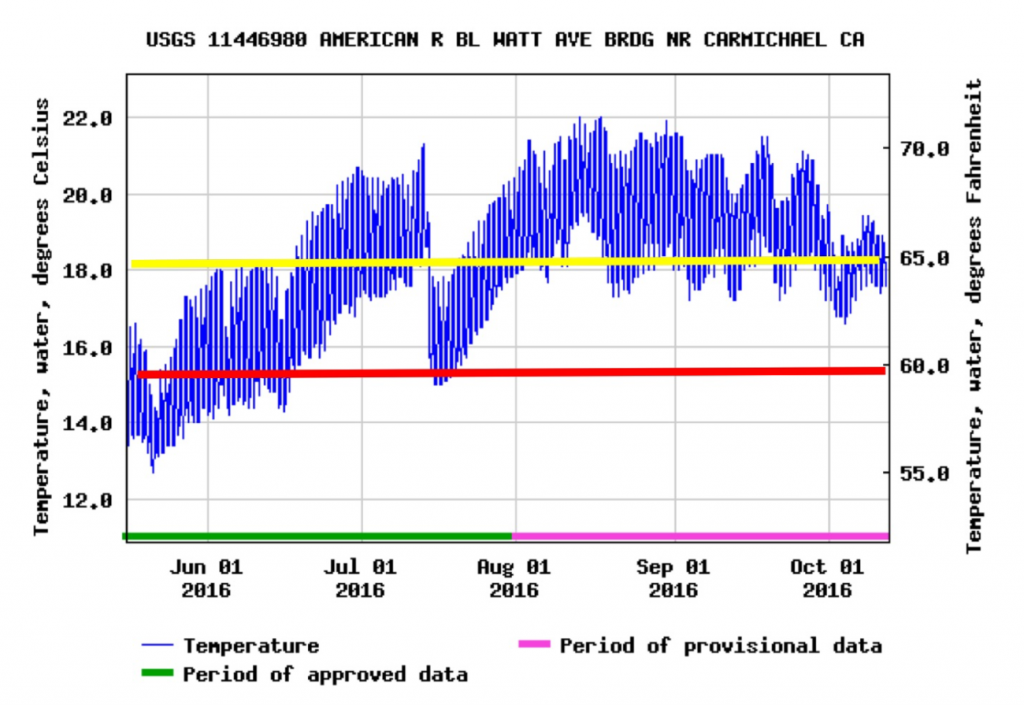