The Smelt Working Group (SWG) again this week recommended major cutbacks in Delta exports (about a 75% cutback)1 to protect Delta smelt adults that entered the Delta this past month on their annual pre-spawning migration from the Bay. Managers from the US Fish and Wildlife Service (FWS), in taking formal action on the recommendation as they did in the prior week, did not adopt the recommendation. Instead FWS managers maintained a less restrictive regime that allows exports of at least 50% of capacity (5,600 cfs).2 A conflict arises in these circumstances because high Delta inflows from recent storms could be exported at maximum rates (11,200 cfs) to south-of-Delta storage (e.g., San Luis Reservoir) if the restrictions in the Delta Smelt Biological Opinion are not applied. In recent days, Reclamation and CDWR have kept Old and Middle River reverse flows (OMR) at about -6500 cfs (Figure 1) by holding exports at 7000 cfs, but they contemplate increasing exports “if conditions continue to settle following last week’s storm”. The reference to “settle” refers to an expected reduction in Delta turbidity, which has been related to the export entrainment risk to Delta smelt.

The “conflict” arises between what the SWG is recommending for 14 days – exports of about 2500 cfs – and what the FWS managers will allow (some amount greater than 7000 cfs). The FWS “does not believe that Action 1 is currently necessary in response to last week’s storm,” whereas the SWG believes action is needed based on the presence of adult smelt as far upstream as Prisoners Point in the San Joaquin channel. The SWG includes FWS smelt experts. The FWS, Reclamation, and DWR managers coordinate on the FWS’s “formal action”.

While the holidays will restrict SWG and FWS actions in the next two weeks, some monitoring will continue that could indicate the need for changes in Delta operations during this period. Of chief concern is potential salvage of smelt at the south Delta export facilities. Of note this week is sharply increased salvage of late fall/winter run salmon smolts from the Sacramento River. 3 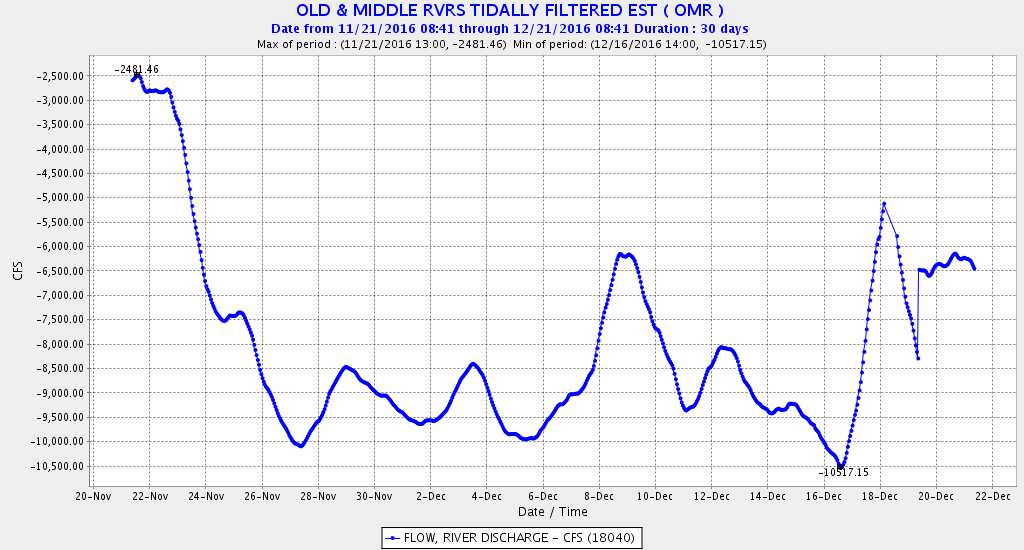