Late-fall-run Chinook salmon are unique to the Sacramento River. They migrate upstream to spawn below Shasta Reservoir in the Sacramento River in the late fall and early winter. Peak spawning is in the winter months. With emergence in the spring months, juveniles over-summer in the upper river above and below Red Bluff before commencing their smolt migration toward the ocean in the fall, when the lower river cools.

Numbers (escapement) of adults reaching the upper river spawning grounds have been estimated at the Red Bluff Diversion Dam (RBDD) fish ladders, in redd surveys, and in carcass surveys. The counts were accurate until 1991. Beginning in 1992 the RBDD gates were lifted in fall and winter, and ladder counts ceased. Accurate counts were obtained through other methods (aerial surveys, redd counts, and carcass surveys) beginning in 1998. A plot of escapement from CDFW’s GrandTab file (Figure 1) also shows the contribution of the Coleman hatchery returns in the escapement total. The inaccurate escapement estimates from the 1992-1993 fall/winter to the 1996-1997 fall/winter show clearly in Figure 1.

Keeping the accuracy of the counts (escapement estimates) in mind, I plotted recruits vs spawners (escapement vs escapement three years earlier) using the GrandTab totals for all years except 1992-1999, the years affected by the inaccurate estimates from 1992 to 1996. Figure 2 depicts the spawner recruit relationship with year labelled being the first rearing year (freshwater phase) for the recruits. A positive relationship between spawners and recruits is depicted with higher recruits per spawner in wetter rearing years. Wetter years generally have the following survival attributes:

Recruitment has been consistently low in recent drought years, which lacked the positive benefits I listed above. Removal of the RBDD gates after 1992, screening of large diversions, and more protective habitat conditions (flows and water temperatures) likely contributed to the population resurgence in the wetter year periods from 1995-2006. However, the droughts years from 2007-2015 have driven the population to such a low level that the run is now primarily sustained by hatchery production.

A recent assessment by CDFW1 recognizes the roles of these stressors on the late–fall-run salmon population. I quote from the assessment and comment below.

The effects of RBDD were more subtle. This dam apparently delayed passage to upstream spawning areas and also concentrated predators, increasing mortality on out- migrating smolts. Kope and Botsford (1990) documented that the overall decline of Sacramento River salmon was closely tied to the construction of RBDD. Raising the dam’s gates for much of the year to allow salmon passage apparently alleviated much of this problem. The gates are now open year-round, allowing uninhibited passage of adult and juvenile late fall-run Chinook salmon.

Comment: Eliminating the RBDD migration blockage and predator hotspot was important, but it also allowed predator access to the upper river in the spring-fall rearing period. The numbers of river spawners has continued to decline while the proportion of hatchery returns increases.

“Fish from Coleman National Fish Hatchery on Battle Creek are contributing at a low rate to the spawning population in the mainstem Sacramento River.”

Comment: The rate is no longer considered low. The population’s viability is in question with the large contribution by the hatchery.

Comment: Wild and hatchery-released smolts move downstream toward the Delta with the first fall rains (Figure 3). Those that reach the Delta before the end of December are subject to an open Delta Cross Channel and high exports (Figure 4), and high rates of predation, which together likely contribute to the very low return rate of the late fall hatchery and wild smolts, especially from drier years.

Hatcheries. Late fall-run Chinook salmon have been reared at Coleman National Fish Hatchery on Battle Creek since the 1950s, even though the run was not formally recognized until 1973 (Williams 2006). The current production goal is one million smolts per year, which are released into Battle Creek from November through January (Williams 2006). Hatchery broodstock selection for late fall-run fish includes both fish returning to Coleman National Fish Hatchery and those trapped below Keswick Dam. Large numbers are needed because survival rates are low (0.78% at Coleman).

A wide array of actions have been prescribed for Central Valley listed winter-run and spring-run salmon and steelhead in recovery plans and biological opinions that will also benefit late fall salmon. Actions include improving spawning and rearing habitats, as well as river flows and water quality. Among these are a specific set of actions that would contribute most to the late-fall-run recovery: 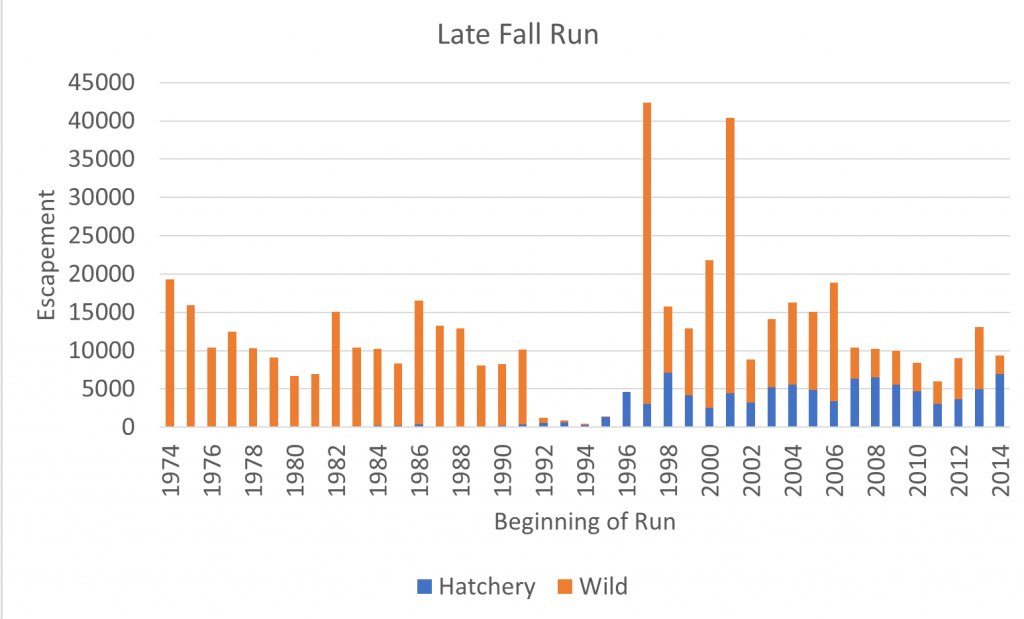 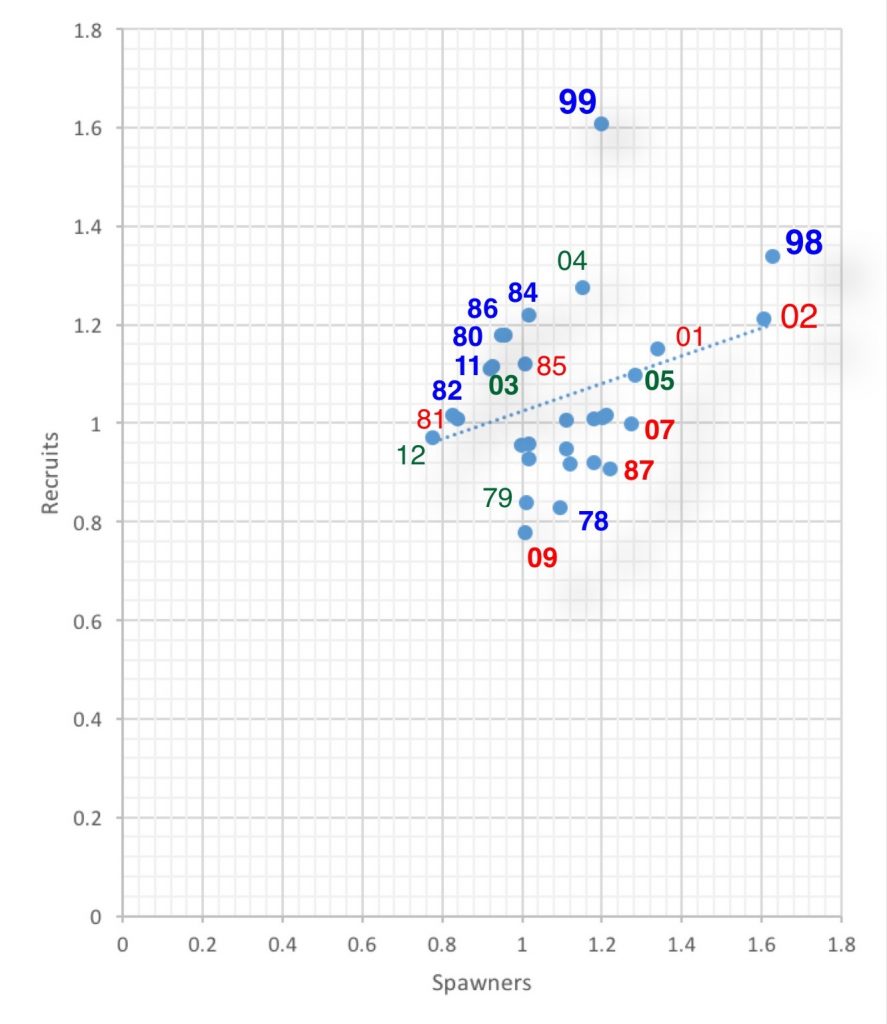 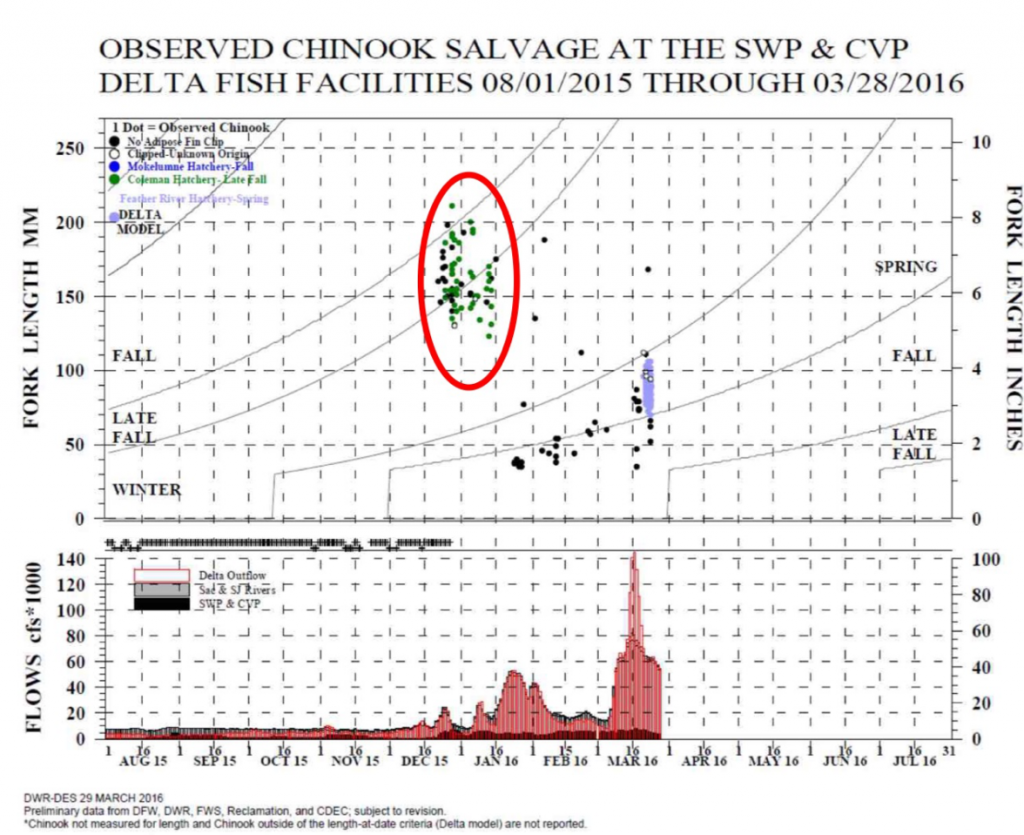