The State Board’s weakened standards require a Net Delta Outflow Index of 4000 cfs and limit south Delta exports to 1500 cfs. 4000 NDOI was achieved during the first three days of the month, but a spring tide pushed into the Delta, resulting in actual negative net Delta outflows (NDOs) that were -6000 cfs on May 2. So much salt pushed into the central Delta (see charts below) that South Delta exports had to be reduced from the allowed 1500 cfs to less than 700 cfs. Export reductions were necessary to stop the salt intrusion and to offset the fact that the exported water was becoming too salty. The Smelt Working Group, at its meeting on May 4,1 expressed no apparent concern about the disappearance of the Low Salinity Zone, or about the fact that the population remnants of Delta and Longfin Smelt were pulled into the south Delta.

Meanwhile, the state and federal water project operators dropped Sacramento River Delta inflow from 6900 cfs on April 30 to 5600 cfs on May 2 (oops). They raised Shasta/Keswick releases on May 2 from 7000 to 7500 cfs after lower river flows near Yuba City dropped to 3500 cfs on May 1, as a result of watering up rice fields in the Sacramento Valley. American River (Folsom Reservoir) releases remained settled in at 1000 cfs.

There is simply no excuse for this poor Delta water management. The moon has been around for billions of years and tides are totally predictable. Export water need not have been 600 EC salinity (barely safe for humans and many crops). The several thousand cfs demands for rice fields in the Sacramento Valley could have been restricted for a few days to allow inflow to offset the spring tides in the Delta. Folsom releases could have been bumped up 500 cfs at least for the weekend rafters.

The salt will take a few days to be flushed out by neap tides, but spring tides and salt will soon return. Will Delta water managers be ready? 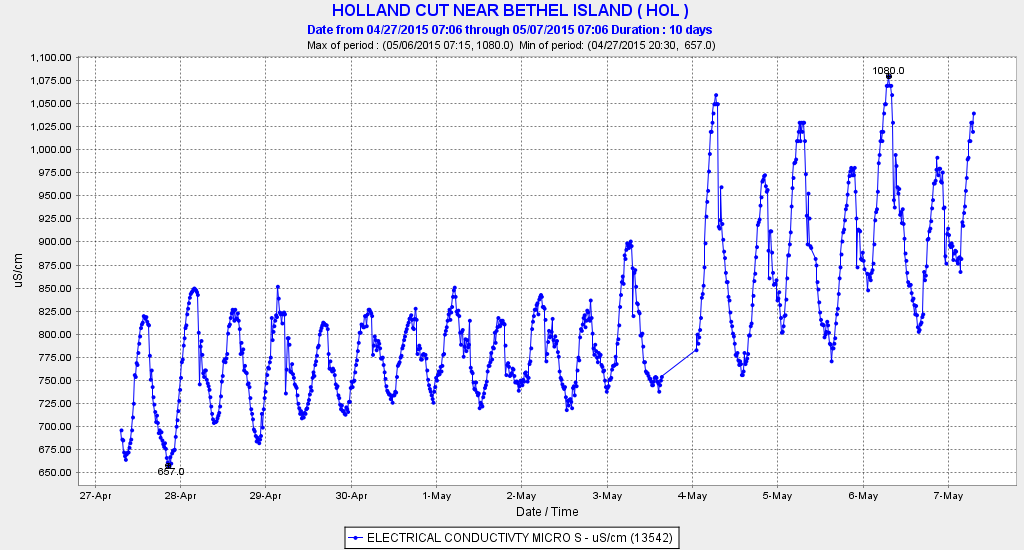 Salinity (EC) from 4/27-5/7 at Holland Cut in the South Delta on Old River – a primary source of South Delta exports. 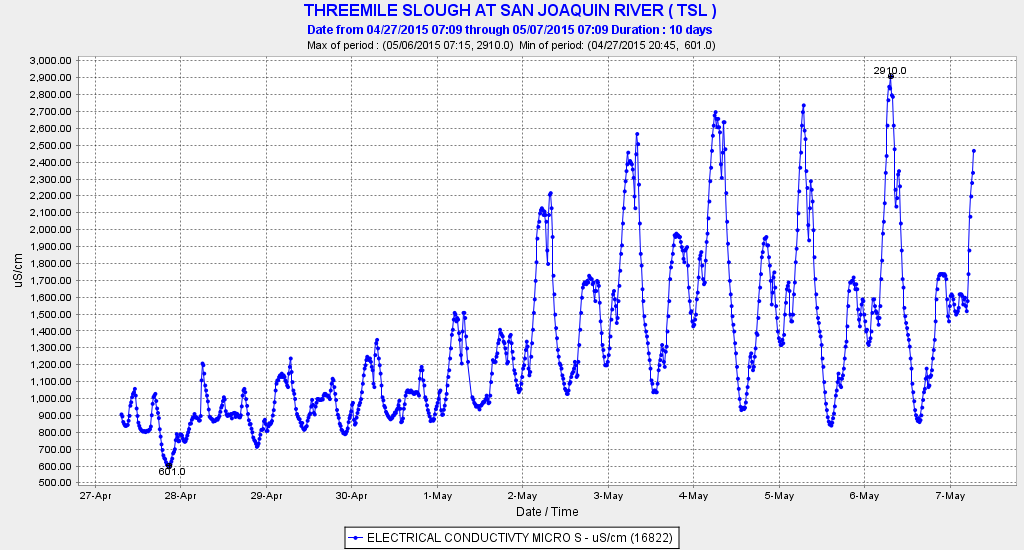 Salinity (EC) from 4/27-5/7 at Threemile Slough – the connection between the Sacramento and San Joaquin rivers near Rio Vista. It is a major channel for incoming tides into the central Delta. Salinity (EC) from 4/27-5/7 at False River – the major connection between the western and central Delta at Franks Tract and Old River. It is a major channel for incoming tides into the central Delta.