Recently, Reclamation closed the Delta Cross Channel (DCC) (Figure 1) near Walnut Grove to reduce salinity at the State Board’s compliance point at Threemile Slough. Normally, the DCC is open in summer to allow fresh water into the central, east, and southern Delta to maintain low salinity water for exports and for agricultural and municipal diversions. However, low fresh water inflows to the Delta due to the drought have resulted in salinity levels exceeding the required 2.78 EC level at Threemile Slough. Closing the DCC effectively forced more of the fresh -+water inflow from the Sacramento River toward the western Delta and Threemile Slough, reducing EC at Threemile Slough significantly (Figure 2). 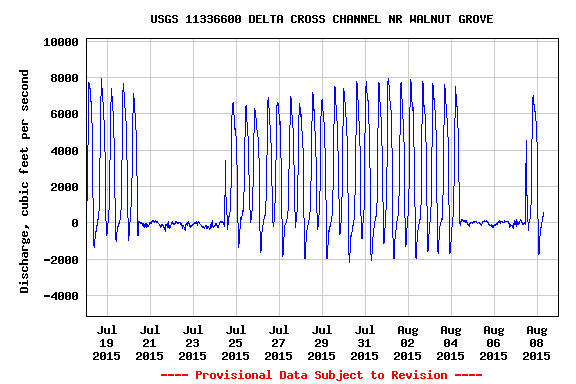 Figure 1. Flow through the Delta Cross Channel in July and August 2015. Zero flow indicates the gates are closed. Gates are normally open in summer. Figure 2. Salinity (EC) at Threemile Slough compliance point in western Delta. Salinity (EC) must be maintained below 2780 EC on a seven day average. Salinity exceeded the target on July 18. Closing the DCC on July 19 immediately reduced salinity to the compliance level. Subsequent closing of the DCC on July 25 brought salinity back up to and exceeding pre-closure levels. As the seven day compliance target was again exceeded August 1-3, the DCC was again closed on August 4 to again bring the salinity into compliance.

The influx of warm water is apparent at Rio Vista where the Sacramento River enters the western Delta (Figure 4). Not only did the water temperature immediately rise with the higher flows on July 19, but the higher temperatures were sustained after the flows receded on July 25.

Overall, the unprecedented closure of the DCC in summer leads to rapid and significant changes in flow, salinity, and water temperature in the Delta that are likely detrimental to Delta native fishes including the Delta Smelt. Figure 3. The map annotations depict changes from recent closures of the DCC (located at blue X). The closure reduced flow in the Mokelumne channels (dotted red line) by 3000 cfs. Georgiana Slough (west side of Tyler Island) flow increased 1000 cfs. Flow into the Sacramento channel at Rio Vista increased 2000 cfs. Net water temperature increase throughout the western Delta was about 2°F. 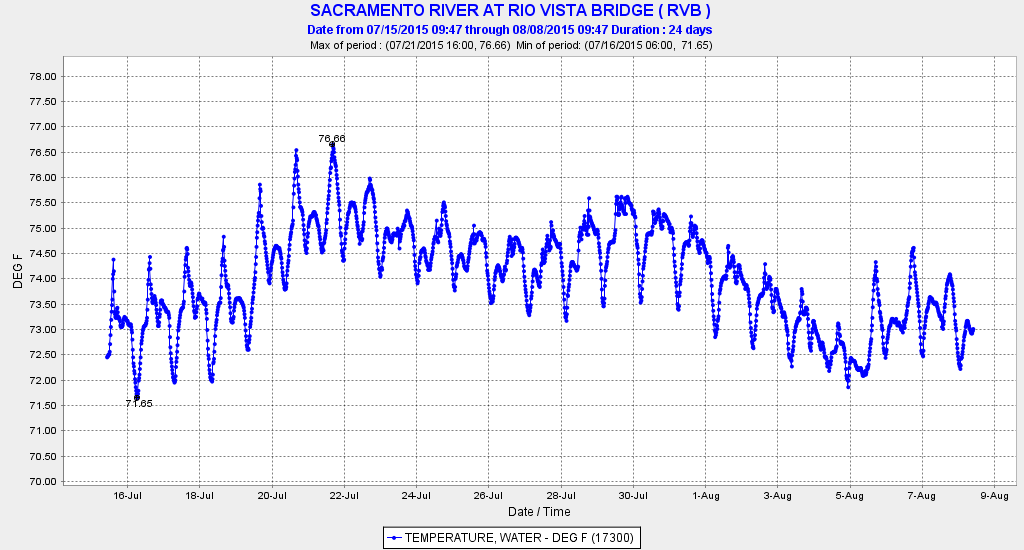