This summer’s placement of the False River Barrier in the central Delta has been touted for saving reservoir storage during this fourth year of drought.

Contra Costa Times quoted DWR on the recent removal of the False River Barrier: “The state also managed to reduce the volume of fresh water it released from reservoirs to add to the Delta, preserving the resource instead for the times that salmon need infusions of colder water to survive.” (Contra Costa Times 10/2/15)

DWR also posted: “The barrier helped limit the tidal push of saltwater from San Francisco Bay into the central Delta and minimized the amount of fresh water that had to be released from upstream reservoirs to repel saltwater.”1

A DWR news release stated: “The barrier was an essential part of DWR’s strategy to maintain good water quality in the Delta and preserve water in upstream reservoirs to help keep young salmon cool enough to stay alive downstream of dams….The water users in the interior of the Delta, including many farmers and residents there, would have experienced much higher salinity without it… Monitoring at various stations in the Delta showed that the barrier indeed helped improve water quality in the central and south Delta.”2

Question 1. Did the False River Barrier save reservoir water by reducing release requirements?

A. Shasta – the answer is no, Shasta retained its prescribed releases all summer. There was thus no benefit of False River Barrier in retaining Shasta’s cold-water pool.
B. Trinity – no, it too contributed only to the fixed release to Sacramento River.
C. Oroville – releases to Feather River were relatively high much of the summer contributing substantially to Delta inflow.
D. Folsom – Releases to American River were relatively high all summer contributing substantially to Delta inflow, although depleting the reservoir’s overall storage and cold water pool.
E. New Melones – Stanislaus and San Joaquin flows were minimum all summer.

The overall answer is that slightly less Oroville and Folsom releases may have been needed with the False River Barrier; whether releases were lower or not is difficult to determine

Question 2. Was less freshwater outflow to the Bay required because of the False River Barrier?

No, outflow standards were prescribed by State Board and for the most part were met.

Threemile Slough was the controlling compliance point this summer, at times requiring increased Delta inflow and closure of the Delta Cross Channel for compliance. The False River Barrier likely increased the effectives of these measures to lower Threemile salinity.

Question 5. Was Franks Tract salinity lower because of the False River Barrier?

Question 7. Were South Delta exports higher than would have been possible without the False River Barrier?

Yes, because a higher proportion of freshwater inflow from the Sacramento River via the Delta Cross Channel and Georgiana Slough could be exported with False River closed.

The Department of Water Resources’ assertion in the news article that salmon benefitted from the False River Barrier is unfounded. There were no measurable savings to reservoir storage or cold water pools essential to salmon.

Salinity found another path into Franks Tract via the mouth of Old River, but to the detriment of upstream movement of the Low Salinity Zone in the lower San Joaquin River. South Delta exports were able to take a higher portion of the freshwater inflow to the Delta from the Sacramento River because of the False River Barrier. Higher South Delta salinities in 2015 demonstrated a willingness to accept higher salinities in exports with the False River Barrier in place or simply an extreme demand for some summer export. Salinities dropped sharply in September with higher freshwater inflows (and outflows) to accommodate South Delta export and water transfers. The transfers were possible as water demands from the Sacramento Valley and Delta sharply declined, and water was sold for transfer south of the Delta. The False River Barrier likely helped facilitate the across-Delta transfers, which declined after the False River Barrier was removed at the end of September. 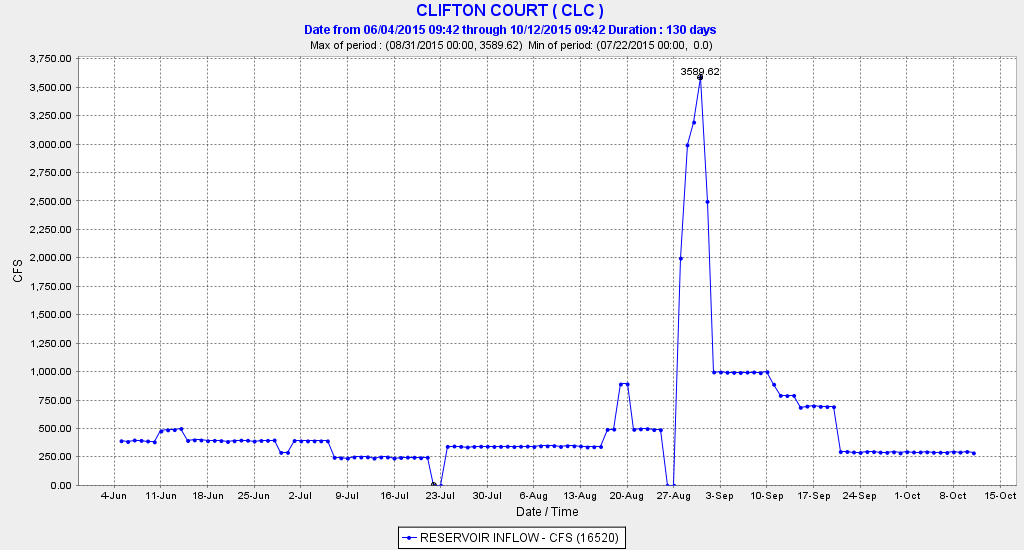