In a recent post1 I related that the Scott River, a major salmon producing Klamath tributary in northern California near Yreka and Fort Jones, is again in crisis due to low fall flows in the present drought. I suggested that normal December storms might be too late to save the Fall Run Chinook, but would likely accommodate the later spawning Coho.

Two December storms (Figure 1) have come and helped the salmon. Counts near Fort Jones recently reached near 400 for Chinook and 200 for Coho. Neither number is good, but the Chinook number, though preliminary, is very low, as it should be several thousand or more. Waiting for several months to ascend the river to spawn has likely taken its toll on the Chinook. The storms were also nearly too late for Coho, but these circumstances are fairly normal for Coho. 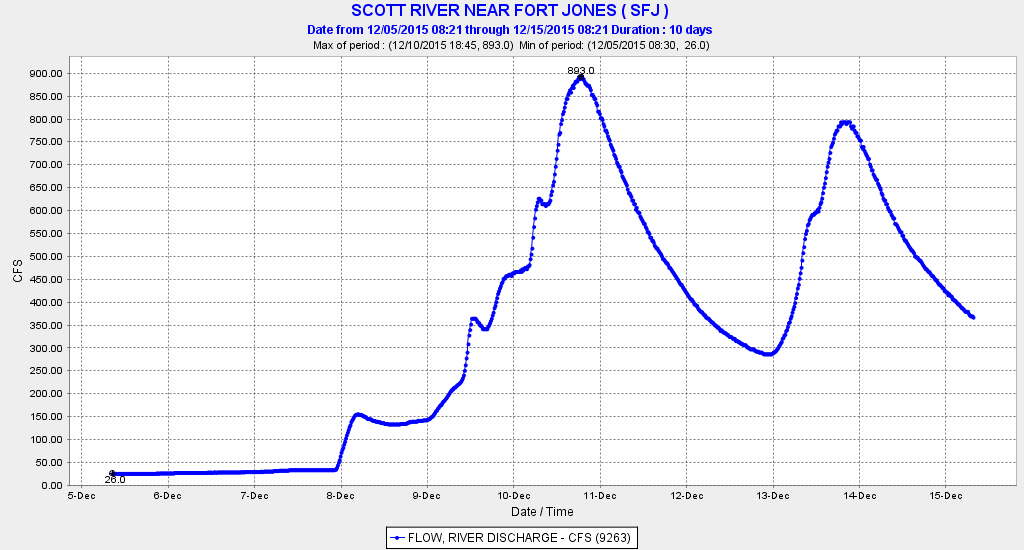 The late storms made things very difficult for Chinook. In a recent newspaper article2 on the Scott, it was noted that late runs usually spawn in the lower river, downstream of the good spawning reaches. The lower river spawning grounds are subject to winter storm scouring. In the article, some sources blamed the low fall flows on agricultural groundwater pumping during the summer and fall, which lowered the water table in Scott Valley. Lack of summer snow storage in the adjacent mountain ranges was also a key factor.

But the article and its sources miss what my previous post suggested as a solution to the problem. Groundwater could have been pumped into the river in the Valley in substantial amounts in the fall using some of the irrigators’ idle pumps. A concerted pumping effort in October and November, for one to several weeks, could have gotten the Chinook up from the mouth into the Valley to the perennial flowing spawning tributaries and river reaches. The salmon could have spawned or have been ready to spawn when the rains did come.

The winter rains are already recharging the groundwater basin in the Scott Valley, so the costs of the effort in terms of next year’s water supply would have been minimal. The cost of electricity is minuscule in comparison with the loss of production of one of the Klamath’s most prolific salmon-producing tributaries.