Spring-run are the most prized of the four runs of Central Valley, West Coast, and Alaska Chinook because they leave the ocean with the biggest stores of fat energy and strength to sustain them through to spawning. They are prized for sport and table value.

Spring-run are perhaps best adapted of the four runs to California’s Central Valley because they migrated upstream with the snowmelt in spring. Dependable high cold flows allowed access to colder-summer mountain habitats. Yearling smolts emigrated to the ocean in the same snowmelt period.

Central Valley runs that once numbered in the hundreds of thousands or more are now down to a few thousand. Multimillion dollar efforts have been underway now for several decades to restore spring-run. The spring run goal for the Central Valley Project Improvement act of 1992 is 59,000 spring-run below Shasta in the Sacramento River. The average run size from 1992-2012 was 684. The primary reason for lack of recovery is low flow and high water temperatures in spring in the lower Sacramento River and spawning tributaries. No river or creek has been unaffected, and so the spring-run have rapidly declined. (See references for early reports on spring-run and their decline.)

Peak migration of adult spring-run Chinook into the upper Sacramento occurs in May and June.1 About 80% of the spring-run passes Red Bluff after May 15. The adults oversummer in the upper Sacramento River and its tributaries before spawning in September and October. During migration and oversummering they require cold-water habitat for survival and the maturation of their gonads. Lack of cold water habitat reduces the viability of their eggs and sperm and subjects adults to poor survival from disease, energy loss, and heat stress. 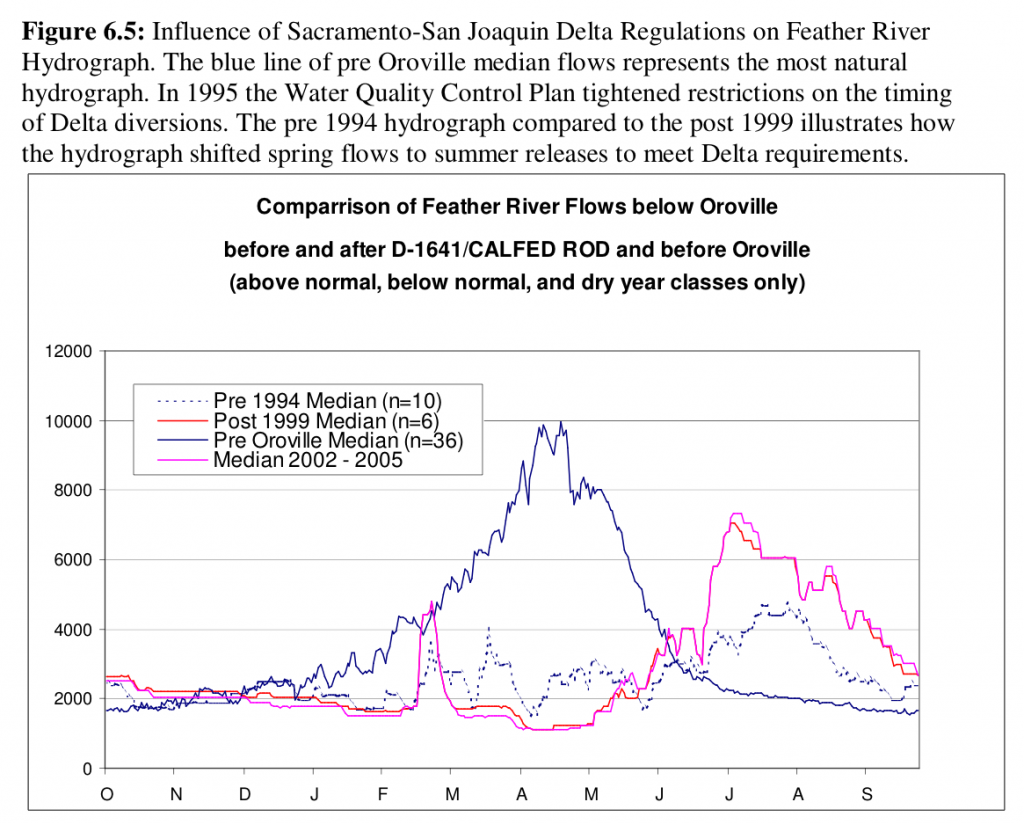 The issue of low river flows and high water temperatures in spring has received little consideration in drought management plans, salmon biological opinions, and the NMFS Central Valley Recovery Plan. The only consistent attention has been centered around reducing Shasta releases and lowering flows at Wilkins Slough to save Shasta storage and cold-water pool in dry years. Even this spring, with a full Shasta Reservoir, the overwhelming concern for saving the Shasta cold-water pool has led to minimum releases and Wilkins Slough flows near 3000 cfs. Mention is rarely made of meeting the Basin Plan 68°F criterion for the lower Sacramento River. If anything was mentioned, it was for allowing a reduction in spring flows below Keswick and at Wilkins Slough to 3000-4000 cfs to save Shasta storage and cold-water pool. Most of the required water for Delta inflow has come from the Feather and American Rivers.

Another problem rarely mentioned is warm water discharges, especially agricultural drainage into the lower Sacramento River in spring. Water temperatures from these considerable sources can easily exceed 80°F. The Knights Landing Outfall of the Colusa Basin Drain is one such source. I once measured 80°F on May 1 at the mouth of the Feather River during the peak season of the Feather’s substantial spring-run.

The operations that imperil spring-run create a serious issue that deserves much more attention. Increasing Wilkins Slough flows by several thousand cfs would go a long way to reducing this year’s problem. This would require up to 200,000 acre-ft of Shasta storage, or about 5% of the 4.2 maf of present storage. The added flow would help maintain winter-run spawning near Redding in June and improve Delta inflow/outflow and perhaps exports. At present, 7,000 cfs is being released at Keswick, with only 3000 cfs reaching Wilkins Slough. The difference is being diverted from the upper river by CVP water contractors. 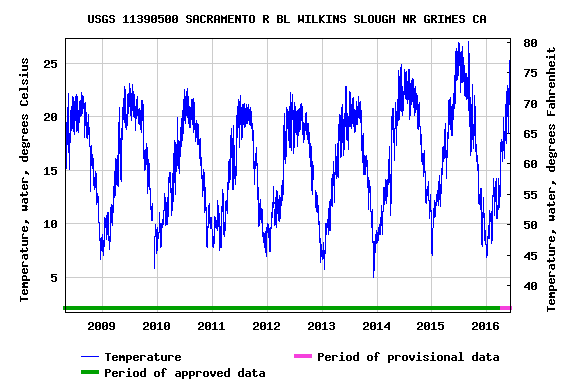 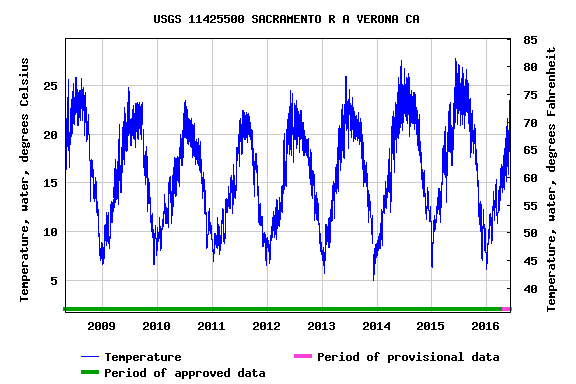 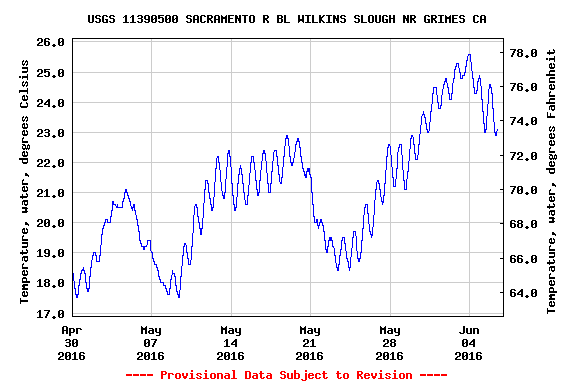 Chart 5. Water temperature of the Sacramento River at Wilkins Slough (RM 125) from May to early June 2016. 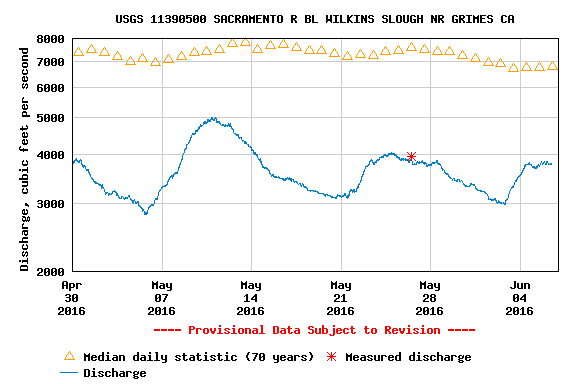 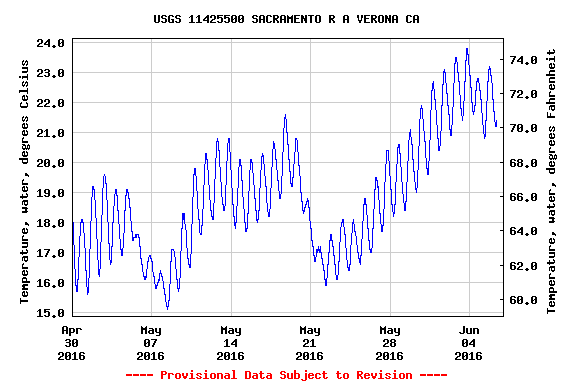 Chart 7. Water temperature of the Sacramento River at Verona (RM 80) from May to early June 2016. 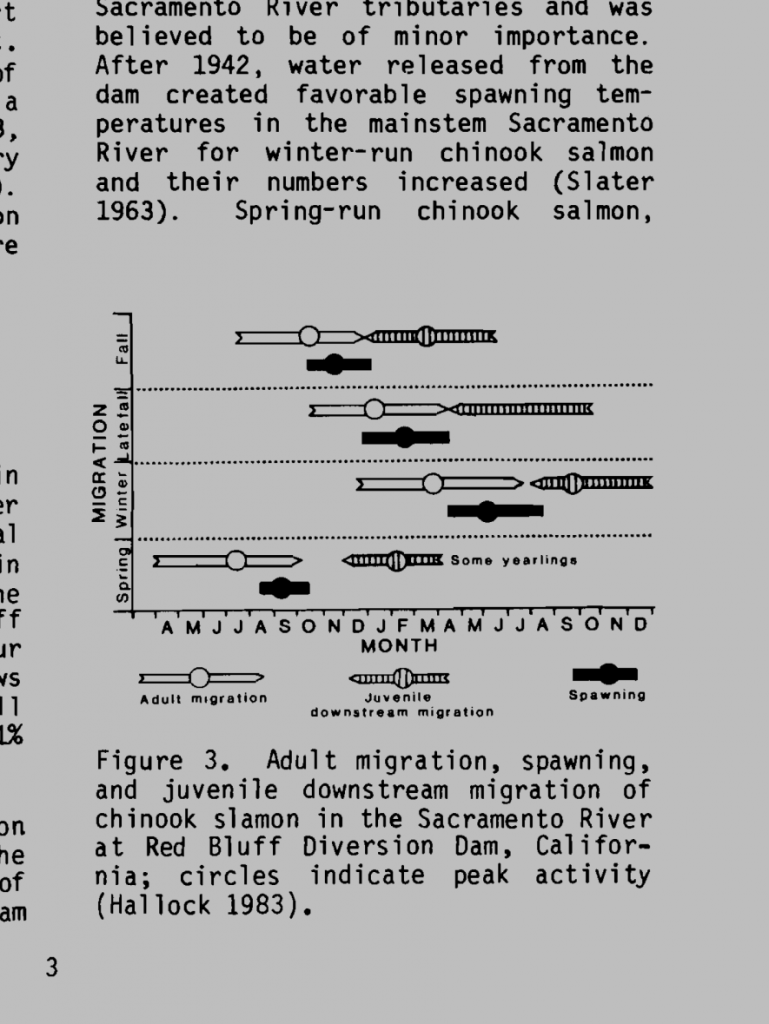