The Smelt Working Group packed its bags for the summer after its last meeting on May 31, just when it was most needed.  The water temperature in the South Delta had reached 77°F/25°C in the first week of June, forcing the Working Group to close shop, consistent with the biological opinion.  The 5000 cfs June south Delta export limit in the biological opinion also departed.  Exports soon rose above the earlier 3000 cfs limit, reaching nearly 7000 cfs later in June (Figure 1). 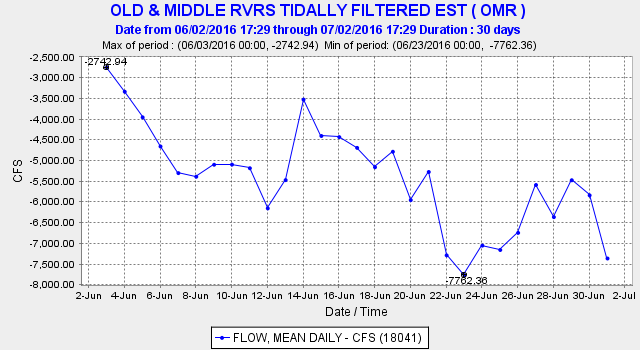 Figure 1. Old and Middle River net flows in June 2016. Negative flows generally correspond with export rates at the south Delta pumping plants. The limit in the Delta Smelt biological opinion is -5000 cfs for June, but the limit does not apply once the south Delta water temperature reaches 77°F/25°C.

The two June DFW 20-MM surveys showed that small numbers of Delta smelt remained in their normal northwest Delta nursery area (Figures 2 and 3) in slightly brackish, cooler (20-22°C) water. Still directly and indirectly vulnerable to the effects of exports, these smelt were sustained by a bare minimum of Delta outflows (7000-7500 cfs). What they needed and are still failing to receive are higher outflows to move them west to Suisun Bay.1 With exports soon to rise in July up to the full 11,400 cfs maximum capacity, and without further hope of higher outflow to the Bay, these last smelt may soon succumb to the rigors of the Delta as they did during the past four years of drought.

Instead of the prescribed standard of 6,500 cfs Delta outflow in July, an outflow of at least 8,000 cfs is necessary to protect the remaining smelt.