Winter is the season of high river natural flows.  Even in drought years, Sacramento River flows measurably spike during storms that provide stormwater runoff from numerous undammed tributaries and local sources (Figure 1).  On the mainstem Sacramento River and those of its tributaries that also feature rim dams, most of the stormwater inflow is captured and stored for spring-fall water supply.  On the San Joaquin River, all the major tributaries and mainstem have large storage reservoirs that capture Sierra and upper Valley runoff, so there is limited controlled winter runoff (Figure 2).

On the Sacramento River, winter flows carry juvenile winter-run, spring-run, late-fall-run, and fall-run salmon through up to 200 miles of rivers and the Delta to the Bay and ocean.  Much of the route is leveed and channelized, with little cover/refuge and abundant predators.  Higher flows provide turbidity and lower water temperatures that deter predation.

In the San Joaquin River watershed downstream of the rim dams, flows are minimal in the absence of flood flows and dam spills.  Thus, de facto drought conditions persist downstream of San Joaquin watershed dams in all but the wettest years.  Recruitment into the salmon populations is confined to San Joaquin offspring produced in wet years, augmented by hatcher strays, since there is minimal juvenile survival to the ocean in other years because of low flows.

In the non-flood years where reservoirs capture most reservoir inflow during the winter, supplemental releases from Central Valley reservoirs should be considered to piggy-back on and enhance natural flow pulses to benefit salmon and other native fish.  Such action would most benefit salmon populations below rim dams.  Such releases can be prescribed as a portion of the natural or unimpaired inflow to the reservoirs. 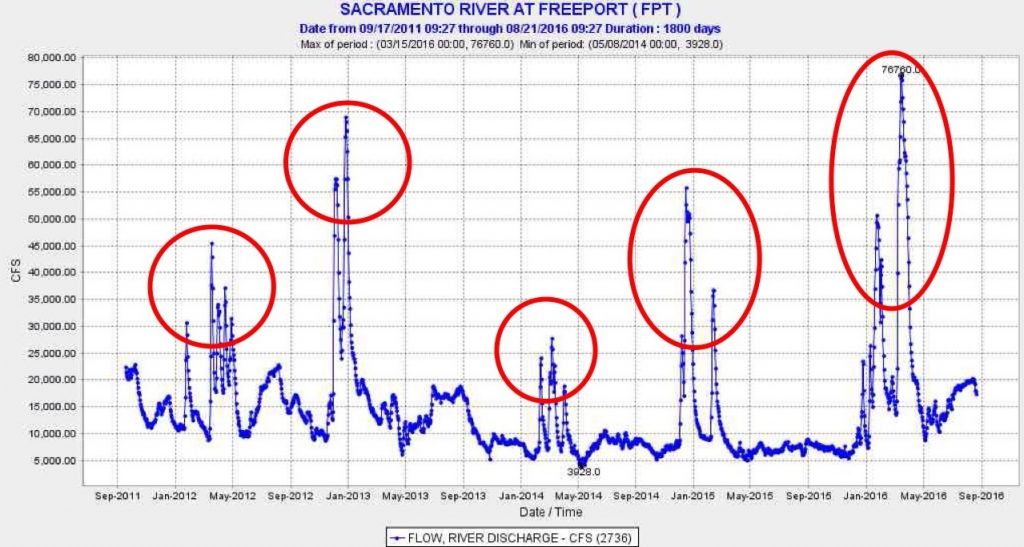 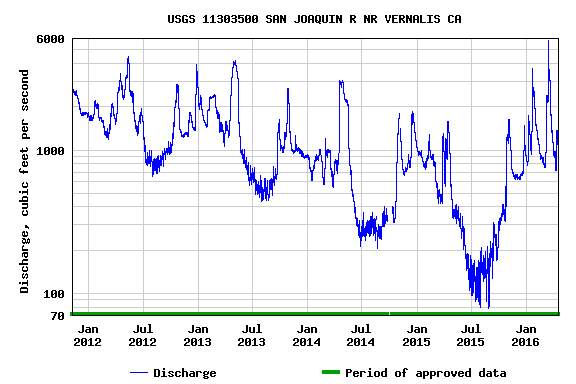 Figure 2. Delta inflow from the San Joaquin River 2012-2016 as measured at Vernalis. Prescribed fall and spring flow releases from reservoirs for salmon migrations dominate the hydrograph in these drought years. Winter flow pulses were lacking with the exception of 2016. Water years 2012-2016 were drought years in the San Joaquin watershed.