Senator Feinstein has added a rider to the Drought Water Bill that has been referred to as a “poison pill” for endangered salmon and smelt. Senator Boxer has vowed to fight passage of the Water Bill because of Feinstein’s “poison pill” rider. Senator Feinstein has claimed that the rider is a compromise to get support for the overall water bill that includes provisions to enhance California’s water supply infrastructure.

“Even amid heavy storms, only 852,000 of the 5.5 million acre-feet of water that flowed into the Delta during the first two months of this year—enough to sustain nearly two million acres of farm land—was sent south. The rest drained into the San Francisco Bay due to a lack of surface storage in the Sierras and pumping restrictions ostensibly intended to protect endangered species…. The Feinstein rider would give regulators some discretion to increase pumping to a little less than half of capacity.” Wall Street Journal article.

Senator Feinstein’s rider would allow weakening of provisions in the federal salmon and smelt biological opinions that restrict Delta export pumping from December to June (Figure 1). The rider would allow more Delta export pumping during periods of higher Delta outflow, as in the two storm periods shown in Figure 1 (bottom chart). Even if this weakening only allowed increased exports up to 50% of capacity, exports could be raised to approximately 13,000 acre-ft per day from the present 2500 to 10,000 acre-feet per day limits under the biological opinions (the amounts vary with the immediate risk to species). These risks would be substantial and would further jeopardize winter-run salmon, spring-run salmon, green sturgeon, steelhead, Delta smelt, and longfin smelt. All of these species depend heavily on the Bay-Delta during the times of year in which the current biological opinions potentially restrict exports. 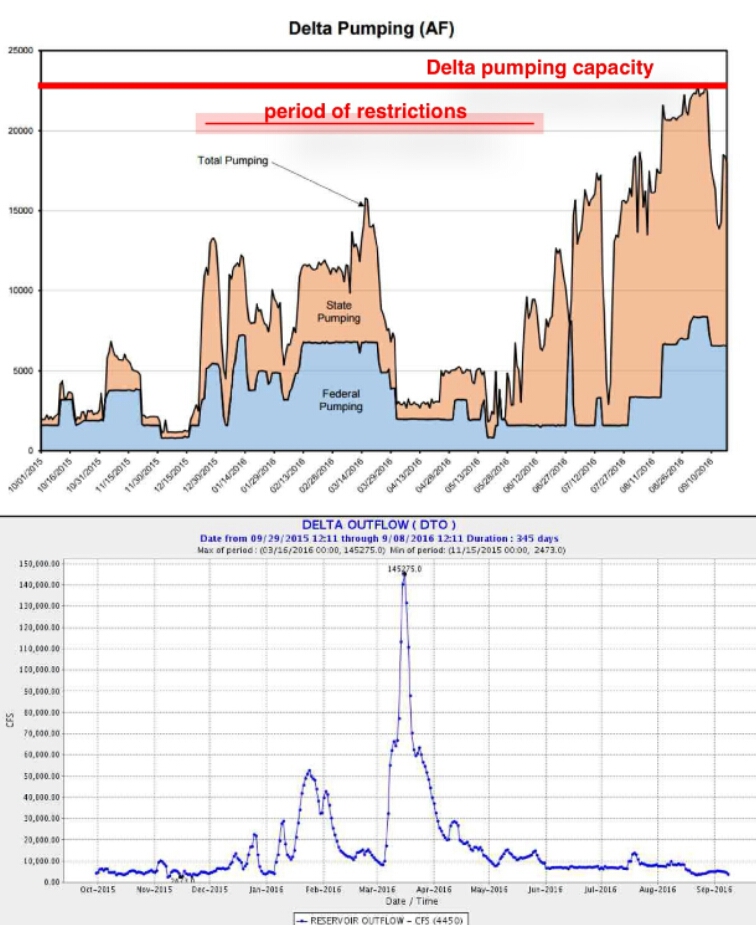