One way to effectively increase the California coastal salmon population is to increase survival of Chinook salmon smolts released by the three large Sacramento Valley hatcheries. These three hatcheries produce nearly 30 million fall-run smolts a year and account for 70-90% of California’s ocean and river fishery catch. A one percent smolt survival leads to 300,000 adult returns to the fisheries and escapement to spawning rivers. Doubling survival to two percent would increase returns to 600,000 adults. With survival at or below one-half percent in recent drought years, returns have fallen to near 100,000.1

How can we get survival back to one or even two percent or higher? Fortunately at least a quarter of the smolts are tagged to allow estimates of their survival and contributions to fisheries and escapement back to spawning rivers. Survival estimates are now available for hatchery smolts released up to 2013. Figures 1-3 show a summary of survival from the three largest hatcheries for salmon brood years 2008-2012 (smolt releases from 2009-2013). I drew the following conclusions from the figures:

In conclusion, adult salmon stocks in coastal waters continue to benefit from transporting smolts to Bay net pens. Further benefits may derive from barging the smolts 100 to 200 miles to the Bay. Potential benefits of barging over trucking include higher survival and reduced straying. Release of hatchery smolts directly to Sacramento Valley rivers near the hatcheries provides minimal survival especially in drier years. Increasing survival factors like augmenting flow releases from reservoirs at the time of river hatchery releases may improve survival, but trucking and barging appear necessary to keep ocean and river fisheries afloat in the short term. 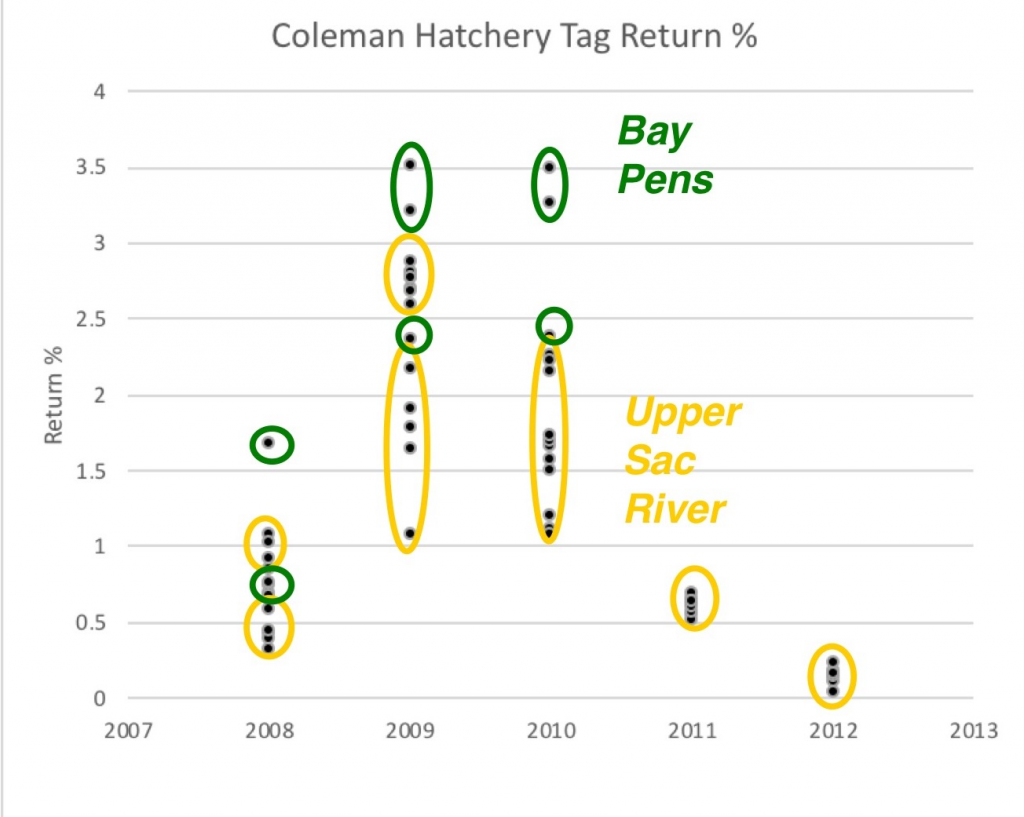