Striped Bass (stripers) came from New Jersey by train in milk cans 135 years ago to provide a vibrant commercial fishery and regional food supply. Today, stripers remain a prized gamefish in Central Valley rivers, the Delta, and the Bay. Like the native smelts, salmon, steelhead, herring, and sturgeon, stripers have undergone a dramatic decline over the past several decades (Figure 1). Many have blamed the stripers for these declines, when in fact the entire fish community and food-chain of the Bay-Delta has suffered from the man-made spring-summer droughts in the Central Valley. Stripers may prey on listed salmon, steelhead, and smelt, but are far more likely to prey upon native and non-native competitors and predators of these listed species.

Despite their strong inherent ability to recover (high reproductive capacity and long life 1 ), stripers have declined in abundance from 3-5 million adult fish in the 60s and 70s to less than a half million adults in recent years (CDFW unpublished data). A hatchery and pen-rearing program in the late 1990s and early 2000s released millions of young stripers, which led to some recovery in young production (Figure 1) and adult catch (Figure 2). Today, all indications are that stripers are now at record low levels. Stripers are one of the species identified as suffering in the Bay-Delta’s Pelagic Organism Decline2. Their decline can be directly related to Delta water exports, especially in summers of dry years since 1995, when summer protections for stripers were removed from Bay-Delta water quality standards.

Despite low adult numbers and poor summer Delta habitat conditions, recent production of young stripers in wet years is consistent with recent historical levels (Figures 3 and 4). However, production of young is very low in dry years (Figure 5). The reason for the difference between wet and dry year survival is the location of low-salinity nursery habitat in the estuary (Figures 6, 7, and 8). Young stripers are more vulnerable to Delta exports in dry years when Delta inflows are low and their Low Salinity Zone3 nursery area is located in the Delta (Figure 9).

What can be done to help stripers and the striper fishery? 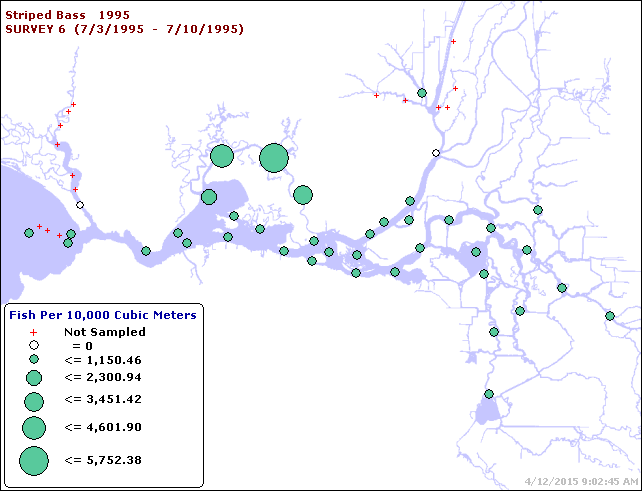 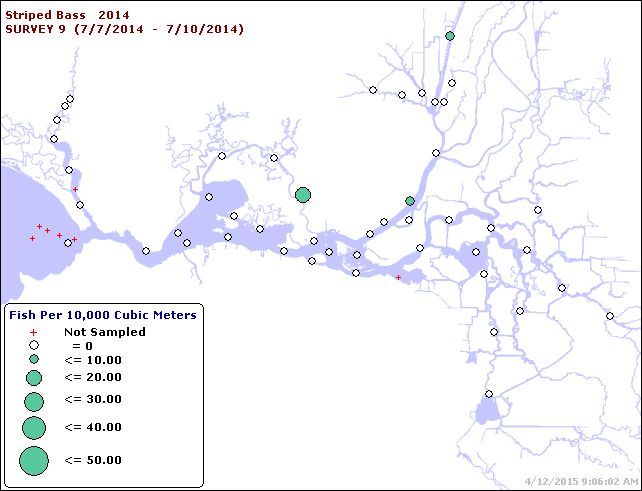 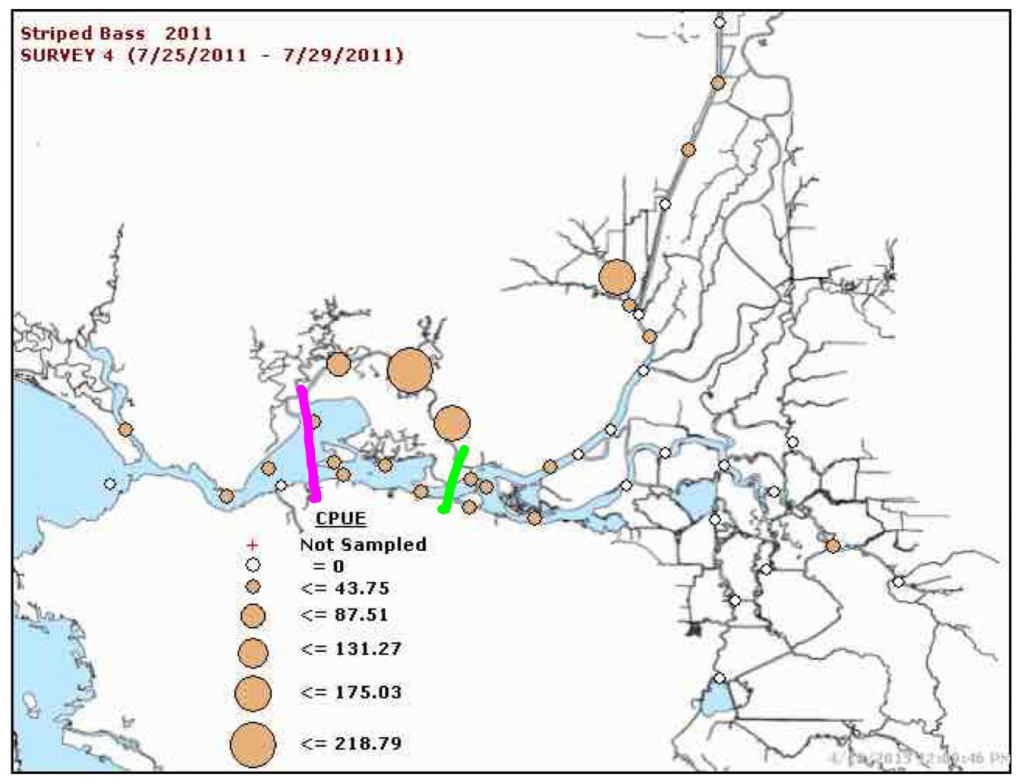 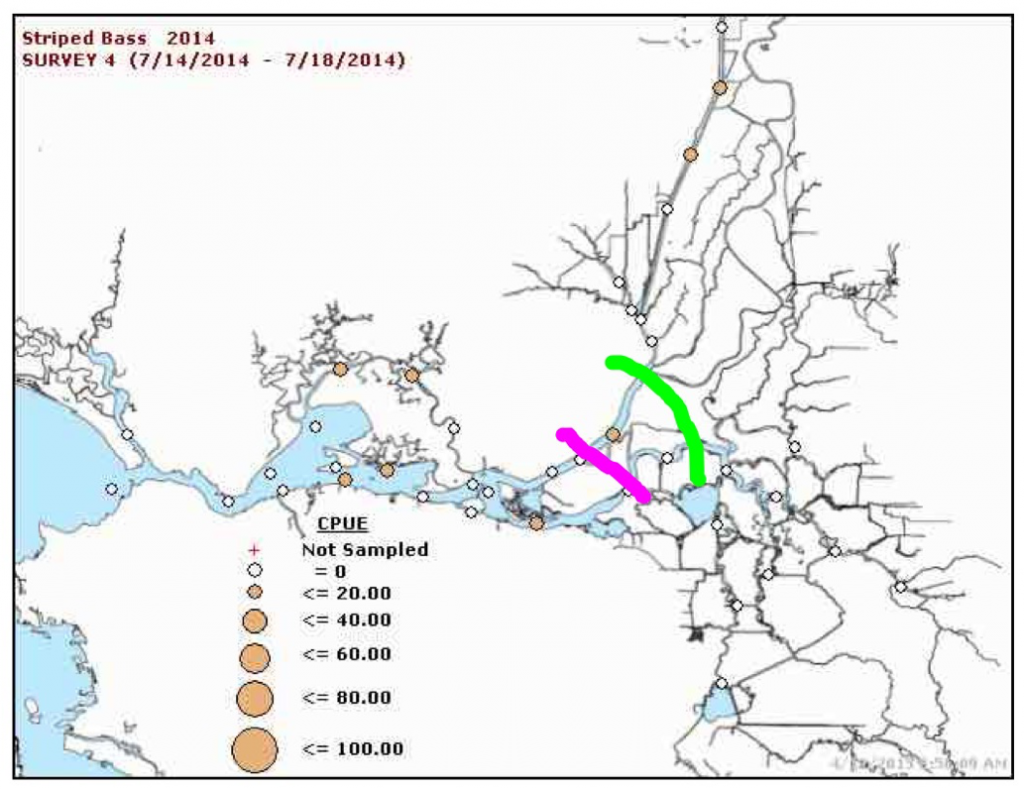 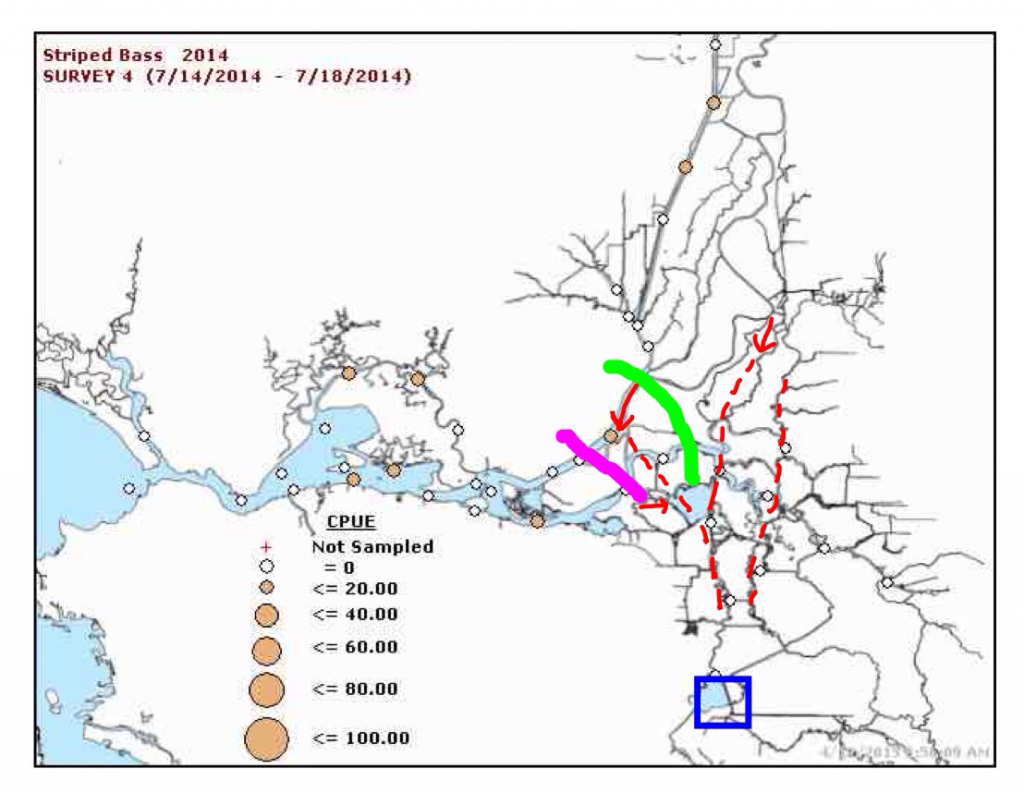 Figure 9. The mechanism for poor Striped Bass survival in summers of dry years is larval and juveniles being drawn from north to south across the Delta to the south Delta export pumps (blue box). The Low Salinity Zone is in Delta and is continually degraded by loss to pumps. Magenta line is the approximate location of 2640 EC salinity (about 2 ppt salinity, commonly referred to as X2). Green line is the approximate location of 500 EC salinity, generally considered the upper extent of the Low Salinity Zone.