It was the first week in June 2021. The salmon were the last of 2021’s endangered winter-run and threatened spring-run Chinook salmon heading up the Sacramento River to spawn below Shasta Dam and in tributary streams. Many were in the middle of their 300-plus-mile journey from the Golden Gate through the Bay, the Delta, the lower Sacramento River. Water temperatures rose to lethal levels through the lower end of the Sacramento River, as flows at Wilkins Slough (River Mile 125) dropped nearly 50% to 3500 cfs and water temperatures reached 25ºC (Figure 1).

Water temperatures above 68ºF (20ºC) are stressful for salmon, and 72ºF (22ºC) is their maximum tolerance limit that forces them to seek cold-water refuge. If salmon cannot find refuge, water temperatures near or above 77ºF (25ºC) are lethal.

On June 1, the State Water Board approved a “temporary urgency change petition” (TUCP) from the Bureau of Reclamation and the Department of Water Resources (DWR) to reduce Delta outflow. By June 2, less than half of the flow released in Redding to the upper reaches of the lower Sacramento River flow (about 8000 cfs, including 7000 cfs from dam releases) was reaching Wilkins Slough, 180 miles downstream. In those 180 miles, more than half the flow was diverted to agriculture. The high early-June water temperatures and low flows are unprecedented for late spring (Figure 2).

Reclamation and DWR’s petition discussed impacts to fish in the Delta. The water temperatures in the Sacramento River at Wilkins Slough in the first week in June show how the Delta and salmon far upstream are connected. The upstream impacts of bad Delta decisions is once again transparent: low requirements for Delta outflow means low flows and lethal water temperatures in the Sacramento River.

An extreme heat period for the Sacramento Valley is expected for the third week of June, and it is still only spring. Winter-run and spring-run adult salmon that made it to the spawning grounds below Shasta and Keswick dams earlier this winter and spring are very likely to experience highly stressful water temperatures (>60ºF) for holding and spawning. Because it is releasing too much agricultural water now, Reclamation is likely to run out of cold water in Shasta by the time that fall-run salmon arrive in Redding in October and November.

The drumbeat of dying salmon will be pounding all summer and into the fall. 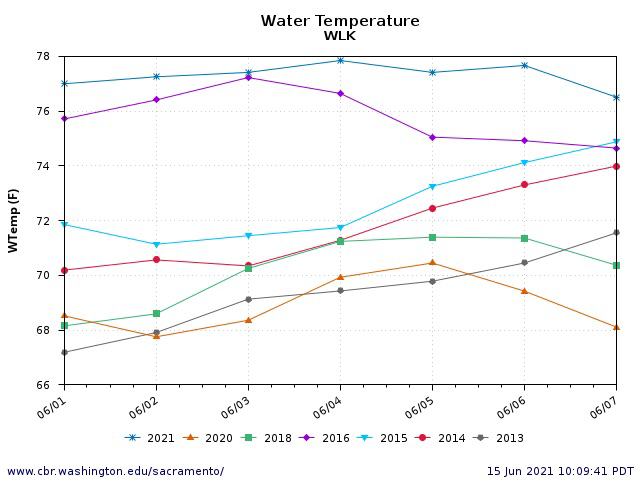 Figure 2. Water temperatures in the Sacramento River at Wilkins Slough (RM 125) in dry years of of the past decade. Values for 2021 are literally over the top. The lethal level for salmon is 77ºF. Stress occurs at >68ºF. Migration ceases at 72ºF.