In a post in July 2021, I discussed the problems facing Shasta River salmon.  An 8/20/22 article in CalMatters described how the problems became acute this summer when the local ranchers’ water association ignored the State’s emergency order to stop diverting water from the Shasta River in this drought year.  After complying for most of the summer, the ranchers diverted about 20 cfs of water for about a week in mid-August (Figure 1; blue line) 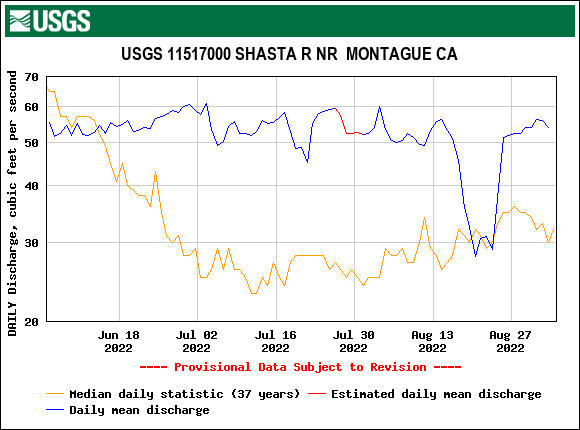 Figure 1. Streamflow in the lower Shasta River upstream of Montague. Ranchers complied with the State’s emergency drought order until mid August. After a week under the threat of fines they stopped diverting.

What the ranchers did in mid-August was simply what they had been doing for decades but were asked to stop in 2022 (see Figure 1, median for 37 years; orange line).

It appears based on the downstream Yreka gage that other ranchers also took part in ignoring the State’s mandate (Figure 2) as the deficit reached about 30 cfs.  These other diverters also returned to compliance with the mandate after a week of non-compliance.

Several reductions in Shasta River flow are not mentioned in the CalMatters article. The total water supply to the Shasta River from springs  originating from Mt. Shasta is somewhere between 250 and 300 cfs in most summers (Figure 3 shows summer of wet year 2017).  In critical drought year 2022, the total supply is closer to 200 cfs, because there are less spring inputs and demands are greater.  In general, about 40-50 cfs is taken out by large wells from the 100 cfs input of Big Springs (leaving the roughly 50 cfs of river flow reaching Montague in Figure 1).  The springs shown in Figure 3 provided less inflow in drought year 2022 than they did in 2017, because Lake Shastina is critically low and input from the upper river and its springs are lower (Figure 4).  The upper Shasta River also loses water at Weed to the city supply and to water bottlers.

Coho salmon once thrived in the Shasta River below Big Springs and in the upper Shasta River.  Coho have suffered for many decades under the historical pattern shown in Figures 1-3.  Some of the remnant population may have been living in the 20 miles of river below Montague this summer, until they were subjected to the low flows and very stressful water temperatures that came with the one week of unauthorized diversions.  There is also this year’s run of fall-run Chinook salmon holding in the Klamath River at the mouth of the Shasta River, awaiting sufficient flow and adequate water temperatures to migrate up the Shasta River.

The fact is that the State Water Board can’t solve a century-old problem with an emergency decree in one dry summer.  The State needs to develop a comprehensive solution for the Shasta River that provides 50 cfs of water for salmon year-round (at Montague Figure 1, and Yreka, Figure 2), out of the available 200-300 cfs supply.  Users need to share the rest equitably, especially in a drought year like 2022. 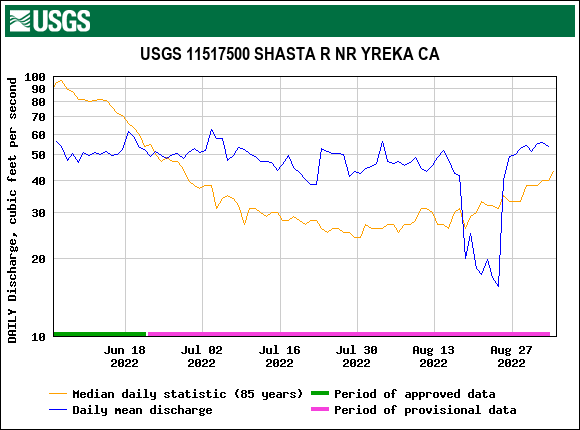 Figure 2. Streamflow in the lower Shasta River downstream of Yreka in the summer of 2022. Also shown is daily average mean flow for the previous 85 years. 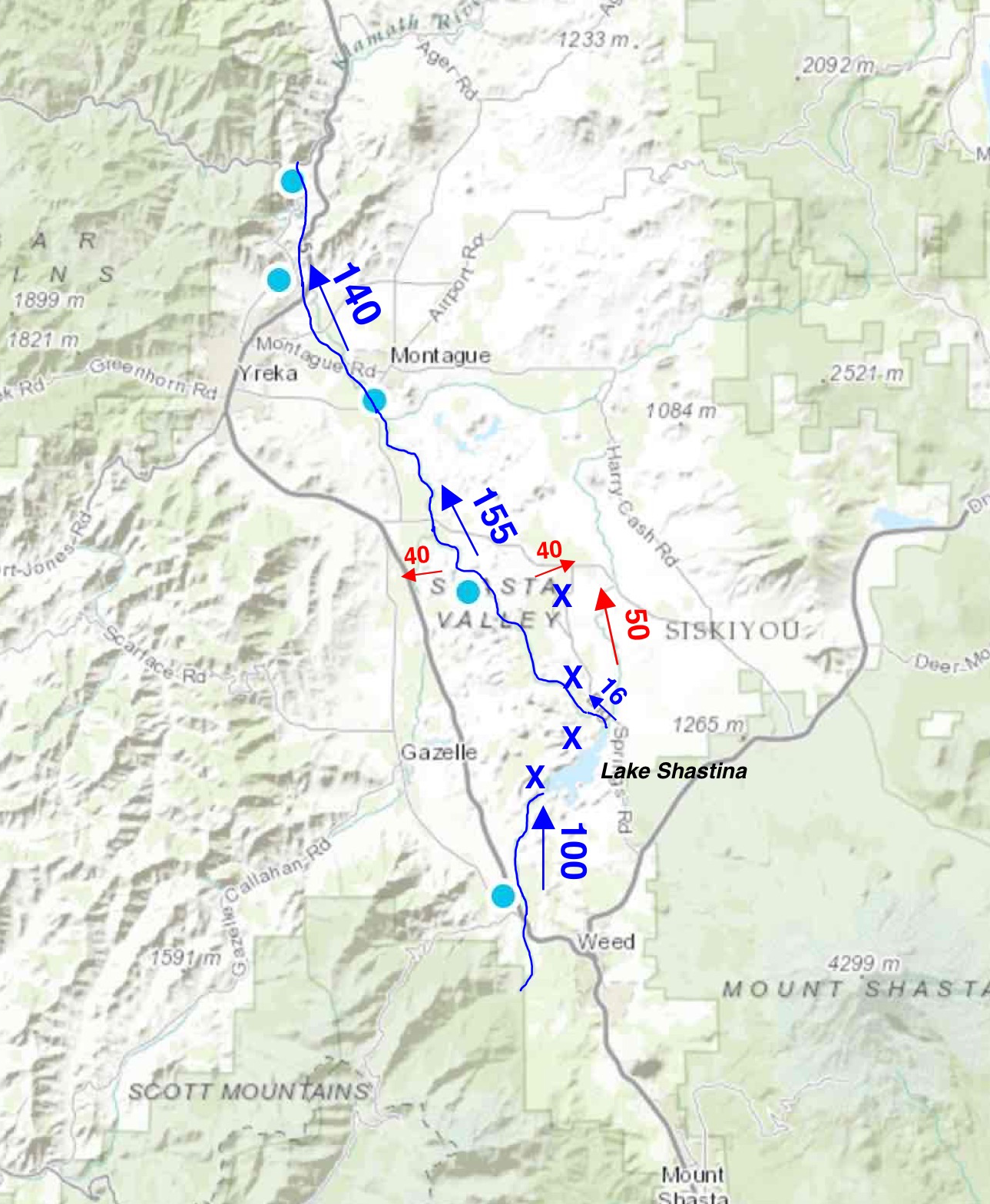 Figure 3. Selected Shasta River hydrology in late May of wet year 2017. Roughly 150 cfs of the 300 cfs total basin inflow in this wet year is being diverted for agriculture, city water supply, and water bottling (Weed) with remainder reaches the Klamath River. Red numbers are larger diversions. The “X’s” denote major springs. Big Springs alone provides near 100 cfs. Of the roughly 100 cfs entering Lake Shastina (Dwinnell Reservoir) from Parks Creek and the upper Shasta River and its tributaries, only 16 cfs is released to the lower river below the dam. The remainder is stored and released to east-side irrigation canal (about 50 cfs). Red numbers and arrows indicate larger agricultural diversions. Up to 15 cfs is diverted to the upper Shasta River from the north fork of the Sacramento River, west of Mount Shasta. Blue dots show locations of river flow gages. 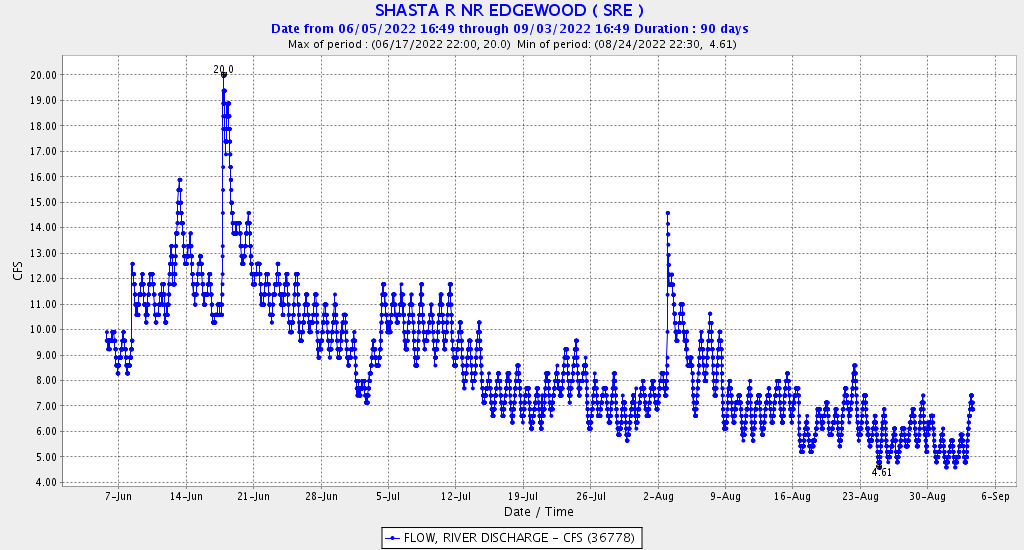 Figure 4. Hourly flow in the upper Shasta River in summer 2022 at Edgewood just downstream of the City of Weed.