There are two key points regarding the Winter-Run Chinook Salmon of the Sacramento River in the 2009 NMFS Biological Opinion (BO) that address the long-term operation of the Shasta-Trinity Division:

NMFS’s near-term measures prescribed in the BO focused on providing suitable water temperatures in the Sacramento River below Shasta in a high percentage of years. The BO prescribed fewer and fewer protections in the drier years with poorer and poorer spawning and rearing habitat near Redding, reaching an unintended consequence of little or no viable habitat left in late summer 2014 and sub-marginal habitat through the summer of 2015. NMFS blamed poor reservoir temperature modeling and forecasting by Reclamation in both years. In reality, problems in both years could have been avoided.

The basic problem in 2014 and 2015 was that the operation of the Shasta-Trinity Division resulted in elevated water temperatures that had lethal and sub-lethal effects on egg incubation and juvenile emergence in the upper Sacramento River. Their excuse: “The immediate operational cause was lack of sufficient cold water in storage to allow for cold water releases to reduce downstream temperatures at critical times and meet other project demands.” The real problem was defective forecasting tools and over-allocation of water to contractors during the third and fourth years of the drought. The lethal outcome was also not only the result of high water temperatures, but also of redd stranding from flow reductions (see figure below). CDFW Report on stranding mortality of salmon eggs and alevins in the Sacramento River in late summer 2014. It is obvious from the report’s cover photo that the problem was not just water temperature.

NMFS’s “Reasonable and Prudent Alternative (RPA)” in its Biological Opinion

“NMFS made many attempts through the iterative consultation process to avoid developing RPA actions that would result in high water costs, while still providing for the survival and recovery of listed species. … We will seek to incorporate this new science as it becomes available through the adaptive management processes embedded in the RPA.” The RPA requires Reclamation to seek higher water costs (more water for salmon) from the State Water Resources Control Board in extreme conditions. But in 2014 and 2015, Reclamation instead asked the State Board for the opposite: contracted deliveries to senior water contractors at the expense of the fish, with a simultaneous weakening of water quality standards for flow and water temperature. The Board granted Reclamation’s request, with NMFS’s “concurrence.” In both its Biological Opinion and in real time decision making, NMFS limited water costs but failed to protect the species. A Biological Opinion can only work when a regulated entity follows it and a regulator enforces it.

The RPA included Action I.1.4, Spring Creek Temperature Control Curtain Replacement. The curtain in Whiskeytown Reservoir at the inlet to the Spring Creek Powerhouse on Keswick Reservoir was replaced in 2011; however, the curtain was minimally effective in cooling water transferred to the Sacramento River from Trinity Reservoir. Large volumes of Shasta cold-water pool (50°F) had to be released into Keswick Reservoir to cool warmer (58-59°F) Spring Creek Powerhouse releases to keep releases to the Sacramento River at the required 54-56°F.

The RPA also includes a suite of actions for operating the Shasta-Trinity Division.

Unable to meet temperature requirements, Reclamation and NMFS are seeking “other solutions”: 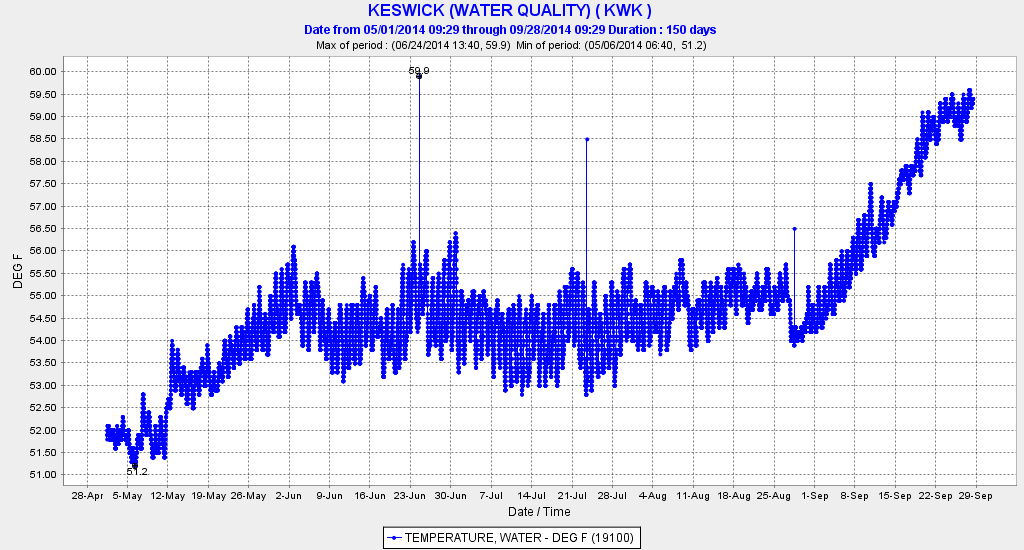 The demise of 2014 Winter Run brood year has been attributed to high water temperature in the Sacramento River below Keswick Reservoir in late summer 2014. Another contributing factor to the 2014 brood year demise was high flows during spawning (June-July) followed by low flows at emergence (September). 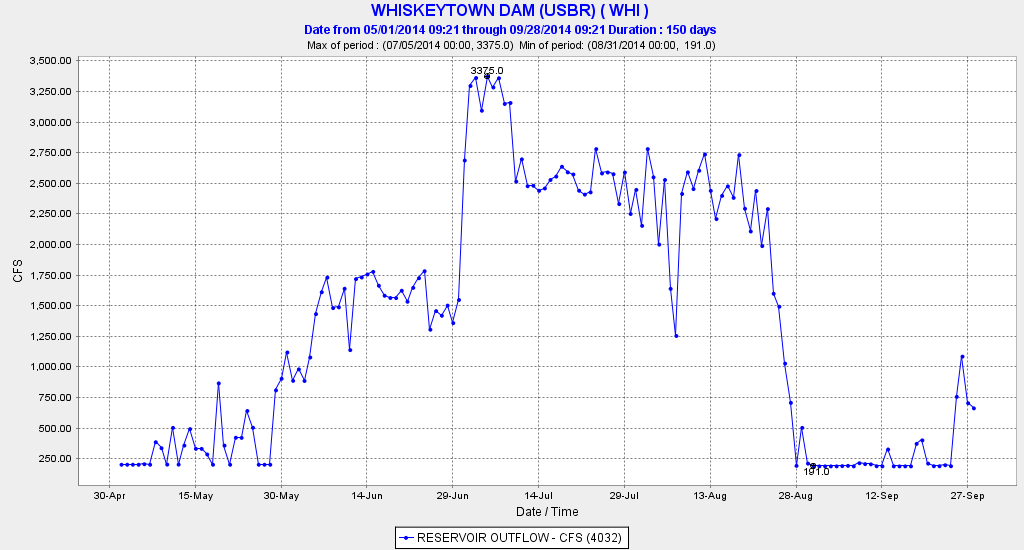 The reduction in inflow from the Trinity in 2014 contributed to Winter Run redd dewatering and higher water temperatures in the Sacramento River near Redding in 2014.