Delta Smelt are virtually extinct from the Bay-Delta. Few have survived the extreme conditions of Delta operations during this fourth summer of drought.

The catch of Delta smelt in the early June 20-mm survey for Delta Smelt was fourteen, twelve in the Sacramento Deep Water Shipping Channel (Figure 1). This compares to the record low of 22 last year. The plots for the early June survey for the past four drought years are shown in Figures 2-5. Obviously the numbers are down even from last year. The main difference is that only one was captured in the low salinity zone (in Sacramento River channel on north side of Sherman Island). This zone of brackish water, generally with cooler water and high productivity, is again in poor condition due to lack of freshwater inflow from weakened water quality standards during the present drought. The effect of weakened standards in 2014 and 2015 (4000 cfs Delta outflow instead of 7000 cfs) is quite evident by comparing these last two years with the previous three drought years when standards were not weakened. 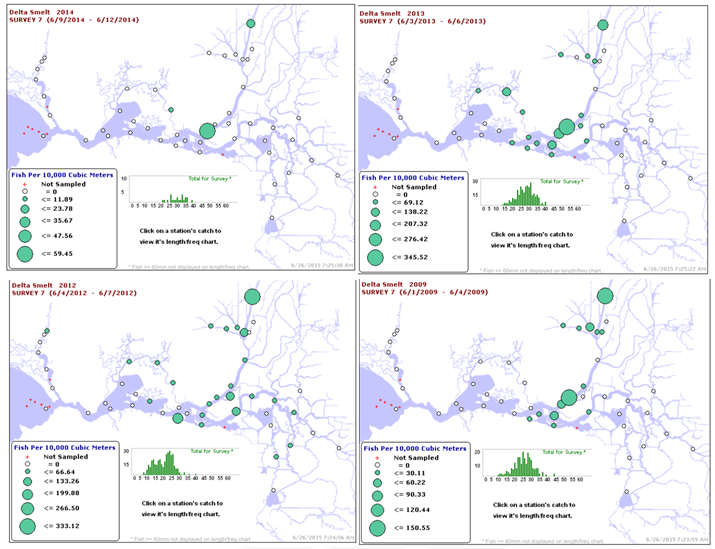 The July standard of 4000 cfs Delta outflow was also weakened to 3000 cfs. The lower outflows lead to a smaller, warmer low salinity zone (further upstream in the hotter Central Valley away from the Bay “breeze”). In addition, under lower flows, more of the low salinity zone is drawn into the central Delta by Delta exports. Surveys #8 (late June) and #9 (early July) each captured only one Delta smelt, as compared to 20 and 2 in the respective surveys in record low 2014.

The final 20-mm Survey in July and the July and August Townet Surveys only caught one Delta Smelt each. Both fish were caught in the Sacramento Deep Water Ship Channel (same site as large green dot in Figure 1). None were captured this summer in their normal nursery grounds in the Low Salinity Zone in any surveys. The poor prognosis for Delta smelt has been downgraded to miserable. For previous recommendations on improving conditions for Delta smelt see a previous post1.